Welcome back to the second official Situation Zero Media Update!

In this update, we'll discuss the fact we finally have our own ModDB page, the air units which will be available to the GLA and it's generals, as well as the capabilities of those aircraft. Each unit has a video demonstrating how it will function in-game.

Anyway, have fun reading this update and feel free to criticise on anything you like or don't like. Criticism is always a good thing we appreciate, and whilst we may not comment on your comment, we do read them and take them into consideration.

"For years, GLA troops fought naked without air cover, simply handing over air supremecy to the enemy without even fighting for it. While GLA soldiers are told that "aircraft are for cowards", in reality, GLA just didn't have the technology and funding to have a proper air force, with the most advanced aircraft in their hands being badly-maintained four-engined cargo planes. The Americans and the Chinese enjoyed this, often annihilating ground forces with ease. This all changed after war broke out between USA and China; with armies redirected away from the GLA, they were free to expand. After convincing several rich Arab countries to fight for their cause, and plundering those which refused, the GLA is slowly assembling an air force, while still inferior to both the American and Chinese, but at the very least GLA troops won't be fighting naked again."
So you may be asking, why is a thing that is so widely thought of as a bad idea be implemented into Situation Zero? The most straight-forward answer is the fact that we made aircraft actually worth using now. Building an Airfield first in some 1v1 match-ups is just as useful as a War Factory. If GLA is still landlocked, then even with Tunnel Networks they would be inferior as a whole. While adding an air force, it is considered that GLA definitely should not go air-heavy, so generally, it is less accessible compared to the American and Chinese versions, and overall just strong enough to be useful. Expect even more air-to-air dogfights, bombing campaigns and tactical air-strikes with this addition.

Today we are proud to open up our long-waited ModDB profile with several in-game screenshots never seen before. We have also included all contents of our earlier media updates in the profile. Enjoy looking at the Situation Zero official ModDB page by clicking the following logo: 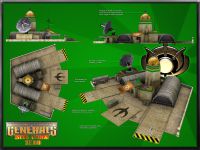 
"After assembling an air force, an Airfield close to the battlefield becomes a necessity, otherwise the impact of a new air force would be minor. Lacking military knowledge about using aircraft, the design is not as sound as the American and Chinese counterparts, but it is cheap, just the thing GLA needs. The hangar itself is essentially a bunker, providing excellent protection to the aircraft inside, although there are only two available. It lacks a typical control tower which is filled with advanced systems, instead, the personnel use little more than binoculars and basic radios to guide aircraft to their landing."
The Airfield is pretty much a self-explanatory structure. It obviously is the place aircraft are produced. As a measure to lower the accessibility of GLA's air force, it only has two hangars as opposed to the typical four, while still occupying pretty much the same space. 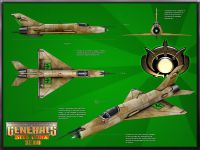 
"Available in abundance from storage facilities all around the world, the Fishbed has become the primary choice for the GLA with its relatively high value-for-money. Although not as blistering fast as modern jets, it is incredibly agile, coupled with two powerful flak cannons used for dogfighting, making it incredibly effective against jets decades away in technology. For ground attack, it is armed with ten unguided rockets, similar to rocket pods, just without the pods, giving it a certain World War II feel. The Fishbed achieved a state of infamy during the Vietnam War, easily rivaling the aircraft Americans used back in the days, the F-4 Phantom. While the Vietnam War is long over, its name lives on. "The deadly granny", as American pilots like to put it."
The Fishbed is the GLA's basic jet fighter, roughly equivalent to the American Raptor and Chinese MiG. It has the deadliest dogfight weapon in all three of them, flak cannons. So even though it is slower and has less armour, it is a competent fighter not to be underestimated. Its rockets may not be the best, but it has it uses, and can be upgraded late in the game to do more damage and have anthrax-tipped warheads. 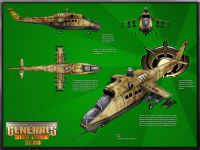 
"In addition to a fighter, the GLA has also acquired an attack helicopter that is also able to fill in the role of a transport helicopter. Like the Fishbed, it is also available in abundance from several ex-Warsaw Pact countries, Arab countries, many others which use Russian technology and the ex-Soviet Union, Russia itself, which recently suffered from bankruptcy, making arms export its primary source of income. The Hind is armed to the teeth, having a nose-mounted auto-cannon, a flak cannon near the cockpit, four rocket pods and four anti-air missiles. It is very popular in the GLA ranks, being sort of a guardian angel, destroying the infidels and ferrying soldiers to safety. It is still not as widely used as the Fishbed with its higher price tag, but enemy commanders should rightfully be watching out for them."
The good old Hind, the perfect helicopter for GLA. Yes, it transports infantry, making it even easier for GLA to spread across the map, considering that transporting the Worker is possible. The Hind will be a late-game unit. There's two reasons for this, one, it is too powerful for early game use, two, making it early game will let GLA be the ultimate camper, building impenetrable forward defences quickly. Like the Hind, it is capable of being upgraded to do more damage and have anthrax-tipped warheads for the rocket pods. Gameplay-wise, it does indeed feel a little like the Helix, both slow but powerful beasts.

Special thanks to gammagamer, whose topic sort of reminded the leader to work on this update. This concludes our update. We are also still looking for new team members, especially modellers and skinners, as most of the work is currently done by the leader. Delegation of work is important. Those interested can contact JJ.

at last!! an update. that hind there looks great! will it have some upgrades?

hm, same as always. why can't GLA have high tech weapons when a majority of them are israelis, iraqis and arabs?

well, as it is the GLA. the GLA by themselves, are a terrorist group, specialising in hit and run tactics. Very few mods have given them high tech weapons, as they are terrorrists. they obtain things via the Black Market,

They're not too much of a terrorist group any more as to a multinational militia, so they do have higher tech than in ZH. But, I decided that they should have that old-ish feeling to it, so tracking AT missiles are out.

Also, you mentioned Israelis. Well, they're the only really high tech ones, as in, create their own tech, but then, GLA being more Arabian in nature probably, is pretty much Israel's mortal enemy.

i just LOVE the airfield!