In the first media update of C&C Generals: Situation Zero, we will show you a new general with three of his new units, as well as a new map. There will also be some description about what we plan to change.

You might have given up the game and buried the whole mod in the ground? With pleasure we can state that you are totally wrong. We are still here, alive with you, ready to continue our battle for better designed Command & Conquer Generals which was left unfinished. Dear soldier, this is our day, your day. We are proud to present our first media update for Command & Conquer Generals: Situation Zero! In this update, we will describe Situation Zero development progress overall and also show you one of the new generals, and three of his units, as well as a new skirmish map.

EA Games didn't put much effort into Zero Hour expansion pack, as seen from the messy command sets and lame general ideas. We, however, have tried around to patching up the game's flawed gameplay. One example is the Nuclear Missile. Before, it was the worst of the three super weapons, yet it had the longest count-down timer. Aside from graphical changes, we have also made it so that it can finally kill off those pesky GLA Holes.

One profound gameplay change is air-to-air combat. Before, you only find it once in a while when you have a Raptor and the enemy is coming in with a Helix. Now, there should be more of it. For that, fighters will use guns with unlimited ammo, while retaining their anti-ground capabilities. Aside from that, many of the units previously under-used have been buffed, like the slow as snail Battlemasters, the generally redundant Sentry Drones and the novel but useless Combat Bike.

We also did several overhauls to the overall strategy. We adopted a few of the balance changes as seen from the community patch 1.06, the most influencing being the multi-point General's Promotion system. Basically, you are given more points, but the abilities cost more now, with more useful ones cost more. Stealthed units now function better at espionage as base defences no longer detect them. Only detectors specifically designed for that, like Listening Outposts, Radar Vans and Sentry Drones can.

Not to be missing are new effects. In Zero Hour, most looked unspectacular. In Situation Zero, almost all of the effects are modified in one way or another, giving a much better overall look to the mod. New models and textures made have strict quality control, so that they will be at least on-par with EA made ones. As you know already, the in-game UI is given a massive overhaul, and looks much better now. In addition, we have decided to improve current generals seen in a revolutionary part in Zero Hour expansion pack. Next, we present a new general and some of his special abilities. 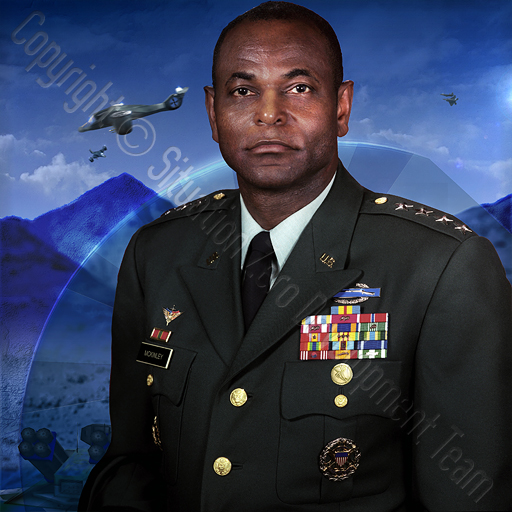 "General McKinley is a 4 star general in the US Air Force. He first joined the USAF when he was amazed by all those fancy aircraft as a kid. He has a great passion for flying, and is a great strategist. Before long, he gets promoted to a general. He is now the successor to General Granger, and inherited all his work. Unlike Granger, McKinley puts more emphasize on ground units, as having only aircraft isn't the best way to go. He learned that with the recent disastrous US campaign in the Middle East, as GLA's guerrilla tactics made his aircraft effectively useless. Although the USAF is still the most potent in the world, the fact that they required an airfield to ensure combat readiness limited the overall effectiveness of the pilots. Hence, under General McKinley, parts of the USAF commanded by him was revamped in every possible manner. Even still, he specializes the popular US strategy, Shock-and-Awe. It includes a prolonged aerial attack and artillery bombardment. After the enemy's defences have been destroyed or at least temporarily degraded, a ground-based push, supported by attack helicopters, is launched. After the initial attack, the ground forces will then stay to hold the ground, as aircraft can't do that. Although more research has been done on his ground units, they are still relatively primitive, and can't be held off with ease without aerial support from friendlies."
In the unmodified version of Zero Hour, General Granger was really overpowered, with seemingly indestructible aircraft, as their lasers just chew up any missile that manages to get near. In addition to that, they still have a very good amount of armor. This forced the enemy to just spam anti-aircraft units, resulting in a game that is lame and not entertaining. To fix this, the lasers are removed, and the armor on most aircraft is revised, which indeed sorted out most of the problems. A few viable ground-based vehicles have also been added. They may not be as advanced as vehicles seen in other parts of the US military, but they get the job done. We are proud to present these units.

"Originally developed by Canada to provide short range air defence and some degree of anti-tank capability, since then General George McKinley saw the value of it and began to install it on modified M113s, re-designated to M113A4. The modified version is easily identifiable with its re-designed front for increased ballistic protection. It proved very useful in his arsenal, as there were no tanks before to effectively deal with threats from enemy anti-air systems. The Predator is predicted to serve in General McKinley's army for a long time to come."
The Predator can carry five infantry, and has a missile system able to target ground units only. It is quite speedy, and does a good amount of damage, but does not have much in terms of armour. It is vital to General McKinley as Humvees are removed for him, and this also functions as a main battle tank to some degree, destroying enemy anti-air vehicles.

"As the Tomahawk is phased out from McKinley's army as he considers it obsolete and unsatisfactory, a replacement is soon needed. He needs something that can suppress the enemy effectively. He then contacts a few major military vehicle manufacturers. After extensive testing, a design with the best properties is chosen. In combat, the Lancer proves to be better than the Tomahawk in suppression, as its shell can't be shot down and it has a higher fire rate. Even so, they are both weak and slow, and thus deserve the utmost protection. The Lancer has only been authorized for mass production only recently, so there still isn't too many of them currently."
The Lancer, as stated, will replace the Tomahawk, and function as General McKinley's artillery. It is not as fast as the Tomahawk, but it does more damage, and is better protected against enemy fire by a slightly superior armour. It requires a General's point to unlock, and may well be worth it.

"Following the successful experimentation of high caliber autocannons originally for use for Raptors, General McKinley has an idea of putting it onto a ground-based vehicle for a new anti-air system. Based on that idea, the Slingshot is conceived. Armed with three autocannons and a missile launcher, it is death to any hostile aircraft. The weapons system is mounted on an enlarged chassis of the Crusader, giving it decent mobility and protection. Although designed as an anti-air, the Slingshot can use its autocannons on ground targets. The Slingshot is a machine so fearsome that even the best pilots in the country fear them, even if they only face them in combat simulators."
The Slingshot will replace General McKinley's Avengers. It does less overall damage than the Avenger, and is slower, but it has better armour protection. It costs more than an Avenger, which received price cuts in our mod. Like the Avenger, it does not require anything to build. It can use its autocannons against ground units, and is particularly deadly against infantry. 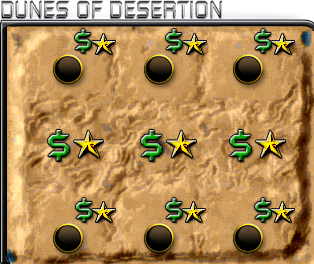 Dunes of Desertion is a 6-player Team-Based 3v3 map designed in a symmetrical tournament-map styled fashion. The amount of supplies on this map are around medium to high, about the same as Defcon 6. It is based in an unnamed desert. The map is quite large, being more than twice the size of Twilight Flame, if not thrice. The name of the map was derived from the fact that the map is both a desert and the fact that the majority of the map exists out of dunes. The map is huge. This means it's easy for any GLA faction to spread out and tunnel without any interruption. This also means that air power plays a more important role as they are fast enough to cross the vast terrain quickly.

Thank for your attention. That's all we have to show you for this update. We appreciate any comments and criticism from you all. There is also a short note that some units that you saw in the old trailer, like the majorly unfitting Kirov Airship, were cut, but there still a big possibility of most of the more memorable ones to resurface some time later. Stay tuned!