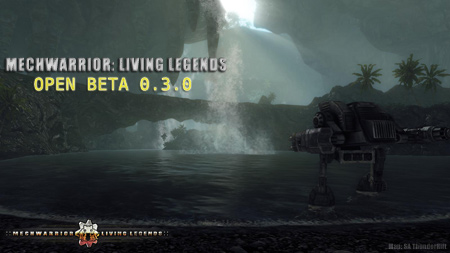 This release brings together an array of balance updates, bug fixes, new features, gameplay modes and performance enhancements to provide a reinvigorated gameplay experience for the player.


A big thank you to all of our fans for your continued support of MechWarrior: Living Legends!I’ll see you on the field!

Balance
- Almost every weapon has been rebalanced using the new internal balacing tools.
- Armor across all vehicles has been rebalanced as well.
- All vehicle variants adjusted to match perfectly to improved tonnage rules. Be warned these are not CBT, but are now strictly adhered to.
- Prices on weapons tweaked, more to come later.
- AC10's and AC20's are now automatic firing weapons.
- Ultra AC's now have a significant jam penalty when overheated.
- All tank's have had the their movement params tweaked.
- AMS now only focuses on 1 salvo of missiles at a time.
- AC10's and AC20's now explode after a certain range
- Increased repair costs.
- Increased maximum flight ceiling of aerospace to 1500m.
- Damage has been tweaked across the board to increase average combat time.
- Reduced order of magnitude on scores.
- Slightly reduced C-Bill accrual rate.
- Cockpit now shakes significantly when jump jetting in a Mech.
- BA view screen shakes slightly when jump jetting.
- Gauss projectile speeds increased.
- PPC projectile speeds slightly decreased.
- AC2/AC5 ranges slightly decreased, now inccur linear damage drop off after stated max range.
- AC10/AC20 inccur damage drop off after stated max range.
- Hawkmoth B reconfigured to hunter killer loadout.
- More than we could possibly listed here.

Bug Fixes
- Fixes for most Light Mech leg animations.
- Fixed out of combat area ceiling height on Inferno.
- If buying ammo for a partially empty weapon the player is only billed for the missing rounds (partial tons).
- AMS is now repairable.
- Aerospace manuverability is no longer frame dependent.
- Fixed vehicle heat damage behaviour.
- Fixed ejector seat not disabling after use for owner of the vehicle.
- Improved joystick support.
- Buying at an APC now also works when connecting to the server after the APC was spawned.
- Hovercrafts now have functioning boost with no overheat effect.
- AMS now stays on one Arrow IV if multiple missile instances are inbound.
- Fixed Mech landing sounds sometimes not playing.
- Fixed destructible trees demanding too much performance.
- Fixed pilot positions in a few mechs.
- C-Bill transfer dialogue and controls do not change weapon group assignments.
- Fixed Test of Strength prices.
- Fixed bug in BA jumpjet effect that caused a CDT.
- Fixed bug which caused weapon reloading not to be correctly displayed on the client.
- Improved Novacat leg animation & performance, *not final version.
- Fixed extra ton of ammo exploit.
- Bomb sight is now more accurate, lateral momentum still not accounted for.
- Fixed bug which caused a VTOL/aerospace to be stuck in hangar structure after spawn.
- Fixed a bug which caused the Harrasser to be stuck in water sometimes.
- Fixed bug which caused damage not to be transfered from the backtorso to torso when backtorso was destroyed.
- Fixed text on HUD grenade indicators and in Buy menus.
- Fix for NARC beacon not being removed after destorying a target.
- Fixed jumpjet percentage indicator.
- Players are not longer able to enter enemy APCs.
- Fixed BA drowning to death after 2 minutes.
- Wire guided weapons such as MRMs actually travel where they say they do now. Still affected by TAG & NARC.
- More than we could possibly listed here.

New Features
- Changed behaviour of ammo quick buy key.
1. Buy ammo for all empty / partially empty weapons
2. If there is only one weapon that needs ammo, that ammo has purchase priority.
3. If there are multiple weapons that need ammo, buy ammo for that weapon selected in the firegroup manager.
- Added possibility to limit player / team respawns with Tickets in Solaris Arena and Test of Strength modes.
- Added HUD display for player / team tickets (if team tickets are inactive the ticket display is used for regular team score).
- Added server variable so that limits teams to IS and Clan assets only (aka "IS vs Clan" mode).
- C-Bill transfer disabled during combat (damage taken), 2 minutes after suicides and reconnections.
- APC owners are now rewarded with 5000 C-Bills for every BA that spawns at their APC.
- ECM and passive radar now increase lock time for missiles (passive and ECM delay effects will stack)
- Added three state radar detection:
1. First state (between 60% and 100% with no line of sight): You only have a blip indicating a valid target and distance.
2. Second state (less than 60% radar range while active with no line of sight): You gain knowledge of the target's class.
3. Third State (less than 80% radar range with line of sight): You have all available information.
- Radar information is cached (but not updated) if you go out of range while targeting.
- Cached target data will show as "Outdated".
- Refactored LUA/HUD code to allow for easy implementation of new game modes.
- C3 broadcasters now receive money for transmitting new targeting information to team mates.
- Now possible to sell vehicles back at the Mech bay / aerospace hangar / VTOL pad, aero hangar. Default key 'J' while still in vehicle.
- When first repairing and then selling your mech you only get the C-Bills for the value of the Mech prior to repairing as it would otherwise be an exploit otherwise.
- Added posibility to limit buy options for a factory (not currently implemented).
- You can now repair aerospace on the runway.
- Betty events are now queued and no longer overlap each other.
- Non-destroyed Mechs without pilot now stay a lot longer on the battlefield.
- Improved landing performance for aerospace units with a "flatten glide path" feature, default key is 'L-CTRL'.
- When crouching, Mechs gain a higher pitch elevation limit to aim at airborn units. Four Mechs receive a base additional elevation bonus and are AA mechs.
- The firegroup manager now remembers the firgroup assignments depending on vehicle and variant. No need to reset them all the time anymore.
- Added crouch, shutdown, AMS, overheat, deploy and C3 indicators to Mech HUD.
- Changed night vision shader with custom configuration.
- Long Tom has now to be deployed before it is able to shoot. Deployed via 'L-CTRL' as default.
- When buying a second BA weapon and the BA small beam laser is still in the inventory, the BA small beam laser is automatically dropped.
- New chat system & killog font.
- New Spectator HUD overlay.
- New damage display icon for tanks,VTOLs and aerospace.
- Internal structure for the Uziel.
- New HUD indicator when overheating.
- Radar ranges and active / passive / GECM state is now shown for friendly units on the overview map as ring indicator.
- Legend on overview map to distinguish all the new symbols.
- Streak SRMs now have more unique firing pattern.
- Heat warnings in HUD overlay.
- Numerous other small features you may or may not notice.

Known issues:
- Inverting the joyaxis_y on vehicles does not work.
- Implemented impact sound library is only valid for LOD0 detail (only plays out to about 20m) but is sufficient for first person damage impactor notification.
- Impact libary will not play for impacts to Mech legs, tanks, aerospace or VTOLs, will be fixed in a later version.

You had to release this on the very same day I uninstalled Crysis, didn't you...

Let me go get it installed again...

It's worth it though!

I love earlier versions of this mod and can't wait to try the new version out. Downloading right now :)

By the way, great timing. Crysis Deal on Steam ;)
Store.steampowered.com

Any gameplay vids of the new mechs in action?

I'm having a problem here...

I downloaded it a few hours ago, and went to install it. It's now saying that I have modified files and that I can't play until I revert them, even though this is a fresh install.

EDIT: This is a fresh LL install. Beta 0.1.0 never existed on this computer. Unless it somehow survived a hard-disk wipe.

UPDATE: Well, for no reason whatsoever, fourth install did the trick.

zomgz LOKI!!! You guys are my heroes!

Seems like I purchased crysis on the right day :D Can't wait to play guys, great work, keep it up!

I already downloaded 0.1.0 but had no time and patience to setup the controlls and everything. Now I finally had and it's great :D !

Btw I just got bombed out of my madcat by an aircraft. This also bombed me out of the game. Most funny crash I ever had ^^

"Firebombs hit so hard they knocked you off the Internet!"

Had a very similar crash after being destroyed by an aircraft.

Nevertheless, awesome gameplay so far, had tons of fun :)
Gifted Crysis to 2 friends and now the mechs will burn :P

what is the latest crysis patch , i get version mismatch with 1.02

I noticed there are a few mechs from the mechassault series in this (ie. nova cat, uziel) so is there going to be mechs from all the mechwarrior games?

will this come with a simple install application where everything is taken care of and all i have to do is start up the game. would like to check it out but had problems installing the first version, then another patch, then instructions, you guys should take care of all that mess in one application installer.

has this version made it simple to install?

From 0.3.0 forward we have a complete installer package and a corresponding launcher utitilty that ties in both game setup options and the Actionmapper utility.

It'd be cool if it used the Clan mech names when playing as Clanners and the IS names when playing as IS. I know some people would say that's needlessly confusing, but that's the whole point. In my opinion stupidity isn't something that should be encouraged. Making people learn the names for each side will make it more immersive, and it'll make people pay more attention while playing.

I guess I need to get on steam and shell out the money once and for all.

If only this wasn't on Crysis. I.E. UE3, it could be standalone. God I'd get into that.