It's June! It's sunny and we should be outside running around but we're not. We're inside making videogames and there is a lot to show you. Get in here!

Welcome to our summer house. The air conditioning is non-existent and the weather humid and sticky but at least we don't have any mosquitoes to bother us. No it's so hot even they have decided to stay in with a nice ice cream and take it easy.

But not us! Oh no May was a very busy month and June looks to be just as busy again. Such is the life of a games developer - cursed to stay indoors all year round and sit down for a living.

First up we have a new videogram showing off all of our lovely new bits and things.


As you can see there has been much progress in the realms of graphicsosity with a new background and all new enemy art.

Speaking of new enemy art there are 2 new enemy types: The Virus and the Atom.

The Virus is a largely benign enemy content to just stay put. It won't bother you directly but once you've got one of them you'll pretty soon have 6. Then 18. Then 36. They tend to run out of energy after a while but left unchecked they can take over most of the arena. They don't give any XP but they do so get in the way.

The Atom will just tend to orbit the point it was spawned at rather than hunt the player down like the Orange Ones or explore the arena like Pink Ones (Our enemy naming department is only recently formed and hasn't yet gotten around to naming our older enemies yet). Atoms will get in your way as you flee the Orange Ones and if shot their electrons will hang around taking up even more space and being small and hard to spot.

In addition the player has been imbued with some wonderful new powers to complement their time-slowing abilities.

The first of these is purely defensive: The Shield. It takes a few seconds to charge up (longer if you're firing) but once it does you're invincible! Until something hits you. Which is a bit like being invisible so long as nobody looks at you. The Shield however will give you a second chance if enemies get too close as when you lose it the released energy pushes away nearby enemies giving you some breathing room. It's a good time to use your Slowmo to train your guns on those upstart baddies and show them just who's in charge!

The second is known as a "Chain Frenzy" and is responsible for all those numbers you see flying up out of dead baddies. Every kill you make in a row builds your chain multiplier giving you more points. However it doesn't end there. Keep a chain going and the built up excitement just has to be released as a burst of psychedelic death killing every enemy within range - the so called "Chain Frenzy". The best part? The kills count towards your chain and if you happen to take out a big cluster of Viruses with it then your score is only going to benefit.

Not everything that was worked on this last month is on show just yet. There are some more enemies in the works that aren't quite ready for prime time and a lot of work went into invisible things like changing the spawning and balancing the difficulty. If you want to keep up with all the experimental stuff that goes on then you should follow @SquidInABox on the Twitters where you will often find some screenshots that never make it here of super secret experimental thingies!

I shall leave you now as I must get back to sweating and cursing the sun and it's damnable hat. As a parting gift here are 4 of the 9 new screenshots you will find in the gallery. 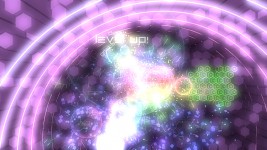 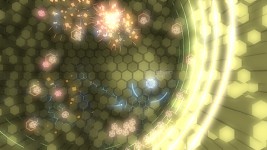 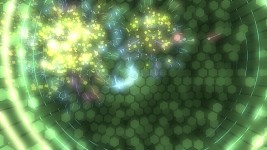 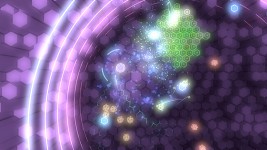 Wow. My eyes burn. In a good way. Might want to put an epilepsy warning on your video there. :P

It looks like good fun, however, I see no mouse indicator (if it's mouse controlled?) nor really any indication of which way you're pointing, except when you fire. To me this always proves to be a difficulty. Is there going to be something that indicates direction?

If you are playing with mouse and keyboard then you get a cursor and laser sight. The video and screengrabs were taken playing with a controller though which doesn't require such stuff.

Nice progression since last time I saw this game, I can't resist to post about this:
"cursing the sun and it's damnable hat"

Is it a tophat? And it's damned indeed.

Just wondering, could this be a console game too? It'd go great with PSN and XBOX Arcade. :)

awesome!
I have an idea for another gamemode or sth:
you have levels, if you complete one, you go into the next. simple? yeah
but you can imagine yourself in a big tube, and when you clear one level, you go "further into" the tube, so you wander through different parts of the tube
nothing really special, but it could be some fun if you want to try to get to the next level, and maybe like every 5 levels there comes a boss (maybe you can see him already in the background when you are still some levels before his stage)
much like the hacking in ratchet&clank 3

i'd recommend toning down the bloom abit. I actually found your earlier gameplay footage easier to read.

Wow, this looks awesome!
Really simple but clever looking :D
Love the music that goes with it as well.

Reminds me of SUPER STARDUST HD for the PS3 :D