The game’s release date has been revealed as Holiday, 2011.

Following a premature reveal on Electronic Arts` online store, Mass Effect 3 was officially unveiled via a brief trailer: “Two million dead in the first day, another 7 million by the end of the first week,”. On screen, a sole sniper is seen bearing down on a target–the same sniper that had been seen in leaked screenshots from developer BioWare.

“Every defense annihilated, all our forces on the run. Regrouping…somewhere,” the voiceover continued, showing the sniper leaning out a shattered window.” Reports are coming in from other major cities It`s a well-coordinated attack, and so far it`s been damned effective. Don`t know what they are, what they want, or where they came from only one thing is certain–if Shepard doesn`t bring help soon, there won`t be any earth to save.”

The camera then cuts to show that the sniper is in Big Ben, the bell tower of the British Parliament. Meanwhile, across the London skyline, numerous Reapers–the sentient mechanoid spaceships which were central to the plot of the first Mass Effect, are descending, wreaking havoc. 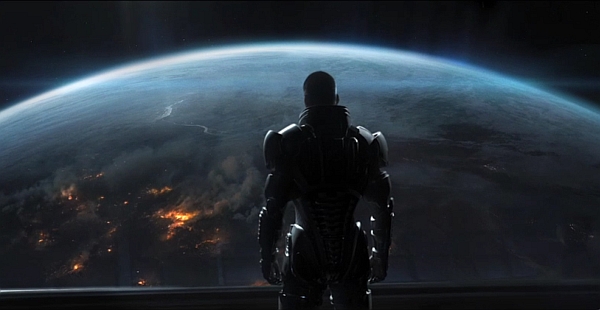 The screen then showed that Mass Effect would have a release date of holiday 2011. Though no platforms were mentioned, the EA Store leak had the game as being released for the PC, PlayStation 3, and Xbox 360.

hell yeah, and you aren't the only one :P

london looks like today. makes me wonder in witch year ME takes place.

not really. Only big pen/parliament building looks like today and it's safe bet that such a landmark will be left standing in future.

And the London eye :D Plus you only see south of the river which doesnt really have many famous landmarks

This is what London's gonna looks like if those ******* elitist politicians continue to ignore the people...

Codex says which year ME is

So true bro, Bioware sure knows how to make games!

Has Bioware ever made a game that's bad?!?! i don't think so!! I cannot wait for this game to be released, I've already emailed all my friends this info... yay!

PANIC PANIC WERE ALL GOING TO DIE

i can feal my cest ma hart stopt

So whats Mass Effect 3 supposed to be? If its a shooter or rts then i'll buy it! If its any other then i'll forego it...