A couple of new screenshots from the early sections of the mod, plus a shiny new website!

It's been a while! Sorry about that. We've been working away at Neptune reasonably solidly, and, slowly but surely, everything's starting to come together a little bit.

Firstly, some bad news. We had a meeting a couple of weeks ago and decided our provisional release date of "Spring 2009" is no longer feasible. We are now tentatively aiming for a "late Summer" release. What's important to us is that we don't rush this. We could probably spend another month on the mod and have it playable, but who does that benefit? We want this to be really good, and we're prepared to put in the extra time to ensure this is the case. Hopefully you're on our side with this.

At least we have a bit of something to show for our efforts. Here are a couple of new screenshots. Both are work-in-progress. One is from the very, very beginning of the mod. Literally a few seconds in. That's why it's all bright and sunny and docked, and why there aren't any crazy horrible foes lurching about. The second is a short while later, after everything goes a bit wrong and you find yourself clambering aboard that mammoth Neptune Ocean Liner. In other words: the ship's foyer. 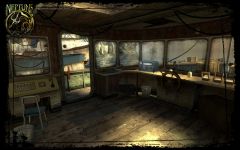 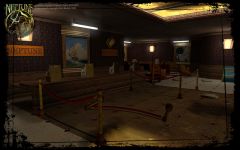 Our brilliant sound designer Jesse Harlin has, in addition to making noises into a microphone and twiddling knobs to make them sound good, been slaving away on a wonderful website. It's pretty much finished now, and you can go and have a look at www.neptunemod.com! We're still tweaking little bits and bats, so do go easy on us until it's all functioning smoothly and in line with this here page.

Oh, and the captain's written a new entry in his log. I wonder what on Earth he's talking about...

Right. Back to work, then. Let's try figure out where this bloody leak is. Serves us right for setting the game on a delapidated ship, eh?

All the best, chaps. Onwards!

Why announce a release date of spring if you don't know if you can hit it?
Just let's the fans down.

Wait till your confident you can hit the date, so no one waits till late summer and hears another delay.

A bit more practical you see.

The release date was always provisional, and we always made that known. The new one is extremely tentative as well, but announcing a rough timescale gives us a focus to work towards. We hope not to let people down again :)

yeh, at least i personally like to hear even rough release dates, even if they do get delayed, means I have a time to look forward too, as apposed to just waiting without seeing the end.

Excellent screenshot. The mapping, lighting and textures look brilliant. And, I agree with Craziestdan, best not to give a release date or season unless you know you only have a little clean up work to do and minor bug fixs. Top update guys...

Excellent work - but your web-site's navigation doesn't work properly in Opera. Still, summer isn't that much later than spring! :D

Will mention this to Jesse and try get it sorted asap. Cheers for the tip-off.

Here is a screenshot of Opera view viewng the site:
S5.tinypic.com
it seems to work for me, cna you elaborat eon the problem?

im really glad to hear how ur putting quality above all,nice to know. by the way awesome media!!!!

Im not sure if its something on my end, but I just tried to register on your forums using a gmail account and got this error: "the entered e-mail domain has no valid MX record". This was after using Google Chrome and Firefox. Maybe your site no-likey Gmail?

Will check this with Jesse as well, and report back.

It can't be that, I signed up with gmail.

that odd, because I use gmail myself and I'm the admin.

I'll have some known good gmail accounts try to reproduce your problem. I'd try again, as it may have just been 'sunspots' (read: mysterious intermittent problem).

Love whta you guys are doing. And cant wait

Feed me more screens like these :D
Looks very rusty, how it should be though.
Keep up the good work.