X32I is now a standalone Indie title powered by the Unreal Engine 3. We are also taking a look at a few of the assets, captured from within the engine it self.

March Update:
First of I apologize for the silence from the project in the past 2 months, the team including my self has had some major life issues, as well as the huge changes to the project required some time to think and plan.
UDK:

Why the UDK? Well that is easy to answer, due to the limitations of working with the Cryengine 2 and the kind of game we wanted to make, we needed a new engine that would suit our needs.


The UDK is a flexible engine that's constantly updated with new features, and is a robust engine that has been used in many many retail games.

Here are some of the reasons we have switched to the UDK:

So as you can see the UDK was the obvious choice. The cryengine 2 served as well, but ignoring the UDK would be insane considering what it offers.

These are taken from within the Unreal Engine 3 it self, these are not renders, these are in-game models. 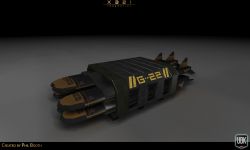 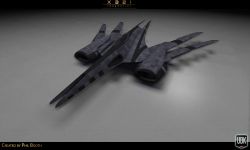 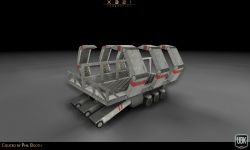 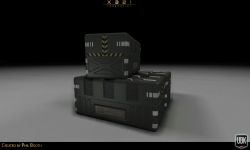 If you see any videos of X32I currently online they are from the Cryengine 2 version of the project, it is now a standalone indie title on the UDK, and while there will be videos in the future, it may be a little while before any surface.

I hope you like what you see, and we hope that you continue following us as we aim to create the best space-sim in recent years, because this is one genre that's been seriously neglected for far too long.

but UDK means it gets to be standalone and thus reaches a broader audience, something that is critical to indie devs.

Exactly, you want to reach as high as a market as possible, limiting your self to one area is suicidal for everyone involved with the project.

Don't worry so much guys, just because it's UE3 instead of the CE2 doesn't mean the quality will go down.

Will you guys be able to achieve the same level of quality as in the CE2 scenes with the volumetric light (god rays) and dynamic lighting? If so them good if not them is a shame it was what made the scenes look so fantastic.

By the way, i personally, am tired of the UE3 engine looks and i hope you guys can be able to diferenciate your selfs from all UE3 games out there, good luck and good work.

but it does mean the quality will go down.

quality will go up not down.

Except Anti-Aliasing will go down.

Not if you have a Nvidia card and nhancer.

Why would you want to make the player have those? I have an ATi and I can run crysis on max settings.

and I was hoping for an epic space battle on CryENGINE 2 :(

Cryengine 2 or UE3, at the end of the day it will still be the same game. CE2 is not without it's own limitations.

I think this is a great move, good luck on doing this.

Thanks, Phil is a really talented concept artist, modeller, texturer. The guy has no limits :P.

Odd. I was under the impression the CryEngine 2 standalone mod SDK was just released? I thought that meant you could do the same thing as UDK but with CryEngine 2, and sans the ability to sell it.

Pretty much - but quite frankly, I think most would rather sell their product than not, particularly with the time they've put in. Its one of the many things that influenced my team switching. :P

Good luck guys, i'm looking forward to seeing what you come up with.

Aye, true, but as they didn't put on their list, I would hope they're not leading people on with "Mod... Mod.. Mod... Oh wait we're going to sell it, sorry."

It's great that modders are getting the chance, yes, but suddenly a large amount of great mods have been going commercial, and I mean, the sentiment often uttered by people is "I bought 'x' game so that I can over 9000 mods to play free!" but it's looking like it's not going to happen anymore.

This isn't a MOD and I've never lead people on with it, if people would listen to the developer blog, they would know that isn't planned as a free release.

The fact is the days of huge mods are going to get more rare, because people expect mods to match retail quality level, and for a team with no budget that's almost impossible, without sacrificing a whole lot of time and effort.

If you are going indie them that is another thing, i was desapointed by the engine change, but now i understand why, so that said, i hope all the success for you and that your game sell like cakes so you guys gain the money to buy the engine this game truly deserves, CE3.

Trust me if we had the money we would be using CE3, but we don't so we use what is available to us. :P

Not sure what developer blog you mean, I've only been following on ModDB, maybe I missed something, but it was always listed as a Crysis Mod, and unless you merely had it under that heading for a temporary measure and intended to eventually license CryEngine2, a mod was what I understood it was.

Yes, NOW it is under UDK and indie, but it WAS a mod, was it not?

Honestly, I'm not trying to be insulting, but I was saying it WAS planned as a free release, as a CE2 mod, but now is an indie UDK title, which mean it changed.

will it be a indie game or
is ut3 gonna be required?

You do realize, though, that I've bought Crysis partly because of your upcoming mod, don't you? Now you owe me five bucks ;)

Ah, whatever... looking forward to its release anyway.

Wait, it's not on Cryengine anymore?