What's been happening? What's new? Voxel Turf is a city builder where you can live in, drive around and blow up in the city you build! Here is an update containing the new trailer and an overview of the the additions and changes since last time.

There's a new trailer ;) Check it out below!

For people looking at this game for the first time, here are the key features:

And Now the News

Good news everyone! The game is finished and coming out very soon! I've been working underground as I wanted to be 100% sure the game is ready for release. The truth is that I bit off more than I can chew for this project and it just took time to digest properly, but fortunately its ready now.

I will announce a precise release date next week but I will say now that it will be out in about a month.

Here is a quick overview of the features added since the last update:

These will all be covered in Dev Diaries heading up to release. For a full feature list, check out the main page.

I've put in a lot of changes and polish since the last Dev Diary went out. The most noticeable change is that weapons are now 3D. Weapon mods also change the appearance of the weapons. 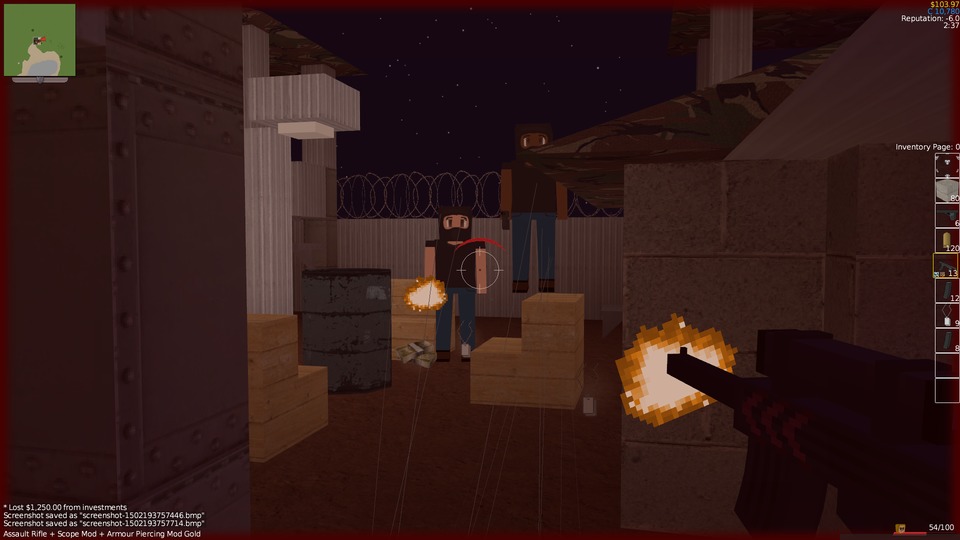 Weapon sound effects have also been remastered so that weapons sound meatier.

You can now convert custom buildings into templates - these can then be placed like normal buildings. Check out the gif below:

In shader news, the fragment shader now has a pixelising effect when up close to a texture, this is to make everything look consistent without the world descending to a pixelated mess. If you aren't a fan of pixels, not to worry! There is a setting to turn it off. 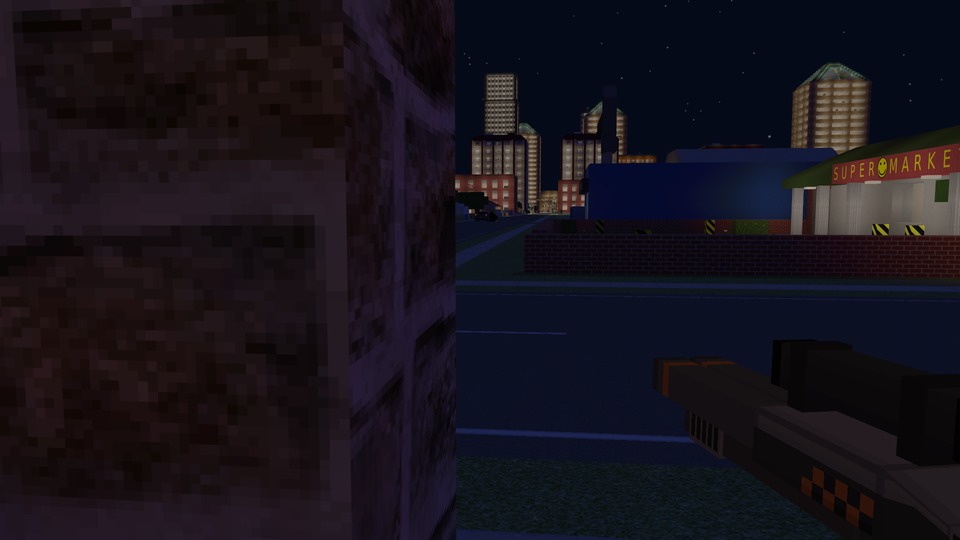 Example of the pixelising filter. This can be disabled in the settings menu 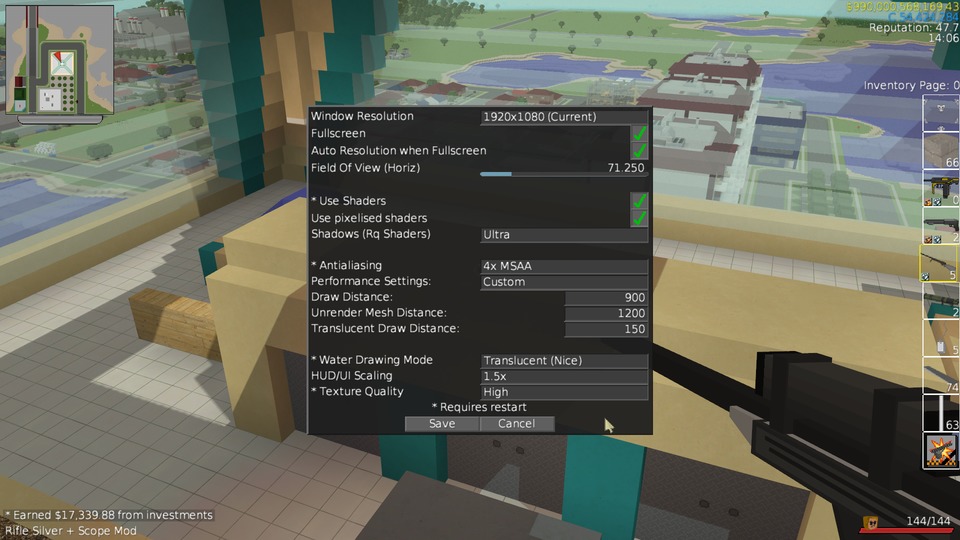 Lots of improvements, optimisations and bugfixes have gone into the networking engine. Players, vehicles and weapons are lag compensated so even on very high ping servers things feel smooth. The server retains authority over weapon usage and can be set to be authoritive over player and entity movement.

I've also written some server management stuff, such as savegame specific lua scripts, the ability to send players from server to server whilst in game (think of an in-game stargate network). I'll go into depth about this in a dev diary later

This has allowed me to set up a dedicated server for fighting. You spawn in a tiny seaside town, surrounded by city walls, with a full cache of each weapon in the game, unlimited ammo and rockets and 1 of each weapon mod. The map is reset every hour, so you can safely destroy everything without feeling guilty. 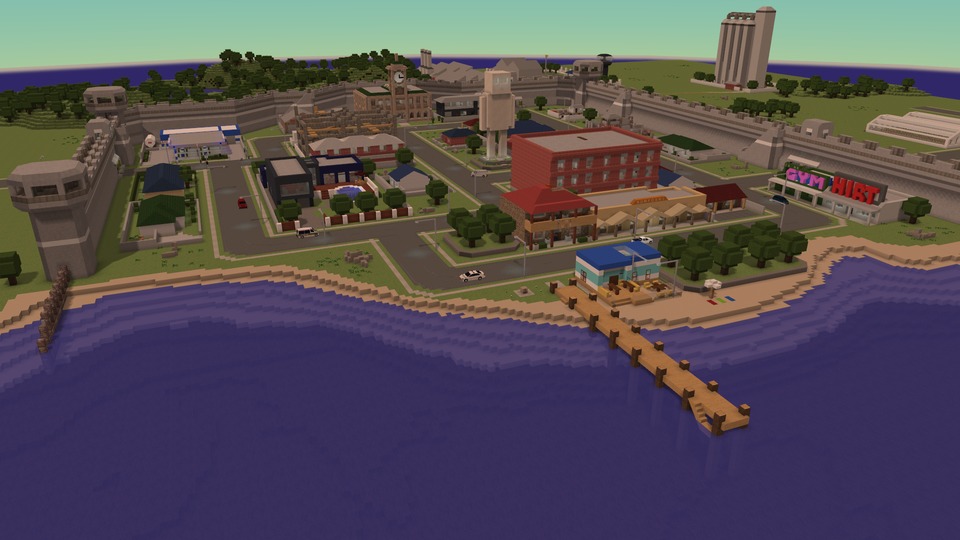 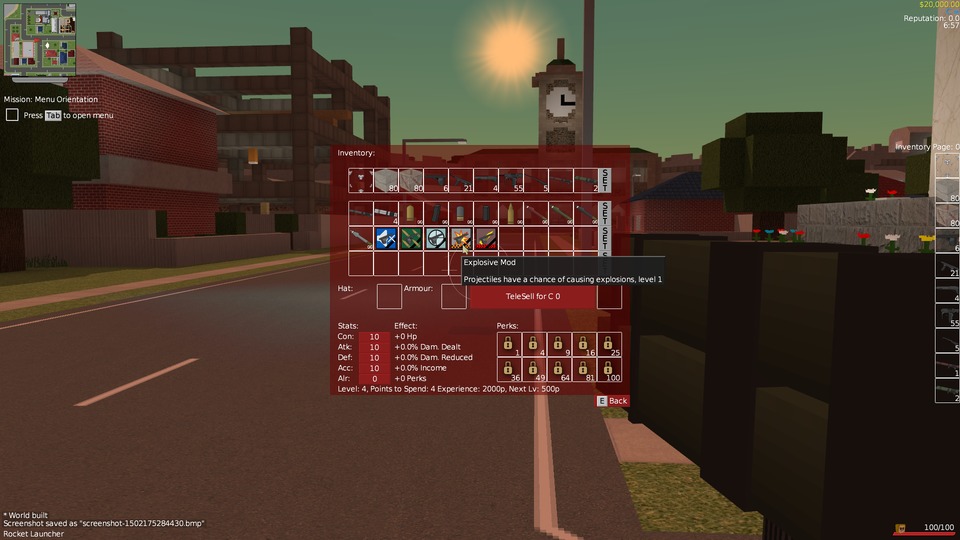 Your starting inventory. Note that you also start at level 4. More on that later...

I've also made most missions Co-Op, but thats a Dev Diary for later.

Thanks for reading! If you're interested in this, give this a Watch or consider adding Voxel Turf to your Steam wishlist in the link below:

nice - so there will be demo updated? or we get one payable on steam?

The demo has been updated on VoxelTurf.net

thanks and i tried i got error so please advise me how contact you for bug reporting?

Zip the logs directory and email it to VoxelTurf@gmail.com, and I'll get on it

Important: If you have an old version of the demo installed (such as 0.2.2 or older), install it before installing the new version (0.4.26-DEMO)! Otherwise it will create a duplicate install.