An update regarding the development of L.U.R.K. Version 1.1. L.U.R.K. has started to branch in more directions, in order to better accommodate the players of varying tastes.

L.U.R.K. team has heard your woes, bugs of various degrees are being reported as of the latest patch, and time has passed since the last 1.0552 patch. However, at this point, L.U.R.K. is stable, and therefore we've dedicated our efforts into larger, more meaningful updates, instead of frequent patches.

This allows us to allot more attention to detail regarding balance and quality issues, add more features, and fix bugs at a faster rate, rather then concern ourselves with distribution, and further confuse the end user with more installation instructions.

Bug fixes are always welcome, but it's obvious that in order to keep the attention of the end user from stagnating, it's important to keep our title fresh and up to date. However, that doesn't always mean objective improvement. There's always been a subject keen to debate, you're probably aware of them as Blowouts. Frequent Emissions from the zone that occur on an unscripted basis.

While it's debatable whether or not Blowouts should or shouldn't be used, we felt the demand was high enough from the community to accommodate such desires. However, due to an autistic level of perfectionism, we couldn't help but give blowouts our own distinctive flavor. In an iteration that we feel is representative of our project's attention to detail. A philosophy that hampers itself upon it's weakest aspects. Here's a demonstration of one of the cycling blowouts you can expect to see in L.U.R.K. 1.1:


Although that isn't the only large update you can expect from 1.1. We'll report more on it later, however you can expect to see a very large overhaul regarding The Bar's Arena Mode.

Rest assured, that your problems and requests have been heard, and we're working as hard as we can to make L.U.R.K. as crisp and clean as possible. We'll spare you the list for the time being, however we've attended to most everything, whether it be outright bugs, or simple quality concerns. When it comes to polish, we've gone the extra mile, and actually restructured the configurations for accessibility and organization. 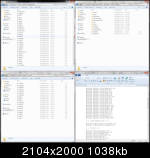 Closer then you may think. Expect to see it before this month's end, possibly sooner. Until then, we'll keep you posted.

Why not ask Wolf for a spot down in one of the basements, it's less disturbing...

I'm with Callin on this one...

I'd rather not wake up to discover that one of my kidneys has been harvested to increase Sid's profit margins :P

I'm guessing by, "removed sleeping bags by DEFAULT" he means that sleeping bags may be an optional addon. Besides, I'd rather sleep in a bed with someone to protect me whilst sleeping, than out in some grass where a bloodsucker could easily drain all the life out of me.

Excellent I can't wait :D I think LURK is going to be Oblivion Lost's biggest competition :)

You have no idea. OL is getting a reworking, so it should be interesting to see how people will compare them.

I hope you'll be able to use beds in abandoned houses and such as well... though I doubt it.

This really needs faction interaction of some kind... more than standard SoC.

Awesome news! But, I can't figure out the point of attaching ammo to your belt...Can anyone help me out here?

That indeed is strange and I didn't figure out a sense in that one. But that said if you can buy a gauss rifle at yantar but the seva suit in the safe is just a plain rookie armor ( also the science suit you get as reward in yantar is a stupid rookie armor ) then I'm not surprised at such strange things at all. Before adding new stuff they should remove these silly problems. If you can't find good armor in the wild I can understand but stripping them from rewards is plain stupid.

dragonlord, the changed armor drops are a deliberate design choice. it is intended that players will work towards purchasing better armor, rather than having some of the most important items just given to them.

What about translation to other languages?