Today we are showing renders of a couple of old friends from Forgotten Hope that we felt were of suitable quality to port across. They are of course the PTRD and PTRS.

Today we are showing renders of a couple of old friends from Forgotten Hope that we felt were of suitable quality to port across. They are of course the PTRD and PTRS. 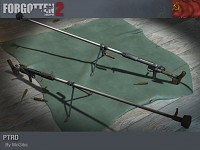 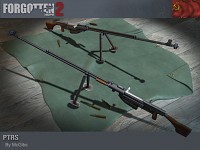 The Red Army in the 30s had made some aborted attempts at producing an anti-tank rifle, but no real progress was made before the Invasion of Poland in 1939. The Poles had in the Wz.35 a capable weapon that was used against the light German tanks to some effect. Following the fall of Poland, the Soviet Union captured a number of these rifles but did not make much use of them.

The shock of Operation Barbarossa provided the urge to restart development of an anti-tank rifle. Both Vasily Degtyaryov and Sergei Simonov provided a design that was accepted into production, with the first rifles reaching the front by the end of the year.

Degtyaryov's PTRD was the simpler of the two, and featured some elements of the Wz.35 and the Panzerbüchse 38. It was a single shot weapon, and unusually for a bolt action weapon was designed to automatically extract the spent case. The whole barrel recoiled into the stock, and the bolt was forced open by the protruding metal opposite the cheek rest. Simonov's PTRS used design elements from his SVT-38, and while longer and heavier than the PTRD, did have the advantage of a 5 shot magazine and semi-automatic action. It suffered from jams caused by fouling of the gas system and being generally more complex to manufacture, was eventually dropped in favour of the PTRD.

In action, the 14.5x114mm ammunition with the BS-41 tungsten cored bullet was capable of penetrating up to 40mm of armour at 100 metres. This was more than sufficient to deal with the Panzers of 1942, but by 1943 the level of armour protection was starting to increase. The rifles remained in use until the end of the war, seeing use against APCs and hardened firing positions. About 190,000 PTRD and 60,000 PTRS were made during the war, and ours were made for the original Forgotten Hope by McGibs, with Toddel updating them to FH2 standards.

Our winners for this week's screenshot competition is Leopardi. You can view the winning submission here.

We are still accepting entries for the week of July 13th. If you think you have the best FH2 screenshot, post them here.

I've been waiting for these to appear a long time ago and finally they're here :D They look amazing keep up the good work