We talk about listening to the players and improving the game based on feedback.

Since launching on Early Access we've heard two main complains: the kill 10 Akiri birds in 10 seconds quest is too hard, and the kill 3 turtles with 1 fireball one is frustrating. 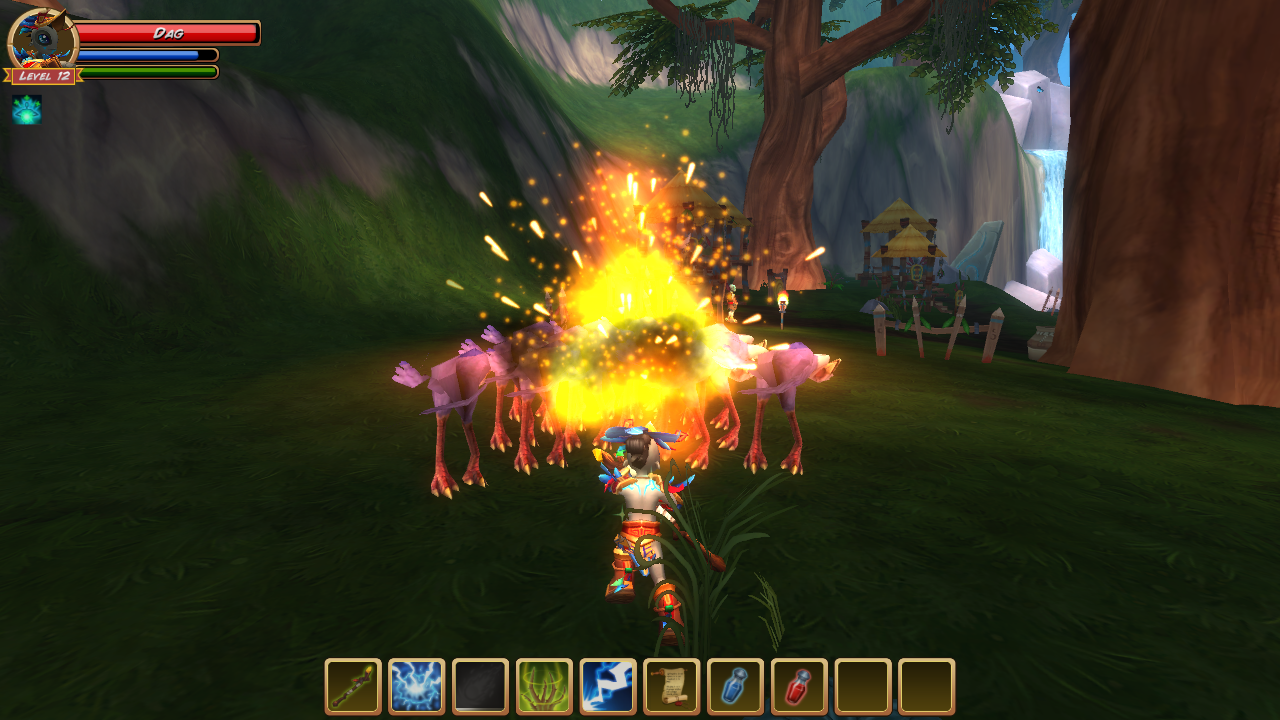 Oh no! There's a timer!
We love the first Akiri Birds quest, we think it's a good challenge and while being hard, it used to give players the tools they need to face the rest of the game. So when we were watching LetsPlay videos or streams, we'd see them dying a few times on it, but then they'd go on and kill all the skeletons at the Docks in one try.

But we also saw a lot of people experiencing that quest as a literal wall. They'd just die over and over again, getting super frustrated in the process, and sometimes simply quitting the game since they saw no way around it.

So instead of asking you to kill 10 birds in 10 seconds, now the quest only asks you to kill more than 1 bird with 1 attack. 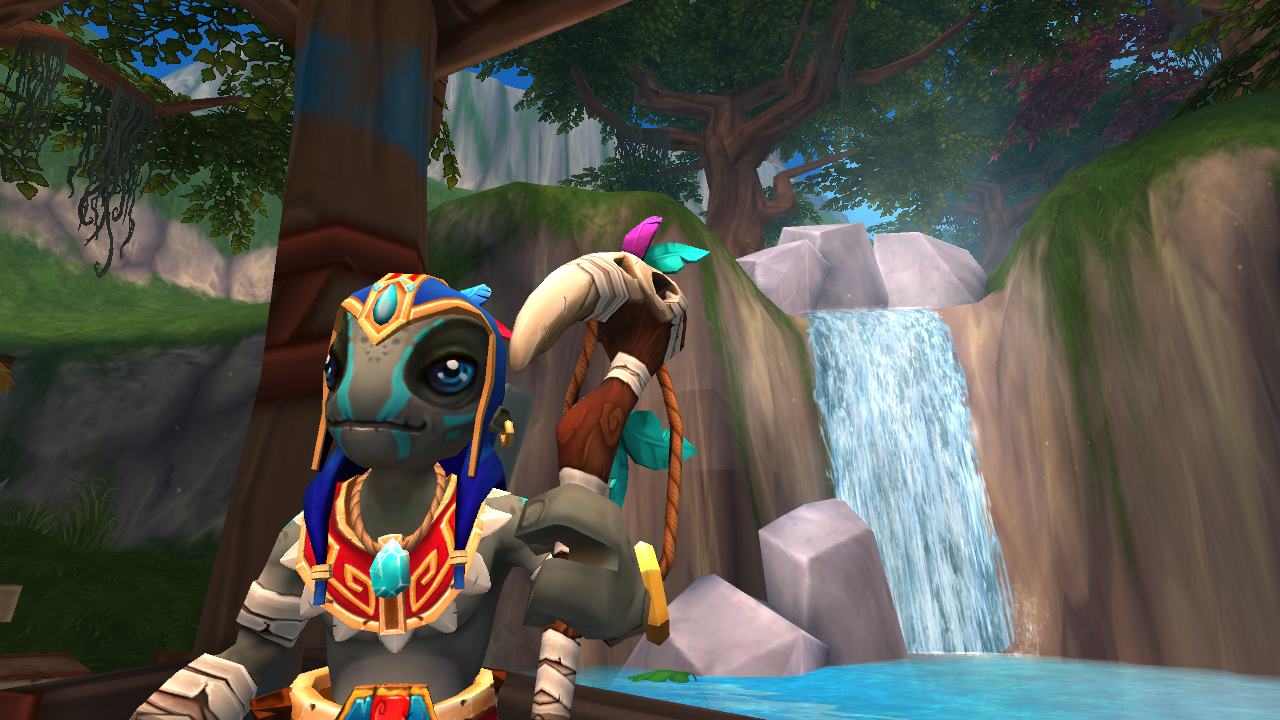 Wording is key here, since the player needs to do pretty much the same thing (get gold by killing a few birds or gathering reagents and then selling them to buy the fireball spell, learn said spell, and then roast some more birds with it).
Except that before, by giving players a timer, we were making them throw caution to the wind, and they'd go right in among all the birds, aggroing them all at the same time, but without the proper tools to win the fight.
Now without the timer we're hoping that they'll go "My staff and Ice Shard can only attack 1 bird at a time, so the only way to go is to buy the Fireball spell" instead of "I'm sure there's a way to kill 10 of these guys in 10 seconds with just the staff and Ice Shard!," which was absolutely impossible.

It's still impossible, but now we don't give the players any hope that they'll be able to do it without upgrading their gear! ; )

AND since we still love the quest, and we have a perfectly good timer programmed in, we kept it as an optional sidequest!
(Go talk to the new guy by the birds)

Kill 3 Turtles with one Fireball
When we designed this quest, the game had no critical hits, no misses or almost any kind of damage variables: a hit was a hit. So you'd be able to really measure how much health each turtle had and then finish them off at the same time with a neat Fireball.
You also had the option to pull 5 or so turtles instead of just 3 to make it even easier. 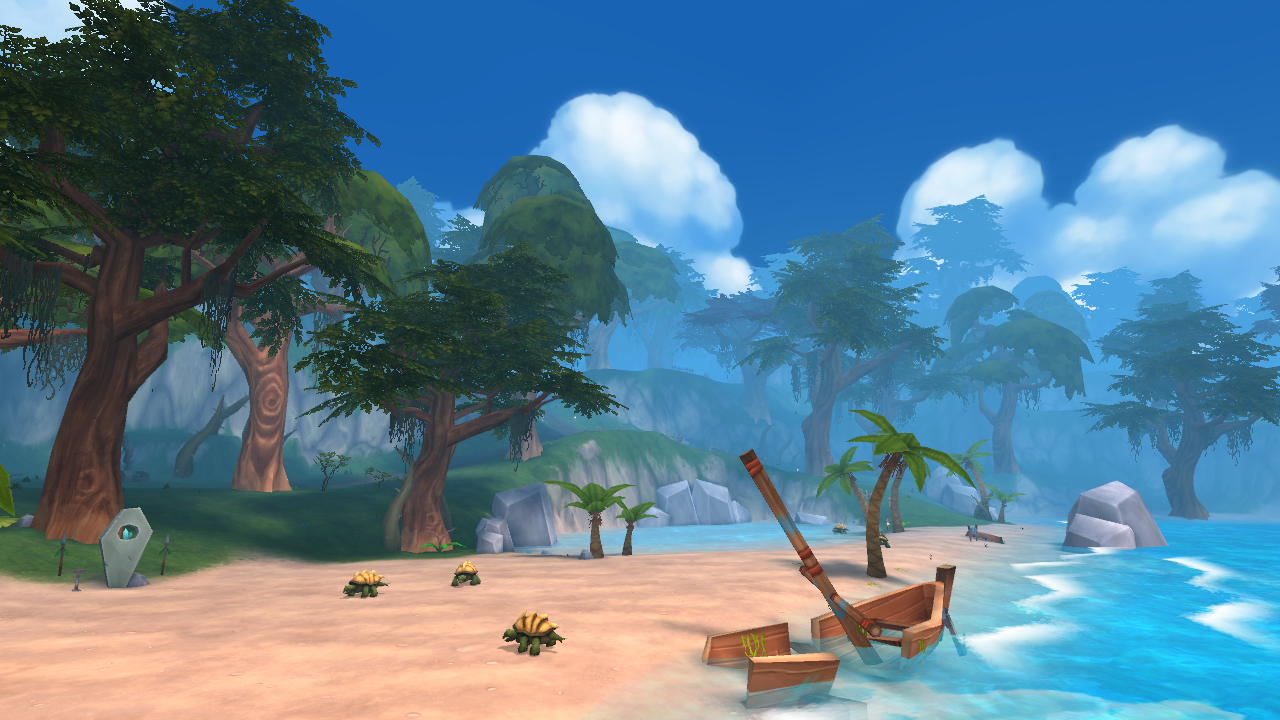 Just a nice turtle ecosystem, until you show up with your fireballs and stuff!

The game had only a very rudimentary tutorial back then, so the turtle questline was designed to introduce players to higher level fighting (it still does in a way, but now it's not as critical as it used to be).

So after the game evolved, that specific quest ended up requiring the player to pull at least 5 or 6 turtles every time, to compensate for all the damage variables (and even doing that, we saw players having to restart it a few times because the game was trolling them and 3 turtles would never die at the same time).

Also the questline later asks the player to kite all 9 turtles at the beach, so it made that quest a little redundant since some players were already pulling all 9 to finish the 3 turtle quest.

For this quest we pondered about ways to fix it, removing damage variables during it, removing the request to have them die at the same time and other things. But we decided to simply remove the sub quest itself. So now that whole questline is shorter and flows better.

So we hope this shows that we listen to you! We really do! We watch every single LetsPlay video and we try to watch all Twitch streams live (we sometimes can't because of timezone issues). We read your comments here on Steam and everything you write us on Twitter or Facebook.
This doesn't mean we'll turn Tanzia into a sidescroller shoot 'em up because some random person told us that's what they really want though! : D
It means that we appreciate your input, and we're always listening!

This new build also fixes a few bugs and other things! Read all about it on the full changelog below:

7/14/2017 P4 #3170
-adjustments to Abenaki's Challenge intro quest to make it less cryptic.
-add the original Abenaki's Challenge as an optional side quest.
-remove Kurame's 3-turtle quest. It became redundant with the addition of crits and resists and people didn't like it.
-open up Temple Ruins!
-open Sinking Island!
-open The Ancient Library!
-add an NPC who tells you where to catch the boat.
-FIX: Using Gamepad, if you select a side quest in the journal and then complete it, you can no longer select items in the journal.
-FIX: The cliffs on the sides of The Lagoon beach are bare.
-fix bug where people are jumping right off the boat dock and into the water at Bear Island.
-FIX: Can pass the collision wall by following the water line from The Docks to Turtle Beach.
-fix some Forgotten Jungle NPC chatter issues.
-lower the artifact gem prices so you can't sell 2 gems and buy a castle.
-update collision models in Emuri Village so you can't jump through the roof.
-make Emuri in Emuri Camp say things.
-make Diplomatic Immunity NPCs say meaningful things if you speak to them out of turn.
-FIX: remove the vial of water from inventory after giving it to Tika.
-FIX: don't let player walk on water in Forgotten Jungle.
-clear the Trigger flag on all water. Use layers to avoid water collision instead.
-fix Emuri guard and captain display names in Emuri Camp.