In this news piece I discuss the different graphical changes Project: Evolution has undergone.

Graphics can potentially make or break a game.They’re not everything, but they do matter. You might make a game with a fantastic concept, but if the graphics look like poo on-a-stick, then you’re essentially playing with poo on-a-stick.

Project: Evolution has gone through, thus far, three stages of graphics. The first sage was the mockup stage. In this stage I was aiming for an indie-feel to the game if you know what I’m talking about. The type of graphics you see in World of Goo and such. This wasn’t technically graphics in the game per-se, but this was what I was aiming for. The second stage we saw was the starter stage. In this stage there was only the bare minimum needed for the game. Basic graphics, lighting, etc. Then shortly thereafter I tweaked the graphics for stage three, in which we saw the addition of atmospheric effects.

Originally that was going to be it. After stage three I was going to focus entirely on getting a beta out for people to try. Problem is; I slowly began to hate that graphics. They reminded me of unpolished graphics I’ve seen in several games. Yeah, the atmospheric effect was cool, but the graphics still lacked something. Plus, to top it all of, the atmospheric effect ended up displaying so many particles at once certain times that even my nvidia 9600 couldn’t handle them. Seeing as how I want this to be a game for anyone with any system to be able to play, this needed to be fixed.

So this morning I decided to sit down and modify the shader engine. Plus I ended up changing the skybox completely. Here’s what I came up with: 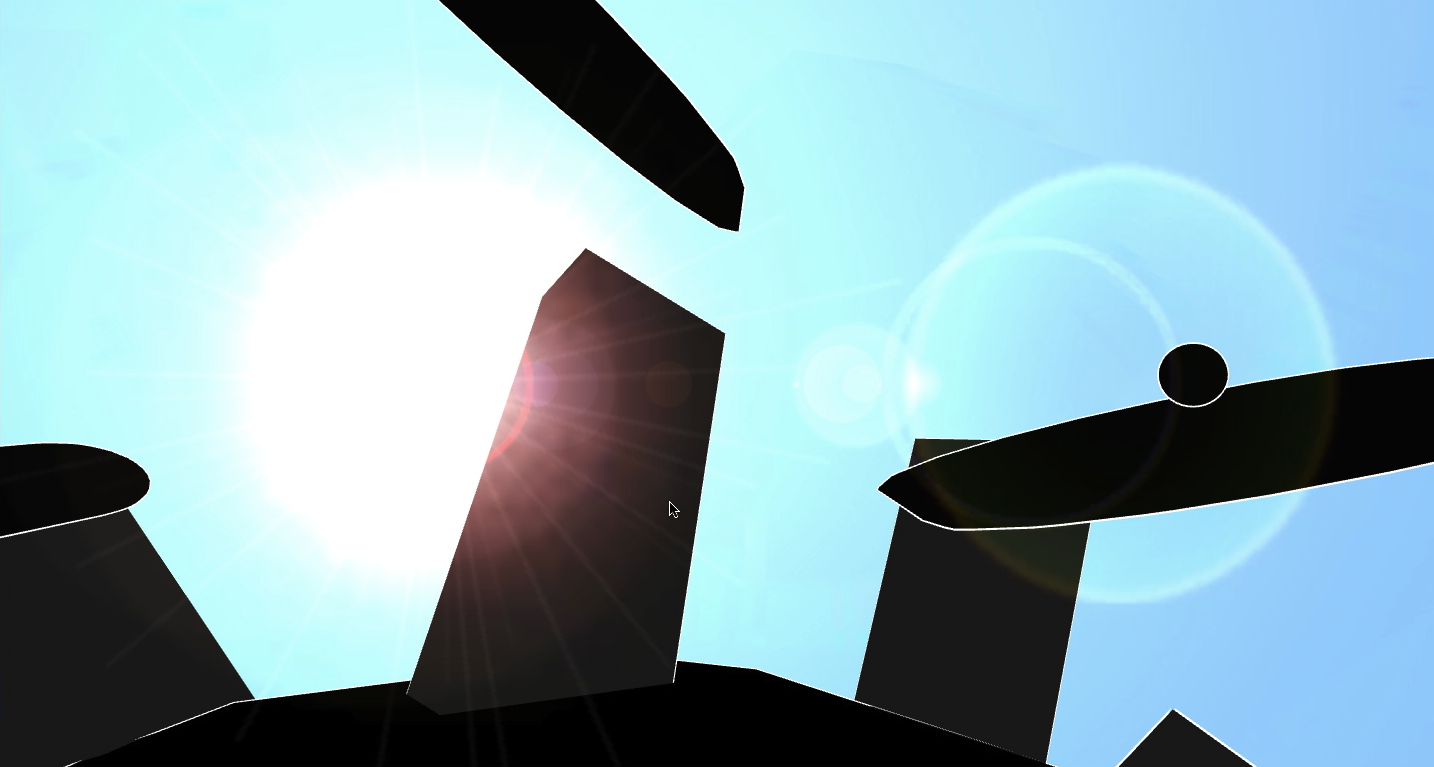 There we go. This is, originally, the type of graphics I wanted to achieve in the game. Simple colors, outlines, etc. But I was unable to achieve this at the time due to the fact that I am still learning Unity3D.

And so there you have it. This will probably be how the game looks, but with maybe a few tweaks in the future. Plus it should now run on even cards made back in 2000.

Too much lens flare!

Other than that looks nice.

I might modify the lens flare, but it really isn't too bad. Most of the time a building or the platforms are covering it.

so Unity can scale from iPhone to PC perfectly well? And match the graphics of other PC engines?

I have not yet played a Unity powered PC games. Any demos out there now?

Unity was originally just a Mac game engine. Several older cult Mac games are powered by it. Only recently has Unity made an attempt to mainstream the engine for both Windows and Mac. Hasn't had much success though. Most people are using it for iPhone, which is ideally where I'd like Project Evolution to go. I just can't afford a Unity iPhone license.

The gaming company Freeverse is the biggest user of the Unity engine on the desktop. They have the largest collection of games under the engine in their list. But they're also focussing more on iPhone nowadays.

Forgot to mention. Unity was debuted a few years before the iPhone was out. Thus why, in actuality, the iPhone games made on Unity are really just scaled down PC games converted to Objective-C for the iPhone.

How can something be cluttered and bare? That's like saying a dumpster is messy and clean. They don't go well together.

And you called yourself a NeoTokyo fan. Disgusting.

And you can't take sarcasm. Disgusting.