Did you know that in Dead in Vinland, traits will give you some advantages or penalties, depending on how you play? If you didn't, you should read this one!

Hello survivors! Soooo the development is going smoothly. We are still making some tweaks for some systems, and we have just 1 or 2 things to add… Or maybe a hundred. Anyway. Today, we’re going to talk about traits in Dead in Vinland.

In Dead in Vinland, we have several types of traits:

Before going further, let’s explain what a trait is. A trait is a characteristic that is given to each character. They will have many effects. They can for instance give a bonus of XPs, or decrease the skills of a character. 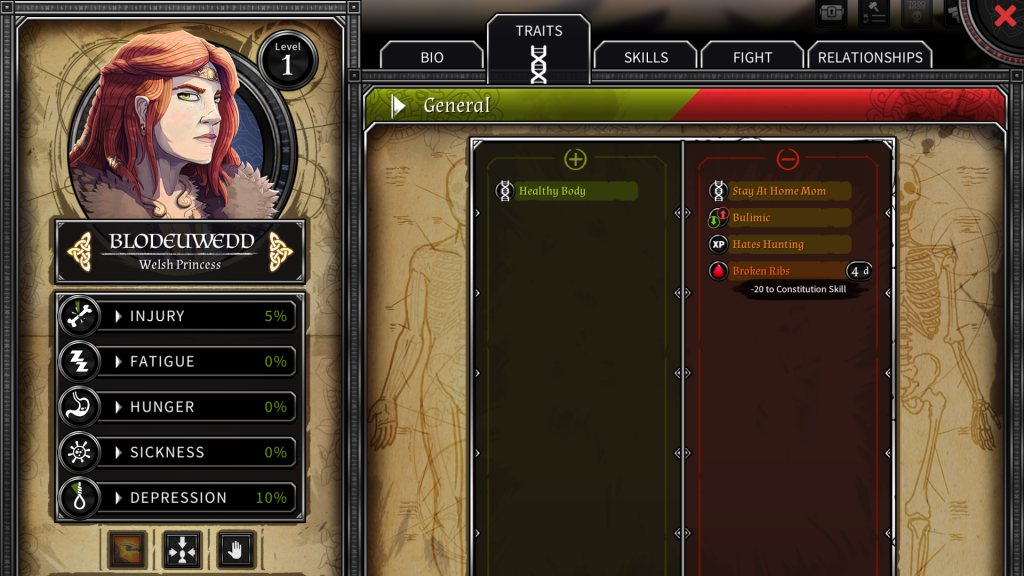 Finally, the traits can be either good or bad for the character. Hence, there are 2 columns in the traits menu: traits in the green column will give a bonus to the character, while those in the red one will give him/her a penalty.

Now, we’ll talk about the historical and random traits at the start of the game. As you know, each character has his/her own personality. For example in the game, Eirik blames himself for what happened to his family, and Kari loves adventures. Well, that has an impact in the game! Each character has one good and one bad historical trait when you start the game.

When designing the characters of the Dead In… serie, we always face 2 problems: we want replayability and random elements, but we want real, living characters, not just faces without stories. It’s kind of contradictory, because the backstory and physical characteristics of characters give you strong constraints that will stick to this character. For example, an old man couldn’t have the skills of a strong, fierce young man. Things like that. So we must deal with FIXED, logical characteristics for characters, and add a little randomness whenever it’s possible. That’s why in Dead in Vinland each character starts with a set of HISTORIC traits, that are fixed and tailored for this particular character, and a set of random, lesser characteristics drawn from a pool of traits. For now, each character starts with 1 strong positive and 1 strong negative historical Trait, and 2 random negative Traits, and each time you level up you may choose between 5 positive traits for your character. They start quite bad at everything, but they’ll soon learn to be true survivors 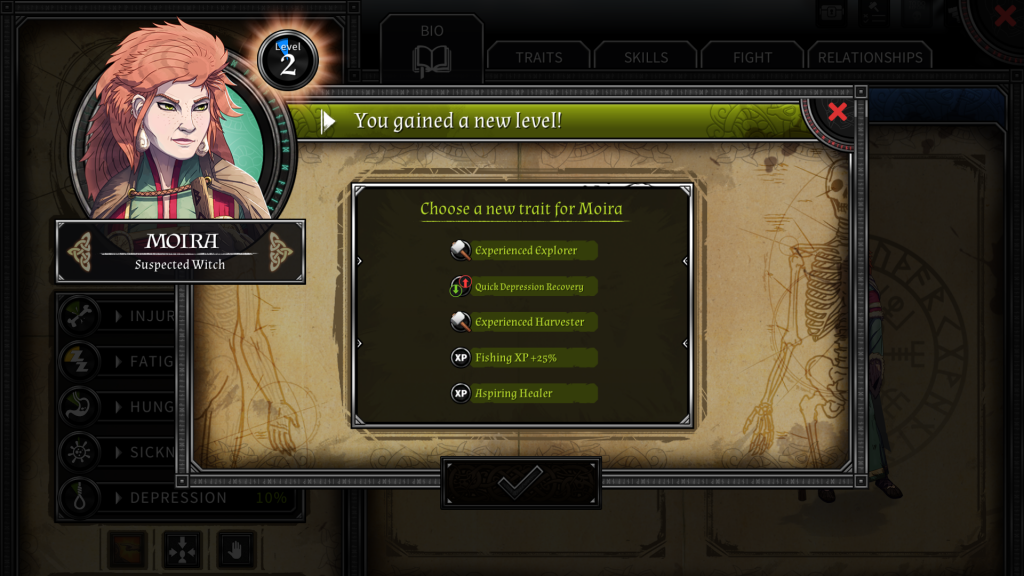 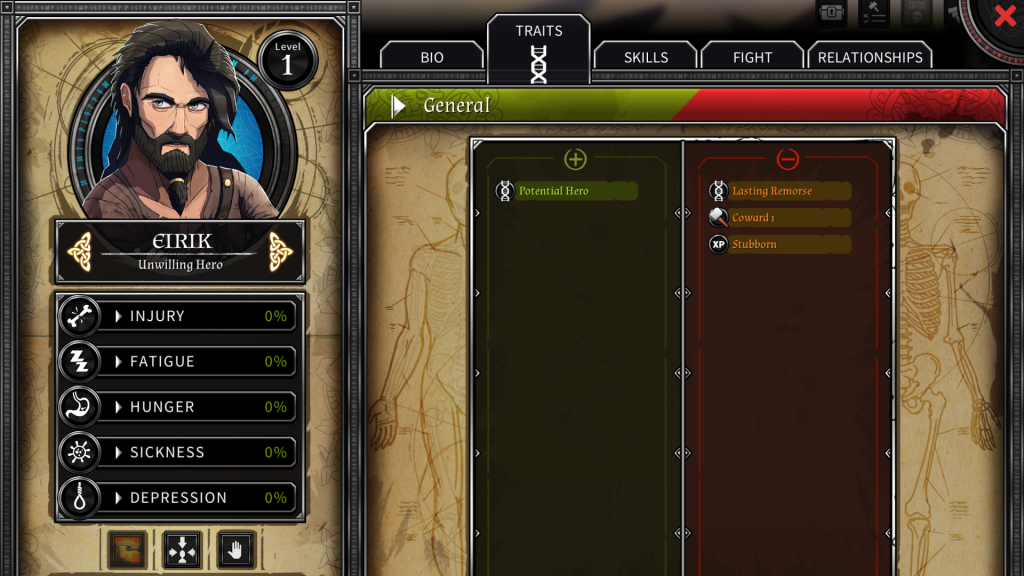 Let’s take this example. Potential Hero will increase Eirik’s Concentration and Endurance skills 50% faster. However, because of “lasting remorse”, his depression will decrease 25% slower. That’s not all! Each character will have 2 red traits that are generated randomly. On the image above, his random traits are “Coward 1” and “Stubborn”. But it’ll be different for each player!

We implemented those two systems because we wanted the characters’ personality to have a true impact of the game. Plus, this allows each player to have a different experience.

Next, we’ll talk about the traits that you gain throughout the game. When you explore the island for example, your choices may trigger some new traits. 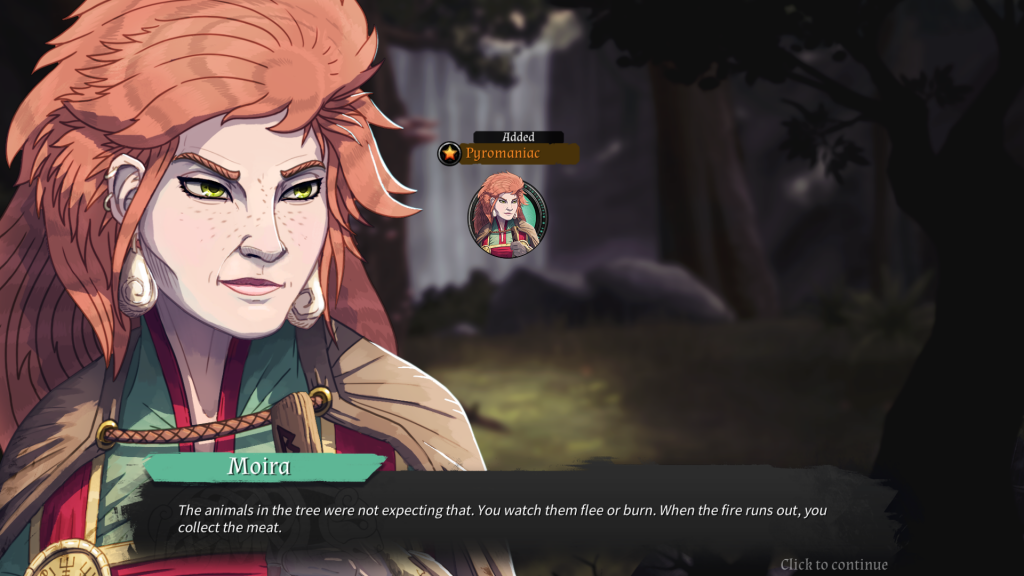 A pyromaniac Moira… What is happening to her?

Those traits won’t disappear over time. That’s why you should be very careful with your choices, as they could add some new layers of difficulty. We really want the players to feel they’re playing with deep characters that can evolve throughout the game, and the choices they make can have quite big consequences. 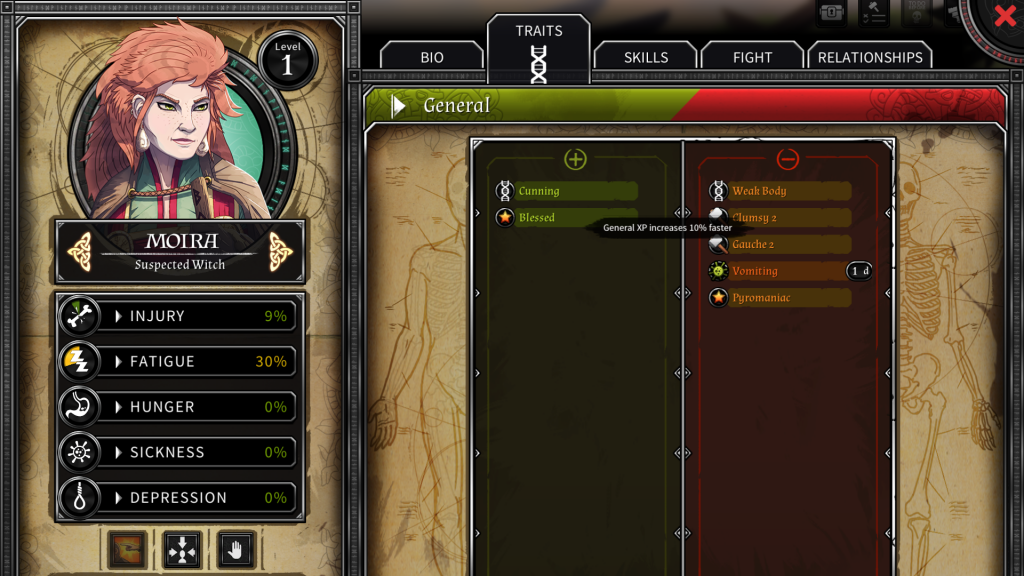 Hum, looks like Moira got a “Blessed” trait, and this one could be helpful. How did she get it though?

Then, let’s mention the temporary traits. They can also be gained in the game, but the difference with the previous ones is that they disappear over time. You’ll also gain them in the game because of your choices (dialogue choices for example).

Kari didn’t want to upset her dad, and now she’ll be depressed for 3 days

Those traits won’t be as impactful, but you should still be wary of them, as depression is one way to die in Dead in Vinland for example.

Finally, in Dead in Vinland, you can get diseases or wounds. Those also count as traits. There are 2 ways to get those. During exploration, when you miss a skillcheck for example. 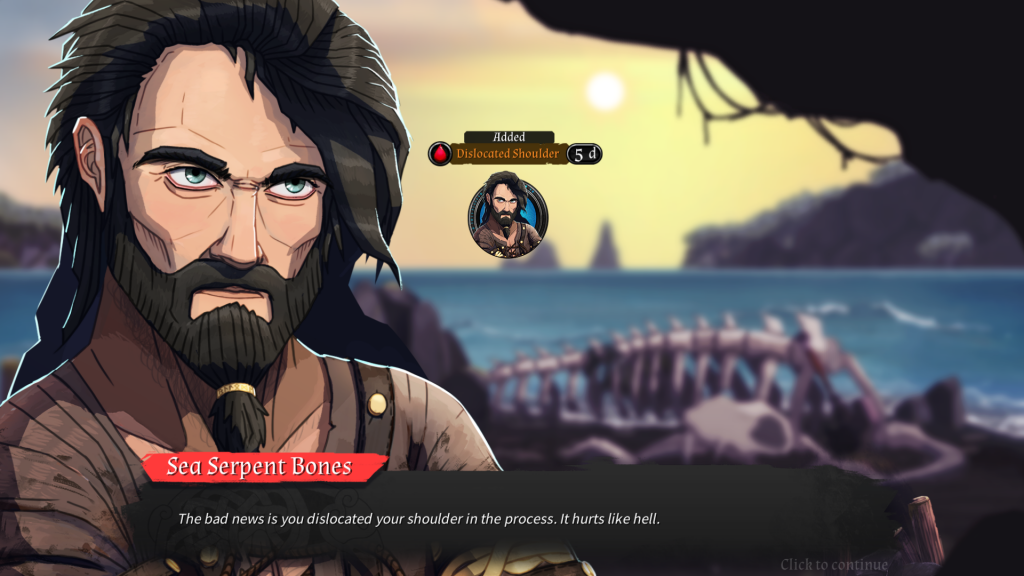 Eirik shouldn’t have pushed himself so far

And finally, as we’ve said in the post about combat, if you lose too much HP in battle, you can get some injuries. Those will count as traits. 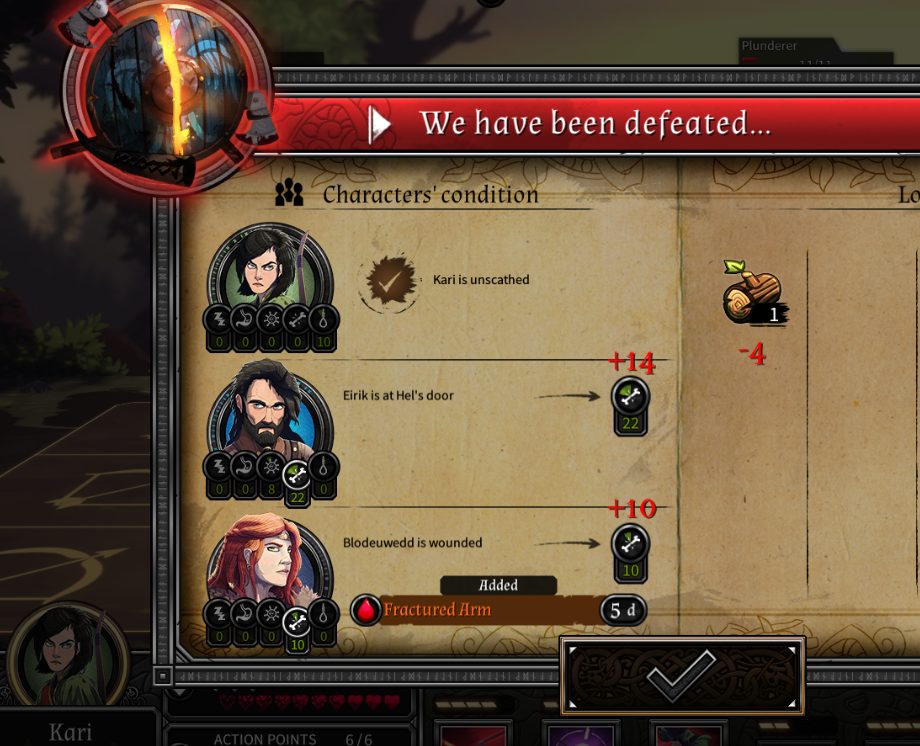 And that’s a wrap about traits! As you saw, there will be many traits in Dead in Vinland, and some will be quite beneficial (the green column), others will add penalties to the characters, and the player will have a harder time to survive. But it will be fun. We promise. Happy surviving!