Valve sets up to release the DLC for PC and 360 versions of Left 4 Dead. Which will include the long awaited SDK.

With the release of the Survival Pack DLC for the Xbox 360 the tease and the countdown for the release of the PC version has begun as the release is planned to happen later on today. The DLC will include access to the other two maps in 'verses' mode as well as the highly anticipated Survival mode which has a team of four see how long they can last against the hordes of AI controlled zombies. The DLC was originally supposed to be released around December 2008, but Valve being Valve have waited until the update is perfect. Who wants a broken update anyway?

L4D_411 wrote: In addition, for PC gamers and aspiring developers, the first Left 4 Dead release for the Source Software Development Kit (Source SDK) will allow the creation of custom Left 4 Dead campaigns that will be discoverable via L4D's matchmaking system. The SDK update is also due for release this spring, and is free of charge to all owners of L4D on the PC.


With the update the best feature by far is the ability to access the long awaited SDK. So mods like Dead Before Dawn and I Hate Mountains will finally be able to change more then just levels with a "it will have to do" SDK. As to what the SDK will allow people to do, only time will tell us that. The ability to access the Director, lighting features and the ability to finally be able to make mods separate of the game itself is some of the features I'm hoping will be accessible.

Gabe_Newell wrote: Since Half-Life launched in 1998, Valve has made continuous efforts to expand the offering of its products beyond what's included on the day of launch. With Half-Life and Counter-Strike, and more recently Team Fortress 2, we've learned that we're no longer making stand-alone games but creating entertainment services. With Left 4 Dead we're extending that tradition by creating additional gameplay and releasing our internal tools to aspiring developers so they may also create and distribute new Left 4 Dead experiences.


So with the release of the SDK what types of mods is everyone hanging out for? Let's hope we will see some creative uses of a well working AI system for online games.

*** UPDATE *** After the release of the DLC for the PC the update for the SDK was not released with the update. Lets hope we will see it soon. 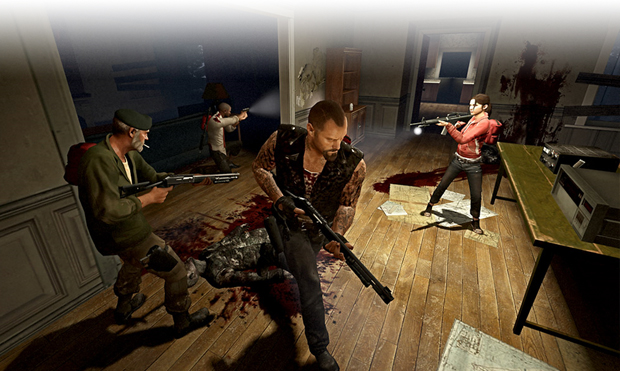 Finaly :) have been waiting for ever

I just had a quick go on survival mode on the 360....It's tough haha!
I can't wait till I can play it on the PC version later today. YAY.

What's this something which valve hasn't delayed yet? Perposterous!

Im pretty sure they said the SDK wouldnt be released with the DLC.

Where abouts did you read this?

Finally, i hope they wont limit the SDK like they did with TF2. Beacuse there are some really intresting total conversion mods that would work really good with the coop and Zombie spawn system this game has.

edit: i just read the text xD thank god they are allowing it!

There's no way Valve will release the source code, so you can quit dreaming about total conversions.

You don't need source code for a total conversion. All you need is a fully-featured SDK that lets you do everything you could want with the engine. Remember Counter-Strike? That was a total conversion, and the HL source has never been released.

You need to understand the concept of what mods are then. There's only so much you can do with a mod without code. Perfect example is Portal Prelude, that's a mod without code modifying. Now that's what it's gunna be like with L4D. The most you'll get is server plugins, but nothing huge to allow for real total conversion mods. If you knew Source modding, (or anyone else) then you'd understand what I'm saying.

I'll talk no more. Just wait 'n see when it releases, then remember me and smile vaguely.

Actually, that's completely wrong. Sorry, but the reason half life and half life 2 can be modded so easily is because we have access to the source code. Hence the name of the enginge: SOURCE. Left 4 dead, however, is all hard-coded, which means that modding it to any real extent is impossible. We can make custom maps with the sdk, and that's all.

So I don't need to bury my hopes of seeing WH40k TC on L4D yet, that's some good news.

Same mod i was thinking about ;)

Good news, I have xbox 360 version But i have been forgetting to play it :/ ima check it out soon

"With the update the best feature by far is the ability to access the long awaited SDK."
Wrong.
SDK is NOT included in update.
It will be aviable "shortly after".
Fix it.

remeber to factor in Valve time there.

Technically wouldn't this be a new time definition? Turtle Rock... or even Valve South Time?

Turtle Rock Time: Say your going to release two things at once, delay them both then only release one.

SDK should be really great for developers.

"This is part of the L4D SDK rollout, which is currently in a closed beta and will be released shortly after the launch of the L4D Survival Pack."

It'sin the official L4D blog, in the post titled "A Match Made In Zombie Heaven." So we will not be getting the SDK now sadly.

"This is part of the L4D SDK rollout, which is currently in a closed beta and will be released shortly after the launch of the L4D Survival Pack."

SDK isn't comming out today, you are all misinformed

Since when xbox is more important than a PC?
omg stupid xbox

man, survival mode sound awsome and i cant wait to play dead air in versus :D

People aren't realizing how AI this complex and mechanics this strict are not gonna allow valve to release much more then SDK to map, skin, sound, and possibly if your lucky, replace a few models. Remember this is VALVE we are talking about. They will NOT release everything unless they have complete control over the content that comes from it with a set of "anti stupid" restrictions not allowing you to break their engine.

They haven't released a half decent set of SDK since HL2 with addons for each episode.

And YET people are making great mods like Zeno Clash, PVK or Fistfull Of Frags(with full bot support).

Doubt that they give FULL L4D source. Same for CSS and TF2.
This will only give CHEATERS more opportinuties than to actual MODDERS.

Base HL2 source code is more than enough to make great distinct and unique mod or even a standalone game.

Yeah... Shows what you know.. Zeno Clash was created on the fully paid official source engine, the one that costs a bomb and has NO restrictions, and is probably more up to date than left 4 dead.

As for them mods, nothing fantastic has been done with the code, and bots are already in the half life 2 deathmatch source code, they just need fixing.

Can't wait for the official mod support and SDK.
Thank you Valve, I can't express enough appreciation to you guys and gals :)

One of the few developers left who understand gamers and actually tries to provide them quality and innovative updates for their game for FREE. It seems all to common now to see developers strip features out of a game only to sell them back to the gamer as paid DLC updates. Thank you Valve for showing everyone how to create value in a game and make it worth buying instead of cramming DRM into it.

Lightspire just may be put on hold for this game update..

HAHA Fail, you actually think that Valve is releasing the source code...

(He told me this on my profile then tried to laugh at me when they released this SDK, even though i said they are releasing the SDK with mapping ability only, but NO source code.)

So yeah, anyone want to agree with me or laugh at this guy, then in doing so will be funny.

And it's so true. People can say what they want, but when the (mapping) SDK comes out and they see it's got no source code they can think back with their little minds and see who they were wrong.

OkeiDo, you of all people should've figured this. Although I see you on your ZPS profile thinking you're going to be able to port ZPS to L4D. Good luck with that. Time will tell.

Well you put it better than i did!

Thanks, and also look around at the large number of mods waiting to be ported, ive tried telling the developers but they are all narrow minded and stubborn and refuse to accept that the Sorce Code is not being released. Omnibus or something is one, and there is another but i forgot the name, it is about rambo and people on that mods moddb actually are discussing giving the zombies guns and stuff in the source code to make a mod.

Anyways i have my proof to show these people and hopefully save them time, and others too.

My L4D is updating right now on steam, but no SDK guys...

L4D update i found was around 5:40PM EST but I opened steam 10 minutes after, so I think it was 5:30PM EST when they placed it.

By shortly after Survival Pack, I think its a week or two after survival pack is released (At least/most).

I just downloaded it, but source sdk isn't updating or anything... still no sdk :(