The more I get done on v2.28 the more I realise that it'll be a really large update, and more things that require my attention keep poping up! The development of v2.28 has now entered it's third month and since a few weeks've passed since my last update on the progress, I'll try to fill you in!

A new skill has been introduced to all AI character's called "Pain Threshold", the pain threshold is sort of their physical damage resistance, also greater pain threshold will make monsters less likely to enter "execution"-mode, this has now enabled me to manage which monsters that should be easier to execute and which ones that are supposed to be more toughened as the "Execute"-mode implementation in v2.27 and earlier was set up sort of like "if the monster's health is less than 25%, chance of execution = x%". Needless to say it was kind of random. 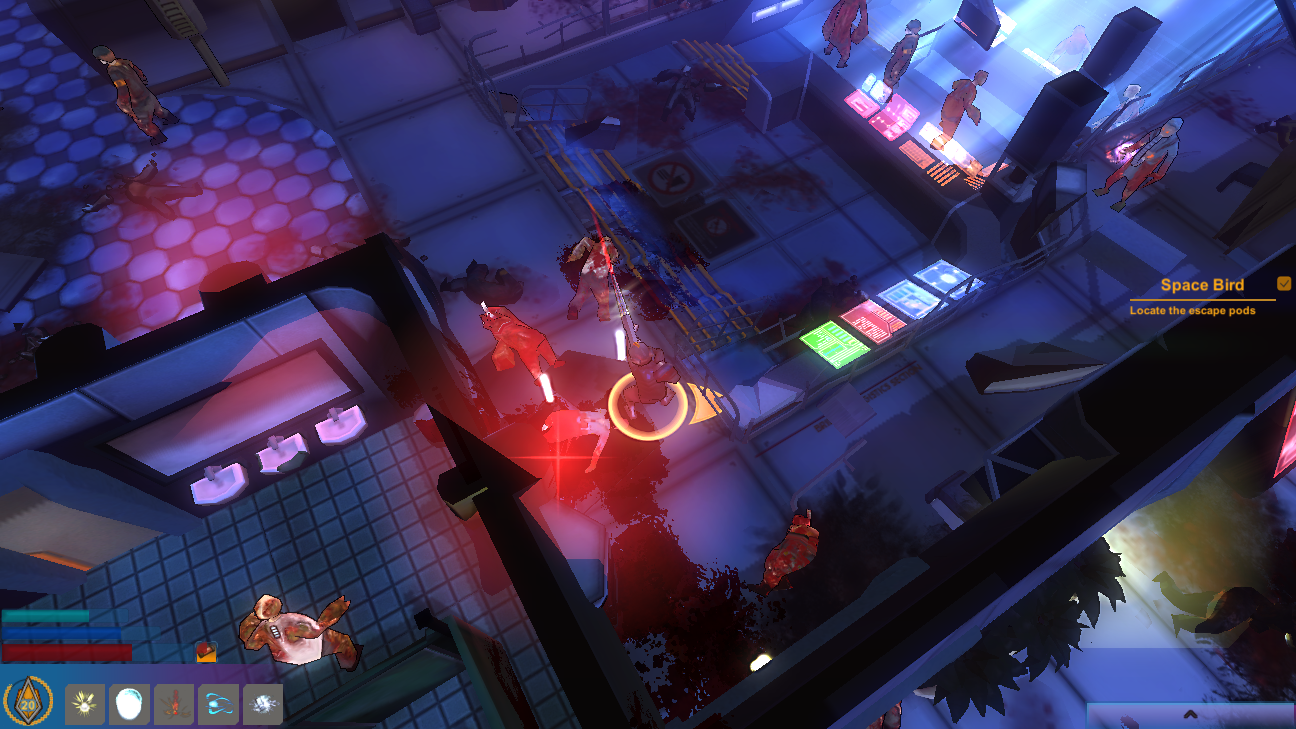 Before v2.28 is released I'll have implemented a new item stats aswell called "Impact", that will help the player to bypass the monsters pain threshold.

I'm also done replacing the old 'Forsaken'-monster models with new ones, seen in the attached pictures are the new Conjurer and Guardian models. There's also a new unique monster that will be possible to encounter in chapter 5 (The Bridge), he seem to be stuck in some weird space-roots at this time though.
I'm also introducing AI weak-spots. I added some weak points for the final boss, primarily as an experiment, and I felt that it turned out quite good- so I've already gone ahead and added weak points for a few common monsters aswell. 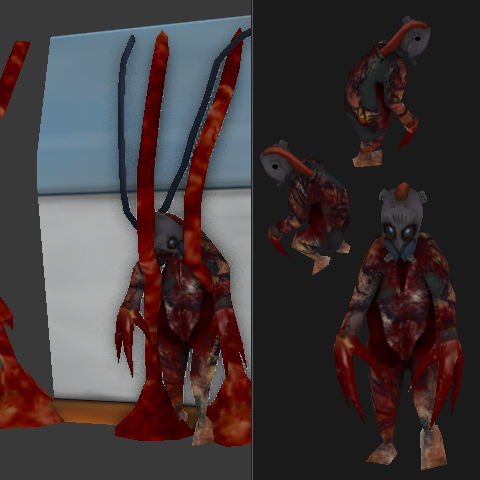 To dig deeper on the subject of weak-spots in LBKR: monsters that have weak spots will from time to time reveal them for various reasons, and attacking them with a weapon that the monster have poor resistance to will result in massive damage bonuses when the weak-spot is destroyed. So to give an example lets take the 'Hypoxia' monster, they've received a pair of cannisters that are attached to their backs and are filled with plasma. The cannisters will start venting if they get too hot, which can be identified by the cannister's shell slightly opening and letting out blue steam. 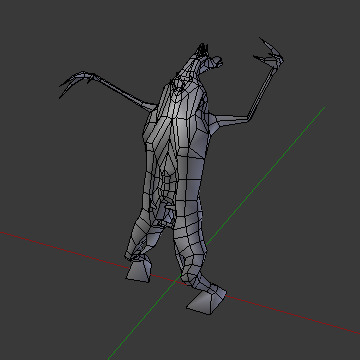 If the player destroy the cannister with plasma-projectiles it will explode and not only inflict bonus damage on the carrier of the cannister, but to any unlucky monsters that are nearby aswell.

The panel that display current buff/debuff-effects have been improved with a new style/layout in order to give the player a better overview of any relevant stuff, and also the inventory has been updated again, while the layout remains pretty much the same as introduced in v2.27, the left-most scroll-window has been sorted into a more grid-like layout, as I found it irritating to have to scroll up and down all the time to find items while testing some new features in the game. 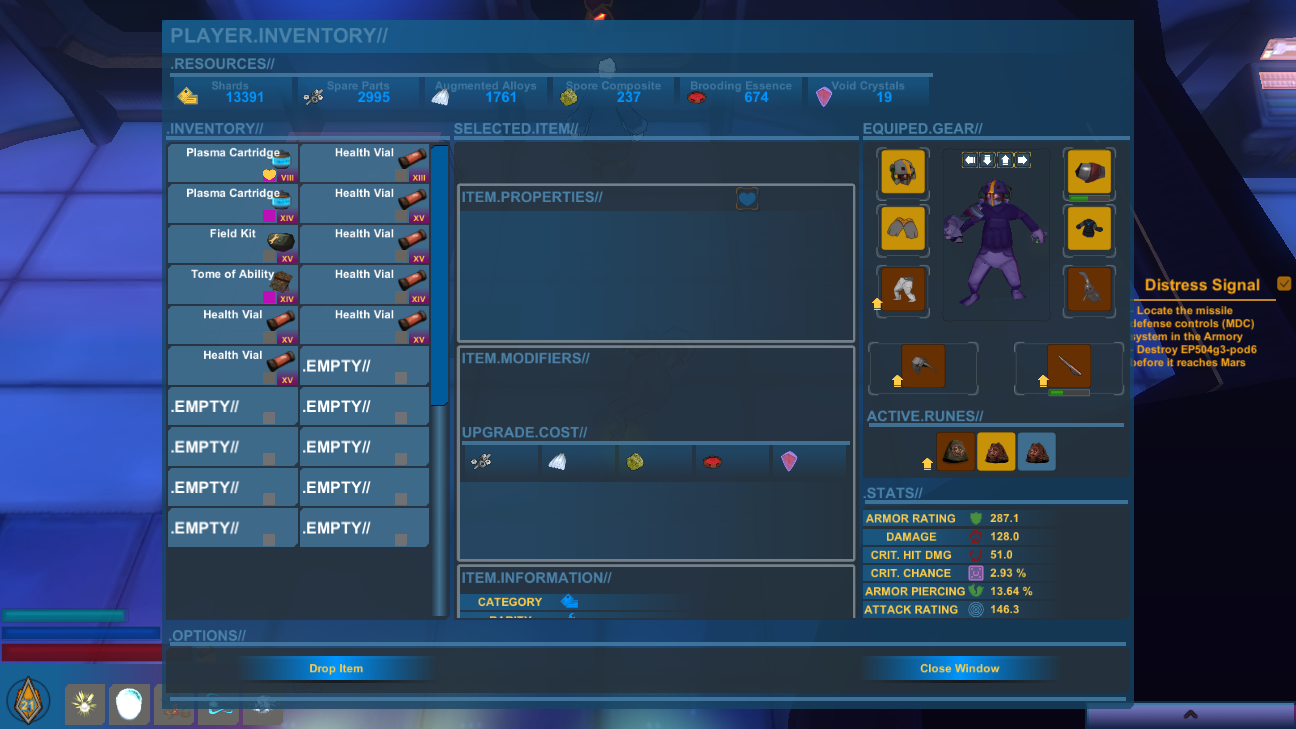 There are currently 41 new world chunks waiting to be explored as soon as v2.28 is released (and with that there's now a total of 571 unique world chunks.), most of them belonging to the new and final chapter of the game- and all story-missions have been created aswell, although not yet game-tested so we'll have to wait a while and see if they work as they're supposed to... it's not too uncommon that these things need some fine adjustments, or so I've come to notice. 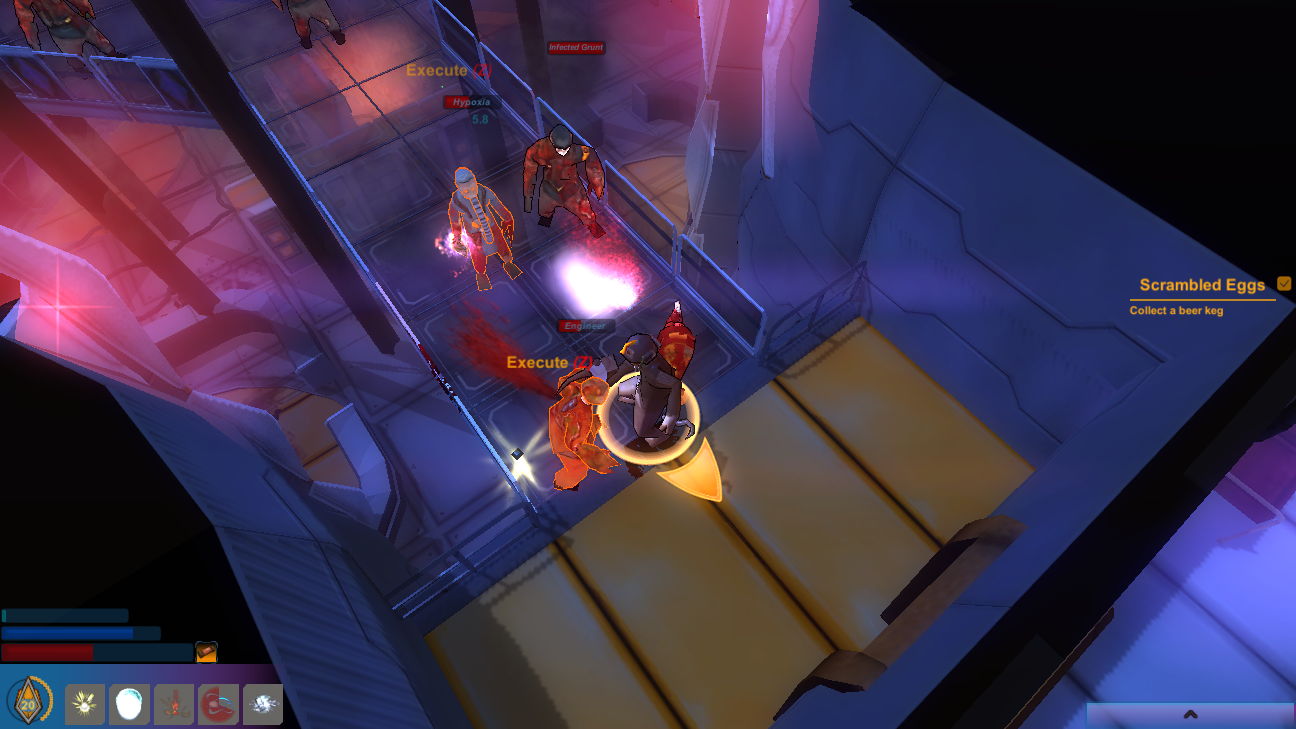 Just last week I began updating the introduction-map aswell, it'll get a major face-lifting procedure and will offer much more inviting gameplay than the current intro-map that pretty much just have you move from point A to point B (and sometimes don't spawn any items for you to equip your character with... which makes your character quite useless as you enter the first chapter of the game...)

As I mentioned earlier, weapons will now have different Impact-ratings that affect how well your attack may stagger an enemy and make it possible to quickly execute it, to add to this there will also be some changes on how plasma fuel is managed for ranged weapons. Currently the plasma fuel required to fire any ranged weapon is predetermined and depends on which (ranged)weapon type the item is ranked as. (Eg. Shotgun, Assault Rifle, Handgun. etc.)

I'll have the plasma fuel implemented in the procedural item generation now though, while the base stats are still determined by weapon type the plasma fuel requirement will now atleast vary between each weapon that is dropped even if they are of the same type. And I'll make sure to add the plasma fuel-useage to the item tooltip so you can see at once how much plasma is required per shot fired!

I've also spent some time setting up a visual studio project page to help maintain bug issues, tasks I need to do and a wiki of the game in it's whole, so I've obviously wasted some valuable development time but it was starting to become quite necessary as I had a hard time keeping up with all papers I had scribbled things on and to-do-lists scattered everywhere.

Just out of curiosity I had a quick look at the file count in my project directories, so to share some information of completely no use whatsoever- the project now consist of:
-1437 textures/2D art files
-387 3d models
-1392 code files
-2859 audio files (Although, rough estimate of mine is that atleast 800 of those files will be removed within soon, alot of sfx has lingered since very early versions of the game and are no longer used in-game).
- 198 misc. files (Related to the game, but used to manage things outside the game engine, eg. the LBKR website, build releases, documentation, the LBKR in-game news feed etc.)

Anyways, until next time! Thanks alot for reading and in case you find LBKR interesting, don't forget to follow me on Twitter for more updates!

Wow, well done!
I never would have realized how much thought, planning and work you have done on the A.I. alone. Great job detailing how much work you do to make each fight as dynamic as possible.

I noticed as I play that sometimes it appears that I am not hitting the minions at all. I realized that this is the dice-rolling effect you implemented where I can hit, miss, or do different amounts of damage. Very cool!

I'm also glad to see that my saved character can load into the new releases.

Thanks and yes, since one of the core game elements of LBKR is combat I've tried to make fights more and more dynamic and interesting in various ways. It seem to be a never-ending piece of work to do. ;)

:) I've put alot of effort in designing the save/load/user data and associated files just for that purpose, I know myself how annoying it is to play a game and make some progress just to find out that in the next game update the save-files are lost.
I hope that I'm able to maintain this for all upcoming releases aswell.

You are doing a great job!

Do you think there is a chance to have some enemies recoil after being hit?

I've been playing Dead Island and one of the advantages I LOVE is that I can kick the zombie and buy some time as they recoil. Or hit them once to open up time for more hits.

That's an interesting idea, I've put it in my projects task/to-do list. :) Thanks for the feedback, I'll put some time into planning how it should work as soon as possible.

Awesome! I've never heard any developers so open to suggestions. You rock!