The Wishgranter has been Greenlit on Steam! Here are some stuff that has been implement since including a new DodgeRoll feature, Dungeon Generation Improvements and Improvement to combat systems.

Posted by RunWTheWolves on Jul 4th, 2017

Since The Wishgranter was Greenlit on Steam like a bit over a month ago, I have been hard at work on adding stuff to the game, fixing bugs and polishing existing content. Here's an update highlighting some of the stuff implemented and some things that are coming for the project.

Done a bit of work on dungeon generation for when it comes to floors and navigating them. Once you go down a level you can always climb back up. I don't want the Dungeons in the Wishgranter to be something you rush through but rather I want to capture the feel of exploring dungeons in Legend of Zelda. If you find a locked door in the first floor but don't have a key, you can always come back up from lower floors if you find one. I need to find a good balance between allowing quick dungeon runs and having interesting exploration for those players who seek it.

While working on it I also improved the map to allow cycling through the floors that have already been visited and also show up & down arrows to indicate where floors link to each other.

I've been wanting to put a dodge kind of thing into the game to make player movement a bit deeper and allow dodging enemy attacks, projectiles, traps, etc, so today I did just that. The player can now dodge roll out of harm's way! I'm still tweaking this to make sure it feels right but it already makes the combat much more exciting and makes moving around less monotonous.

Some aspects of the particle system were causing a big hit on performance and when there was a lot of stuff generating particles on screen, the fps was dropping significantly, sometimes even down to like 10 fps! That is of course unacceptable so I did some changes and now everything is better looking and better performing all around.

While playing around with the new particles I also re-visited souls and made their particles look a bit more like a fire. Very happy with how they turned out! I also added a nice little effect to make the player character flash when absorbing a soul.

I Started tweaking combat and enemy attacks to make it all feel better. It's going to be a very long process but if the combat doesn't feel just right then the entire game wouldn't be fun. As a first step I added a white flash on enemies when their hit to help with hit detection. This already adds a lot more impact to attacks and also makes it easier to understand what's happening.

Another thing is that I added a windup stage and a recovery stage to the enemies attacks as well as make them move slightly in the direction of the attack when swinging. This makes it easier to tell when an enemy is going to attack, giving you time to dodge or attack to stagger.

I have also been giving some specific behavior to enemies like for example the Archer can now jump away if the player gets too close. This makes combat much more interesting and challenging as well as making each enemy feel a bit more unique. Also added a cool new spawn animation for the Archer guy.

I have been thinking about and drawing up a lot new content for the project. Especially enemies and how to make each one specific. An enemy that I definitely want to add in is a tough, big guy that is slow but cannot be staggered and does a lot of damage. Big skeleton guy pictured above will be that enemy so expect some animations and gameplay for that guy soon. 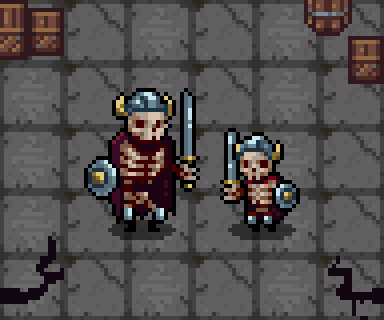 6: Octopus Boss Guy is still on the way!

Still slowly working on animating this guy between the one thing and another. Takes a lot of time to animate but coming along nicely!

That is all for this month!
Stay tuned on the project's tumblr devlog and my twitter for the latest updates. I hope you like the project so far and thanks for reading!