Haven't written for months now about Operation KREEP. It is time to revisit this old buddy bud bud of mine! Yes, as the title suggest, it is cross-platform time ;) ...

Haven't written for months now about Operation KREEP. It is time to revisit this old buddy bud bud of mine!
Yes, as the title suggest, it is cross-platform time ;) ... 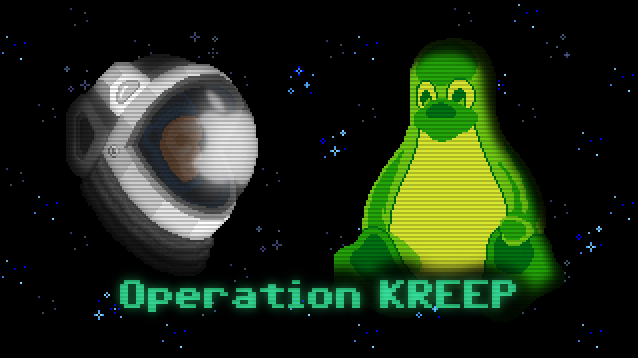 Not official, but soon...

I have two PCs, so I tested the Linux version of the game on two Ubuntu versions, but more would be nice (zillion distros :( ) + I HAVE NO MAC MACHINE :( ...
This means, that the MAC build essentially never ever been started! I would really love to release the cross-platform builds, players already asked for them, but without sufficient testing it is not going to happen. Buying a MAC would be a somewhat logical investment at this point, but Operation KREEP (and my whole game development venture for that matter) is on an extremely tight budget as it is not profitable so far, so I will try to postpone that a little.

Based on the differences between the builds (almost 0 code change, only packaging varies), I think a few simple checks would suffice. Whether installation works (files copied, icons set etc...), whether the game starts and basic configuration settings checks (settings work and are saved to correct application data folders) + a short test play round just for fun ;) .

I know it is shady to ask for free QA for a product, but this is the reality of the situation I'm in :| . If you would like to help out I thought about sharing a limited amount of Steam/itch.io/IndieGameStand keys for the full game as a "payment".

I put together a short form to ease reporting results: KREEP, apples and penguins
If you dislike sharing any personal information, but still would like to help out, please simply post results as comments here or contact me by e-mail: spidi@magicitemtech.com

I guess contact info of a cheap&used MAC reseller in Hungary could help too if you know any :) .

Just a little tech talk as closing words. The windows version of the game was made in C# using XNA. Two really cool projects were born to both preserve and enhance XNA in the last few years. MonoGame and FNA. Both are great and well established/tested at this point, but I choose FNA for porting Operation KREEP to Linux and MAC. My reasoning was the following:

All in all I suspect both libraries could work perfectly for publishing your games to the three major desktop platforms, but I wanted to give FNA a try too. I was pleasantly surprised, most things worked like a snap without much fiddling.

That is it for today, in a few days I'll post a new video & blog entry for I am overburdened. If you decide to help MUCH LOVE, SUCH WOW :) and thanks awfully!