The Kongo Civilization: unveil the secrets of an African Kingdom that existed in west central Africa. The Kongo Civilization has a loads of new systems, units and techs that you have never seen before. You can also find the article and extra information about the Kongo on Kongo Kingdom.

Historical Background: A powerful African Kingdom that existed in the west central Africa. In the 15th century, the King of Kongo at that time converted to Christianity at the hands of the Portuguese explorer Diogo Cão, and ultimately, the king converted the whole kingdom into the new religion. One of the most characteristic of the Kongo Kingdom was the bloody struggle between noble houses fighting over the kingship.

The Kongo civilization is unique in their playing strategy. The player must choose between 4 ruling Dynasties that can ascend to the throne: The People's King (House of Kilukeni), the Rich King (House of Kwilu ), the Weak King (House of Nsundi) and the Warrior king (House of) Kinlaza. Each unique King will have his own bonuses and unique set of units. Choosing a king will also affect the consulate allies you can choose.

1. Manikongo, the King of Kongo

African King's Special Ability : now African Heroes (Kings) will have their own unique special ability. It is called "The Royal Pets". The African King can unleash a royal pet (leopards for Oyo and congo lions for Kongo). It's a free but temporary unit with furious attack. Additionally, you can increase the number of summoned royal pets by researching "Royal Cages" from the Town Center.

The Kongo Civilization starts with a King. To advance to the Colonial age, the Kongo player must choose between 4 rivalry noble houses to rule the kingdom. As the player reaches the colonial age, an Assassin will kill the current king and a new king (with new visual) will appear at the kingdom. This is all in-game feature! 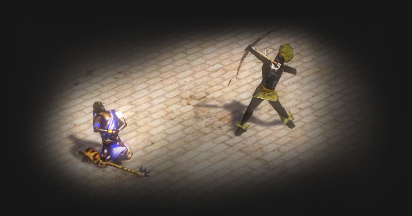 Each King and Dynasty will have its own unique set of bonuses, units and techs. The following table summarize each dynasty bonuses: 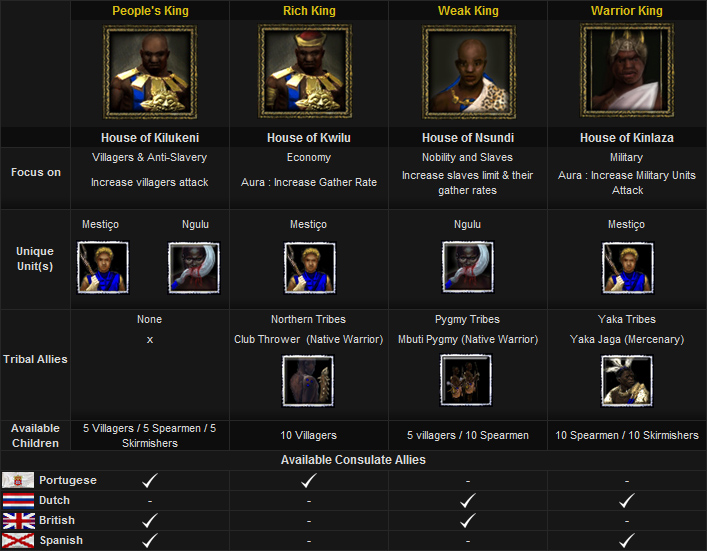 Unlike other civilizations, the Kongo have their unique aging style. Once a Dynasty is chosen, the Kongo has different unique "Polities" for each dynasty. A Polity reflects the political approach to deal with the rivalry noble houses. For example, if a Warrior King is chosen, the Kongo player will have 3 Polities to advance to Fortress Age: 1) Crush Policy 2) Tyrant King 3) Foreign Intervention. Unlike Politicians, Polities have extra bonuses but also have negative aspect. The below describes an example of the 3 polities available to the Warrior King:

The Kongo player can choose between 4 different religions: Catholicism, Kongolized Catholicism, Kongo Traditional Religion and Protestantism. Each religion will have its own unique priests and techs. A full guide about the new Religion System will be published in the near future.

4. Slavery, Exports and the African Consulate

Slavery was a major aspect within the African Kingdoms. Rivalry fighting kingdoms subjugated their enemies into slavery. Criminals within the kingdom were converted into slaves as punishment. The interaction with the European powers and their ever growing demand for slaves led to the mass scale slavery of the Atlantic slave trade. All African kingdoms starts with a slave and can further train slaves from Town Centers. All slaves owned by Kongo or Oyo have better gathering rates by +5%. However, all types of slaves can be captured by other players (like sheep).

For the African Kingdoms, the slaves represent an invaluable resource either as a working force or as a commodity to be sold to the Europeans. All slaves owned by Kongo or Oyo automatically generate exports even if they are not gathering anything (unlike the Asians exports). Auto-generation of exports by slaves can be enhanced by consulate allies techs.

This a totally new game play and unique to the Kongo civilization. Like other villagers, Mothers can gather all resources though they cannot construct buildings (remember they are pregnant!). They are also 10% better at gathering food. The most important attribute is that they give birth to children for free. These children can grow-up to be villagers or military units.

Children: units that literally come out of mothers! While they are still in childhood they cannot attack or gather resources. Children can grow-up to be villagers, spearmen or skirmishers. They grow-up faster near Mothers. They cost no population which gives extra pop bonus for the Kongo player, but they are also subject to kidnapping by other players as they can be auto-converted much like sheep.

Tips on Growing Up: A Child starts with 0 food inventory which indicates his growing status. Once the child reaches 100 food in inventory he will grow up into full man (or woman!). Villager-Child can only gather food resource but +10% better that regular villager.

Mestiços are elite musketeers of a mixed race of European and African lineages. They tend to be Portuguese culturally and to have full Portuguese names. Mestiços formed social and cultural allegiances with Portuguese colonists, subsequently identifying with the Portuguese over and above their indigenous identities. In the game, the Mestiços are similar to the European musketeers though with less attack. However, they compensate with having a special sharpshoot attack that does extra damage (they will use it every 15 seconds automatically). They also speak both Portuguese and indigenous languages in the game. If the player chooses a British ally from the consulate, the special attack will be changed to "Grenade Attack" granting the Mestiços the ability to hurl grenades at enemies' infantry units automatically.

Agile fast runner, almost naked, who can run as fast as a horse and armed with fast-stabbing deadly dagger. Good against skirmishers and artillery. Pombo attack ROF is 0.75 (i.e. 2 times faster than regular melee attack).

Ngulu is a Kongolese deadly warrior armed with executional sword. Good against infantry and villagers. The Ngulu warriors have special ability called Execution: they have a small chance to kill any infantry or villager instantly in a single attack.

Kongo native warrior recruited from giants of Northern Tribes. The unit is classified as a "Minor Native Warrior" and it is a unique unit that is only available to Rich King (House of Kwilu Dysnaty). Club Throwers are capable of throwing off clubs embedded with sharp animal and fish teeth that wipe out infantry, dealing melee damage at range. This is a new type of unit that it is a melee unit but deals melee damage at range (like the franks axe thrower unit in AOE 2).

Deadly mercenary that is only available to Warrior King (House of Kinlaza Dynasty). Armed with a throwing axe called Nzappa Zap, the Yaka Jagas are classified as Light Infantry Mercenary (skirmisher-type). The Yaka warriors had the reputation of ferocity, courage and warrior culture. In the game they have a special ability called Pain Indifference: Yaka Jagas regenerate hitpoints even if they are fighting, moving or not idle at all. 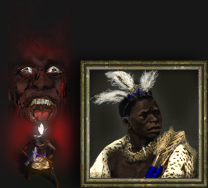 Once a Weak King (Dynasty of Nsundi) is chosen, the rivalry Nobility will be available in game. These fat-ass guys care only for themselves and collecting wealth and power. They manipulate the king as he becomes a puppet at their hands. The Noblemen are powerful units that can be trained from the Weak king. They have a totally new concept, the Wealth. There are 4 types of Noblemen for each resources: Food, Gold, Wood and XP.

I really like the depth of the new civilizations, each one feels quite different with each other! Two questions though: 1)Are Mothers "trainable", or will female Villagers turn into these? 2)I fell in love with this jungle map, is it a test map or will it be included?

1) Yes mothers are trainable but limited to 5. The Kongo starts with 1 mother and 1 child. All these features are in the Beta released.
2) I am working on new random maps, so yes this jungle map will be included in future.

Really rooting for this polished mods in Age of Empire 3

Nobility: "These fat-*** guys care only for themselves and collecting wealth and power. They manipulate the king as he becomes a puppet at their hands."

This description is gold :P