Being a small team with limited resources, and because we are essentially minimalists, we are always thinking of ways we can get more out of less. We try to reduce the amount of artwork we need to create, reduce the code we need to write, etc. With this in mind, here's some background on the roles of the knife and pistol in Natural Selection 1.

The knife in NS1 wasn't originally part of the game. I realized early in playtests why most or all FPS games have a melee weapon that you spawn with - when you run out of ammo you need to have a CHANCE to defeat other players. This was magnified in NS1 where you could be out in the field and reliant on another player (the Commander) to give you ammo. So we knew we need a melee weapon in NS2. However, the fact is that players often spend a significant amount of time using their knives on high health alien structures. That is, they stare at a big stationary object and hold down their left mouse button. And wait. There must be a way to lessen the monotony of this.

And what about a pistol? When we were thinking about how to improve the pistol in NS2, we realized that the pistol in NS1 had only one really good use - a backup ranged weapon that could be used when your primary weapon couldn't be used (ie, it needed to be reloaded or needed ammo from an armory or Commander). The long-range accuracy of the pistol along with it's high damage and essentially infinite rate of fire (which was added to give it more skill, but was commonly scripted) made it sort of an uber-weapon. We knew we didn't want it to function this way in NS2 but the question was, what to do with it?

So this is what we desired in NS2:

With these goals in mind, we started thinking about a "hybrid" weapon that solved all these problems. This is what we came up with: 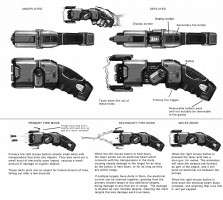 You can see from the notes in the concept largely how it functions, but let me describe it in a bit more detail. The primary fire ability fires transponders into ranged targets. This is our basic pistol functionality and will let you try to stop a fleeing Lerk or nail an assaulting Skulk before your screen fades to black. The alt-fire ability functions as a basic melee attack, not unlike the knife.

The transponders both do damage when they hit and also stick in for awhile (either for a certain amount of time or perhaps fall off relatively quickly from moving targets and stay for a long time in stationary ones). By charging the primary attack, you can send electricity through the transponders, doing damage to one or more targets in range. This would start as a harmless light electric shock, but over time would grow to massive damage. This makes it ideal for taking down structures (high hit points, stationary). Because it can work through multiple targets too, it means you might be able to take down a few structures without too much effort or time. It would take long enough for the alien team to respond but not so long as to be tedious.

Besides achieving our design goals, we think there are going to be a lot of other cool things players do with this weapon. Chaining of electricity, holding the alt-fire to form a "shield" that does damage if an alien runs into it, possibly even electrifying marine structures. It also means one less weapon to concept, model, texture, rig and animate!

That's a pretty solid solution you've got there. I've never really been a fan of the "strong pistol" concept because it makes absolutely no sense. It wouldn't be more accurate, because it has a shorter barrel, and it wouldn't be more powerful, because the caliber is smaller (unless you're really firing some kind of hand cannon, like a .44). This seems like it would be both decently powerful and accurate, as well as not being stupid in the process.

Will it actually stun the enemy? I think this would be a great defense against Skulks, who typically just tear through the first marine they see, if it has even the slightest paralysis effect. If I may, I'd suggest it drains the stamina bar for a second. You know, if you guys still have the stamina bar implemented. A stun feature like that would probably only work effectively on the smaller targets.

O.o That would make for an awesome early upgrade! If that makes sense in the NS2 gameplay design, of course. To have an early upgrade to this awesome weapon (and I speak in terms of conceptual design, since it's obviously not that powerful, what with the damage taking time to build up) that allows it to stun enemies for even an instant or drain their special abilities would be really cool. Or even a non-early upgrade, but I feel that that might throw NS2 back into an "exponential growth" power curve where the more advanced into the game and upgrade/tech/resource you are the more you can totally rape the earlier game elements (which is obviously not desired in a FPS environment).

I just made a picture in my mind: Onos STORMING and ROARING towards a marine, the marine just grabs his stun gun and shoots.. *ZAP* Onos falls on its side with spasms like when you taze a normal person...
:D

Yes, I think the introduction of an elecricity based weapon warrants different treatment altogether. I suggest looking into some possible status induced effects that can at least improve the survivability of a marine, if not the combat effectiveness. But hey, we're all just a bunch of raving fans.

Tazers look fun. Pistols are fun. Tazer pistols will be badass! I want to teach that bum rushing skulk a lesson. Bzzt.