There are a lot of things to tell you about since our last update: global building system, NPC behavior like finding a group, choosing a leader, building first settlement. Also I'll tell you about settlements themselves, about ways they can be built into and how NPC can do their "sweet homes" better and better".

Hi! Cyfieithydd is on line, and today is news time!

There are a lot of things to tell you about since our last update: global building system, NPC behavior like finding a group, choosing a leader, building first settlement. Also I'll tell you about settlements themselves, about ways they can be built into and how NPC can do their "sweet homes" better and better". Besides, I've worked on social-system in NPC groups and ways of social interaction between group members. And in the end I'll tell shortly about some graphic improvements, because Unity 5 is finally out. So, let's start.

Like every aspect of our project building-system should be realistic. I tried to do so, that every of its aspects looks natural and logic and won't broke game atmosphere. And of course building can't be separated from many others game aspects like socialization and interaction between NPCs. So, hope i didn't bother you and we're ready to talk about all this stuff in details.

When NPC appears in this world, the first thing he tries to do is to find a group. Interaction between NPCs is very important aspect of the game, which creates the feeling of the living world, that can evolve in every unexpected way. 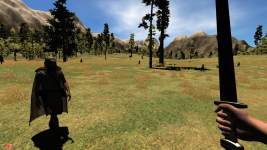 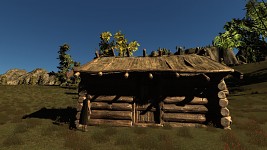 After finding a group NPC becomes an important member of group social system, and its success depends on all NPCs actions.

2) Creating or joining a group

Group appears if at least two NPCs found each other. Of course, after group was created, any NPC looking for the group nearby, can also join it. Group members choose a group leader, who decides, where this group should make first settlement, how many houses they have to build, how much food they should gather etc. If leader is not good enough, group members can choose a new one. 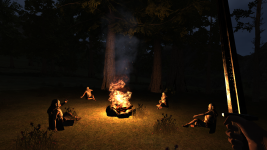 Leader tries to choose best place for the settlement: with water nearby and resources like forest and rocks. And if everything is ok, group starts to build their first settlement.

If building place is found NPC marks it with scaffolding. We've made smart system of scaffolding, that includes such things like finding flatten place, nearby houses position etc. The distance between two structures is counted by script, so two buildings wont cross each other. 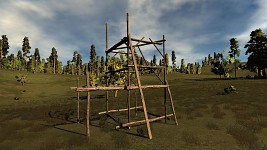 After scaffolding is set, NPC will find closest resource nearby (wood, stone etc.), gather it and take to settlement storage. Player will see how many resources are gathered, because its amount has visible realization. Settlement has common storage for building-needs, but if NPC wants to collect more resources, storage can be set near its house.

If there are enough resources to build a house, NPC begins building-process. The result is looking like this: 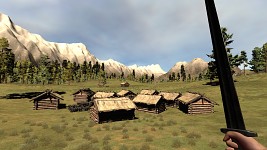 Any settlement is unique part of this world, and can be developed by its habitans in any unexpected way.
Settlement can change its type. The whole scheme is looking like this:

Also settlement contains such important structures like storage, market place, tavern or blacksmith. If there is a person in settlement, that is good in blackmithing, this person will definitely build a structure for these needs.
Player can also build a house in any settlement, or even try to become a leader if leadership skill is high enough.
Remember, that we're talking about NPCs now, for the player everything is a little bit different. For example, if NPC wants to join the player, we can negative that request or ignore building a village, so NPC will leave us because we can't satisfy their needs. This first try to make NPC intelligent and independent was success, and from now our task is to make their behavior more life-like.
As small bonus we want to show you screens, where we put 60 NPC on the map. The result was wonderful: 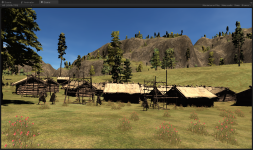 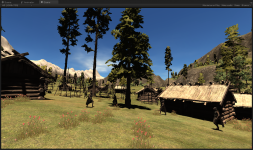 Besides, i've start to make inventiory for the player. For example, we can hold sword and torch, using quick slots. Now nights are not so dark and full of terrors:) 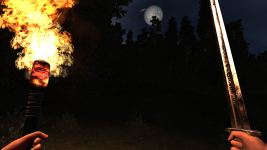 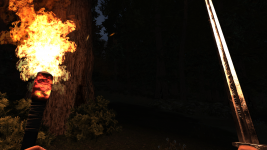 As youy know, Unity 5 final version is out, and we want to show you some features from it, that we've put into our game. 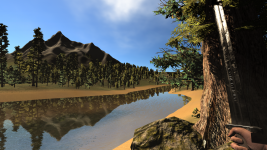 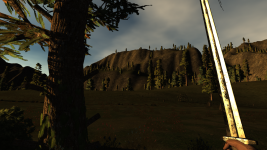 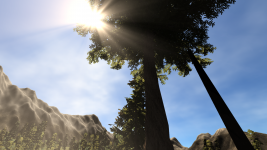 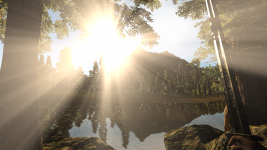 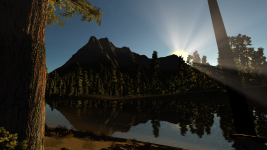 So, as you can see we're working hard and we really want all of you enjoy our game. In summer we'll start test our BETA and also we'll try Kickstarter. If all goes well, you'll already play Kingdoms in autumn, if we get Greenlight. We've made our concept page on Steam-Greenlight, so, you can support us there right now!

Our studio is always intrested in enthusiastic people who loves videogames and its development. If you want to try to work as modeller, animator or artist in our company, you're welcome! Just write me, if you're intrested;)

Hope you enjoyed all we showed today! Soon we'll make a gameplay video with all these features i told you today, so watch for updates!
Good luck and till next time!

excellent, but i have only one question, Do u plan to put to this game one important thing - horses? Becourse for me its realy important and i think that mount and blade made good game becourse of due to put mountinable horses and fights on horses! So, its give u'r game more realistic features and atmosphere!
I ever loved and will love medieval rpg games!
Thank for u'r works!

PS: Sorry for my english, im from Kazakhstan!

Thank you and dont worry, we'll definitely make horses, because territory is really huge - 32x32km with no fast-travel;)

wow 32x32 is pretty good, arma 3 only has like 20x20 or something and that's traversed with planes and helos and cars so sounds awesome

awesome cant wait to try it

Wait till beta-test in summer)

Wow this sounds amazing!
Extremely ambitious but very very cool.
Seriously if you guys deliver on this it could be one of the most innovative RPGs in a very long time.
Good luck!

Also before you make a kickstarter you should definitely advertise it a bit more.

First of all, thanks, we try to do our best!
Yes, we definitely need some advertisment before Kickstarter, we're thinking how to do it, hope all goes well.

Great game sounds epic especially with the dynamic NPC behavior. In an earlier blog you said colonists that arrive can affect the political or social behaviors so will it be possible for say and army of barbarians or bandits that arrive be able conquer vast parts of the land?