A simulation-based fantasy city-builder, launching next week on Kickstarter!

Posted by RocketJumpTechnology on Mar 20th, 2017

Today I realised that we've already been posting these dev logs for over a year now! Going to have to start including the year in the title rather than just the month, or perhaps move onto something different (more on that later). First though, it's with great pleasure that we can share the first trailer for King under the Mountain, produced by M Joshua:

For those of you who have only just started following us, it's worth mentioning that this is an extremely early "pre-alpha" trailer to coincide with our launch on Kickstarter and Steam Greenlight. We've a big list of features still to come on the roadmap, and what's shown now should only really be counted as a proof of concept prototype.

Speaking of Kickstarter - we launch on Monday March 27th at 18:00 BST (Click here to see what time that is for you)! Everything we've done for the past year has been building up towards this event and we're incredibly excited its nearly here. A successful Kickstarter campaign will mean we can spend a lot more time developing the game and adding more content, rather than taking on contract work and side jobs to keep the lights on. It'll also enable us to work with some extremely talented and creative people that can add a lot to the project, which we just don't have the budget for currently. If you like what you see of King under the Mountain, please consider supporting us on Kickstarter (you can sign up for a one-off reminder email here) which really will let us kick-start (sorry) development way beyond what you've seen thus far. As a special preview, you can preview the upcoming campaign page at kickstarter.com/projects/rocketjumptechnology/921418061 and we'd love to gather any feedback from you guys!

Our primary goal in preparing for the Kickstarter was making sure we have a working, playable build of the game to share with the world. Too many gaming Kickstarter campaigns are built on concept art and mock-ups without a real game behind them, which have a high chance of running into difficult technical challenges when it comes time to put the designs into practice. There's been a number of Kickstarter campaigns for games which have disappeared without ever delivering anything into the hands of backers, unfortunately making it a lot more difficult to find success on Kickstarter as people are (quite rightly) wary of developers without a proven track record.

We decided the best we could do was to release a working build that shows the basics of gameplay, and (hopefully!) works quite well on a range of machines. This should go a long way to proving we're capable of building the game and delivering on the promises in the Kickstarter campaign. We've also included multi-language support and a range of translations (currently English, German, Spanish, French, Italian, Danish, Norwegian, Swedish, Finnish, Russian, Polish, Hungarian and Portuguese) even though its so early in development to help reach the widest audience of players possible. And here it is: Indiedb.com

If you discover any issues, we have a public Github repository for tracking them at github.com/RocketJumpTechnology/King-under-the-Mountain-Issue-Tracking so please get involved if you discover a crash to desktop or other bug, it would be much appreciated and we'll definitely get around to fixing it.

Also this month, our concept artist Anthony Avon finished a concept for an Orc settlement: 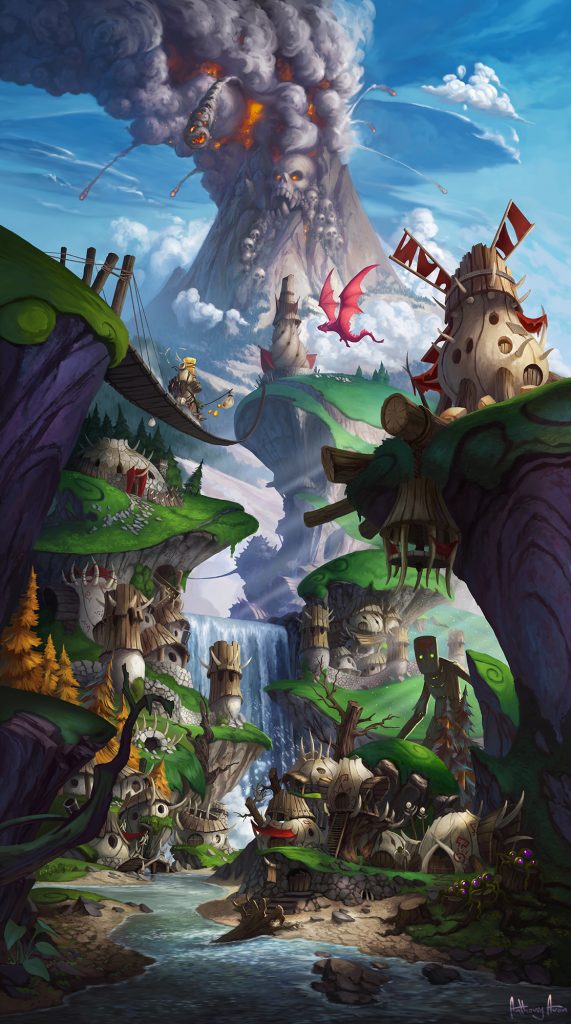 As always, Anthony's work incorporates an incredible amount of detail and wil

l really help inspire a lot of unique and interesting mechanics into the game. Also, this piece was featured as a daily deviation on Deviant Art, congrats Anthony! One of the key features of King under the Mountain is the ability to play as different fantasy races. This will really come into its own when players are able to go on adventures to other settlements, particularly as the different races will have unique resources and equipment they're able to produce, so you may want to raid your neighbours for specific items! Orcs in particular will want to raid others for food and supplies as they are loathe to grow crops or raise livestock themselves.

Now that we're on the cusp of launching to Kickstarter, we've started reaching out to Youtubers that we thought would be interested in the game, and have already received some great coverage! Here's a very in-depth video by Weem not only describing the game as presented in the playable prototype, but a great explanation of where we're planning to take the game too:

And also, some very enthusiastic coverage by Kage848:

With all the Kickstarter hype building, let's not forget we'll also be exhibiting at EGX Rezzed in London from March 30th! If you're attending it'd be great to swing by our stand (we'll have several members of the team there) to say hi and chat about the game, but more importantly, nab one of these sweet pin badges: 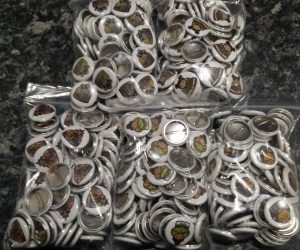 Phew! A lot's happened this month, but I'm sure we're set for even more next month with the Kickstarter campaign (and we'll also be on Steam Greenlight, so stay tuned)! This might mark the end of the monthly dev blogs too - if the Kickstarter campaign is successful we'll be spending a lot more time on the game which will also mean we'll switch to weekly updates as there'll be more happening to keep you up to date on. Finally, great news in that we've hit our goal on Thunderclap! Not only that but we've sped past it thanks to all the coverage on Youtube. Every bit of social reach we manage for the Kickstarter campaign can make all the difference, so for the last time(!) if you'd like to see this game get made into something special, please sign up to the Thunderclap at www.thunderclap.it/projects/52441-king-under-the-mountain and help us get the word out! Thank you :)