Kenshi is greenlighted to be on Steam, and all existing owners will get Steam keys!

The big news is that Kenshi is one of the first 10 games to be Greenlighted on Steam. That means when the game is finished, in the next... 2 years maybe... Kenshi will be for sale on Steam.

Any one who has already bought the game will get a Steam key, so don't be shy to buy early. The final game will cost around 3x more than it does now, so you'll be saving money and helping development.

Now on top of that good news, tons of extra sales have been generated just from the run-off from the games Greenlight page, this will help to continue funding the new artwork.

Speaking of artwork, it continues. If you have played the game you will be familiar with the character customisation, and how you can adjust the body proportions of your character. Well on top of that, there will be an adjustable bump-map that shows the strength and health of characters.
So a character with a Strength stat of 100 will look more like the guy on the left, a newly created character with zero stats will look like the guy in the middle. 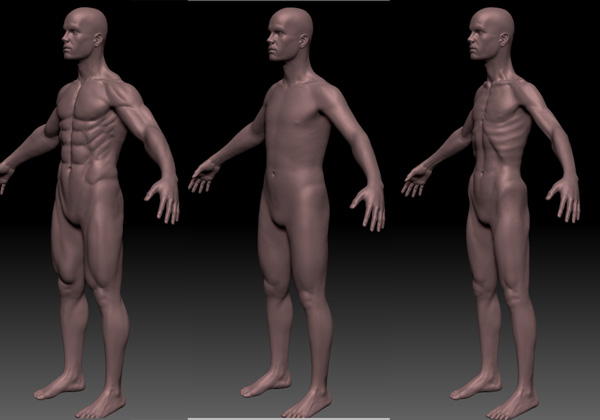 They can be blended of course, so with a Strength stat of 50 it would be half way in between the two.
The one on the right will be used for slaves, desperate bandits, and when your characters are imprisoned/starved for a long time.

Nice keep up the good work.

Brilliant! On both parts!

I started 6 years ago.

Do you have a time frame at which you can determine these higher resolutions will be implimented into the game, and will there be starting a new faction option available?

Guys in case you didn't get it:This is called an INDIE game for a good reason (most of them are extremely long to develope due to a lack of finances and staff) and they are our future unless you guys want to see more original games like Call Of duty franchise or sims 3 and their millions of expansions (as well as many other games) have faith in these independent devs or else we're ******.

BTW: Minecraft is extremely outdated and was indie when it first began.

sims 3 is not that bad, but yeah the DLC stuff is BS. they make DLC for the same DLC that came out in sims 2. it should be built on, not made into DLC for sims 3.

Try to look on newest games like BF3 o Maybe Crysis 2, And what be for next year there be Crysis 3 lol.

Who care if the game visual is outdated? Only the gameplay count! Every visual things are a bonus.

And a game itself cannot be outdated.

Eh, yeah, I'd be careful. The last game that took 8-10 years to release ended up terrible. (DNF)

Course I have faith in this game, but by 2 years I'd forget the game exists. :P Well, do your best, the game so far introduces great ideas that I really like.

I think the DNF failed because it got thrown from a one studio to other over the years.

Diablo 3 spent years in development and turned out just fine.

Wow! That's great for you, congratulations! Greenlight is starting to get on the right track. Can you describe a little bit how this will change/help your development? Will it help financing the development, too?

A lot of extra sales are coming in from Greenlight, but for now I'm treating it as a sales spike. If it keeps up though, it should speed things up tremendously.

I missed this one completely. Just read the description and features and it does sound very impressive. Also, great work with the body morphing depending on strength etc. It reminds me of Fable, where if you eat bad food you get fat or you eat meat and you get 'bigger'. But to me it was never really perfected properly and kind of pointless in the end. Hopefully this really makes it special. The main thing is timeframe. Muscle takes a long time to develop, and be lost. So will time and activities dictate what muscle is developed and how quickly?

Awsome... But when will all these awsome things be implimented??? Being the unstopable scurge of the desert is fun for a little while but where is the survival aspect I'm looking for, and that income that will come to my city? But I know I must be patient. Perfection does not come all at once after all.

Congratulation to the team, to have made it into the top-ten.
Well deserved IMO!

A team of one man :D

i love your persistence with a game that you have a great idea for, i will never stop watching this game progress. you never cease to amaze me with your ideas, which is why im proud to have bought this game

This Is awesome! Good this it is going on steam also, more places of marketing to get to.

What if I buy the game now? Do I still get a key?