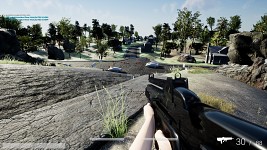 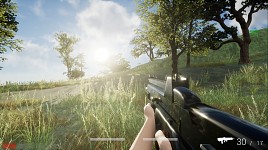 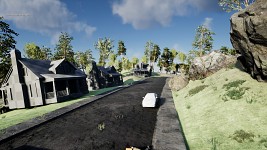 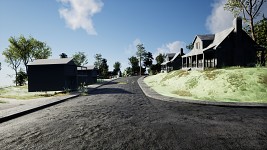 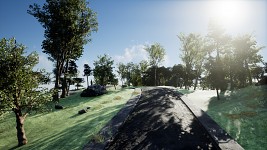 Hi everyone and welcome to the June monthly update for Trepang2.

As you can see from the pictures above, I've been experimenting with larger, more open maps, while adapting the AI and gameplay mechanics to adapt to it. I've also completely removed static, baked lighting and replaced it with fully dynamic real time lights. This means day light cycles will be possible :)

Previously, the AI and combat in general was designed only for claustrophobic close quarters shootouts. This is still the main highlight of the game, but clearing out hallways and corridors over and over again would get boring pretty quick.

Here's a video of a quick prototype I made, mainly for testing performance and AI.

It's an interesting concept and it's been a good learning experience on creating and optimizing larger maps now. The AI has also been hugely redesigned to adapt to larger organic worlds (the AI before only worked in blocky maps). The placeholder "psychic" behavior of the NPCs have been completely rewritten so they will search for lost targets realistically.

Here's a video of me joining in the fight.

As expected, the map isn't really fun to play, since it has no level design (it's just a bunch of roads, trees and houses arbitrarily placed around the map). As a test environment for AI and performance it was definitely successful. It doesn't look too bad, and performance is bearable - not bad for a quick prototype.

However my goal isn't to make another boring "open world survival" game. With modern tech it's pretty easy to make large open maps, but good levels have to be carefully designed and tested, and that's what I'll be working on next.

I almost forgot to mention, I'm working with a talented writer/voice actor to add personality to the enemy soldiers. You might have noticed some newly recorded dialogue in the demos above. It's still very early WIP, but we have the basics for the NPC combat dialogue working. We are working on a "dialogue system" where the NPCs can talk to each other as they plan their next moves. More info on this soon!

Look out for some big updates in the coming months. I've got some interesting ideas for setting and environments, as well as enemy factions. There might even be a few surprises ;)

Keep in mind that these test environments are made mostly of placeholder assets, so it doesn't represent the art style that I'm going for.

As for the next demo, I'm aiming for sometime around late August - early September. It's going to be much less linear than the last one. Not exactly "open world", but it'll be a cool sandbox type environment.

That's very cool. I like how you added NPC dialogue.

Thanks! It's only a basic implementation so far. There will be much more interesting NPC dialogue soon :)