In this update, we'll go over some of our recent changes, share some current progress, and talk about what our goals are for the near and distant future.

We're all very happy to see people enjoying 1.3 and its new civilizations. Our recent 1.3.2 patch has addressed the majority of the issues with the new AI, but we're continuing to look over the scripts, as well as examine reports from our players. For right now, we wanted to share some of our recent progress, and go over our goals for the future of Expanding Fronts. 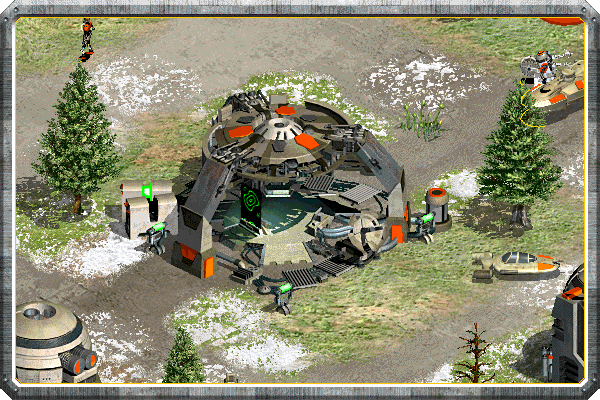 Galactic Battlegrounds has always had a small but dedicated community. We're looking to help build that community through a number of events, the first of which we're showcasing today: the Continuous Screenshot Competition. Hosted on HeavenGames, the Continuous Screenshot Competition has been a fun way for the Age of Empires II's community to share their creativity with the Scenario Editor since 2006. Players compete in a weekly or bi-weekly contest to design screenshots following a theme selected by the previous round's winner. We're proud to bring the CSC back to Galactic Battlegrounds, and the first round is happening now! The theme of our first round is "I have a bad feeling about this." All you need to participate is a HeavenGames account. Sign up on the forums and submit your entry! While you're there, you can check out our downloads section, and try out thousands of user-created campaigns, scenarios, random map scripts, and AI files - or upload your own! We're looking forward to seeing your creations! 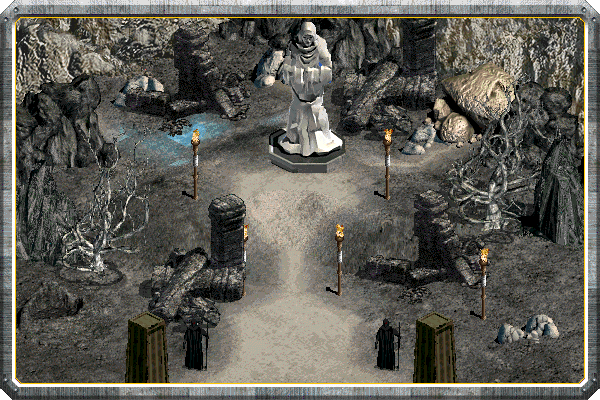 We're considering other events as well, including organized community multiplayer matches through GameRanger, tournaments, videos/streams, and Community Spotlight articles that bring attention to some of the best pieces of user-made content from across SWGB's history. And of course, there's our community Discord server, where players can organize matches, talk strategy, share their creations, and more. 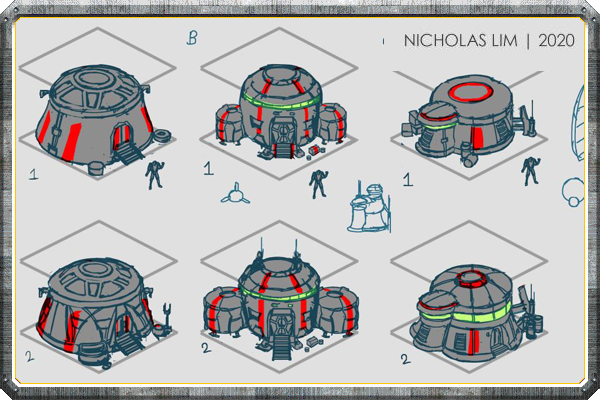 It will likely be a while before we attempt to add another new civilization to the mod, but we are looking to bring other additional content before then.

Confederacy Architecture: One of the many elements that make Galactic Battlegrounds special is that each civilization features an entirely unique look for all of their units and structures. When we initially split the Confederacy apart from the Geonosians, we had very little in the way of artists on the team. This necessitated that we use placeholder assets for the CIS buildings. In this case, gray-scaled versions of the Trade Federation building set. Since then, we've acquired a collection of exceptionally talented concept artists and modelers, and can finally give the CIS a much-needed visual update. 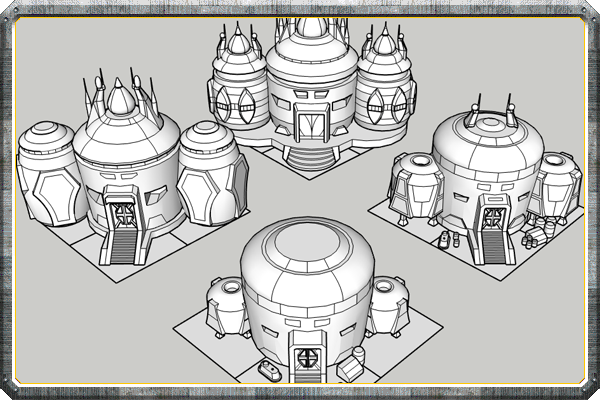 Translations: We're working with a number of members of the community to help get translate EF into non-English languages, as well as correct some issues with the base game localizations. Thus far, volunteers from our community are working on translations for Spanish, French, Portuguese, and Russian. The completed translations will one day be included as selectable options from the configurator.

Improved Soundtrack: The 1.3 update to Expanding Fronts included a new medley of tunes from all films in the saga, and while it's been well-received, it is mainly a placeholder while we look into methods of building a more dynamic music system that will allow players to create and use more dynamic music playlists. More on this will be revealed at a later date.

New Campaigns: Last summer, we detailed our intentions to add new campaigns, starting with one focused on the Naboo and Gungans. Work on these missions was given a lower priority while we focused all of our efforts on completing the new civilizations, but the plan to finish these campaigns hasn't changed. 1.3 includes a taste of our upcoming new singleplayer content with a mission based on the Battle of Jakku, the first of hopefully many missions to be included in our 'Battles of the Galaxy' campaign. Much like the Battles of the Conquerors campaign in AoK, this campaign features a series of historic battles from all over the Star Wars timeline. 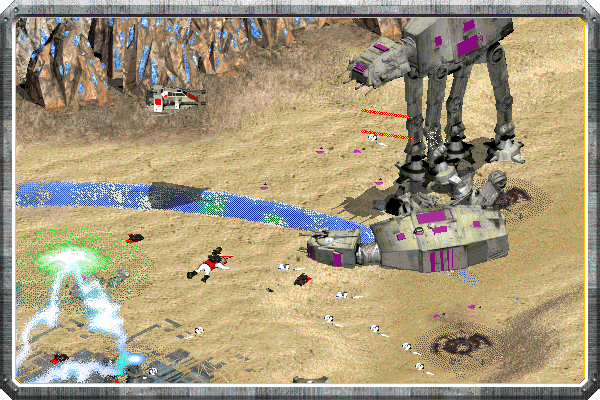 Once again, we'd like to thank everybody who has supported our project over the years. Since we've started the project, we've managed to build up a fantastic community of players and creators across HeavenGames, ModDB, YouTube, and in our Discord group. We're hoping to bring many more great updates to everybody in the near future.

By "dynamic music system", do you mean an in-game jukebox akin of Command & Conquer's?

Not quite that in-depth, but something better than a static, 30+ minute audio track.

Depending on the era played? Only CW music if playing with the Rpublic for example

Guys you do an amazing job ❤❤

I know you say that it will be some time before attempting to add another civ to the mod, but i want to ask, are there any other civs that you might like to see created as playable factions? I know I've seen quite a bit of Old Republic and Sith Empire requests all over, but having a few kinda special or significant civs would be really nice, like how we get the Naboo, Gungans, and Geonosians as independent groups. Groups like Mandalorians or a sort of tatooine themed Hutt Cartel could bring interesting diversity, some more sort of Neutral civs like the Zann Consortium to battle with, though I could definitely see how it would be a long and complicated process to build up those civs and flesh them out to compete. Just some thoughts I guess.

Good day! Thank you for this update. Your mod has meant so much to me in the bleak torpor of a 3rd-world quarantine. May I respectfully inquire regarding permissions on the release of the Expanding Fronts-friendly Genie Editor? Again, thank you so very much for all you do and all you are for us, your community.

No definite timeline yet, but we're working on it.

"from all over the Star Wars timeline."

I would like to see the Yuuzhan Vong, Umbarans, and the Mandolorians, Would that be possible?

Are ARC Trooper and Clone Commando available in Fortress in Standard Game ?

Is it possible that one day you will bring an update that includes the Spanish language? and I like your work, continue like this, I would like to see the clans of Mandalore as one more faction to play. It is just my opinion

Hello, Excuse me have the support of Chinese characters?

HELP! HELP! HELP! The windowed option; at 1080 and 1440 resolutions, do not display the HUD interface, only the game map! Why? How is this helped? If I choose fullscreen the game visuals are glitched black and white.

Edit: Ok, fix if I disable GUI scaling, it's ok but please add custom resolution option so I can use 'integerscaler' program -- THE offered resolutions DO NOT WORK WELL!

Hello, what is your operating system


Give trade federation/Hutts/CIS a Feitoria equivalent building, More stealth units: make a race that can have a (stealth base), a race that doesn't need power nodes, a race with a defensive tower that can be upgraded to a 5th level, more jedi/sith tech depth, make almost all gungans buildings and units amphibious with a bonus for being in water, all biological wookie units get benefit from the exclusive healing upgrade, a Hutt recycler/shredder building, widescreen support, and more tileset variety

Add a saboteur style unit, fireship equivalent, and an aircraft equivalent too would be sweet. Make one race have all anti air units capable of shooting ground with an upgrade. Hutts can't build many mechs or artillery in favor of more infantry variety and another fortress unique unit like the Aztecs Mayans and Inca from aoc. Make hutts not get a jedi temple, but instead get a donjon equivalent weaker fortress building that trains several unique infantry types and houses the holocrons at tech level 2 instead. Hutts have the strongest bounty hunters in the game, and can carry holocrons. make one of the races have the ability to garrison into prefab shelters. Sea walls from aoe (maybe gungan exclusive) Add allied unique mercenary units too. Add the Star Forge as a unit/buding like death Star but with the ability to create units. Make the building style of the High/Old Republic have the aesthetics of Radiant VIII from phantom menace. Resistance should get Superwalls unique building that can block aircraft from passing, but air cruiser has extremely short range. Every race should get invisible submarines, but gungans should get an additional much stronger sub type. Add as many historic heroes as you can. Make Naboo get the Feitoria building instead. Add the clean millennial falcon from "solo". Droid control ships too. Naboo Tileset should have insanely tough water animals and food rich in water

Don't be biased against China, I wonder if support the Chinese language,I can have Chinese Kung Fu,Don't be arrogant！

China is a great country, the future belongs to China, remember this sentence！