This news article will tell about almost everything going on for the next version of the UA mod (1.73), and update what's happening for the 1.72.7 release!

Note: If downloading from Mega, make sure you either use Google Chrome (or Chromium) or install the Mega browser extension, otherwise the file won't be saved correctly as it is over 100MB. Official explanation here. 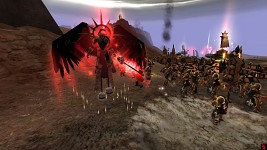 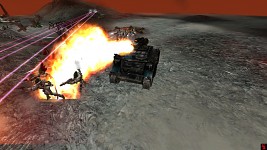 - This version fixes the deepstrike hotkey also (E to m). It will allow better access of deepstriking. To have this PROPERLY added ingame, please go to:
- DOW Directory/profiles/*user*/*mod*(ultimate_apocalypse)/keydefaults
- search for "deepstrike", and set the hotkey to "M", or any shortcut you want. Feel free to change up the hotkeys as you like.

- This version fixes the Tyranid multiplayer sync error, many balance changes, AND fixes the bugged Dark Eldar ai that was since broken in version 1.6 of the UA mod.
- Less crash to desktops, better performance, better balance, more bug fixes.

As some of you may already know, version 1.73 is planned in progress! Because of some very generous donators, the next version is in progress, starting this week (5/7/13). What is version 1.73 and what will it contain?

Version 1.73 will be the most glorious version yet that will involve a main dead on focus for XP3. The Kaurava Campaign, Survival, the Arena, and Zombie Apocalypse modes will be remade with full dedication for the next few months, featuring new ideas and new epicness to play with. Along with this, very many Ultimate Apocalypse campaign adjustments will be added along with Mission 3!!!

The Ultimate Apocalypse Campaign as you all know seems a little bit stiff on the story, and for the most part, no dialogue and speech. Version 1.73 will definitely fix both of those, and all thanks to the man with the brilliant ideas: Jazz Sandwhich, UA mod team member, VO, script writer for the UA mod; XP3 will be remade to skirmish epic, perhaps better.

Along with this, version 1.73 will fix some balance and adjust skirmish gameplay definitely for all factions! There is still one more gameplay total revamp concept to get done, and that will be in place for version 1.73.

Now what about the Secret Codes???

Ah yes, those. They will be out when 1.73 gets done. I am very sorry for the inconvenience about the 1.72 release and promised codes for that, but... we ran out of time, and the codes did not get done. What the codes will contain is the "Grand Puzzle." Unlock the codes and unlock the secrets of the Grand Puzzle, and win. It is still in conceptual stages.


Version 1.73 will take months to complete and will not be rushed!

Version 1.73 will take a while to get completed, because, guys, we are talking about a total revamp of the campaign, along with that, new story development, and polish of the Kaurava Campaign plus all 9 strongholds. Version 1.73 will be released in the next 3 months if we are lucky. That means:

In case if you haven't noticed, version 1.72 is now campaign playable, so play it today! All it lacks is tune ups, but version 1.73 will revamp this entire thing to everyone's liking.Oh and play as Tau in version 1.72.5. *hint hint*So that is our plans! All bug reports will be fixed in version 1.73 as well, and new content will be in play for version 1.73. So await it, spread the word, and prepare for the release of 1.73 this year!

so.. only minor bug fixes and multiplafer fixes? no new units or anything like it?

a silly question does this mod fix the wide screen problem with dawn of war? or should i just make a fresh install of 1.3?