Way back in 2010, I put out a little-known mod for an old game called Neverwinter Nights. The engine was outdated and the community was evaporating, but still hundreds of man-hours went into this mod with the aim to do something completely different: take this notoriously hard-coded dice-rolling RPG and make a third-person action game out of it. With a concept based on an idea I had for a novel, the mod took the combined efforts of the D20 Modern content team, the CEP haks, and loads of new scripts to try to craft an experience unlike anything NWN had seen before. We had the dialogue, the sound effects, the music, the story, then we got to the battle and... kinda hit a wall.

To give you an idea of just what we were trying to attempt, let's look at how battles play out in regular Neverwinter Nights. You've got your character running down a hallway in an area that's mostly devoid of life until you step inside a special trigger called an "encounter", which creates a set of enemies randomly selected from a palette based on your level, your area, etc. You and your party mop up all 4-8 of these encounter enemies and go on your way until you trigger the next encounter and take out the next 4-8 scaled enemies. So battles are pretty much stop and go. Even in the areas where there are supposed to be massive battles going on, it's really just you walking over more encounter triggers than normal. 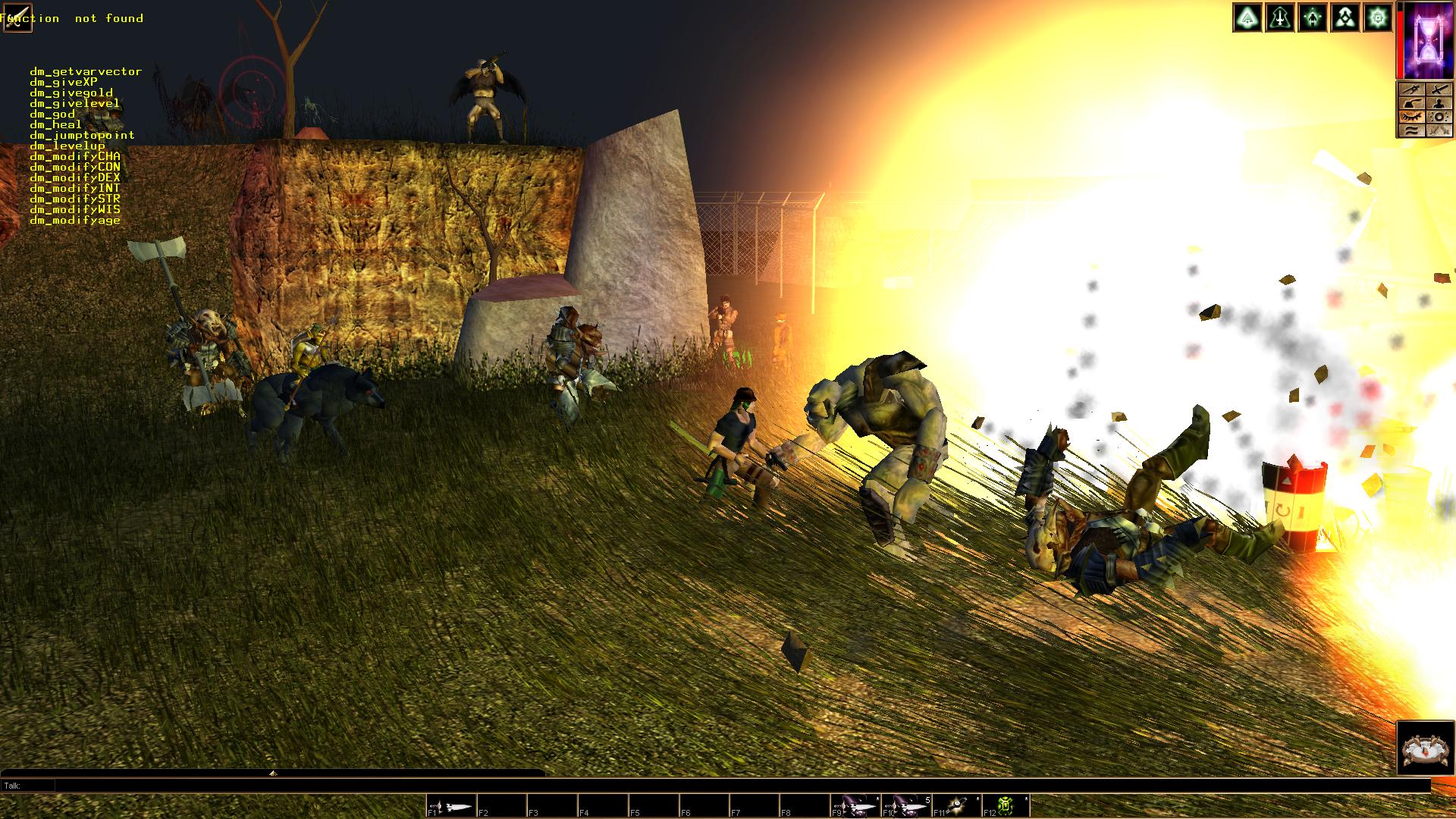 July Anarchy Prologue was designed from the start to be an all-out assault on the senses.

The point of July Anarchy Prologue's gameplay was to put a heavy-metal spin on the Neverwinter Nights formula. It would feature a battle that absolutely would not stop, with the screen constantly filled with enemies and allies duking it out all around you. The problem is, we were trying to build this in an engine that only recognizes single-core processors and can barely handle more than two-dozen characters onscreen. Originally we tried to get around this with huge triggers called "battle zones", that worked kind of similar to encounter triggers, with a few big exceptions. We weren't spawning 4 or 8 creatures, but closer to 30, on specifically-designated waypoints with each waypoint spawning its own creature of a different faction and strength index. So as soon as you enter this battle zone, all of a sudden you see a huge mob of monsters and soldiers start fighting each other, and every time one got killed, another would respawn after a short delay somewhere within or on the edge of that battle zone. And if the player leaves this battle zone, all spawned creatures are erased, clearing the table for the player's next visit.

Now, this was fun in small doses, but there were more than a few flaws with this system. For one, spawning so many creatures at once in the NWN engine causes massive frameskips no matter what CPU you have, so it became very obvious to the player exactly where these battle zones were. Second, leaving the zone erases all creatures which meant that anything chasing the player would vanish before their eyes, which kind of saps out the challenge, not to mention looks plain weird. Then we had a huge issue with enemies resorting to "spawn camping", where if one side gained a huge advantage over the other, they'd just dogpile on where new units spawn in and beat the hell out of them before they could taste fresh air. But the worst thing of all was that this system was predictable. The same number of enemies and the same number of allies would spawn in the same place every time you walked in range, and I hated that. I wanted a game that felt truly organic, something that would ebb and flow as you played through it, something that would surprise me even as I'm the one making it. And I think we finally got there. 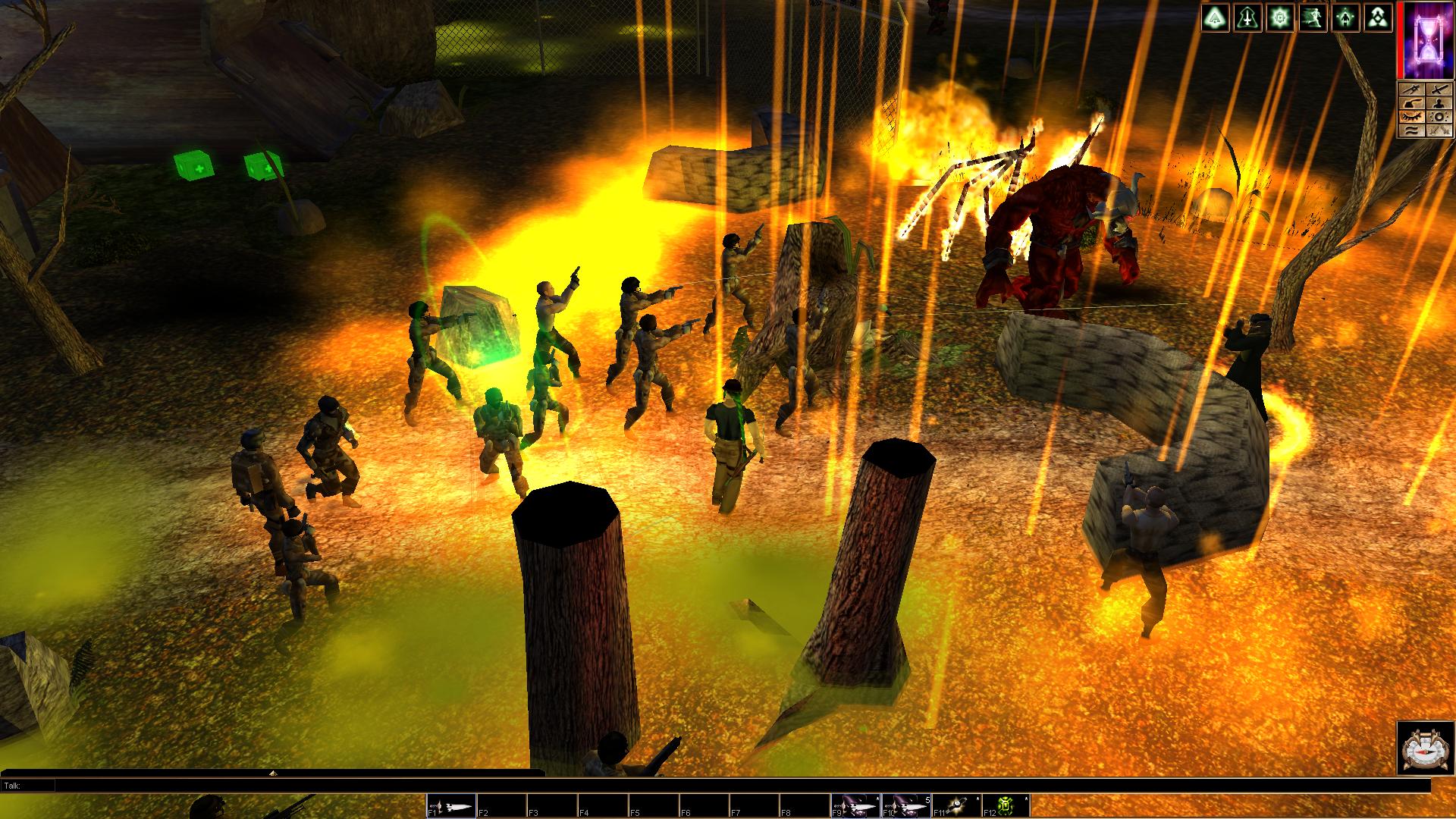 Our new procedural-generation system allows for more units onscreen than NWN was meant to handle without dragging the engine down.

Introducing July Anarchy Prologue 1.3 REMIX edition. We're calling this the Remix because almost every single aspect of the mod has been changed or even entirely rebuilt, with a whole new spawn system and gameplay features that NWN has never seen before. Not only does 1.3 play so much better than any previous version of the mod, it plays so differently from standard NWN that it feels like you're playing a completely different game, thanks to some revolutionary new code that stretches the Aurora Engine to its limits. 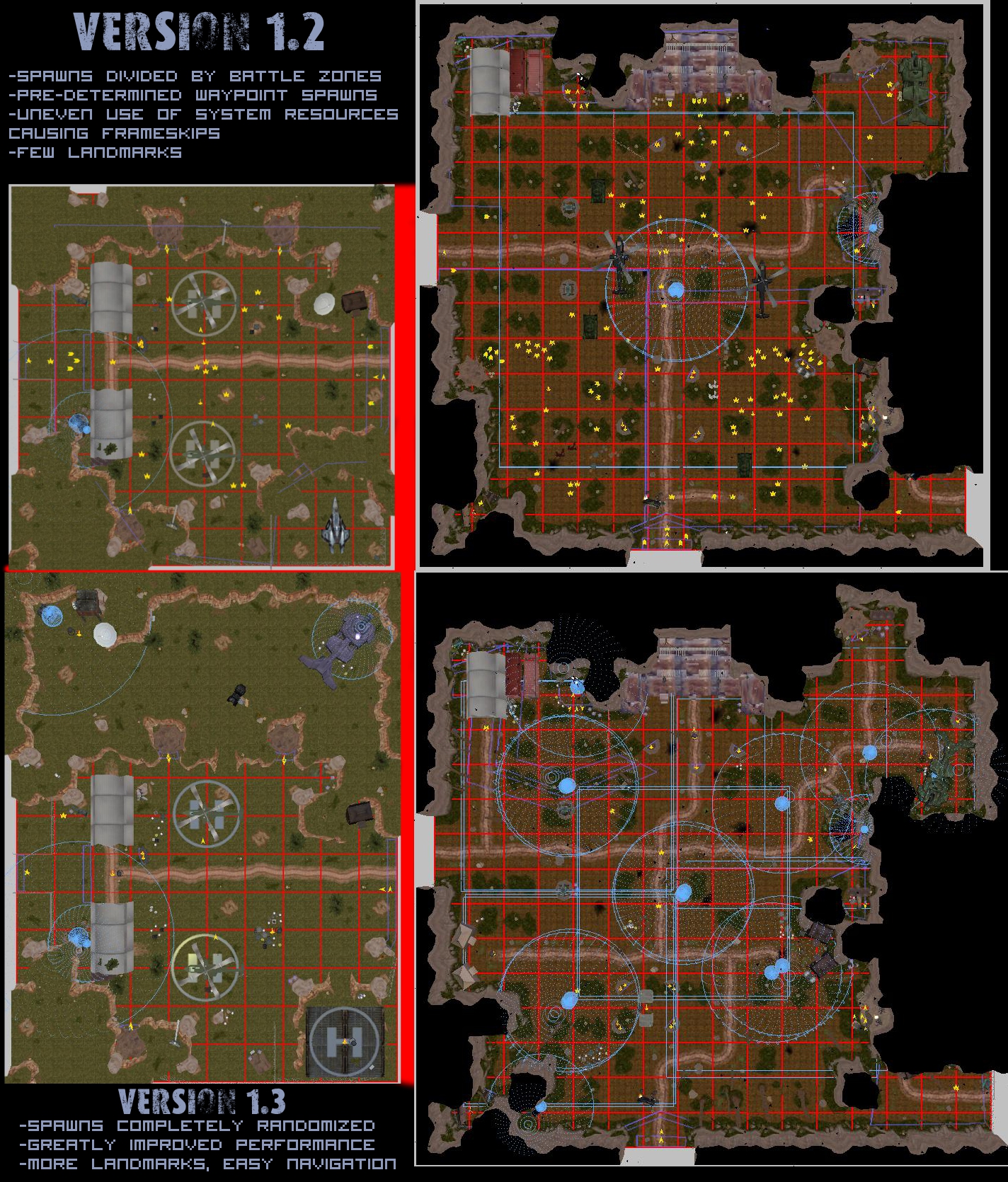 The combat maps in 1.3 are larger, more detailed, and more optimized, giving you much more to do in them while running smoother than ever before.

First up, the spawning. As you can see, we completely eliminated the need for battle zones, spawn points, respawn points, the works. What we have instead, is a system that procedurally generates combat units wherever the player is on the map. If you tried the demo for the now-missing Celeritas Eos mod, you have some idea of what to expect, as the code for that game's procedural generation was a prototype for this. As you run around the battlefield, the new game script is finding valid places to spawn a new creature about 90 times per minute while simultaneously erasing units too far from the PC to matter anymore. So if you run from one end of the map to the other, you'll still find a screen full of characters fighting each other. This means that we're no longer just giving the impression that a huge battle is taking place, we're actually making one happen.

The biggest challenge that this new system brought was game balance. With the old "battle zone" system, it was simple to determine the challenge the player would face because we were creating creatures with specific strengths in very specific places. Now we have no idea what is going to spawn where. To combat this, we assigned each area a "budget" on the kind of creatures spawned inside it. The higher a creature's level, the more expensive it is for the area to spawn, and once the area's budget has been reached, no creatures that exceed it will be allowed in the area. For example, it "costs" an area the same amount to spawn one White Raptor Dragon or five Gnoll Warmongers, so you can encounter a handful of viscous dragons or an army of snarling gnolls, but not both at the same time.

"We really want to drive home the impression of a modern-fantasy universe with a grungy, late-90's MTV aesthetic."


You still have a choice of whether you want to participate in the battle or just accomplish your own objectives, but the previous versions really didn't offer much of a reward for helping out aside from XP points. In the REMIX edition, the player has an actual impact on the battle surrounding them, thanks to the introduction of territorial warfare. Scattered throughout the army base are special nodes called Command Zones that enemies and allies will fight over. These Command Zones function similarly to Control Points in a Battlefield game: the faction with the most units near it will gradually flip it over to their side. The twist is that these Command Zones also represent control over the entire base. The faction with the most Command Zones in their possession has the most units on the battlefield. If you go about capturing Command Zones from the enemy, you'll see more and more human allies fighting by your side. It's even possible to recapture the entire army base and eliminate the Mythans completely, for the first time in this mod! That's easier said than done though. Capturing a Command Zone on your own is almost impossible, so you'll want to team up with and protect your human allies if you want to have the manpower to capture territory. 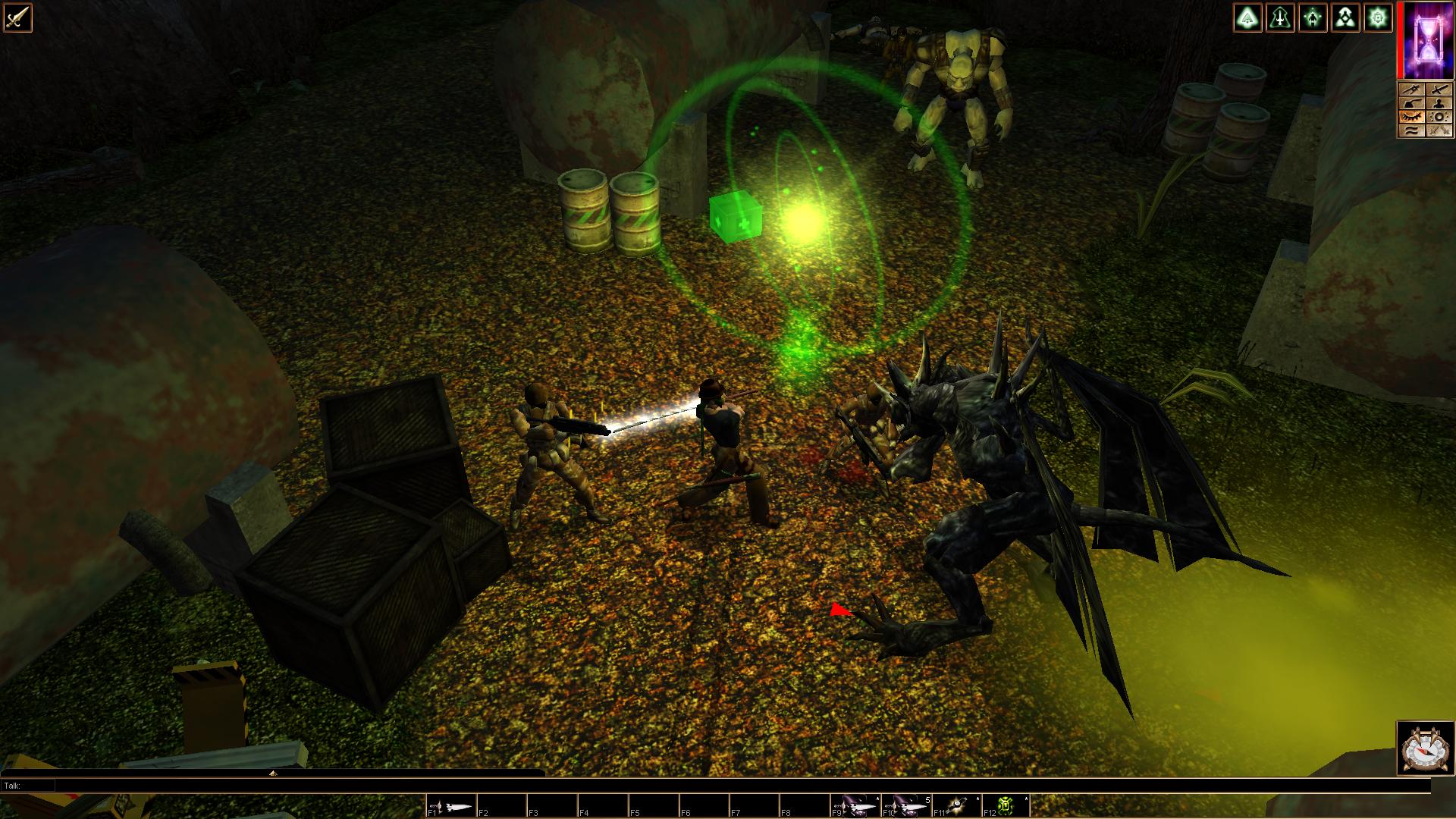 Capturing and defending Command Zones is challenging, brutal, and a whole lot of fun!

Of course, territorial warfare isn't much fun without a good chunk of territory to fight over. Maps have been greatly expanded, some almost doubled in size, so there's a good number of command zones to capture before you make a dent in the enemy forces. And of course, you still have a two-hour time limit that decreases every time you get killed, which is even more of a pressing issue now that you have more to accomplish before the final battle. Rest assured, this is still a challenging game, and you're not likely to succeed on your first playthrough. However, version 1.3 eliminates as much of the unfair challenge as we could find. The Adrenaline system is still a key balancing component, but now we've removed the 100 AP cap on Adrenaline Rushes, which means you can build up above the maximum Adrenaline level, making Adrenaline Rushes last longer. There are also now regenerating supply boxes that can restore your health, ammo, and grenades just by walking into them. We even created an interactive training course that guides you through the new gameplay mechanics before throwing you into the heat of things, so nobody runs into this mod unprepared. 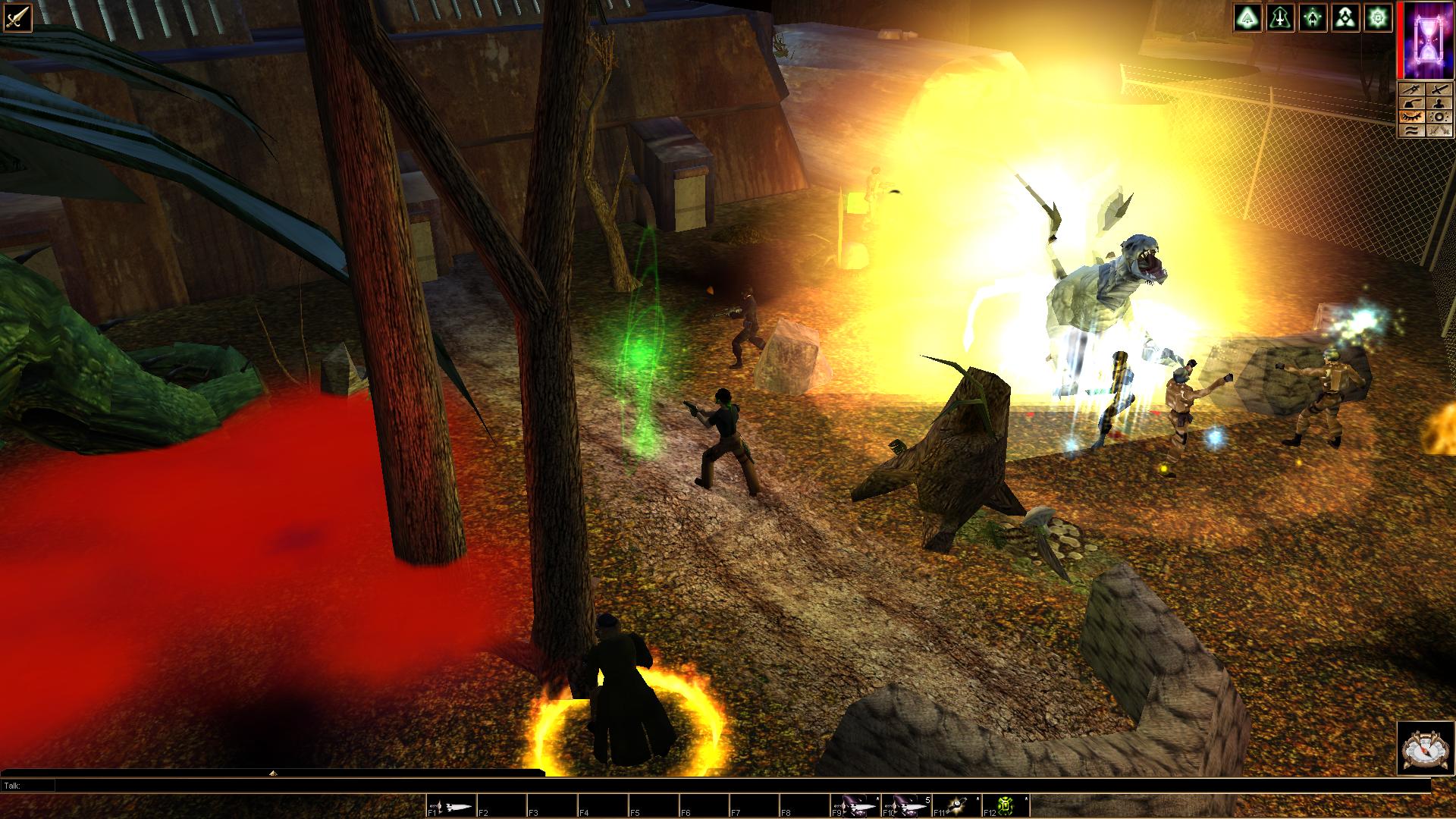 Taking over this Command Zone in Sector A is among the toughest moments in the game. Capturing previous zones and recruiting special units definitely helps.

A lot of the fiction and graphics have been overhauled as well. We really want to drive home the impression of a modern-fantasy universe with a grungy, late-90's MTV aesthetic. Music plays a big part of this setting, from the chugging guitar riff every time you level up to the screaming metal tracks that play when you hit an Adrenaline Rush. There's a more visceral feeling to the element of destruction, such as how fuel barrels now ignite the ground in flames when destroyed. The soundtrack has been revamped so that there's more variety (and also because I lost half of the original tracks while re-installing NWN one day) and Alex Meda himself has a new, darker portrait. Additional dialogue has been added, like how allies now occasionally give you props for kills. The backstory is also being reworked to reflect changes in the parallel novel: The game now takes place in the nearer future of 2085 and Alex now fights under the name "OutRapture" as opposed to "The Valor Legion".

The good news is a lot of this is already done. The new spawn system, Command Zones and AI tweaks all work perfectly and the game can be played from start to finish, including the new training area. The remaining work is going towards adding new weapons, new enemies, balancing out how the game gives out ammo and supplies, and rewriting all of the horrible dialogue from the previous versions. I'm also hoping to add more voice work, especially for Alex Meda, but that may have to wait for a later version. 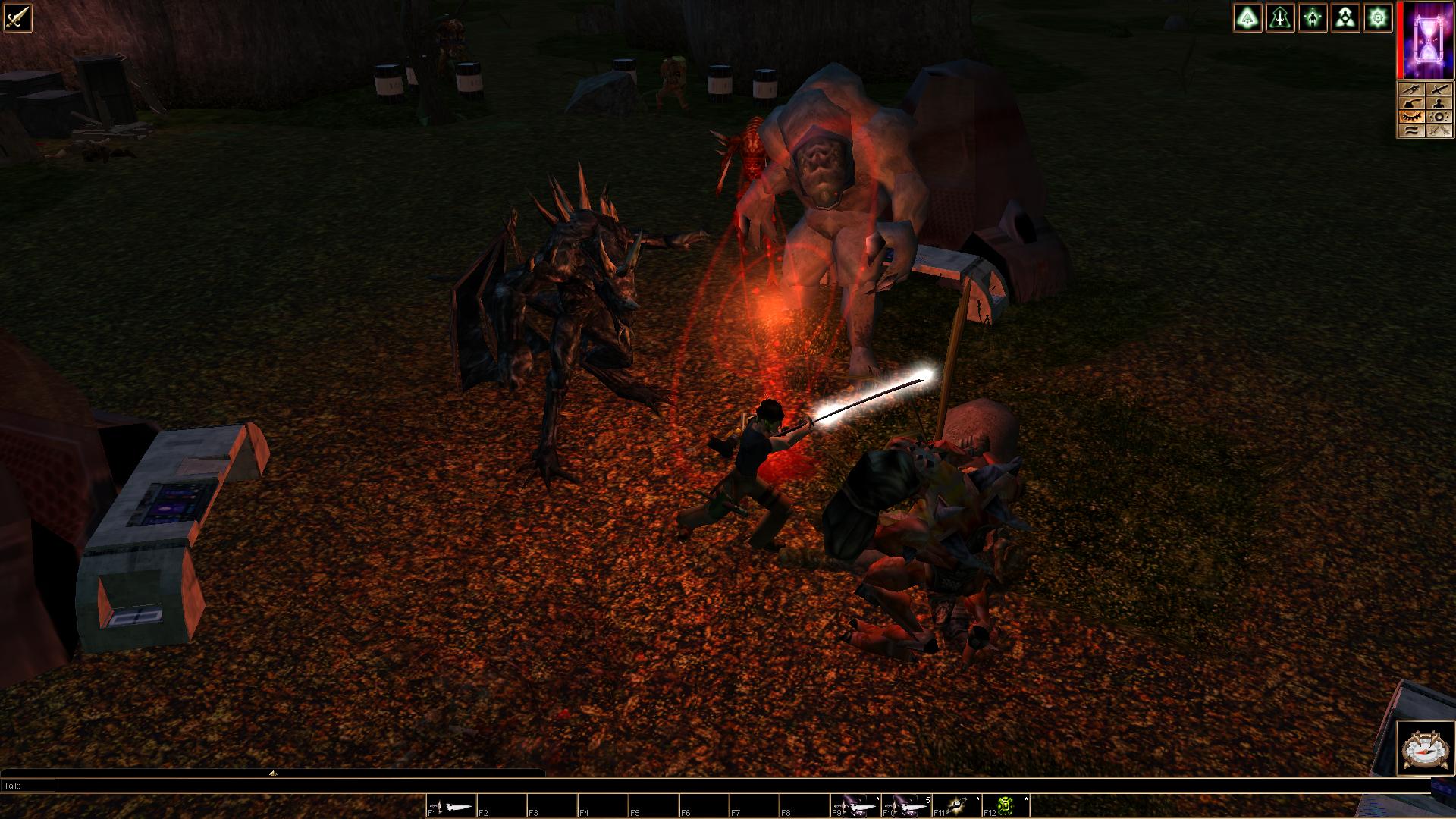 Screenshots don't do justice to just how insane the battles in this mod can get.

A lot of this is going towards building the framework of a possible follow-up, which I've been talking about for years but finally have a solid foundation to build one on. If we can finally get July Anarchy Prologue up to the level we originally envisioned, and if we manage to get some people playing NWN again, then there's a more ambitious, story-oriented July Anarchy game on the horizon.

What a nice surprise, I always liked this module.