The release of the First Order and Resistance factions draws ever closer. We are here today to share with you some of our progress.

It's been a busy few months for the Expanding Fronts team. About 75% of all visual assets for the new First Order and Resistance civilizations are complete. Unfortunately, we were not quite able to meet our launch goal for January, but we are not far off. While we still have not established an exact date, we can say with confidence that the new version of Expanding Fronts should be available sometime in February; early March at the absolute latest. We're sorry for the delay and we hope to get this new content into your hands as soon as possible. In the meantime, we are finally ready to reveal more information about the new civilizations and their traits!

Important Note: The mechanics of these new factions are still a work in progress, so this overview may not be entirely accurate to what is released. 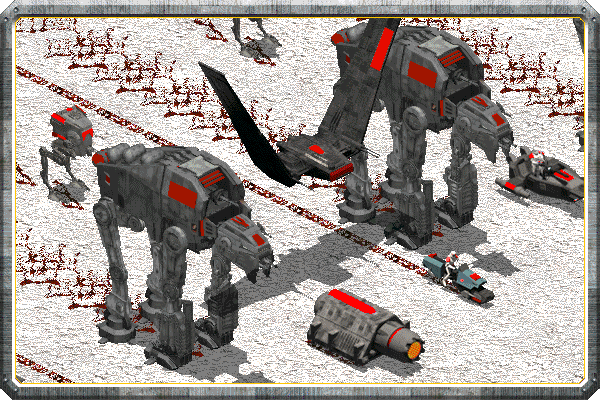 The New Republic’s rise reduced the once-mighty Empire to a rump state hemmed in by strict disarmament treaties and punishing reparations. But in the galaxy’s Unknown Regions, former Imperial officers, nobles, and technologists plotted a return to power. This movement evolved into the First Order, ruled by Supreme Leader Snoke, and is now ready to reclaim the Imperial legacy.

The First Order is a technological powerhouse, relying on advanced weapons backing scores of stormtroopers. A powerful booming-focused faction, the First Order excels at gathering resources and quickly advancing through the Tech Levels, where they gain access to devastating siege weapons and bonuses. If left to their own devices, the First Order can shred through base structures and defenses with ease.

They are less skilled at fighting protracted wars against enemy armies. Their early-mid game advantages fade quickly, and their mechs, ships, and aircraft will become outpaced by enemy forces, though their infantry units remain powerful contenders on the battlefield. 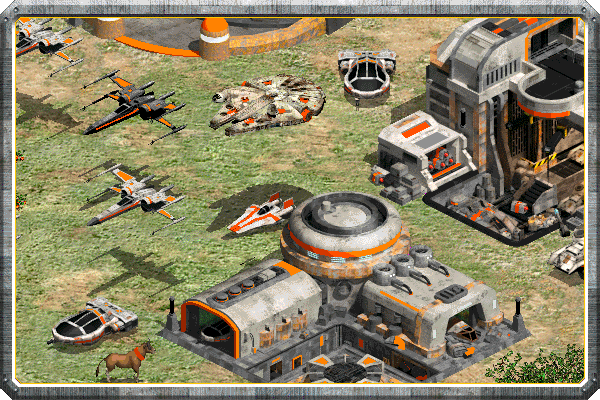 A small, secretive private military force, the Resistance was founded by Rebellion hero Leia Organa to monitor the actions of the First Order. Most New Republic power brokers tolerate the Resistance while regarding Organa and her fighters as dead-enders with an unfortunate fixation on the past. Organa’s cash-strapped movement relies on credits, ships, and equipment quietly funneled to it from the few senators who share her concerns.

The Resistance is intended to be a very resilient faction centered around stealth, mobility, and air superiority. While they are generally mediocre at frontline fighting, the Resistance is very good at bouncing back from near-certain defeat, as well as repositioning forces and resources at a moment’s notice to conduct devastating hit-and-fade attacks.

Ski Speeder - (Fortress) Low-altitude speeders that pre-date even the Rebellion. Ski Speeders are nimble, low-cost vehicles that can chase down enemies before attacking with light rapid-fire blasters. Effective mainly against siege weapons, but capable of engaging other threats when massed.

The Expanding Fronts team once again wishes to express our sincere thanks to those who have followed our progress over the years, and for their continued patience as we put the finishing touches on our new civilizations. We wish everybody a Happy New Year.

Our plans for expanding fronts don't stop with what we've done so far. We have new campaigns, new units, and entirely new civilizations on our to-do list, but we need additional help to make them possible. We are currently looking for:

Concept Artists - We are looking for skilled concept artists to help us visualize and design structures, characters, and vehicles for our planned new civilizations. The more art we have, the better our modelers can put new in-game art assets together. Battlegrounds, like Age of Empires before it, uses a very distinct set of visual qualities for its architecture. Just by looking at a building, you can immediately tell what type of structure it is, what civilization it belongs to, and how far down the Tech tree they've advanced. We need artists that can meet those criteria with new and interesting designs for the new content we have planned. In addition to this, we will also need designs for new infantry, droids, tanks, spacecraft, boats, and artillery where pre-existing canon designs aren't available.

3D Artists and Animators - Modelers are responsible for bringing our new planned new units to life. The requirements to help us out aren't very demanding, amateurs are certainly welcome to lend a hand. Because SWGB is a sprite-based game, the amount of detail we need on infantry models and animations is not particularly high, as can be seen in official renders of the original art. Most units have five main animation sequences: Standing, Walking, Attacking, Dying, and Decaying. Special units like Jedi and Workers have additional sequences such as using force powers or gathering resources. Generally, all of these animations are rather simple, typically ranging from 8-16 frames each.

Technical knowledge of SWGB or AoK modding is certainly welcomed, but not necessary; we can handle most of that on our end. All that's required is a program capable of orthographic/parallel projection, and the ability to render the needed animations as a series of 2D images (using the correct camera/lighting setup for Battlegrounds) that we can convert into in-game sprites.

AI Scripters - Scripters teach the game's AI how to play the game. We need scripters capable of writing new strategies for the computer players that take advantage of the many new units, buildings, technologies, and gameplay elements available to players in Expanding Fronts. Scripters will also help to write scripts for new campaign levels. Anybody interested in learning AI scripting can take a look at the Computer Player Strategy Builder Guide for more details about the AI process.

Writers and Scenario Designers - We are looking for users skilled in the use of the Scenario Editor, as well as talented creative writers to help us craft our planned new campaigns. Our designers should have a good eye for map design and trigger use.

If you or anybody you know has the skills and would like to contribute to the Expanding Fronts project, please let us know. You can get in touch with us here, or on our Discord server.

This is amazing! I was waiting for this update for a long time!

Wow, "Rise of the Skywalker" is barely out the theaters, yet you have already made the Jet Trooper into an unit. You sure are not wasting any time! :D

Amazing work! I may not be the biggest fan of canon or the sequel trilogy, but I'm definitely hyped to try out the First Order!

Yes, the First Order faction seems like it will be great.

Good get these two civs out of the way That way they can add madalorians, chiss, hutt cartel. then the old republic and sith empire

hahahah i was thinking the same thing

Interesting. By the way, will FO have Final Order's tech like Sith Troopers or TIE Daggers?
Also what unit will play role of First Order Air Cruiser? I think First Order Gunship seen in Kylo Ren comics could be great for that role. It is really strange flying thing with a big gun.

Sith Troopers its not First Order, its other Imperial faction.

Maybe we will see Palpatine's faction as well

As much as I like this mod, I'm kinda disappointed in those factions so far. I don't care about sequels and after how terrible TFA was I didn't even bother watching the rest of new movies. And Zann Consortium always felt like a bad fanfic idea, why not to make simply Hutts instead.

Still, Geonosians are amazing, and I hope for Trandoshans and Mandos to be next.

I dont mind.. Im glad they r getting these ones out of the way, then they can add the real cool stuff... them adding the zann consortium before they adding these two civs to me is encouraging because it shows they r willing to add old canon things as well

I love everything. I only see 1 thing. How can you win against the resistance if the other player jerks around with a cloacked transport?

Not to mention that Resistance will likely have bad ground unit capabilities, so a few strong defenses should do the trick.

Thank you for being honest about the ETA. I hope you guys speedily move towards your goal of February release!

This looks amazing! Is this all compatible with the battlegrounds all in one patch that a lot of people use to play online?

I do not think it is compatible with anyother patch, since Expanding Fronts has it's own balance.

Thanks for all your work!

Looking awesome in all fronts, thank you so much for all the work you're putting on this project! Can't wait to play it, but will gladly wait longer for that EF quality! :D

Asking again if you may update galactic empire civ. and fortress bonuses becouse they are not as good and do not effect game as much as other civs. Keep on the good work =)

wait... what?
Are you serious?
This is amazing! I love your work!

Would love to help if i could.
But i guess my skills in this regard are to worse... :D

Take all the time you guys need. Even if it's gotten painful, the wait will be more than worth it.

This looks awesome. Thank you for all of your efforts, Expanding Fronts is absolutely amazing!

I'm wondering how you take these screenshots. They look so much better than the muddy jpegs you usually see from this game.