Thanks to all you guys voting for us we have made it into the Top 100 Unreleased Mods 2009 over at ModDB. We didn't expect to make it this far (we never have before!) and we'd love to see how far we can go, so please vote again for us. You can vote for as many mods as you like too, so you don't just have to vote for us, have a browse around the other candidates.

Development has been pretty slow over Christmas as you'd expect but the pace is picking up again now so expect a larger update next month. What we do have this month though is some images of the "nearly final" MG34 texture. I say "nearly final" as we've got a few problems to solve with it in terms of ingame performance. The holes in the barrel shroud are supposed to be see through (as in the render) but ingame this looks a bit dodgy and creates some visual oddities when you see through them, into something else transparent. The problem arises as we can't decide which is less of a performance hit, a alpha texture requiring extra work on the renderer or to have the holes modelled and add the extra work there. Either way it's 99% done and looks like this: 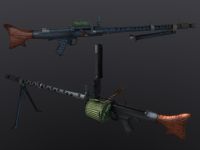 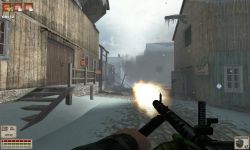 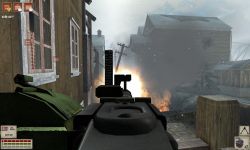 We've also been given the near complete "theme" for Ham and Jam, produced by Brian Gair. This is the music you will hear in the menu screens and for general media releases from now on.

Last but not least another video by one of our testers "Porc-Epic", this time showing off some gameplay from HaJ Pegasus.

[Last minute update] We are also in need of some additional sound monkeys to help fill up our collection of noises. Mainly environment FX as well as impact FX and general rustling and jostling. Applications to jobs@hamandjam.org please!

But, aren't you already using an alpha texture for the transparency? We ran into that problem with transparency for some of our models for a school mod project, it's a bitch =/. Though, maybe an "in-between" solution could be just building the high-poly version of the barrel with holes then baking that on a low-poly barrel (as a normal map) that's just a cylinder? You wouldn't see through it, but it'd make some nice holes and you wouldn't need to recompile the model.

We can't listen to the audio file. :(

The one at Moddb.com works

Wow the footage is looking great :)

Is Phillip the voice actor for the British?