Official Release update for Insurgent Strike v0.11.Yes it's finally out!

Hello patient Insurgent strike fans. It has been quite a while since the last update, but over that time of silence, the development team here at insurgent strike has been effortlessly working on getting insurgent strike ready for it's v0.11 release. the main reason for the release taking so long were some complicated issues with getting single player to run stable, but some compromises were made so that insurgent strike could move on and get to this stage. For any of you insurgent strike fans that have played our ancient 0.1 beta FROM LONG AGO, the .11 release will be far different. Expect realistic game play that will better immerse you into the virtual combat situations you experience on the battlefield 2 engine. WE'VE BEEN HARD AT WORK GETTING NEW MAPS READY, ADDING NEW WEAPONS, AND NEW FACTIONS, AS WELL AS TWEAKING CURRENT VEHICLES, AND WEAPONS. WE ARE SURE INSURGENT STRIKE v0.11 WILL NOT DISAPPOINT, AND WE ASSURE YOU THE WAIT HAS BEEN WORTH IT.So without further ado, we present you, insurgent strike v0.11 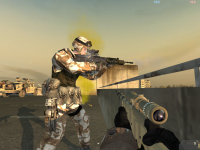 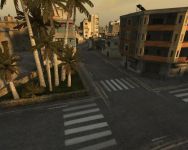 We'd also like to give you a little bit of info on what to look forward to in the v0.12 update of insurgent strike. This update will mainly include various bug fixes, and updates, but will also have some other goodies. Like the FV107 scimitar that the U.K. faction will get their hands on, and the Militia and Insurgents will be getting a new AK-74.Also look for the USMC faction to appear in .12

Good work guys. If you want it to be more realistic than PR, It has to be REALLY realistic. Good Luck!

I don't think you can go more realistic than PR...

Every single person comparing it to PR,is now giving me a bit of a headache,lol..We're aiming for something a tad bit different than PR..Maybe something a little more relaxed/fun,but still realistic.

we'll see,
hopefully it will be
either way I'm gonna give it a try when a closer to final version is complete

STOP USING REQUIEM FOR A DREAM, GODDAMNIT. THAT SONG HAS BEEN DONE TO DEATH. IT'S NOT EVEN A GOOD SONG!

looks good, but with PR as a competitor you will probably be better off joining theire dev crew XP

youre soooo right on the song part.. oh lord how youre right...

stop comparing this mod with stupid and **** pr !

Well, first off, PR is most certainly not a "stupid and ****" modification. It's a fairly prominent modification, has won several awards on this site alone, and has a massive userbase, compared to other BF2 mods. The reason most people are comparing this to PR is that both mods have very similar components. Just looking at the mod description;

...mainly centered around current day combat in the Middle-East against Insurgent groups : PR's done that (Insurgency Mode)
...combat against militia groups,such as in Western Russia : PR's done that (Chechen Rebels)
...factions,kits,vehicles,maps,and everything in-game has been adjusted to be as realistic : PR has done this as well (and added several new factions to boot.)

Even the items that are upcoming (Scimitar, USMC) have been done and implemented with a high degree of polish in Project Reality. I think you need to clarify why this isn't just a new PR, what sets it aside from the already established modification. What kind of unique features is this bringing to the playing field? I think there is room for another kind of mod like this, it just needs to forge new ground instead of retreading the footsteps of an already successful mod.

I'd like to see where this mod goes, but you really do need to set yourself apart from PR in order to succeed. Look at your mod description, and compare it to that of PR, and see what you think for yourself.

My suggestion would be to talk with the PR dev team and see if you can't create a mini-mod with their oversight. Or join their team as someone else suggested.

i cannot play SP!! if i click on it, the game closes and goes to the site of the mod but the site is hacked? so what now?