Post news RSS Inside loook and status report, this time on Steel Talons

Inside look and status report, this time on Steel Talons. What have changed? what you will notice?

When EA first showed Steel Talons back then, I recall they said that they were all about Railruns and Garrisons 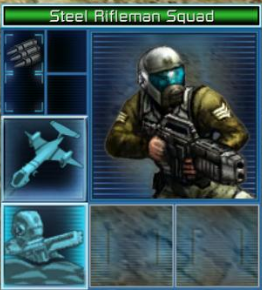 Steel Rifleman Squad's Dig in ability will spawn a Steel Foxhole which have 4 (or 3 still think about edit it) slots for garrison instead of the normal 2, I tried to change their Foxhole icon to ST from GDI but it cause a but in the destruction animation so I left it untouched for now (unless people don't mind seeing Foxhole without roof when it being destroy) 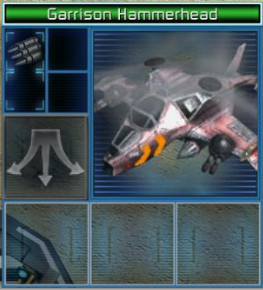 People want me to change it name to something like Troop's Hammerhead so I may do it, some also wanted me to add to it more health and armor but I personally think it more Zocom's specialty rather then ST, also with 3 squad inside it it may be over power if it won't fall fast~

MRT's Repair ability had been increased from 87 to 150, MRT can now also crush tier one infantry and have attack cursor to make aiming more easier,
Move and Drop Off button replaced with Evacuate button for quick evacuation,
MRT's repair drone now can also heal allies make it better for team work if your ally want his structure/tanks repair

Railgun Accelerators cooldown reduced 210s to 40s
Damage penalty reduced 75 to 60
Rate of fire increased by 100% so it hopefully will be more usable and notable in battle, I may play with the cooldown and rate of fire if they be OP but for now its a life's savior in pinches

Adaptive Armor no longer reduces rate of fire by 25% 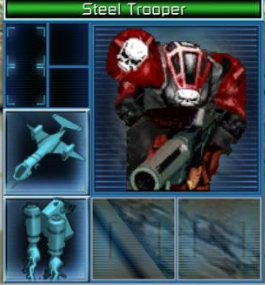 Steel Talon's Now have their own Zone troopers, Their name, Description, And picture, changed to Steel Troopers, their cost and build time is 1200$ and 12s
Steel Troopers have Machine Guns instead of Rail guns, they deal 45 Damage, have 6 clips, and take way less time to reload than normal Zone troopers,
They can attack Aircrafts and good mostly against Infantries and Light Vehicles But they can handle tier 2-3 Vehicles and Building once they are a lot in numbers
Steel Troopers have Bombardment jump-jets instead of normal jump-jets, letting them deal 1000 Damage to anything that they jump on or anything that in 50 radius of the land zone Include Structures
They don't hit allies, And their Bombardment jump-jets are a bit faster and can fly to a bit more distant than normal jump-jets

I'm aware that some hate that unit But I really think it good to keep it around, it sort of hope against enemy heavy inf when you out of Wolverines 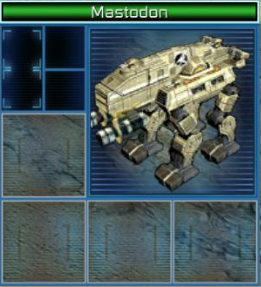 Steel Talon's MARV was replaced by the Mastodon, the Mastodon will have more speed, more health, and a bit more fire power then the MARV
It can also garrison 4 squads which is fit for Steel Talons because they all about railguns and garrison,
The Mastodon will Destroy whatever factory it came out from due to it's size Which is it's only downfall

Loving all the new additions you've put in for their faction.

You could call that ability "Bunker Up" instead of "Steel Dig In", it would sound a bit more military.

Garrison Hammerhead could also be named Assault Hammerhead, if you are looking for suggestions.

Bunker Up sound nice, but don't it going to make their name sound unrelated (Steel rifleman squad)? because their only difference is their ability :]

Assault Hammerhead Sound like a name that fit more for armed Hammerhead with a lot of guns and rpgs, in a sense the Garrison Hammerhead will end up like that if you add squads to it, but it not because it's own power but rather the Squad's fire power, that why I don't sure about that name.

if you have any suggestions for anything feel free to tell me though : p

I'm agreed with jfpoliveira12 with changing the name to Assault Hammerhead instead, or if you don't like that, here is a few suggestions, Hammerhead Troop Carrier or Hammerhead Troop Transport. Or maybe Armored Hammerhead. Well, that's the suggestions i can come up with for the time, but if you want some more names, i'll take some time, and can probably come up with a few more. You can always try to search for alternative names, if none of them fits.

with the foxhole, are you changing all of the textures involved? I'm not sure how it works in wraith edit, but in other Late Sage SDK's you get funky things if you only change one texture.

I think I at least changed all of them, the normal, damaged, and really damaged skins and I think I also done that to the animations since I don't recall any problem with the Building animation (the animation that shows how the foxhole appear from the ground)

And I tried to do the same to the ST marv facility, changed the icon to ST's icon and it only showed up this time in the "building appearing" animation and changed back right away to GDI once the building was completed xD

If you know how to make it work then feel free to help me, the credit will be yours ofc as I don't give much care about my own credit

I am also unsure about the KW tools, but if the ability to add models is as well off as in other Late Sage games, you might be able to change the model it's self.

I think the Foxhole was in one of the EA model packs, and the Marv Facility in one of those community packs.

I can attempt to set up some more stuff if you like.

Your help will always be welcome

If you want I can send you the xmls and the skins I made, I will warn you though that I mostly extract xmls with ver 1.08 of wrathed which shows most xmls lines from left to right rather then up-down, ver 1.07 extract the normal xml (up to down) but from my experience in some case it miss some import lines while ver 1.08 miss a lot of unimport lines that don't seem to effect the game, maybe I just send you both and you will understand what I'm talking about

Nice! Keep on going! I hope you release the beta soon.

I'm excited for the 'surprises' and I'm looking forward to the beta soon.

I love how this is turning out so far! really impressive work egozi44 ^_^

I'm not sure why but i think Garrison hammerhead is a good name that doesnt need name change due to it's main bonus by having more garrison slots for infantry makes more sence.

Also i think by giving it more health and armor and 3 garrison slots is a bad idea for balance, due to because if it has 3 garrison slots, it can do the 'hit & run' tactics with that many infantry inside and players can do it long enough for it to maximum rank up and that makes it too dangerous to deal with XD

I think by making it same as GDI hammerhead by hit points, speed and damage but keep name 'Garrison hammerhead' by give 2 slots instead of 3 would still make it just as fun to use by also making it only bit not as OP :)

I also love how you did with the Steel trooper :)

although Steel talons is all about rail guns & garrison's, they should not have strong infantry because thats for ZOCOM, and i think its good that only their zone trooper has Machine gun instead of railgun that can also fire at air crafts and can do jump jet blow ability :)

what i also think is its best to have got 2 garrison slots instead of 4.... only because it has both rail guns & 2 rocket pots at its back, while has more health & firepower than MARV, giving it 4 more weapons by infantry would make it like a Fortress of weapons everywhere and that makes it the most OP epic unit XD

ALso yeah if your interested, you might could contact Carnius the maker of tiberian essence, of able to use the 'Big air ship' that carrys the Mammoth mk 2 from sky to Teir 4 war factory since it's too big to come out from the structure :)

Hi Cabal/legion how you been?

I think that for now I will leave the hammerhead as it is because as you said more hp and armor will make it op, also the name tell the player exactly what he/she going to get

The steel troopers gun 3D model was left the same for now unfortunately
Since I don't know how to change it with 3D application, but it act like MG so they won't be stronger as the normal zone troopers

In the mastadon case I had to give it something for the price it take by destroying your building, it not that op and the cannons + the missiles damages making it similar or a bit bigger then the marv (they don't have ton of damage separately), and walking fortress is the thing that been on my mind when I thought about epic unit for a faction that is all about rail guns and garrisons ;)

Thanks for the support :)
Let me just mention that while I the one that make changes for the mod the credit should mostly go to the people who help me with testing, ideas, general help in forums, and permissions to use Their units, abilties etc (like in the mastadon case), anyone who helped me will be credit in a note that I will include with the mod~


I trying my best to make the best of kw, and looking for help rather then self credit

yeah we shall wait for now when Mod is ready to be played with and then can give feedbacks :)

That will be great
Thanks ;)