A mod in which you travel through a developer's mind, In Development plans to change how players view their games.

Today, we are publicly announcing the Source mod In Development. To celebrate, we have a couple of concept sketches to show you, as well as a developer video showing all the weapons that will be in the demo.

The plan for the demo is to make a short level around 5-10 minutes long with a few basic weapons, perhaps a new npc or two, and set it within the first stage, WW2. The demo will have no relation to the plot, it's only being made so that we can get some more solid feedback on the mod. We want to know what you did and didn't like about the concepts being presented. 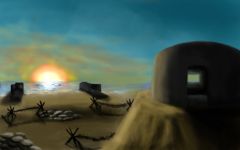 Also on the topic of the demo, a few of our members know how to map as well as do their assigned position, but we don't have anyone that's only for mapping. So, if you are interested in helping out, feel free to send me a message (with some pictures of a couple of maps you made, if you don't mind) and we'll work from there.

We also have a few other slots open, but aren't huge priorities. Spots like writers, concept artists, skinners, and organic modelers are all needed, but won't be required until later this year. Still, if any of these positions interests you, send me a message. Specifics of what we need and what we have filled will be in this mod page's forums.

For now, we can make do with what we have and still produce a demo for you all to test out.

Wow, this sounds like an awesome idea! I've never seen any mod, or game, that has this concept behind it.
I hope you stick with this.
Tracking.

Really Good Concept.
I am tracking now .
PS - Do you need any voice actor ?

It's too early to need any kind of voice acting just yet. Voicing acting would probably be needed near the end of development. Sorry.

I love new and orginal idea's

Hehe, sounds like a clever concept to take are design and gameplay anywhere you want. good luck with your mod!

This sounds awesome, been wondering what it was all about ever since I saw the first logo - and now it's all clear to me and it's pretty impressive.

Only complaint I have is that Pathard is dead-weight on your team!
jk.

Hey, he made that logo that happened to get you interested in the first place! ;)

I suppose there is immense truth in that. Then again I would have been interested anyways since he's an eFriend, lol.

Definitely tracking; possibly the only postmodern meta-game I know about--I've gotta see how it develops.

Sounds like it might be a bit like Darkest of Days, where you travel to different time periods, but in this mods case, traveling to different ideas inside a developers mind. Neat idea.