A followup to my last post and a new Digitanks screenshot.

Merely days after my exasperated exclamations of hopelessness, ModDB (IndieDB?) featured me in their video spotlight. My huge thanks to their team for their support. Also a huge thanks to everybody who sent their kind words. I don’t get discouraged so easily

Also thank you to the slew of new playtesters who sent in their feedback recently, lots of new ideas are helping me improve the game every day.

I thought I’d share some of my work for the last couple days, here’s a screenshot. 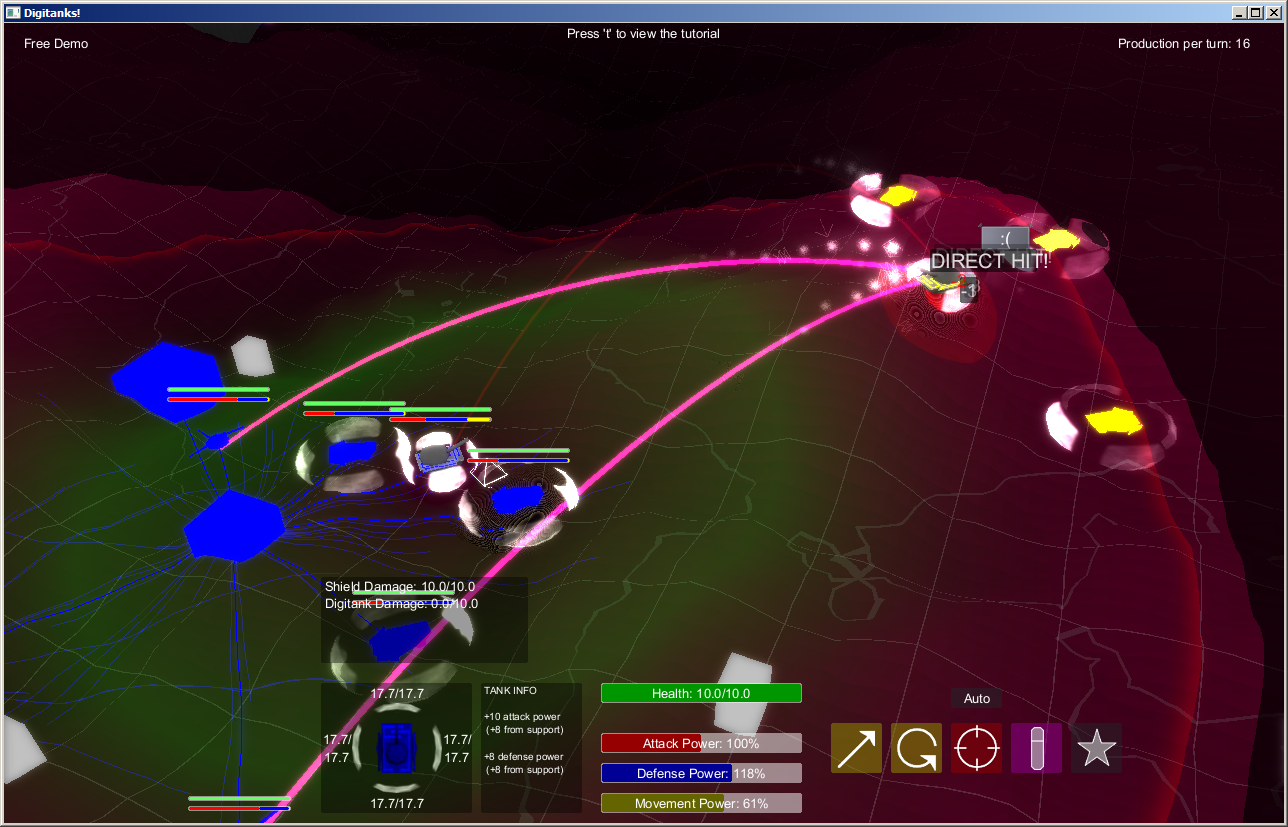 Here you can see that I’ve implemented (at great expense to my sanity and with tremendous cursing of OpenGL) a “fog of war” where the areas far from the tanks are not visible. In this screenshot, a group of enemy tanks have just emerged from the fog of war to attack the player’s base. Much to the dismay of the enemy team, their main battle tank is being pelted by my own tank and artillery. On the left you can see my base, with a Buffer supplying the troops (explained in a previous post) and a resource collector. These are still just large blue squarular blocks, which are stand-ins for the art that’s going to be developed in the coming weeks. So far the list of structures that can be built at the base is as follows:

Interestingly, ever since the scope of the game expanded, the interface has suffered. In the first demo, there was no need to have to click on tanks to select them, because a max of five tanks (all the same) meant that scrolling through them with space bar would be sufficient. Also, the “auto-progress” feature that automatically proceeded you through the movement options was a useful thing to have. But now, with dozens of tanks possible, neither of those really make sense, so I’m having to go through and change the way players interface with the tanks.

Previously I decided on a left-click-command and right-click-camera methodology, but that’s starting to get weak. After a lot of debating with myself, I’m getting rid of the auto-progress and reversing those mouse buttons, so left click is camera and unit selection, and right click issues commands. This matches more the StarCraft way of doing things, and we all know how successful they are. I hope that this makes the game a bit easier to get into since the kind of person that enjoys StarCraft I think would also enjoy Digitanks. (After all, I enjoy StarCraft.) One other thing that the game is major league lacking is better camera control, and that’s on my short-term immediate list of things to do.

Wow, I didn't know you were going to broaden into an entire... I almost said RTS, but obviously that's not right. Well, the style that includes structures and unit creation. Guess I missed something!

Looking great though, concepts are sound. Looking forward to the next playtest.

Haha... I made the mistake of calling it an RTS when I first was developing the concept. It has the same signature of an RTS, except it's turn-based, perhaps it'd be a TBS! With a healthy dash 4X and artillery games mixed in.