Digitanks is a turn-based artillery game. Set up your base, build a fleet of tanks, and attack your enemies without mercy.

So Much News, So Little Time

So much news! It's been a while since I've posted news on IndieDB but today that changes because the Campaign Update has been released. Depending on how you purchased Digitanks you may need to update through Desura or through BMT Micro, but no matter who you are and what your name is you can try the demo on Desura or on the Digitanks website. Moreover, this update comes with a Linux version, a first for Digitanks. Update: The Linux version of Desura is currently in beta, and the Linux version of Digitanks released with it will be a launch title for Linux Desura. As a result it may not be immediately available through Desura, but it is currently available on the Digitanks website.

Also don't forget that I've extended the Digitanks Pay What You Want sale, which is a great way to support developers. You can pay any price you want, from $1 on up. A $1 minimum is imposed by our payment processor unfortunately.

And lastly, in celebration of the Linux release, Digitanks is now open-source! If you can do "The C++" then hop on over to GitHub where the Digitanks source code happily lives. 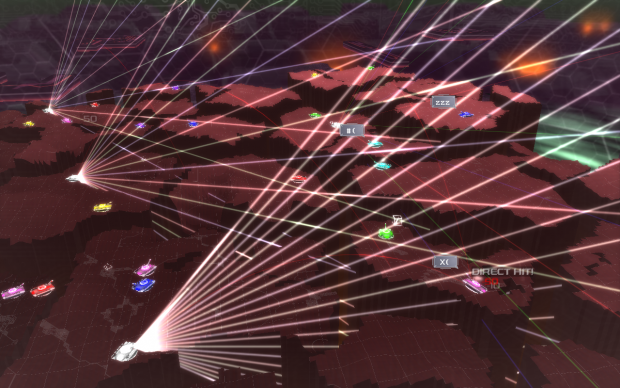 Would you rather buy games or socks?

Introducing the 5 For $5 Indie Bundle. Buy games, not socks.

Or, How I Learned To Stop Worrying And Extort The Escapist

It's not our fault for taking so long, we were taken prisoner by radioactive monkeys.

The Artillery Update demo is now live! Artillery-based strategy gaming has never been so great. I know - I invented it.

Just tried the demo. Crazy scary intro. :D
The game seems fun. Everything worked well until I clicked on "credits". Then it just exited.
P.S.: Why can I not see the game in the games list?!: Img7.imagebanana.com

I like the DigiTank soundtrack. Would care to upload a OST of DigiTanks OST. Its so cool and sound futuristic + also suit the game as well

I'm glad you like it! Honestly the entire soundtrack is included in the game - just download the game and you'll find them as .ogg files, in the sound directory I think.

Such a simple graphic ( Like Tron more or less ) and with the Element of RTS-RPG. Its a great game. I advertising to other people in other forums.

Also use some software to convert the music and become Mp3 :), can play on phone

I noticed you were bugging Notch with Digitanks. Looks like Operation Cookie Caper failed and you desperately need to advertise, so you started Operation Creeper :P

And Notch was pretty cool about it too.

Why are the ratings for this game closed? D:

It's fixed now, it was a bug that affected the whole site apparently.

I downloaded it but i cant play the game, It says that it doesnt support my Video card or my Video card is not supported. First time seeing this error

My video card doesnt support the features of Digitanks. thats what it says

Sorry about that. We're working to fix that in the next version, which should support every video card on the market today.