Post news RSS ... I could be your cheeky girl!

We implemented the simple triggers and they turned out to be a success, and I get to make a bet ... 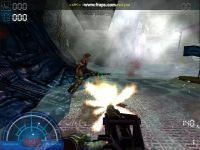 New damage types to help implement a rock-paper-scissors kind of ballance, simple triggers to fix stuck domination points and CTF flags and team volumes. These are some of the MUST DO from our TODO list that got implemented from our last news entry.

The simple triggers themselves proved to be a major step forward, since they managed to fix a serious show stopper in our mod: occasionally, CTF flags and (a bit more often) domination points would get stuck. Nobody would be able to capture them. The triggers we used to implement the specialized objectives were not meant to be used for MP, and they showed limitations. Our sollution was to develop a more simplified version of the trigger object. As soon as we got rid of the unwanted functionality and streamlined them, we also got rid of the stuck objectives.


Another change in the mod was to nerf down the smartgunner. But instead of just decreasing the hitpoints for the synthetic class that was filling this role, we went the extra distance and brought in a new character model. Enters Sgt. Hall: 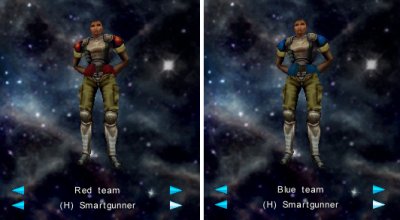 This feels the right way to go: instead of justifying the lack of hitpoints for the second synthetic by it being a different model, we opted to simply have a human character instead.Now, related to the title ... it's a challenge. Basically if I don't manage to improve the netcode of the game, I will use the "I'm your cheeky girl!" nickname starting with 13th of June.
Not yet your cheeky girl,
Herr_Alien

Well, it became a pain for the Domination game mode, because triggers are used a lot in it. In the other modes (CTF, 1FCTF), the players interract with triggers only when taking the flag or making the capture. That's not that often, so the issue didn't became known until we added Domination.

looks fun, you may wanna add more variation to the announcer voice though, it got pretty annoying to listen to .

Well, we planned to have it mode like the Father computer on Auriga; because of this, text to speech programs work OK for it.

The alternative would be to actually get somebody record the announcements :O :)