(Thanks to the Overgrowth team and Iiro Jäppinen for providing the icons)
Join our newsletter! 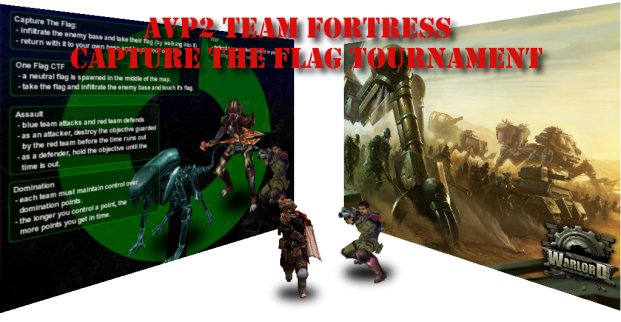 The title says it all:

A few words on the tournament itself:More details (as having groups of 3 - 4 teams, which maps will be played and so on) will be revealed at a later date, after we have a good estimate of how many teams signed up.

The prizes, or 'About IG Warlord'

The demo is available here: Igwarlord.isotx.com
A few words from their home page:
The players from the top two teams will each get a serial number, unlocking the demo into the full game.So, go ahead, get the mod and start playing!

1.1.2 brings several fixes on two of our maps, integration with the new master server (1.5) and a new loading scree.

The update consists in a corrected mod launcher. The compatibility is preserved with version 1.1

Podcast reloaded, assault and a hint

In this podcast we talk about Assault, checkpoints and Hostile Appetite, a new SP map from Windebieste.

This patch will update your AvP2 Team Fortress installation to use a new Master Server. This is a critical update (Gamespy shuts down on 2014-05-31).

This is the full installer for the AvP2 Team Fortress mod, version 1.1.2. It also contains the files needed to integrate with the master server patch...

SDK for the AvP2 Fortress mod

This is the final SDK for the AvP2 Fortress mod, containing three sample maps, the needed binaries and attributes to make maps for the Fortress game modes...

i installed this it messed up my avp2 i dunno why

That's pretty hard to do, the mod has it's own files in the avp2tf folder. What are the problems you're experiencing?

I dont see anyone, no servers are up

Usually the Russian Bears have one server up. They run CTF. Try filtering by game mode.

so did you make it so the characters are like the tf characters
soooooo predator is spy?

We do have 9 classes, like in tf, but! There are 13 playable characters. The soldier, demoman and engineer have alternative characters. Same for the heavy, which is doubled by the smartgunner.

So the class system is almost like in TF, but with a twist on ballance.

The aliens won't be removed correct?

Of course not. Both red and blue team can use marines, preds, aliens and even synthetics.