Originally, Human Error was supposed to be more difficult in the sense of how much the player would recieve and deal damage. The backbone of this idea was simple - you're a metrocop, not HEV-strapped scientist. You're naturally going to be a lot weaker. So, the damage of the NPCs were set to be equal, whereas in HL2 the player gives more damage with most of the weapons.

But this didn't prove to be too fun. The rebels would, for example, be able to shoot the player from behind before he would even notice them. Part of the problem was that rebels and vortigaunts were originally designed by Valve to be friendly NPCs. They weren't designed to chase their enemies, or do a short delay before attacking their enemies after seeing them. A lot of coding went to make them work as enemies instead of allies - it wasn't a case of simply switching allegiances. Similarly, we had to move the squad command behavior from the rebels to the metrocop NPCs.

While we eventually reset the damage variables to HL2 defaults, the idea that the player is not Gordon Freeman remains very much intact. For instance, the player can only carry limited ammount of weapons in his inventory. He has a slot for a melee weapon, a hand gun, and primary weapon, which all have to be dropped if the player wants to pick another weapon for that slot. We felt this was a sufficient step away from the all-in-one HEV suit, and sold the idea that like your comrades, you are much more vulnerable to the hostile world of Half-life. 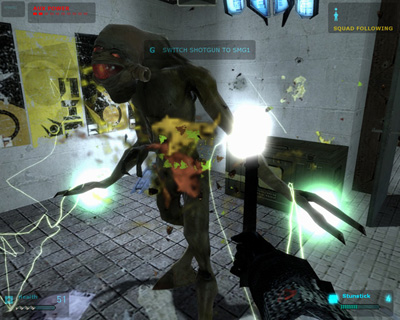 Melee weapons include the crowbar and the stunstick, the latter of which relies on the metrocop suit power to give a much deadlier punch. Hand guns include pistol, 357, and the Alyxgun. Primary weapons are SMG1, Shotgun, AR2, RPG, and the Combine turrets that can be carried in the inventory.

The metrocop player was supposed to rely on and be able to use a lot of the Combine technology seen in canon HL2 games. From this came ideas like having to recharge the generators, being able to carry turrets, and the much talked about controllable manhacks. Turrets have about 100 health and they can be picked up by double clicking the Use key, so that they will take the primary weapon slot. This function is useful if the player is driving the APC or simply doesn't want to drag the turret in physical form through the maps. With the controllable manhacks the player can fly his three manhacks to places where he couldn't get himself. 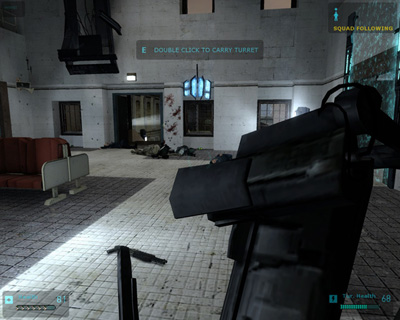 While the player is alone most of the game, he will be working alongside other metrocops. When this comes into play, we tried to stress this team relationship as much as possible. This is where the three new metrocop characters come in. They will be running around without their masks throughout the game, as otherwise it would be impossible to create any interesting characters - it's a trade-off we were willing to take. You have already seen This Is Noah. Soon we will introduce you to the two other metrocops in the team: Eloise and Larson. Hopefully you will like them as much we have enjoyed creating them.

I would also like to announce that we fired our old voice actor for Noah, and hired a new, more talented thespian to take his place. Although this news wasn't taken well by our recently departed, we think the decision was a good one.

Already looking forward to the controllable manhacks, hated them as enemies but I assume they will be fun as weapons! *evil grin* All in all, this mod is coming along promisingly, keep up the great work! :)

I'd add a VGUI screen on the turrets with a health bar.

can some one help me please