With Halloween just days away, we thought we'd share some of our "spoopy" horror inspired cards and creatures for our upcoming tactical strategy + CCG game Summoners Fate.

The world of Summoners Fate is populated by numerous creatures of nightmare and terror given life by the dark magic of the Void. While it is the ultimate source of the world's creation, the vacuum of "nothingness" is also the embodiment of fear, darkness, despair and hunger.

Dark mages seek the Void for its power to withdraw energy directly from the negative spaces from which arise creation. Feeding on the life forces of corporeal beings, they satiate their hunger and persist their wicked existence as nightmarish manifestations. Here are some of the horror inspired cards and creatures in Summoners Fate. 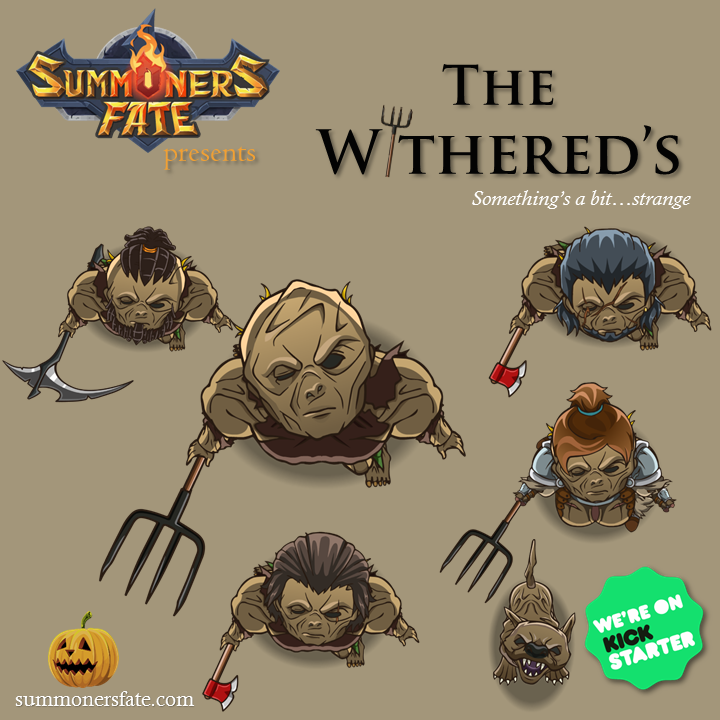 Withereds are the potato sack husk-like remains of once thriving individuals that have been afflicted by blight. While they are technically alive, their physical form and spiritual energy has been depleted to the point of exhaustion, resulting in their wrinkled appearance. They are virtually blind and are driven to their targets by an innate hunger that can detect positive energy to absorb and sustain their being.

Legends of the blight often speak of a king who, so obsessed with the persistence of his own rule, contracted an agreement with a dark shadow entity of the Void, who granted him a powerful curse that would enable him to sustain his life by taking directly from others.

Withered villagers attack a band of heroes exploring the remains of
a once peaceful farm afflicted by the blight. 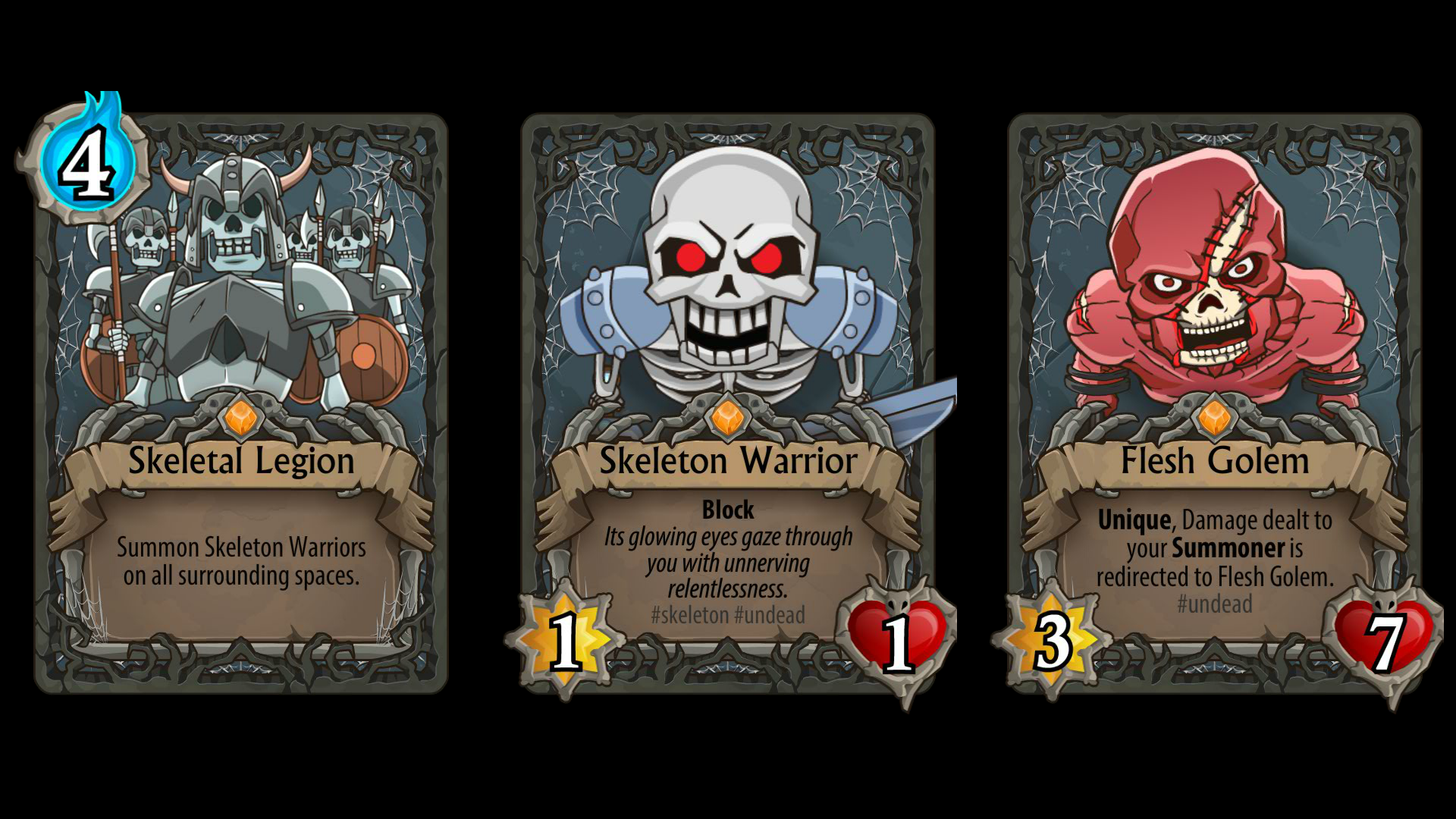 Void magic in Summoners Fate is represented by dark, spider-web like bordered cards. Skeletons are among the most prolific of the races represented by Void cards. I wanted to go above the typical expectations of summoning a lone skeleton, so when I created Skeletal Legion, the idea was to have a real impact, a badass moment of summoning a small army of warriors to throw at the opponent. While skeletons on their own are not notably strong, their shield actually makes them very tough to kill (see my previous article that discusses the Shield Block mechanic). Additionally, when linked with other cards, such as Skeleton Champion, who buffs all skeletons, they become quite formidable pretty quick.

The Flesh Golem is a classic creature returning from Hero Mages. When spawned, the Flesh Golem creates a "blood pact" with its controller, allowing it to absorb all damage received. The player loses if their Summoner is defeated, so this ability makes Flesh Golem a very high-value card. Note that his abilities only redirect life, and other effects (such as Freeze) will still affect the Summoner even as life is redirected.

Necromancer uses Skeletal Legion to surprise a band of marauders 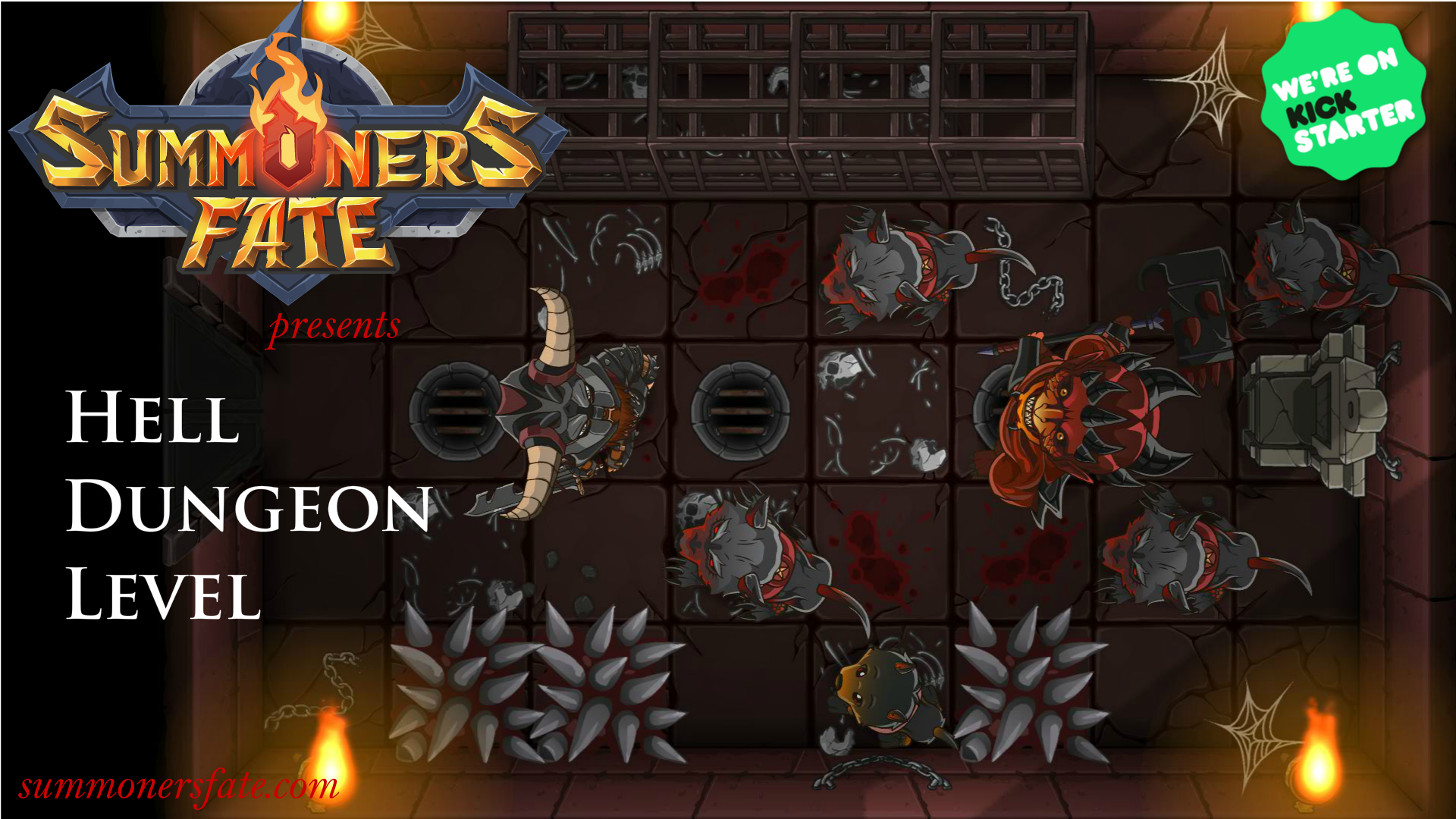 Hellhounds are vicious guardians of the underworld with razor sharp teeth and claws and burning red eyes. Their puppies, however, are notoriously cute and exceptionally rare. They are sought by adventurers for their lifelong loyalty and devotion. However, the Demon Lord is not amused by travelers stealing from his kennels, and many adventurers pay the ultimate price attempting this task. 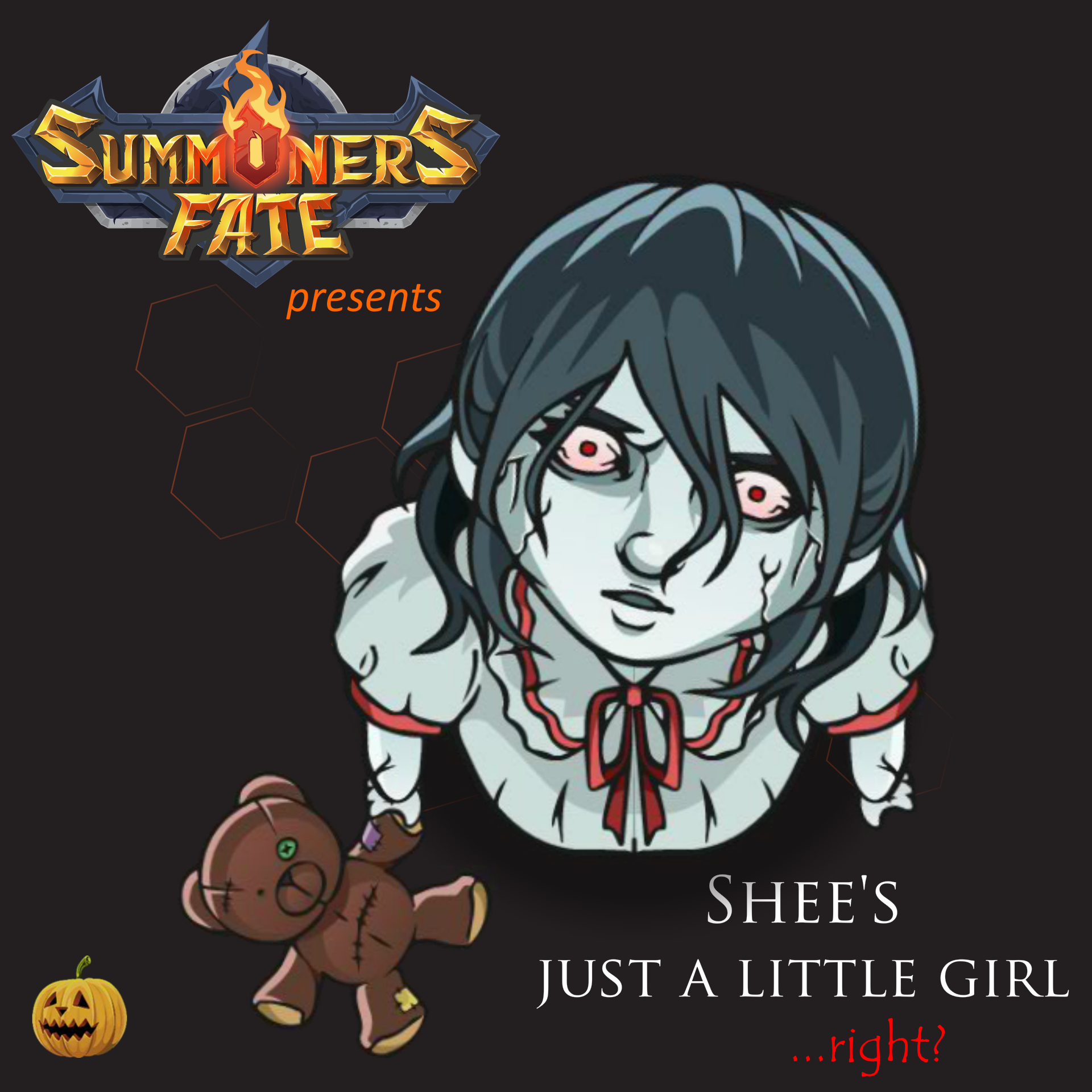 What creatures would you like to see in Summoners Fate? Let us know in the comments. Also, be sure to check out our Kickstarter and help support us: Kickstarter.com