HL2: Wars is back, and we've got a lot of fresh news as well as a couple of brand new screenshots to feast your eyes on. Information on our upcoming Antlion demo, a request for additional developers, and what the future holds in store for HLW.

Happy Holidays from the Half-Life 2: Wars team! It’s been a year to the day since our last news post, and contrary to all appearances we are still very much alive and kickin’. A lot of people have assumed we’re “dead” or inactive, and I assure you that is not the case. Sander and I have been toiling away all year (especially Sander) and finally we have some interesting news.

All of 2009 has been consumed by redevelopment of the game code. Our last public release in mid-2008 had a lot of performance issues related to the structure of client/server interaction and NPC code, so for the entire past year Sander has been slaving over a brand new codebase, rewriting everything in the mod from scratch to optimize the Source engine for multiplayer RTS capabilities. The vast majority of the mod’s code is now written in Python, which Sander has integrated with Source and used to expose much of the engine code. The result of all this technobabble? A more efficient and playable multiplayer RTS experience.

At the same time Sander has been handling the programming, I have been busy with the design and concept side of things, writing and scrapping and rewriting the game design over and over throughout 2009. We’ve finalized an initial design to work towards for our almost-mythical (and still very far off) Beta 1.0 release, but in the meanwhile have decided to go ahead with our original plan: to create a small “demo version” of HLW to showcase the brand new game code and optimized multiplayer capabilities.

This takes the form of a small multiplayer-only game mode where players command opposing Antlion colonies, competing over food and grub resources. It’s a fairly simple game type – we just want you guys to have something new to play, and this will be available long before another full beta release. You can check out a couple of new screenshots, the first showing a Pheromone Marker resource point (which generates Antlion grubs) and the second showing our prototype “direct control” feature where players can take over and command one unit on the battlefield: 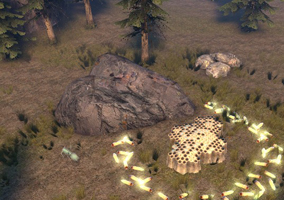 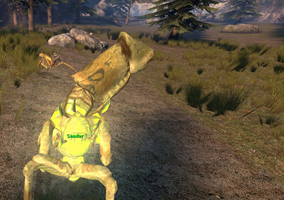 We’ll give you more details on the Antlion demo gameplay in the coming weeks and months, along with more media (including video) and a special surprise we have in store for our fellow mod developers out there, which you’ll hear more about soon. We don’t have a release date for you guys yet, but we’re working hard and promise to keep you posted more than once a year from here on out.

It's also time for us to expand the team. Right now we have only two core developers, and we need more talent to help with art content! We're currently looking for 3d Artists, Texture Artists, and Level Designers, but if you have other skills you think could help us out (like sound design or voice acting) feel free to drop us a line. You must have advanced proficiency in your area of development, as well as a solid portfolio or examples of previous work. Experience with Source development is preferred but not required. If you've got what it takes, let us know via email (hl2warsmod@gmail.com) or on our community forums.

Before we sign off, we'd like to thank everyone who voted for us in Mod of the Year 2008 and got us the distinction of being the 10th most popular released modification in the 2008 MOTY competition. Hats off to all of our fans, and here's to 2010 being the biggest and best year yet for Half-Life 2: Wars.

Yay! Can't wait for this!

I actually thought this great mod was dead for a WHILE. I'm ecstatic that it's still alive and you'll be posting news & eye-candy more frequently!

Great job, keep up the good work, and I'm super excited for multiplayer!

booyah! totally thought this was dead and now i'm excited.

Sweet! July 10th is a while away, but I think it'll be worth it. This is definitely turning out to be a quality mod!

July 10th (2008) is when we released the last public beta build (check the downloads section). We don't have an official release date for the Antlion demo yet.

Nice job, the direct control thing would serve an excellent role of distinguish this mod from other commercial RTS titles (only other title that I know that has this is MoW/soldiers/FoW)(let's not talk about the terrible job Relic did with direct fire...).

A way old game called Machines did direct control too, it was a nice feature and there's some brilliant things you can do with that functionality, anyway, awesome top quality mod *thumbs up*

I like the direct control idea, few RTS's do that properly anymore.

Yea... And Rebels are Terran, and Combine (with their monsters ^^) are Protoss. :D I see you like StarCraft. xD

Really cool work, keep it up!

epic come back, i can remember the game "machines" had direct control waaaay back in history

Nice work,this is a good Mod.

Yay :D. This was one of my favrotite mods but there needs to be more levels and less lag :P.

If you had read the latest news, you would have clearly read that we have been working for the past year on totally rewriting the code. That means less lag.

The one of the most perspective projects on the source...
But the name must be just simple "Wars" or "The Wars" (Short and descriptive, the good name for a game), IMO, because we (players) are not stupid to understand by our selfs that this is a mod for Half-Life2...
I think, the good step will be - deleting the Half-Life2 from the project name, because there is no point in it...

Sorry for a bad Eng, hope u understand me...

I think that's a terrible idea. Please don't ever suggest it again.

It has absolutely nothing to do with who's "stupid" or who's able to figure out that this is an RTS based off of Half-life 2. You really need to think outside the box. Theres many reasons to keep the name, in fact many gamer's have a positive association to the Half-life name so by using the name that positive association is also being associated with their mod. That's only one of many reasons.

Great update. Nice to know this project is still alive, and the new stuff sounds great. Can't wait to get my hands on it.

I can see some great updates.

i dont like games like this but this one... is very well done, i played the demo as well, what can i say? its Half Life dudes =O