Greetings to all who continue to follow this project! It’s been over a year since our last update and, perhaps, it's time to tell you the latest news of our project.

Greetings to all who continue to follow this project! It’s been over a year since our last update and, perhaps, it's time to tell you the latest news of our project. 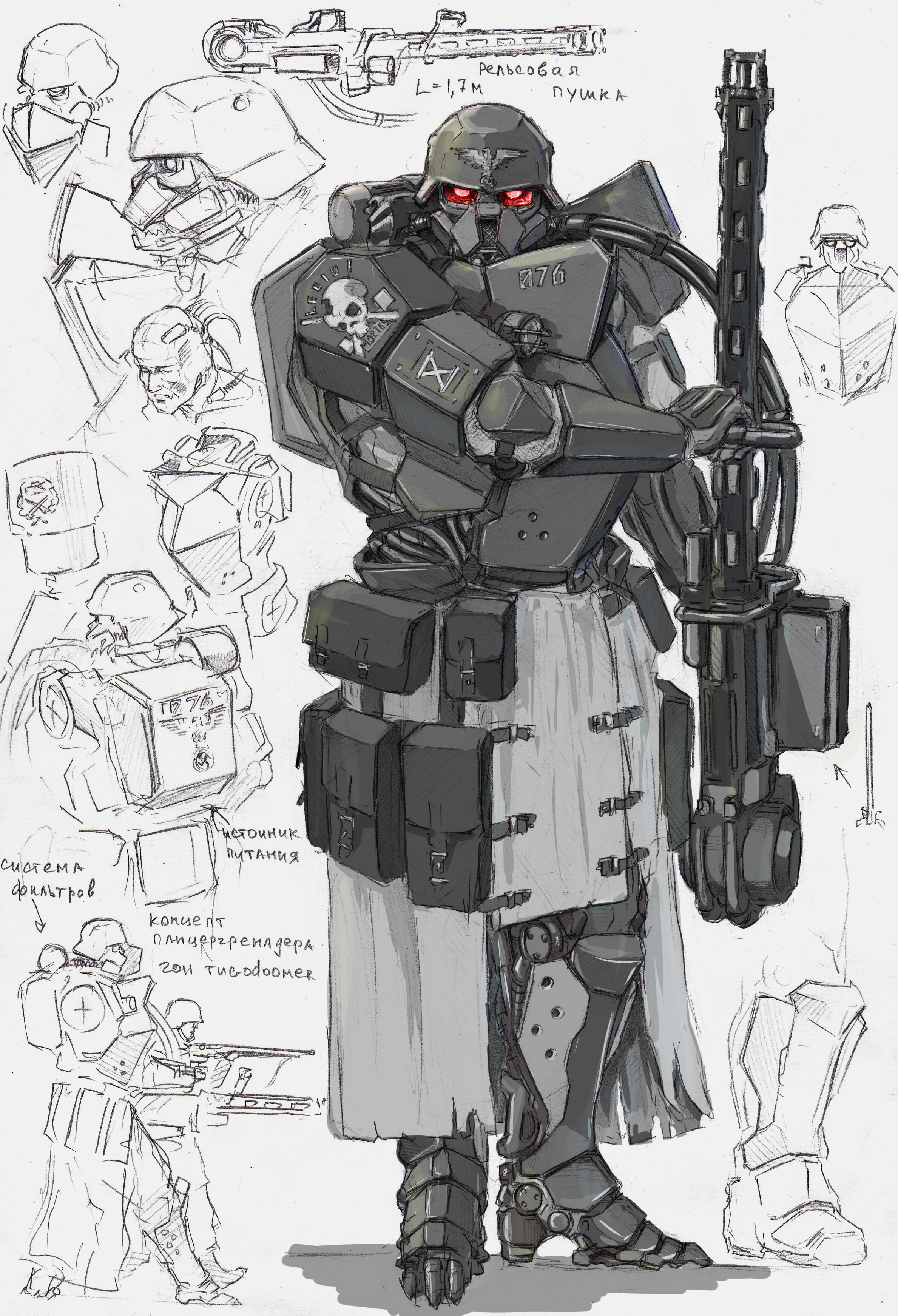 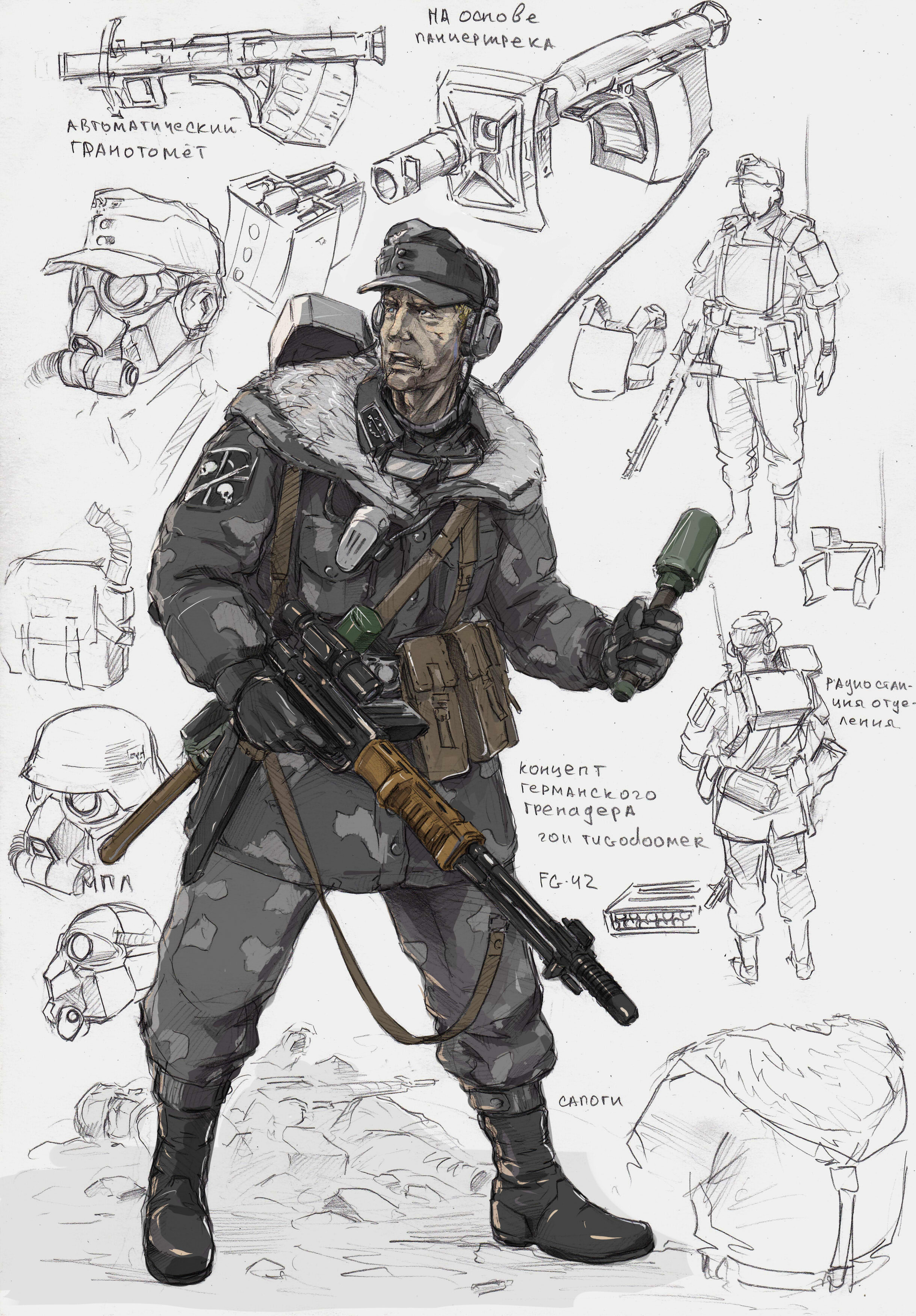 Therefore, the Reich faction in the Red March was made to be made quite unusual, based on the themes of transhumanism and post-cyberpunk. The first concept art for the Reich faction was made in 2011, and the last in 2012. The evolution of the image quickly led us to the cyborgs, encased in armor and covered with implanted devices. 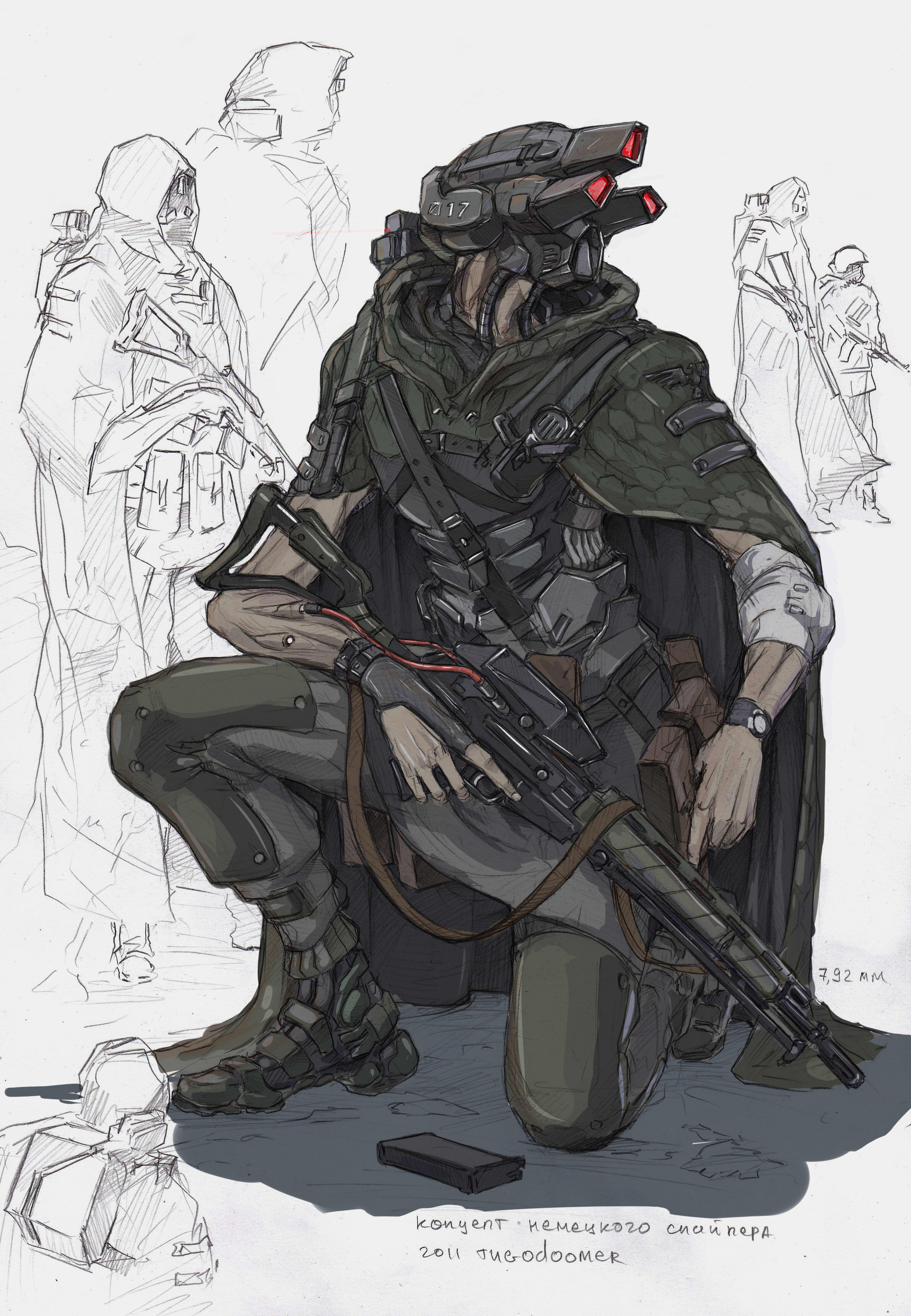 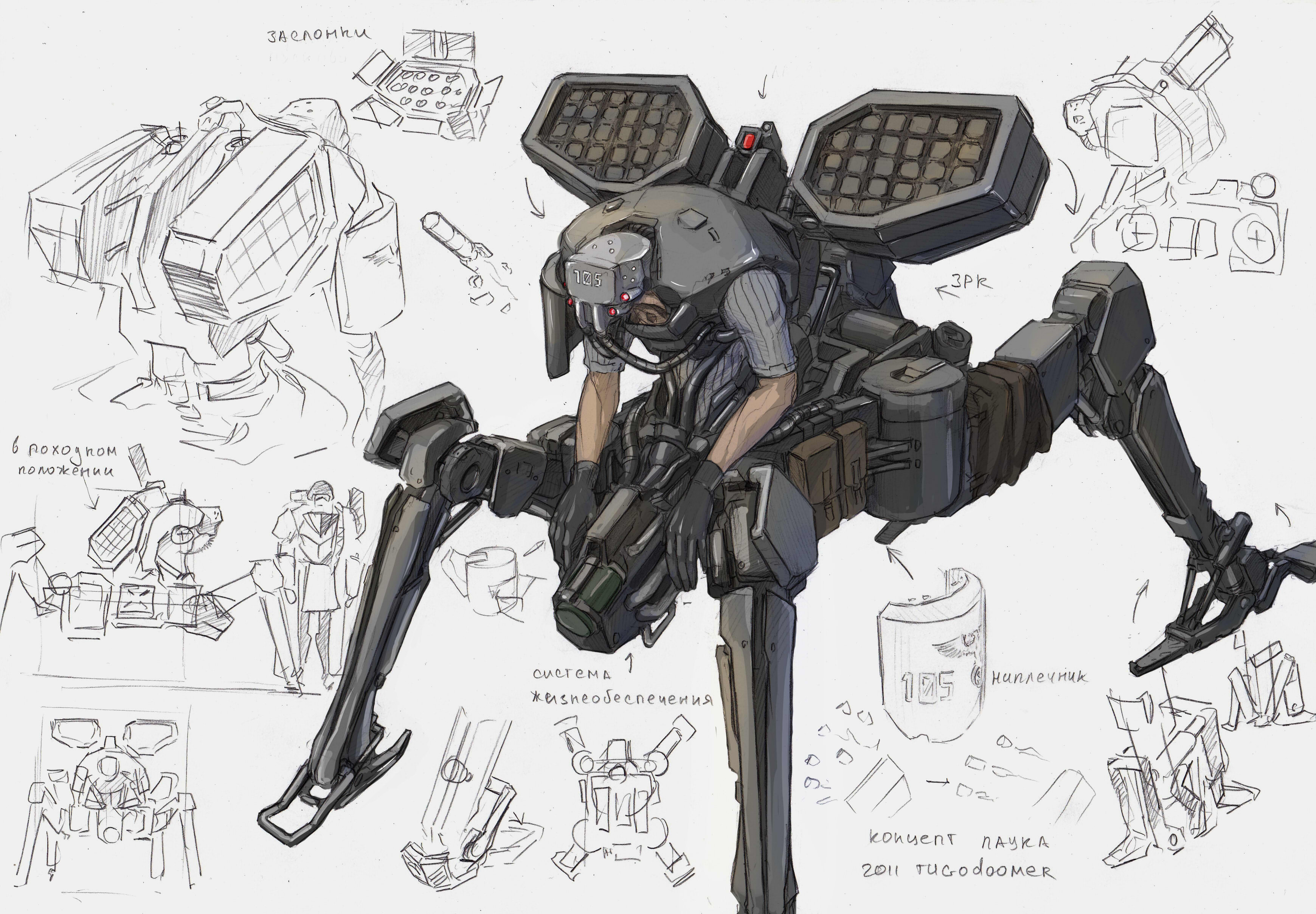 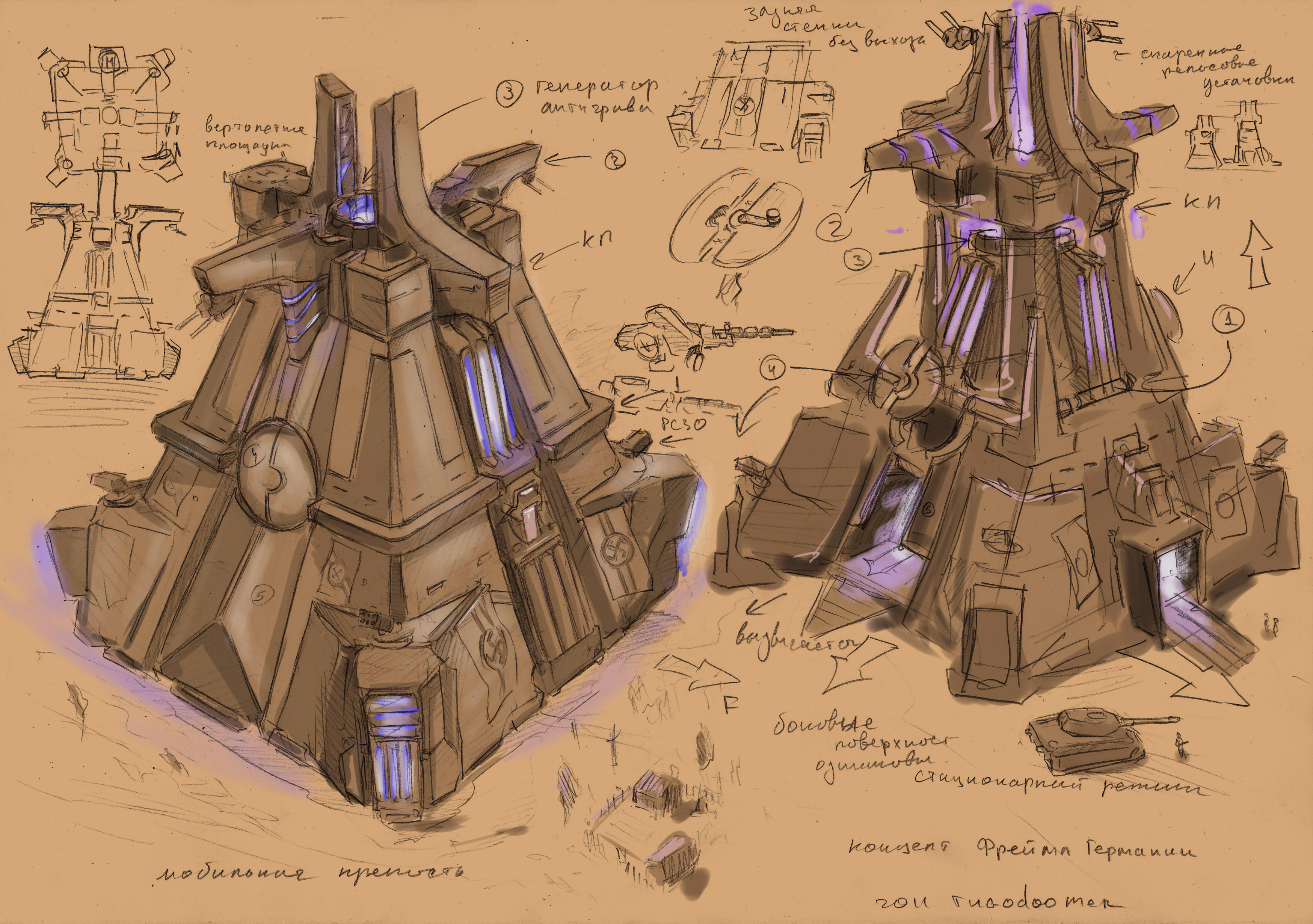 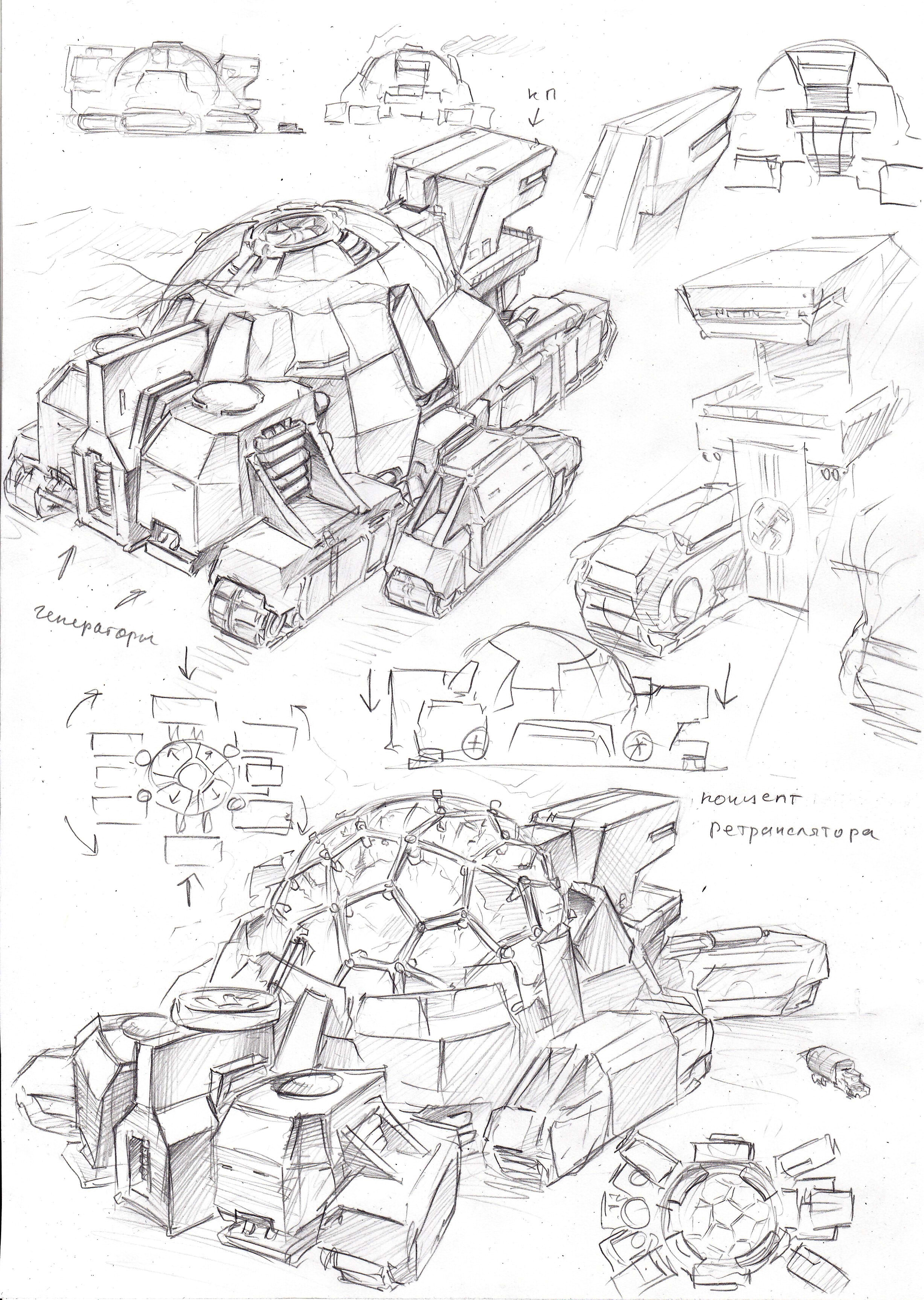 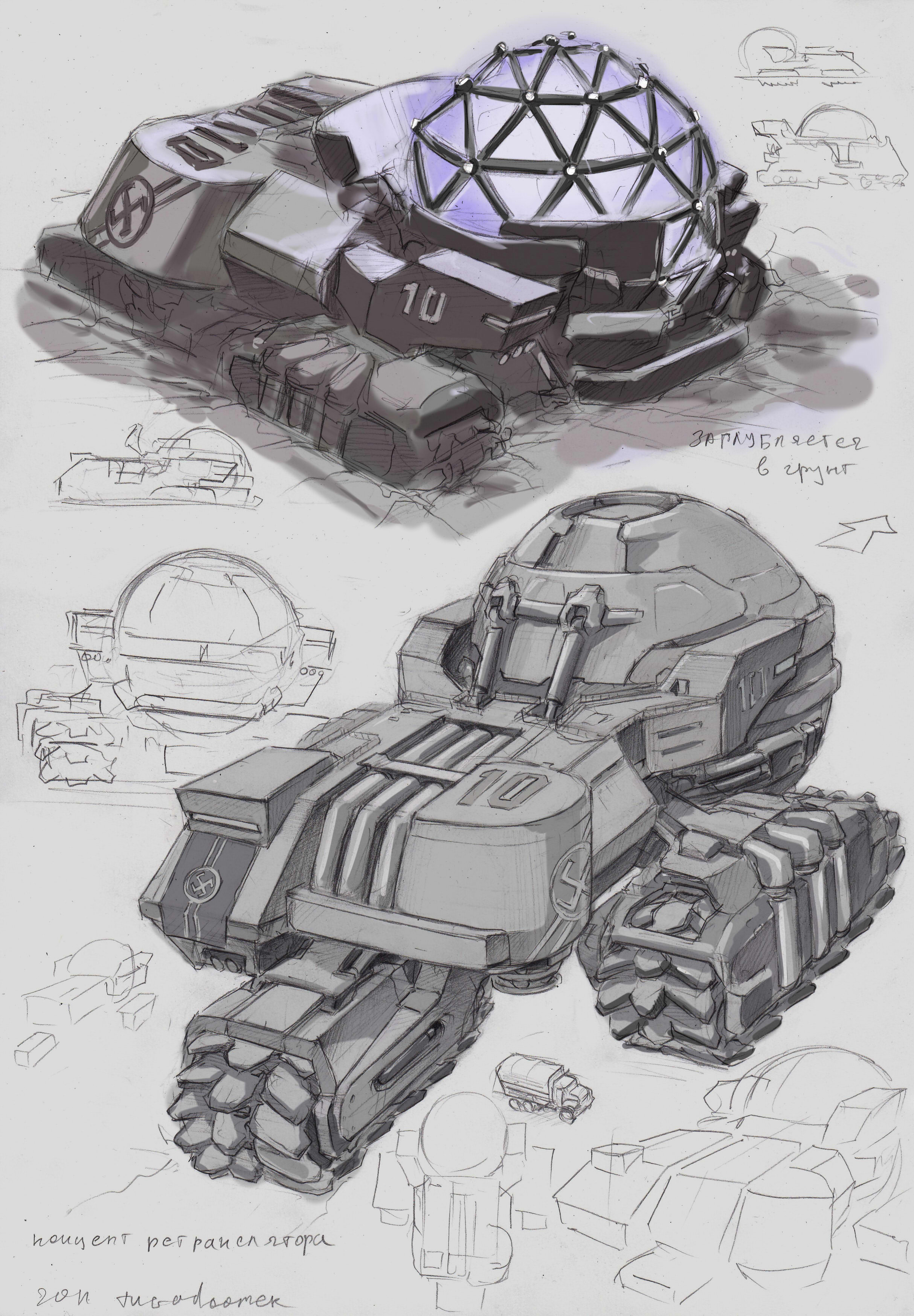 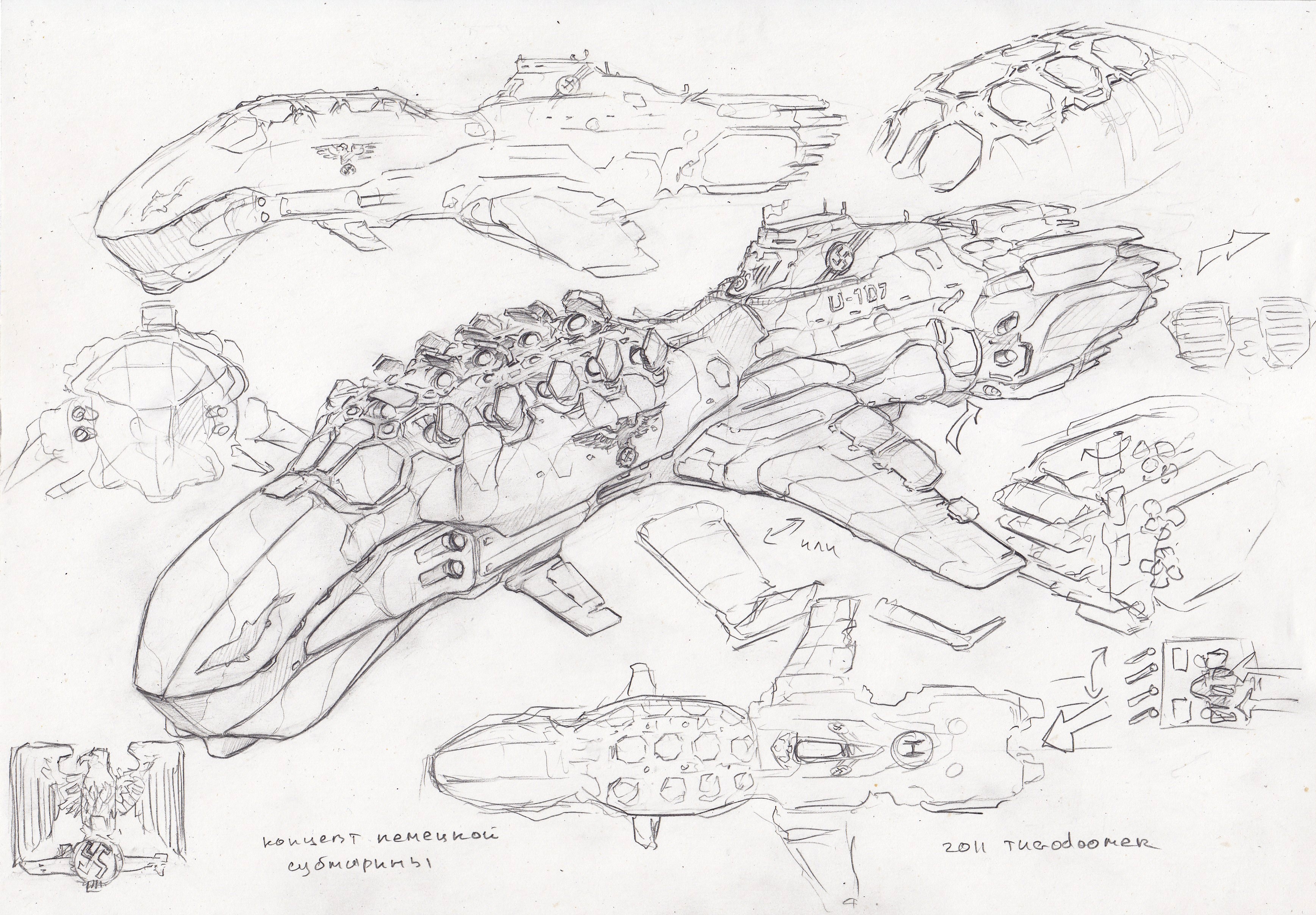 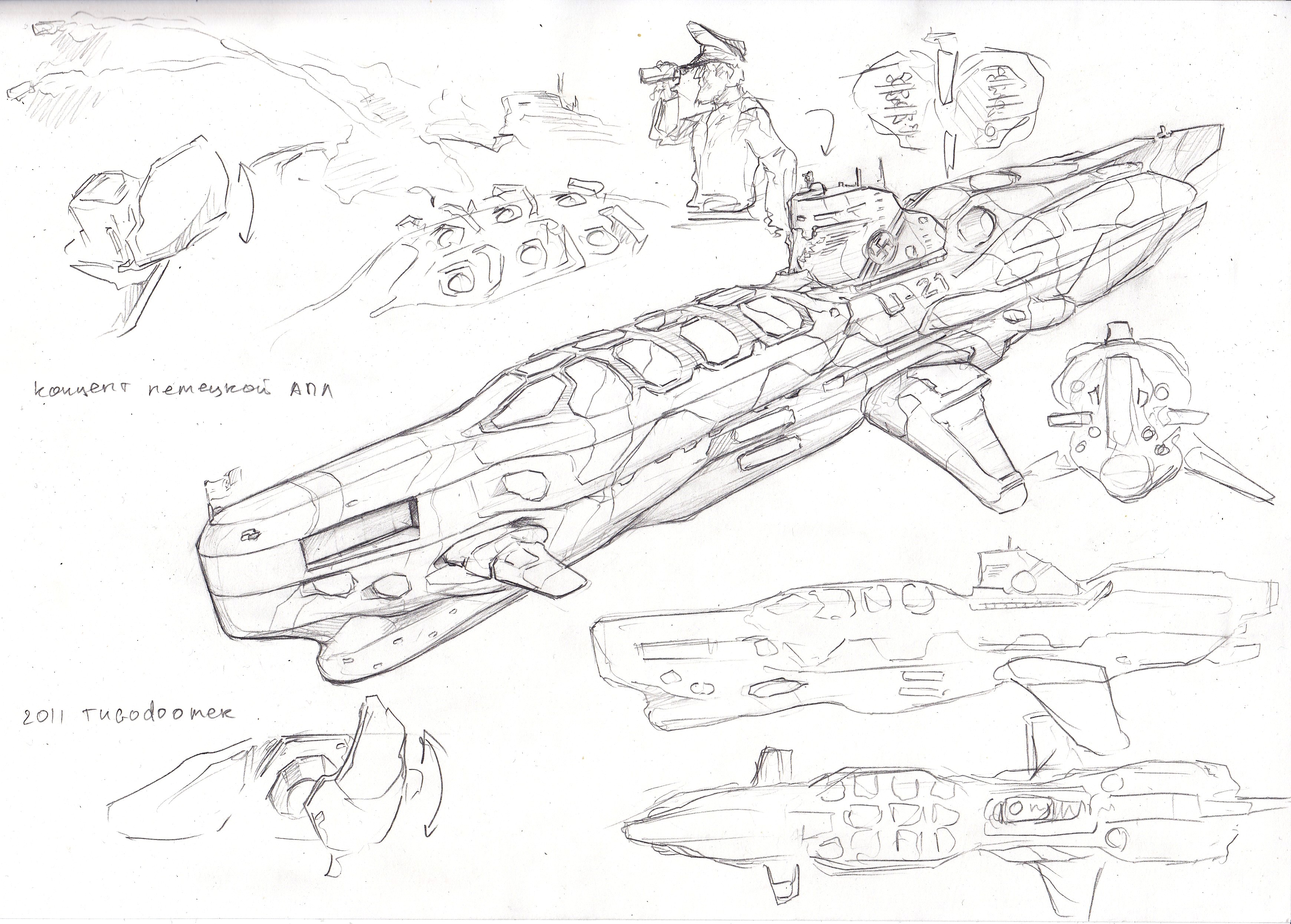 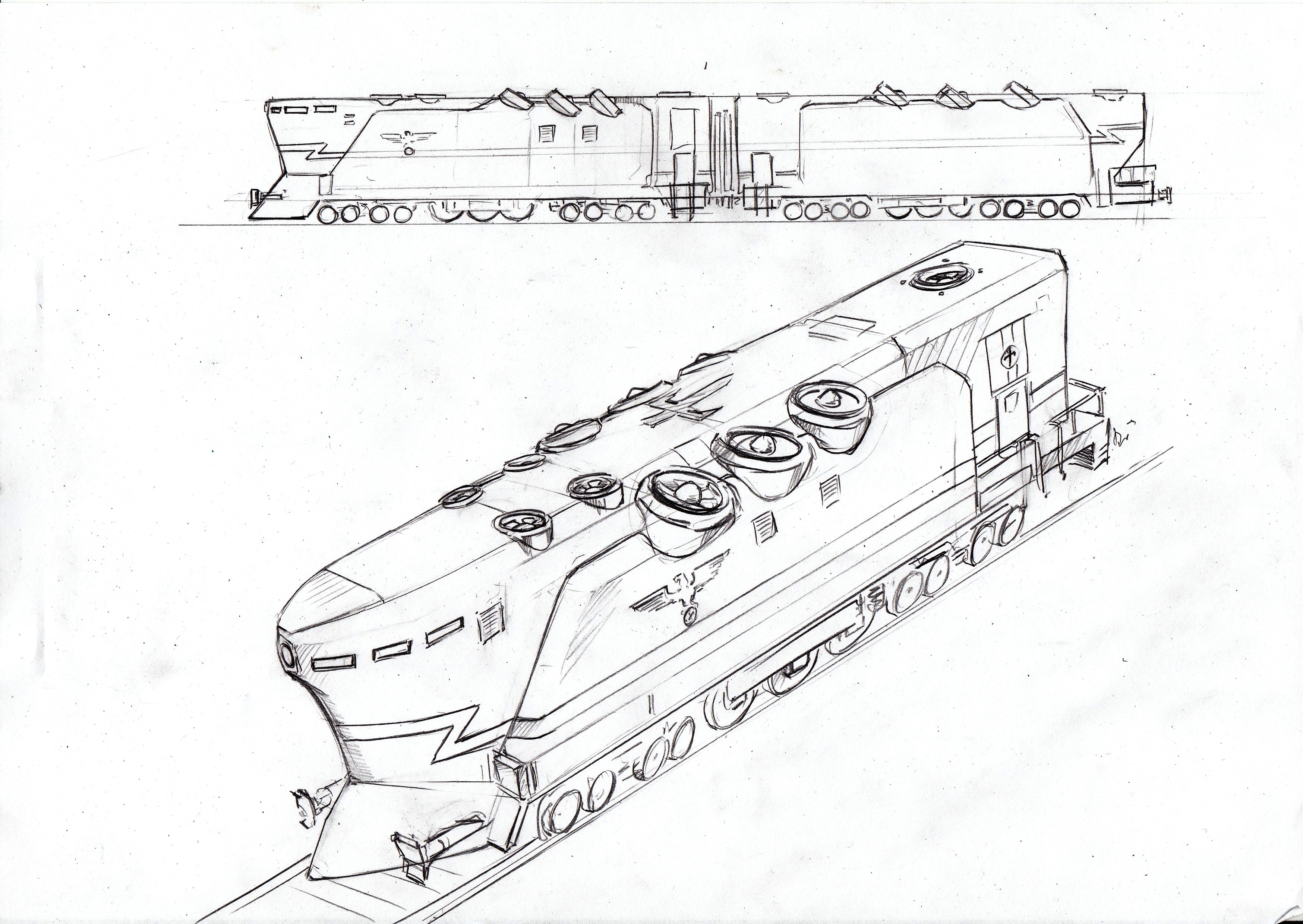 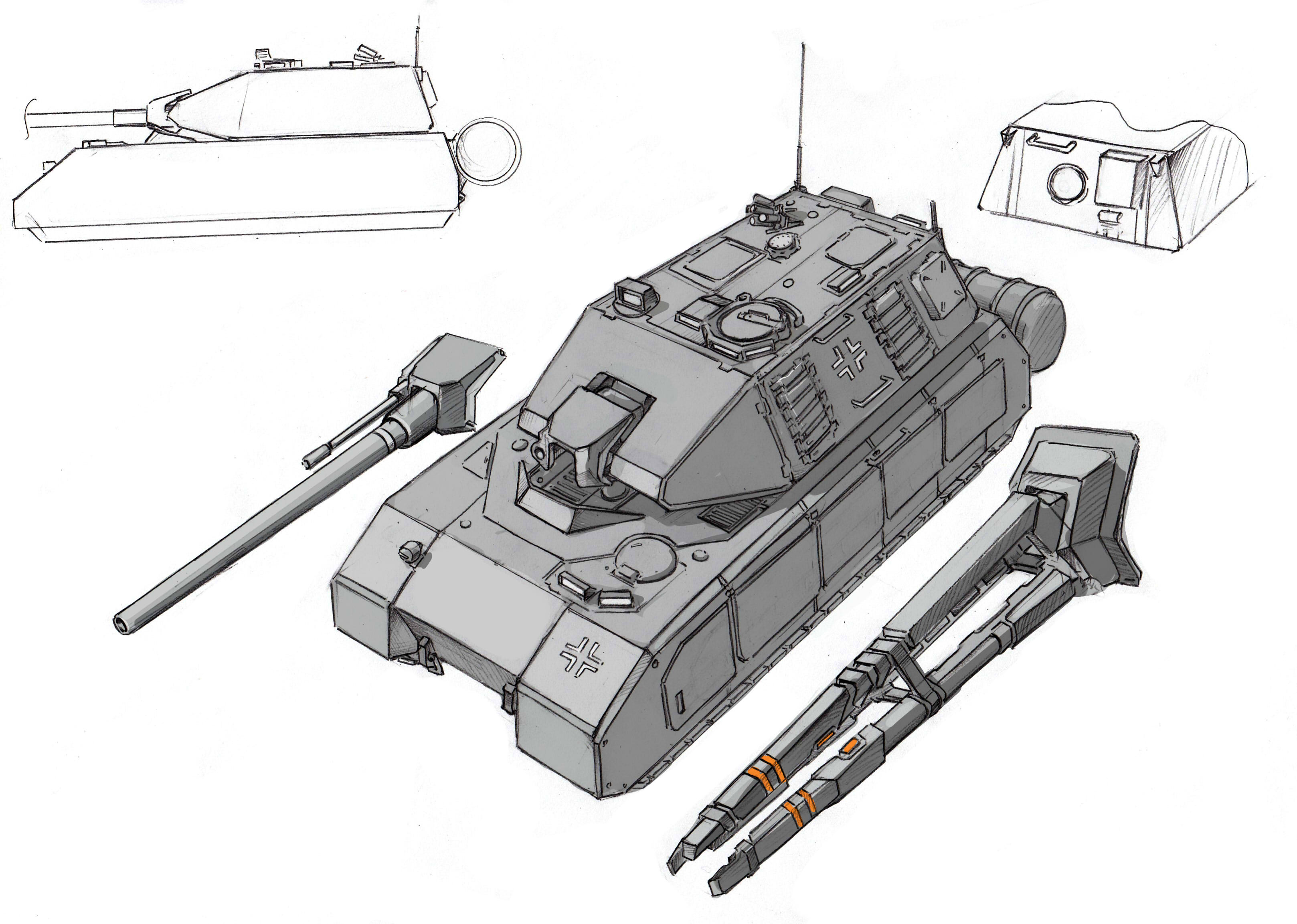 However, their ability to transfer objects to other worlds was very limited and needed many years of preparation. Therefore, in the Red March world, the Nazis waited several decades before striking their blow on a world weakened by the conflict. They contacted the Third Reich during the local WWII, but the huge difference in the technical base and limited teleportation abilites did not save Germany. 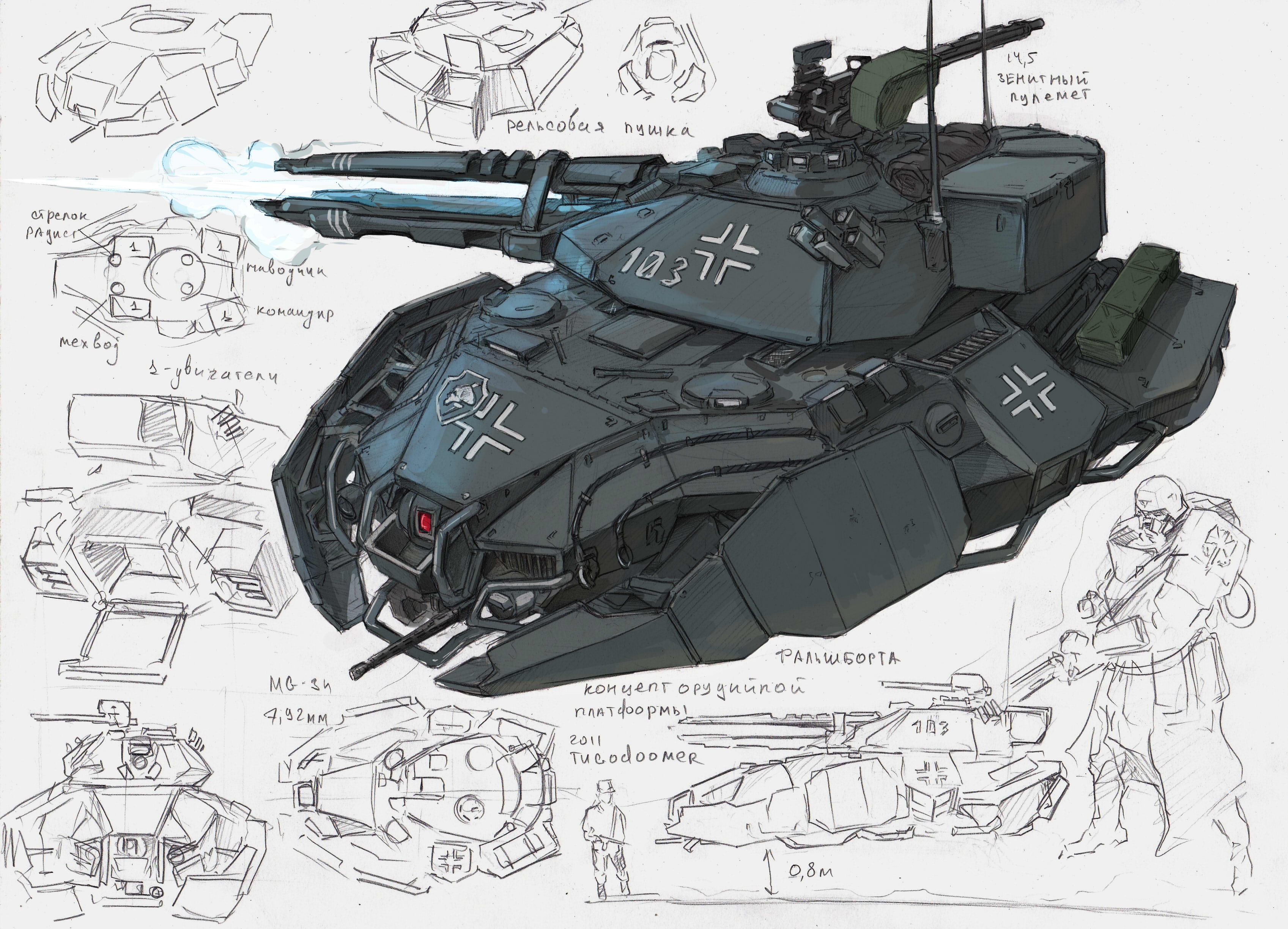 Hidden away in their secret bases, they manipulated the superpowers and their blocs, pushing them and provoking a world war. Finally, in 1969, they are ready to reveal themselves...

News from the front

Unfortunately, not all the news is good. We recently reloaded the software component of the project to keep up with the times and switched to more recent versions of the Unity engine. Also, we found a new programmer and 3d artist, but they are still new to this, so the work moves very slowly. The screenshots below show a VERY early period of work on the prototype game.

The problem is that the team has several professionals who have background in the gamedev industry, but we desperately lack the same professional enthusiasts in the field of programming and 3d modelling. Because of this, the work has almost been frozen in place for several years.

Nevertheless, we are working on a prototype game on the latest version of the Unity engine. At the moment, the behavior of the units and their interaction with the buildings and with each other is being adjusted. Most of the graphics have not yet been completed, so the screenshots are very crude and ugly.

The future of the project 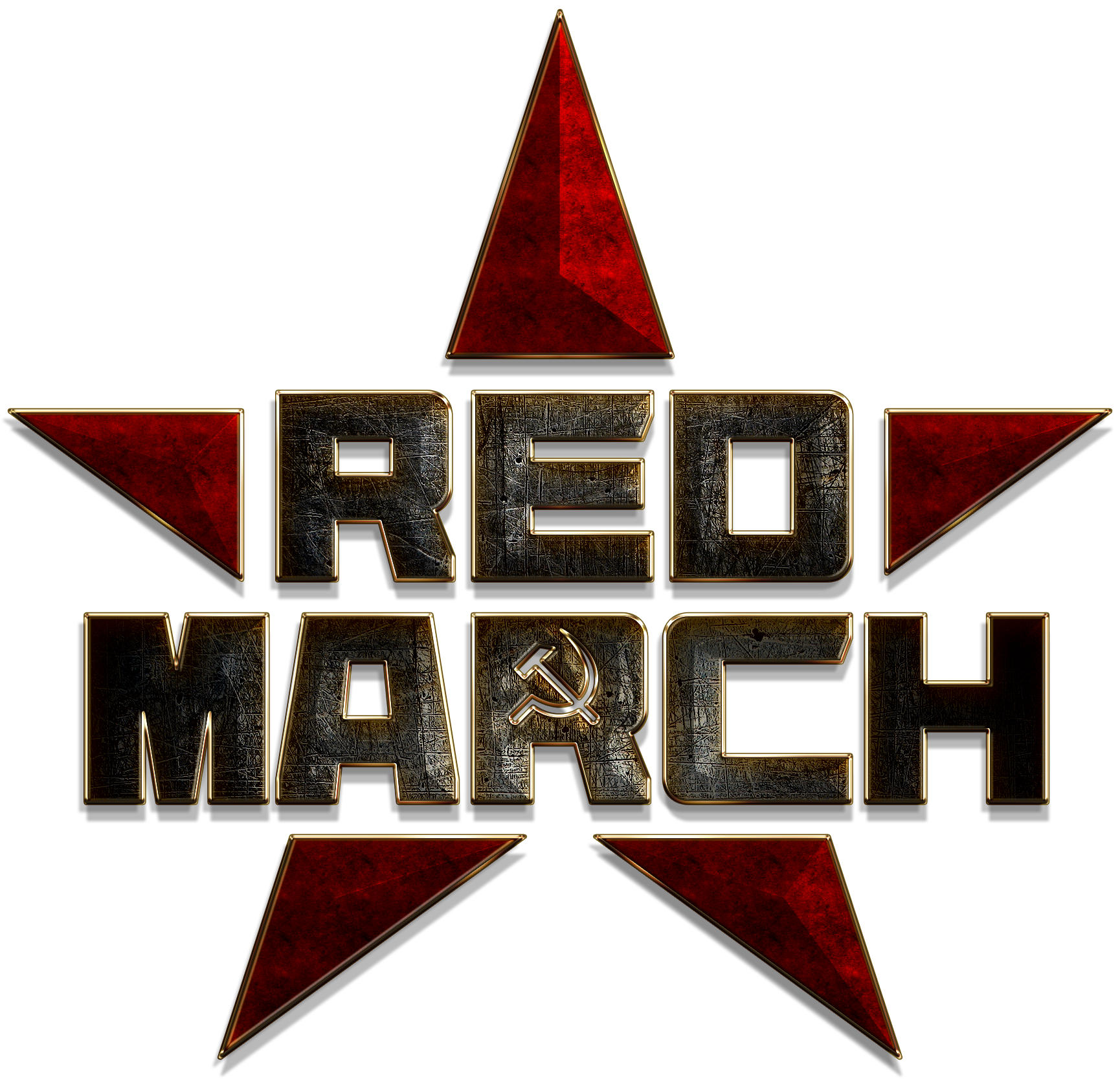 Soberly looking at their current capabilities, it was decided to go to Patreon's crowd-funding service and publish our experience and design documents on the site. Patreon allows you to make monthly payments to authors you wish to support, the author in return gives you certain rewards depending on the size of the payment. What does this mean? Collected donations will go to stimulate the development of new content. As the main incentive for donations, we offer access to various exclusive content, which will be laid out in private publications. This link leads to our Patreon page.

Red March is becoming less of a developed RTS, and more of a sci-fi setting. In the end, an intriguing and interesting visual design is what we are the most proud of after all these years.

Full-scale development has been practically frozen due to lack of funds for this. We have the potential, but there are not enough people in the team. Moreover, we even had to scrap the site that was being prepared for the setting, due to not being able to pay for it.

We are still looking for an investor or producer for the project and are open to suggestions. We have cost calculations, a development plan, payback calculations, a concept paper, pitch, everything that is necessary for business.

At Patreon, we plan to post the profiles of units, buildings, information on the world, design documents and other interesting tidbits. In addition, there will also be a previously unreleased exclusive, but it will be available only for those who have made a paid subscription.

We have just received permission to publish the materials and will soon start uploading them. We wanted to publish this news last month, but there was a delay because of a long conversation with the support services of Indiedb and Patreon. In our difficult time, you can get problems even because of the concept art with the Nazis and their symbols, so we preferred to settle this issue with the administration. Stay with us and welcome to the world of the Red March!

Thank you for supporting us and showing interest in our project for all these years. We hope that you will continue to support us, especially through Patreon.

Are you a 3d artist, programmer or even concept artist? We would love to have you on our team. Email watchdream@gmail.com to apply!

P.S.: Meanwhile, I (i.e. Watcher) have personally, apart from the Red March, began publishing content from my self-made universe called "Interbellum", a fusion of dieselpunk and fantasy. This is a purely creative project without commercial ambition (at this moment). For those interested, here is a link. Yes, it is Patreon-based project too, in some sense, created as an alternative to RM.

I guess you people haven't considered changing the engine to UE4.
If you haven't, please consider it. It's a faster work pipeline, prettier engine out of the box and will run eventually better if your team codes things right.

Unity isn't (yet) something that's completely on par with UE4 and I've seen lone programmers do incredible stuff in an incredibly short amount of time with UE4.

I really really love your concept, and I hope to see it come to life in the next years.

Edit:
I just found out that all the other C&C-like RTS projects using Unity are either dead or on the slow lane. Please don't fall like them.

Another Red Alert Mod, the drawn pictures looks good but how it will loke in really 3d model? And that you will made Germans Nazi look like zoombies or human-robot body do noot look good, because Germans Nazis never took experiments on "Arier", they use captive soldiers or other people from other countrys for experiments, yes and germans love delusions of grandeur, so the armagedon tank from red alert will not be right there, because soviets have produce most small tanks, like t34 and russia do it until now like t 90, so the biggest tank must have the germans, and the Panzerkampfwagen VIII Maus, i think it is bad idea to put it here, drawn better a tank that will looke more brutally, modern and progressive. the idea with the trains look very nice! not many strategy games have trains, and mostly the do nothing in the game. i think the best way how to drawn models is not to use abstract design, but combine real prototypes of buildings and for example cars, tanks and mix them with little progressive technology, abstract designs have two problems, first you need a good fantasy, because for example a tank must looks good- have a good design, the second point the tank must see like real tank and not a tractor with a canon like in some games or like toy). i think abstract design should not be the main theme of the vehicles, it only should give the game more fun, like a сhopped pepper for a good taste of the meal. this is only my opinion it possible not reflect your point of view, so do not judge strictly) i cnow it is really hard to make a game without money and a good team, but i wish you the best, the idea is not bed, butt your game must be noot only another redl alert clone or mode it must have own style and gamedesign, so i hope you will find your way and and that all goes well with you! good luck!

Consider more periods in your sentences. That was exhausting to read.

Looks Really Good ! if you need Architectural Modellers just PM me up ? What Engine is it by the way ?

yay! glad you are back!