Let’s talk about Venus as one of the major parts of the Daedalus' story and as the point of interest for future explorations within our Solar System. Nowadays, Venus and Mars are the most attractive planets for colonization and terraforming by humanity...

Let’s talk about Venus as one of the major parts of the Daedalus' story and as the point of interest for future explorations within our Solar System. Nowadays, Venus and Mars are the most attractive planets for colonization and terraforming by humanity.

I’ll post the lore about construction of the Daedalus Space Station in the future updates with tech spec of the station. Here’ I’d like to take more about the Venus mission themselves.

One of the reasons induced humanity to begin Daedalus program on Venus orbit in 2089 was the high approachability of the planet compared even to Mars. Indeed, we can launch missions to Mars every 4 years only but to Venus – almost every year.

"How long should it take to get to Venus?" - that was my original question on NASA’s Reddit 7 month ago. I made some researches and calculations and it turned out that modern (and close future) spaceships flied and navigated along ballistic orbits only; thus, that question was mostly about Kepler's laws of planetary motion.

My first based calculations you might found there leaded me to the answer: 53 days (Earth days). Though, that was too vast and too simple solution.

Guys from NASA on the Reddit shared the link on their Ames Research Center Trajectory Browser. That useful tool counts various parameters to find spacecraft trajectories to planets and small-bodies. Here you can see the calculations I’ve made for the Daedalus Missions (as well as you can experiment with your own ideas using that tool): LINK. 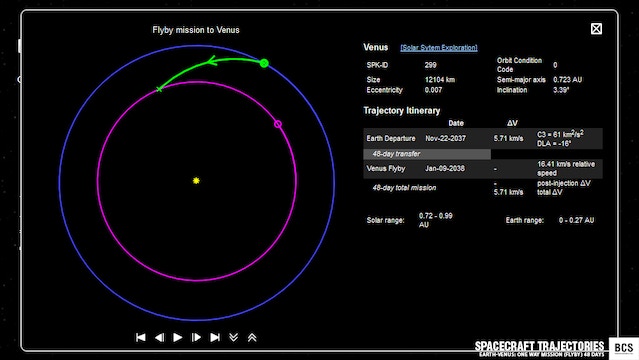 And the optimal trajectory for the Venus one way mission (rendezvous): 64 days: 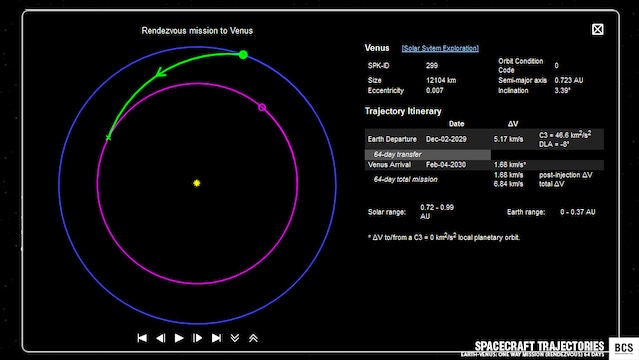 Albeit, we can see the different picture for the optimal trajectory for the Earth-Venus-Earth round trip mission (rendezvous):
• 128 days transfer E-V;
• 479 days stay;
• 96 days transfer V-E: 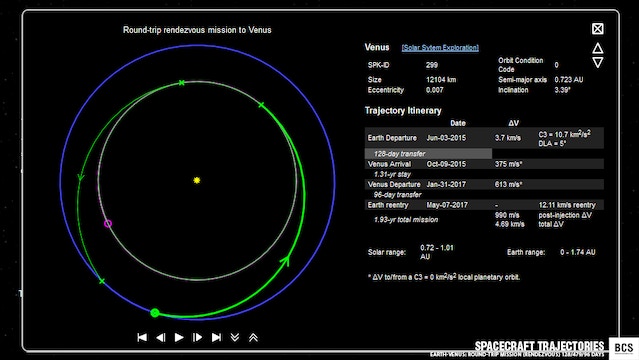 Despite the calculator I linked above works only up to 2040 while the game takes place in in XXII century, it clearly displays the recurring cycles. Thus, with the model of Round Trip Rendezvous mission the launching dates for missions will occur every 8 years: 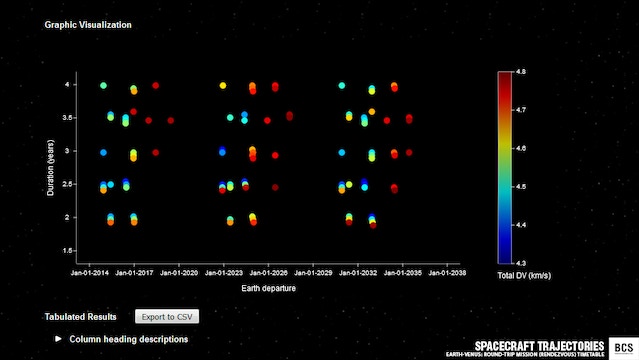 That would be too long for the Daedalus Mission in hands: manned Venus Space Station, with 2 manned transport spaceships (“Sunlight” and “Chennxing”) – one of them is always docked to the station while another is on Earth, they change each other swapping the Daedalus crew.

So I made another experiments and find out fitting solution (it looks like): There are another optimal trajectory for the Earth-Venus-Earth round trip mission (flyby). In that way the whole mission comprises:
• 112 days transfer E-V;
• 0 days stay;
• 272 days transfer V-E.

Thus, the whole cycle should take around 1 year. The good thing is that the window for that cycle is open annually as well: 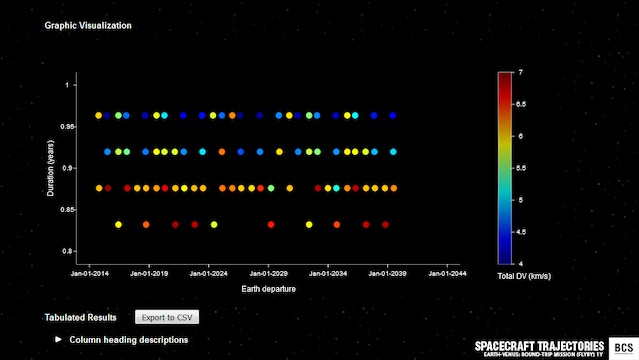 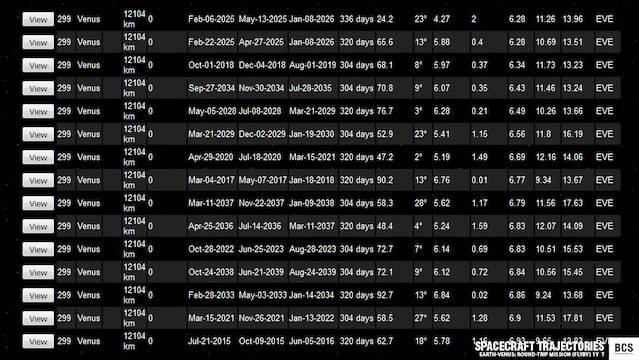 Finally, that trajectory and concept should allow to keep the DSS operated and manned all the time, with 1 year crew change cycle. That matches the storytelling pace in part "...Only thirty days remain until the next crew rotation..."

That illustrates how the concept of the mission found harmony with storytelling and science through the hard sci-fi approach.

Frankly, since I began to seek science about that planet I’ve found so many thrilling facts that I could not even suspected before. I don’t feel to repost science here but I am going to put relevant links so that you could check them yourselves. Most of the facts you will browse were put as science background for our game and became a part of our setting.

That is the basics you should know about Venus:
• En.wikipedia.org

The history of its exploration (there you might find links to the drones Daedalus crew use for planetary researches; that drones operate in the relatively mild temperatures of Venus' upper atmosphere):
• En.wikipedia.org

The concepts of Venus terraforming:
• En.wikipedia.org

Life on Venus (Venus’ biosphere is the primary focus of Jill’s studies):
En.wikipedia.org

Thermoacidophilic extremophile microorganisms that might exist in the lower-temperature, acidic upper layers of the Venusian atmosphere (they are one of the objects of observations DSS drones are used for; they takes probes in the Venus' atmosphere in specific areas):
• Newscientist.com
• News.bbc.co.uk
• Sciencedirect.com

And one more for those who want even more Venus science (about its geodynamics):
• En.wikipedia.org

Well, I hope you like that lore about our closest sis-planet. If you read that basic science, you’ll be one more step closer to be ready for the Mission that awaits you in Daedalus video game.

Thanks for your support, guys!