As you might have guessed by the date, one or more parts of the last news may or may not have been true;)
Joking aside, we did actually show you something last time: the new base model of the Tau'ri infantry.

Of course the Tau'ri soldiers won't be running around the map grinding down some healing herbs.
This is the kind of mortar they will be actually using: 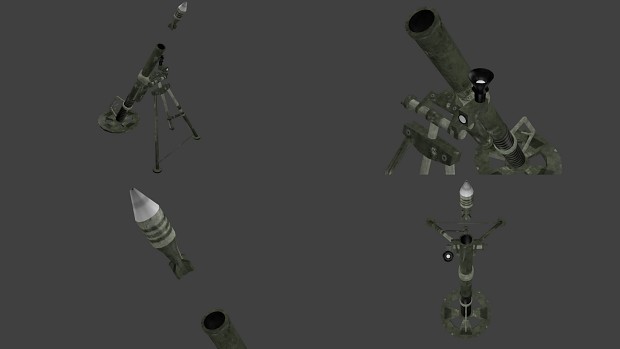 And speaking of healing, let's follow this up with the new medic unit: 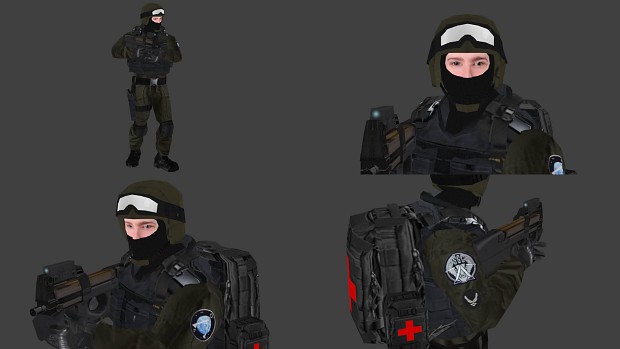 With this new we have more than just images to share: a new patch for the Pegasus Prelude campaign is waiting for you!
We've made great progress, especially on the Wraith campaign. It should feel much more complete and rounded up now.
If you want to learn more about Pegasus Prelude don't forget about our wiki: Stargate-eaw.de

You can download the patch and access the full changelog through the launcher (make sure it's in "OpenBeta" mode) as usual.

General:
- Added/removed hyperspace capabilities of some fighter units were it was necessary
- Removed 'Spotted' SFX from faction files

Ancients/Asurans:
- Fixed an issue with the Dreadnought version of Moros not having any speech sounds
- Melia will now die 'properly' - no more hero head icon after death
- Delphi and Pride of Troy are no longer major heroes (they don't respawn after death)
- Changed tech level of the Ancient_Space_Building_Sensor_SS from 4 to 3

Tau'ri:
- Increased damage of the GTSW and changed the construction costs to 3500

Wraith:
- Removed the pop cap of the Kamikaze Dart
- Removed hyperspace capability of the Exp. Dart
- Added price reduction ability to the PP Queen
- Increased damage of the GTSW to 300 per projectile and changed the construction costs to 3500

PP GC (Ancients):
- Fixed an issue which would cause convoy mission transports being stuck at the exit point
- Slightly increased performance of the script at various locations
- Fixed an issue which would cause the Tau'ri starbase to spawn if only Asuran units were on the map
- Added the Fortress for the Asurans
- Decreased the chance for the Arcturus mission still being active even after the Aurora tech already became available
- Increased the time for the player to construct the Arcturus device before the mission times out
- Increased the chance for the Asurans being friendly towards the player for a longer time making it more lucrative to invest in their research

PP GC (Wraith):
- Added debug events for the Wraith story line
- Removed the AI lock for the Vanir planet which caused the planet to have a red glow. The AI will not move there and the Vanir are allied to the Ancients anyway.
- Significantly changed the story script for the Wraith. There is now one single attack function for all attackers
- The Gonta revenge fleet list will now try to spawn at Dagan
- Tried to make the story mode service code more efficient
- The Asurans now spawn a lvl 5 starbase
- The Arcanus attack fleet and the Gonta attack fleet will now both try to spawn on Taranis to make it less likely that the fleet will arrive after the resp. mission has been accomplished
- Removed some Ancient starting forces on lower difficulties
- Fixed non-working price bonus for the Hive on Arcanus
- Significantly decreased the difficulty on lower difficulties. Especially the attacks at the beginning are much weaker now
- As soon as the Dreanought event starts some of them will be spawned on Taranis
- Fixed a potential crash in the Moros upgrade event (Sleep was set _after_ TestValid())
- The Dreadnoughts produced on Taranis will now properly attack the player
- Fixed Delphi not being registered as dead in the Gonta event making it unable to win
- Added additional fail possibility for the Gonta event in case the City Ship retreated during battle
- This also prevents the possibility of an incorrect text of the Ancients evacuating the settlement when they take the planet back even if Delphi wasn't present
- Also fixed an issue which would cause the Delphi-successfully-defeated event to trigger even after the planet was lost and the mission failed
- Increased the chance of Asuran or Dreadnought attacks compared to regular Ancient and Vanir attacks if either of them are active
- Added 'final hints' text strings to the story dialog so it would finally show up and not just show an empty log
- Fixed an issue with the finale text not being displayed due to duplicate event names
- The Athos/Orakis final missions will no longer time out after they have been played
- When the final mission is won, the player fleet will no longer retreat
- Orakis Mission:
-- Reduced the difficulty for this mission on Easy and Medium settings (Wave strength and number of defense satellites)
-- The Wave spawn entry point is now a bit further away from the area that needs to be secured
-- Added missing objective to secure the landing zone if they player killed the under construction ships before the timer was up
-- Reduced the speed of spawned capital wave ships
-- The wave ships will now properly move toward the landing zone
-- The mission is now marked as 'won' in the log after it has been completed successfully
- Atlantis Mission:
-- The transport ships will now properly move towards the descent zone
-- Fixed hero death events not working (Find_First_Object() requires capitalized input strings!)
-- Added a function to track the status (spawned, dead) of each hero that triggers player victory
-- Fixed an issue which could cause a hero not to spawn as tranport escort
-- Revealed spawn area of Melia and the first transport
-- The mission will now be lost when all Wraith ships have been defeated

Keep in mind that this is still a beta version. The campaign can be unstable so we advise you to save often!
Please do let us know about any problems or crashes you encounter. We also continue to highly appreciate any feedback or suggestions.

Have fun with the new update - and Happy Easter!

How do I get this to work? My launcher (v1.4.4) just goes into an update loop. As a consequence I cannot get this update. Is there a way to manually install it?

Hi - sorry for the late response.
Currently, we don't provide the open beta builds as a manual download.

What is the launcher trying to update in the loop? A launcher update or a mod update?

Either way, if your launcher version is 1.4.4, then you should try to get it up to 1.4.6, which is the most recent version. Try to delete and re-download the launcher from the downloads section. It should then update to 1.4.6.

In case it keeps downloading a _mod update_ and updating the launcher to 1.4.6 doesn't resolve the loop, you could try to reset the mod in the launcher settings. If that doesn't help, open the mod directory and delete the patches folder, then try again.

(Make sure you have selected the "OpenBeta" user mode in the launcher settings.)