It seems that the Half-Life update that caused so much disarray a few weeks ago has been massively blown out of proportion...

Every day, I see comments relating to Half-Life and its mods on this site. People saying that since the linux update, Half-Life mods simply don't work any more and that Valve have screwed over the modding community. This could not be further from the truth and the whole thing has been blown out of proportion!

Sure there are some mods out there, some very well known ones, which have been affected by the update, but these are mainly due to engine modifications made my the modding team. Most of the mods experiencing these issues have heavily modified the engine to raise the graphical capabilities and make the game look more up to date.

GoldSource mods that do not use fancy new rendering techniques, such as "Residual Life" or "Hazardous Materials" and the old classics like "Life's End" and "They Hunger" will still work if you install them normally. (Bear in mind that your Half-Life directory will have been moved to your steamapps/common/ folder rather than steamapps/username so you just need to put the mod folders in their from now on)

I'm not sure if there is an issue with the way Desura now handles GoldSource mods, since I do not use it, but every mod I download works without any issues and The Core is the same. We are still powering through with the development, totally unhindered by whatever issues appear to be plaguing a large number of other users on the site.

On that note, here is a new screenshot of the security guard model for the mod, now finally tweaked to a point where I am happy with it. 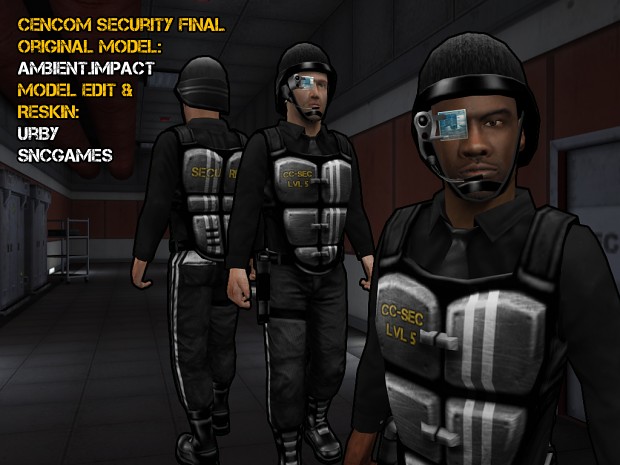 Thanks, I had a sneaky feeling that this "OMG! HALF LIFE MODES ARE BROKE!" was a big out of proportion thing.

yea, im sure rumpel is screaming it louder than anyone because of fear of cry

My half life never got the update so all mods work for me, yes it is a legal steam copy.

If you run the game it will update.

Or you've set the game to 'manual update' in the properties.

Mhm, that's what its set at.

Actually during the first few patches a lot of stuff was insanely broken except for simple map packs or those with minor code edits. They've fixed most of that stuff over the past few months as I discovered some mods started working again.

Some of them still have bugs but if you launch the mod with -nofbo you usually get rid of most bugs. Though, some mods are simply left broken forever considering the developers or at least coders vanished a long time ago.

^This. The patch did break a lot of things, Old-school counter-strike being the one most stirring up the most net-rage.
It's not that it was exagerated out of proportion, it was just quickly fixed in most cases. Mods with more advanced modifications were just slower to be completely straightened out, and not every user experienced the same bugs.
Cry of Fear still isn't completely fixed through the valve patches, but that will be fixed once the indie version is released.

A true word! You say what everyone knew but not dared to say!

For the record, I'm not saying that there haven't been problems. I'm simply trying to get the message out to those who assume Gold source modding has been totally ruled out.

HL mods where broken when the patch was released, even when you placed the mods into the common folder the mods would all either crash & a few that did work had mouse issues. That has since been fixed, so no there is no "blowing out of proportion", now the only mods not working are those not in the common folder or a select few probably the ones that fiddle with the engine & they are now ruined.
Luckily I had a WON copy I dusted off.

Valve ****** up. It's nice to see some weren't affected but your denying that it ever happened as a matter of fact.
Yes HL will endure and all that, but it's yet another reason not to use steam.

You're gonna have to use it if you wanna play The Core.

Well, I've been able to avoid this whole Steam Half-Life mess thankfully thanks to WON2. However, I do worry about Overturn multiplayer over Steam for those who don't use WON2.

I tested my installed mods myself when everybody was freaking out saying "OMG VALVE BROKE THE MODS!" I did not have any problems with them at all, even with "Cry of Fear," where I saw the first posts about that Linux update.

you must have did so late, confused the dates.