We are proud to announce the release of Beta 2.0.0 of Half-Life 2: Wars! It is our first public beta release in nearly two years and introduces a slew of new features and improvements to the mod. HL2 Wars now runs entirely on the Alien Swarm version of the Source engine, meaning it only requires Alien Swarm installed to play (although you MUST legally own Episode 2 in order to play this mod). Beta 2.0 also features a completely redesigned HUD, new building models, new maps, and more variety of units, buildings and abilities than ever before!

Beta 2 is the first major release of the mod that has all of the core multiplayer gameplay fully implemented, so if you haven’t played in a while now is a great time to check it out again. Download Half-Life 2: Wars from Desura now and read on to learn more about what Beta 2 has to offer. 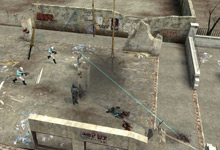 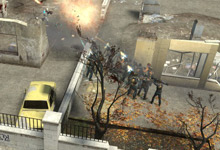 The screenshots above are of hlw_slums, a new map created for Beta 2 by Arietta, the latest addition to our team. Slums is a 1v1 map set in a sprawling urban environment with lots of ruins and cover and paths which makes for a lot of interesting tactical options. It is designed for the primary game mode of HL2 Wars, called Annihilation. He also created the other new map in Beta 2, called hlw_synth, which has a very Alien Swarm feel, taking place in a snowy Arctic installation. Up to four players can duke it out in a free-for-all or team game on Synth. You can see a screenshot of the map below. In addition to the new maps, some older maps have been updated to include support for more game modes.

You can also see from some of our previously released screenshots that we have a brand new HUD and interface. This isn’t news to anybody who has been following our progress over the years, but now it’s ready for public consumption! We have finally gotten rid of our placeholder building models and have full sets of Resistance and Combine structures along with full unit, upgrade, and ability tech trees to go with it. Many units that were not previously playable in multiplayer Half-Life 2: Wars are now fully implemented including Striders, Hunters, and Vortigaunts as well as all the old favorites.

The mod now runs entirely on the Alien Swarm version of the Source engine, meaning you only need Alien Swarm installed to play. However, the game uses HL2: Episode Two content so you must legally own that in order to play HL2 Wars.

Half-Life 2 Wars is only available for download through Desura, a free digital distribution client made for mods and indie games. This is for our convenience as developers - we can easily disseminate updates through Desura rather than having to manually create and distribute patches and client files. You must have Desura installed ONLY to download and patch the mod, but not to play - it will show up in your Steam library as usual. You do NOT need to have Desura running in order to play.

You must have Alien Swarm installed to play. Visit our website or the help page in-game for more information. Also please remember this is still a beta release and we expect players to encounter a lot of bugs that we have not found yet, especially since our playtesting time has been sorely limited in recent months. Please report bugs, gameplay feedback and balancing suggestions to our community forums to let us know what you think and so that we can fix them in future releases!

We expect to release the first patch (Beta 2.0.1) within a few weeks to address any bugs or balancing issues that are discovered in that time.

Thanks but no thanks, having one gaming client is enough, I don't need another one.

You only have to use the client for installation and patches. It doesn't need to run in order for you to play the game. It uses your ModDB account as it is run and developed by the same group of people. If you're so inclined you can add the game to your Steam library and launch it from there. Desura is less obtrusive then Steam as it doesn't require any background process or services to be active for you to play your games. So i'm not sure what your issue is with using a great service that comes in at about a whopping 35MB or so installation.

This, personally i dont mind installing desura 1 time, then not having to worry about anything else that evolves mod installation
the mod is 876MB in size btw.

I should add that Desura was developed to know the default directory that mods should be installed to, so for Source mods, Desura will install the mod to the correct path by default and the game will show up the next time you start Steam. If your Steam directory is in a different path you can choose to install it there. So you don't even have to bother adding the game manually to Steam like I mentioned above.

So if someone were to just take the mod after it installs to the sourcemod folder, repackage it in a zip file then distribute it, would you A) try to prevent them from distributing it, or B) Provide the damn file yourself rather than looking like fools?

Our issue is at having to install YET ANOTHER client.

Agreed. One game client is enough. Never the less good luck with your project. And try the Steam green light thing. I would gladly vote for it.

I'd rather not play this marvelous mod than download another ****** distribution software.

Do you guys intend to release this mod on Steam through Steam Greenlight?
That way you could release patches and updates more easily and maybe even add achievements. There are a few mods out there that are already on the list waiting to be released. Not a huge fan of Desura but thanks a lot for all the hard work!

We first want to fix the bugs in the coming updates and improve the balance of the game (feedback!). Then see if it is actually worth to put on greenlight and see if there is enough interest. I think we also need to change the name of the mod in case we put it on GreenLight.

you sons of modders , i was about to go to sleep

oh man, they're good at this

I prefer playing on steam though.

if this is alien swarm mod...y is it listed as halflife mod?

Because you are legally required to own half life 2 episode 2. And it originally was for that game so...

Regarding Desure, the mod will still show up on steam as usual.

to bad can't use all buildings in overrun.

bug report, infected are errors (al tleast for me) and fast zombies have large chance to spawn under maps.

Seems I forgot to remove the infected option, should actually only be shown if Left 4 Dead is mounted.

Yes, but it does not mount the game by default (controlled in mountlist.txt).

you gonna lose some players for not releasing it for steam like usual (.zip, or .exe)...

It is released for Steam and you do not need to run Desura to play the mod, only for installation.

I will also upload a zip to ModDB, but I don't really want to bother creating an installer while we already have Desura.

I tend to prefer zips over exe or client, due to the problems of bad ones putting files and folders I didn't want all over the place.

*Dies from shock and amazement*

Desura is so slow.

How about i wait for it to not be on desura.

We released a zip for it to. You can download it from moddb.

Why so much Desura hating ? Now Desura's speed is fine and once the mod or indie is installed you can quit it and be back on Steam !

They are trying to give you a smart way to update your stuff and you don't like it... Not all mods will be on Greenlight and look at the time it takes.
Ungrateful people are ungrateful.

can you assume direct control of a soldier like in men of war?

It does have a short recharge/cooldown time. So it's either that or a bug/unexpected behavior.

Another bug: I cannot play Overrun for rebels, though I'm able to choose Combine as enemies))

Strangely...when I changed the color of the team to green (from red) it worked)))

I can't seem to reproduce this.

For the better) this release made my day (evening at least :)))
You HL2W team could have rightfully taken the name Electronic Arts if it had been free)))

this mod will be the only reason im using desura

GO TO GREENLIGHT!
Thumbs Up!

Why do we need to have Episode 2. And while I'm generally against piracy, why specifically "legally". This just gets posted without explanation.

Also, are there finally more than roughly 2-5 units per side now? And more than two buildings per side? Last time I played the mod, you could only play as antlions and your abilities as a commander were significantly limited.

Refer to the news update for the new features.

But I'd also have to agree with the previous comments, why can't it be added on Steam or even here instead of Desura?

Oh and I forgot to mention, I crash whenever I tried to launch the mod from Desura :/

Nevermind, it automatically fixed itself. I've played it for a bit, and tried out the survival mode (I think that's what it's named) then selected infected, but all I saw were errors rushing towards my group :/

I think a moddb download link is awaiting verification, not sure though.
The infected are being shown as errors because the l4d package isn't mounted. This will be fixed in the next patch.

Desura is only used as a platform to automatically update the mod. The mod is still on steam and launched from steam.

We have released a zip file for those people who really really really don't want to install Desura, but having Desura will be easier to update the mod in the future