Today we're able to present you a real blue-blooded character: PadKing. Well known from the statue in the backyard of ENTE's PadCastle map, it comes alive now as a new character model in WoP 2.0. 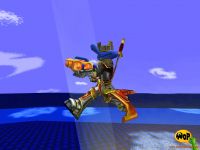 PadKing is the first Pad character which was not contrived by ENTE. Instead, this very detailed model was designed, created and animated by doomdragon. Since that wasn't enough yet, he also took care of the skins. Although, being a king he should be sending his troops into battle, PadKing likes to grab some brightly-coloured weapons himself. But not exclusively those, since he is carrying an impressive sword of his own on his back, which he doesn't really use in combat of course and just shows of as a status symbol. A sword is also a perfect fit for a knight, and since the model already shares many similarities with such a warrior, doomdragon quickly realized that a new head-model can easily turn PadKing into PadKnight. With an additional head-model you'll actually get 1 1/2 new models waiting for you to put them into battle.
Download the video! | Visit WoP video gallery!
Comments