Some days ago, Six Sides of the World was finally greenlighted. This is a post about the overall game progress since the las update on June 2014

We are glad to announce that Six Sides of the World, after ten months on Greenlight has just been approved some days ago.

Since the last update we have been working on the creation of new levels, and the latest gameplay elements, now reaching about fours hours of gameplay, reaching also the half of the final level count, but that was three months ago. One of the latest additions was the water manipulator, that can be used to make more interesting and deadly puzzles! 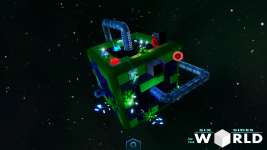 After that we took a break and give a look backward to fix some bugs and concepts, and also remake some of the first levels, refining puzzles and removing unnecessary content. We also redesigned the "black and white" world gameplay, creating a new variation of the core gameplay and redesigning the levels we already builded. 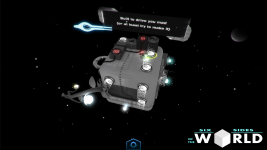 We also improved some graphics, and the planetary system inhabited by a black hole was redesigned, taking direct inspiration from Interstellar. That black hole rocks! 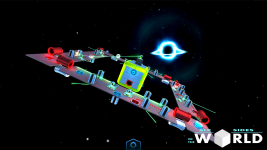 We drove some playtests, and also added a feature requested by nearly all of our testers: A fast restart feature. Before this feature, all the levels were fully reloaded, taking about ten seconds to restart, making the game too slow on difficult levels, when the player can be killed lot of times. Now, after the implementation, it takes less than two seconds to continue playing! We are proud of this and we hope players would appreciate it.

What's going on now? We are creating the remaining levels and we are planing to launch on first half of 2015. Didn't now the exact date because we are working on our spare time, but we're sure the game will be launched before July (or at least, that's what we expect).

Thanks to all of you who voted on greenlight for your support!