Captain Morgan's story is continued! In this episode Big Daddy is to suffer an unhealthy fate when their little pirate fleet is ambushed by some Keeper AIs and we learn why kicking ancient artefacts can be a good idea from time to time... or not?

Captain Morgan's journey from the Black Sea where he'd come across Big Daddy had not exactly been uneventful. For one there was a pesky Hiigaran Destroyer group that seemed intent on killing him. Eventually he'd had to hire some of the old Imperial mercs to solve the problem once and for all.

The Imperials didn't come cheap at that and he wasn't... exactly... in the position to pay them... quite yet. Thankfully he knew where he could get the funds to pay them with. The place was really just known as 'The Graveyard'.

Given the nature of the place, The Graveyard was ideal for hiding valuables in. Many Turanic Clans resorted to storing valuable possessions they owned there. Usually the strong radiation that filled the graveyard made finding stashes you hadn't planted yourself virtually impossible. The same seemed to still hold true but Morgan had an ace up his sleeve.

Mouths loosened quickly when you knew how to make them talk and after sharing more ale than he'd care to think of with many a pirate (and by sharing of course was meant that he did not ever get to take a sip) Morgan had come to know the location of several prominent stashes within the Graveyard.

Sadly, times had changed slightly since he'd last been there... 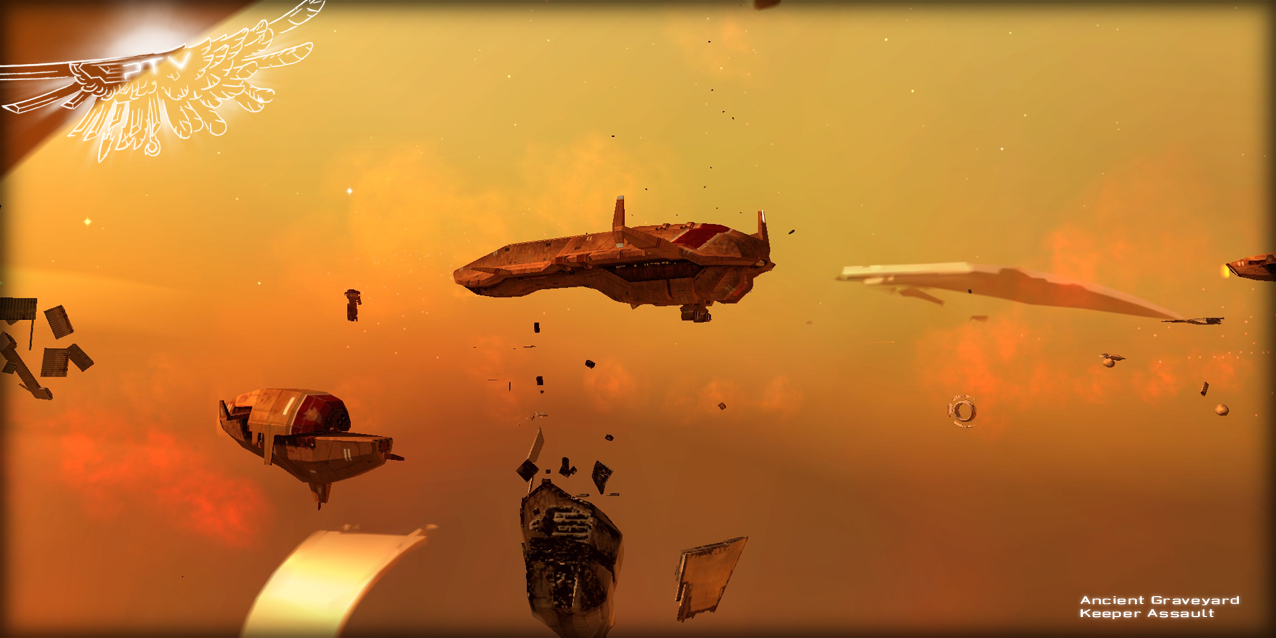 The old masters of the Graveyard seemed to have returned and didn't really seem very at ease with Captain Morgan poking around in their ancient space junk. Only moments after hyperspacing into the Graveyard several Keeper ships powered up. Big Daddy's comment on the situation really summed it up fairly well:

Morgan quickly gave the order to hyperspace out however it seemed the Graveyard's Masters were a little ahead of him. The Turanic hyperdrives refused to engage - in the case of his own ship even giving up entirely with a heartless screeching sound that filled the entire ship. Sitting in the sudden darkness of an unpowered ship and wondering what to do next, Morgan heard Daddy say:

Big daddy was interrupted by the screaming noise of his carriers defense guns thundering to life. Looked like the boys had got the message.

The keepers returned the favor, their ancient, rusting ships opening up with a withering barrage of plasma rounds, Ion Cannons and other assorted weapons. 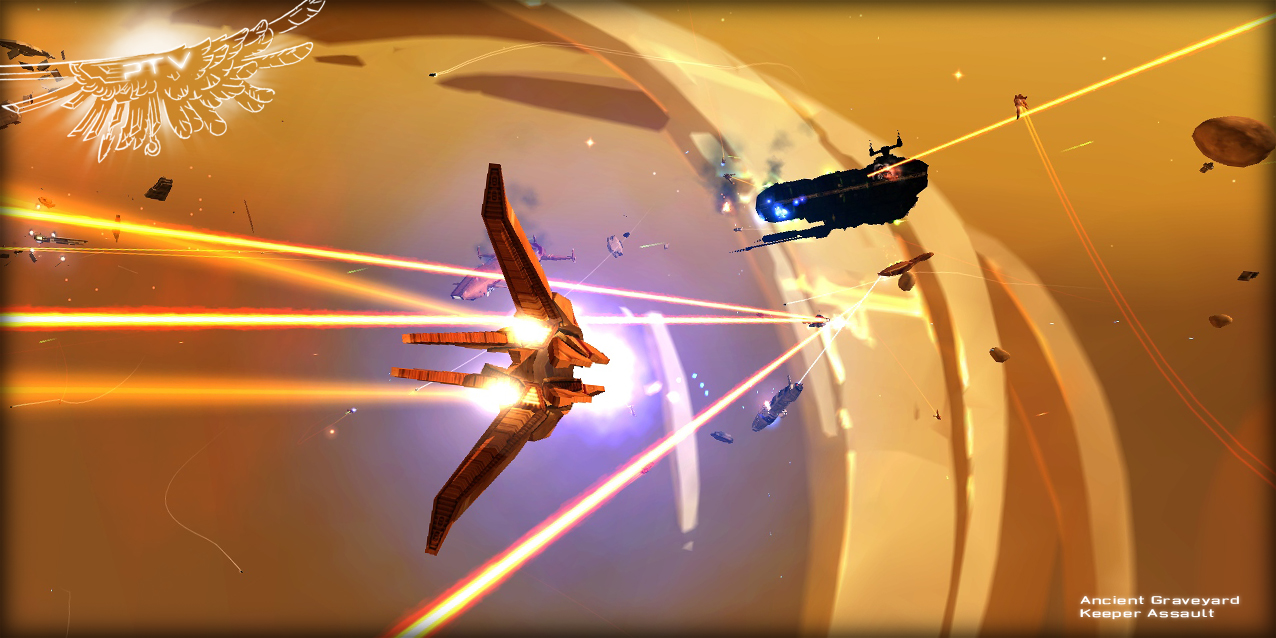 Even Master Oreman and his mobile refinery were not spared from the onslaught of AI drones. Old as the Keeper tech might be, it certainly worked a damn lot better than the clunky tech Morgan and his fleet were using. 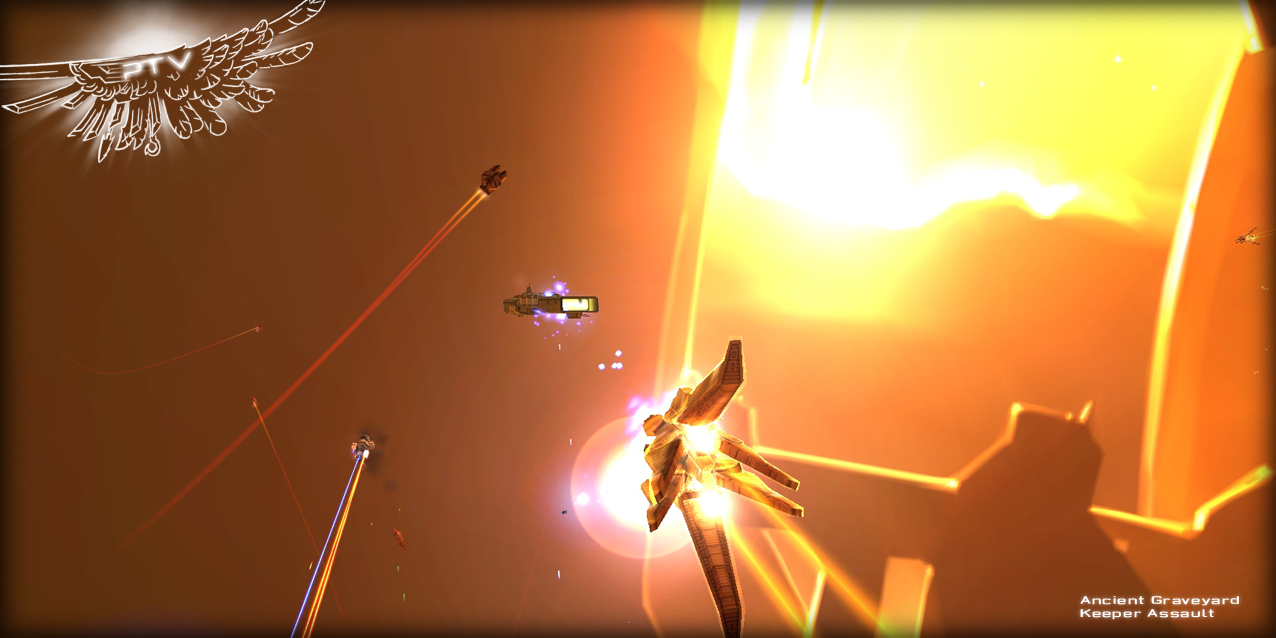 It quickly became clear the Keeper Assault had only one goal: Kill every living being around. With that realization kicking in the Taiidan Mercs who were still tagging along, waiting more or less impatiently for their pay, decided it would be a good idea to join in. After all, no one was gonna get paid if they were all dead!

With the Imperial firepower joining in the battle was a wee bit more even though Captain Morgan still knew nothing of this, sitting in the dark, arguing with his mechanics about how in the name of New Turan they were going to get the pile of junk powered again. 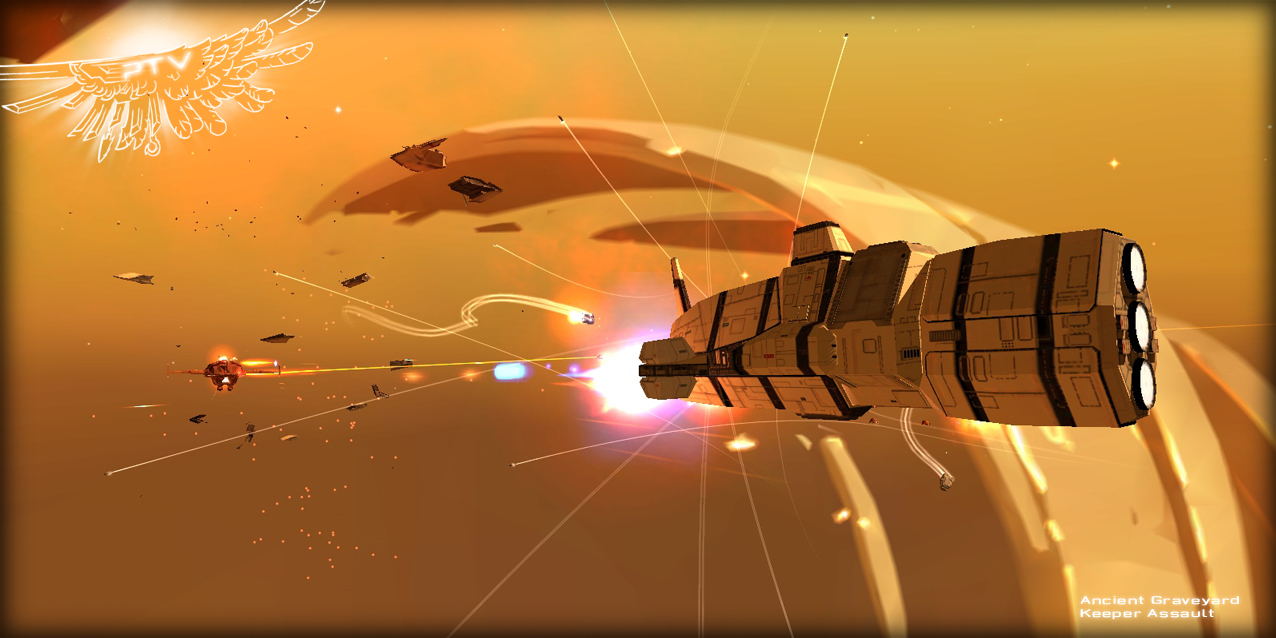 Even the Taiidan Quaar-Tel Cruiser Vanity's End pitched in to the battle. Modified by the mercs, the Vanity's End was all very welcome as it was really the only ship in the fleet capable of scratching the Keeper Sentient's hulls. 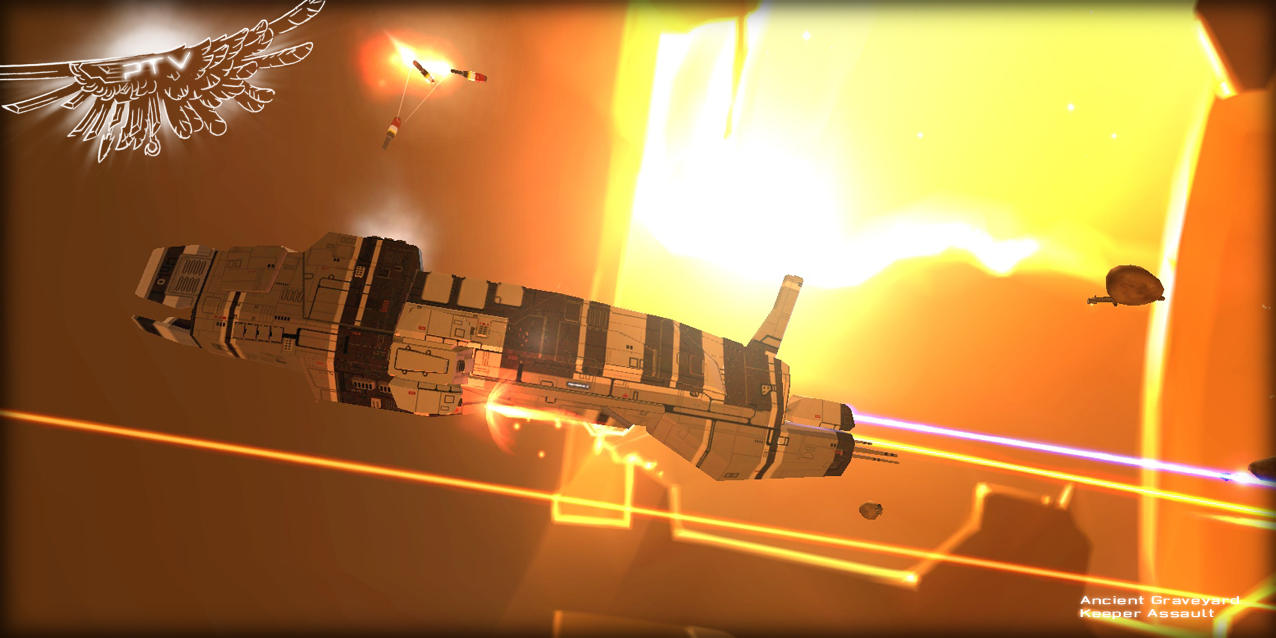 Advanced weapons and all, fighting the Keepers was not an easy task. Even when outnumbered five to one they put up a fight like no one else in the Galaxy. And once thief phase shields kicked in they were virtually immortal AI badasses that really didn't care who you were. They just wanted to kill you... 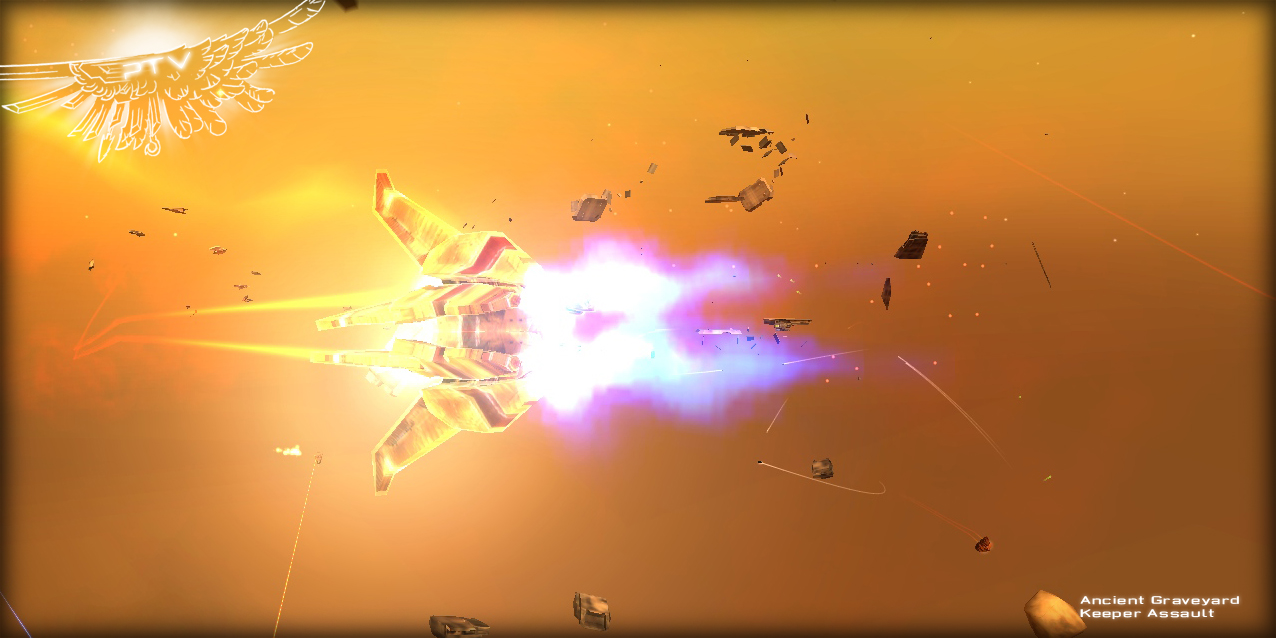 Morgan and his crew had finally decided on how to fix their engine problem however they were rudely interrupted by a panicked gunner shouting down to them:

"They're towing us away! I can't shoot the bastard!"

Morgan didn't believe the man for a second. It was only when he returned to the bridge - only to find his view obscured by an AI vessel which had latched onto them with some form or magnetic grappling system...

The battle slowly disappeared around them as they were towed off into the middle of nowhere. Cursing, Morgan ordered them to shoot the thing off his ship... and then realized they couldn't! Not without power... damnit!

So, this was the way he was going to end?! Towed off into the void by an AI ship, helpless to defend himself because his ship's main reactor had given out? Bloody epic way to go out if you asked him! 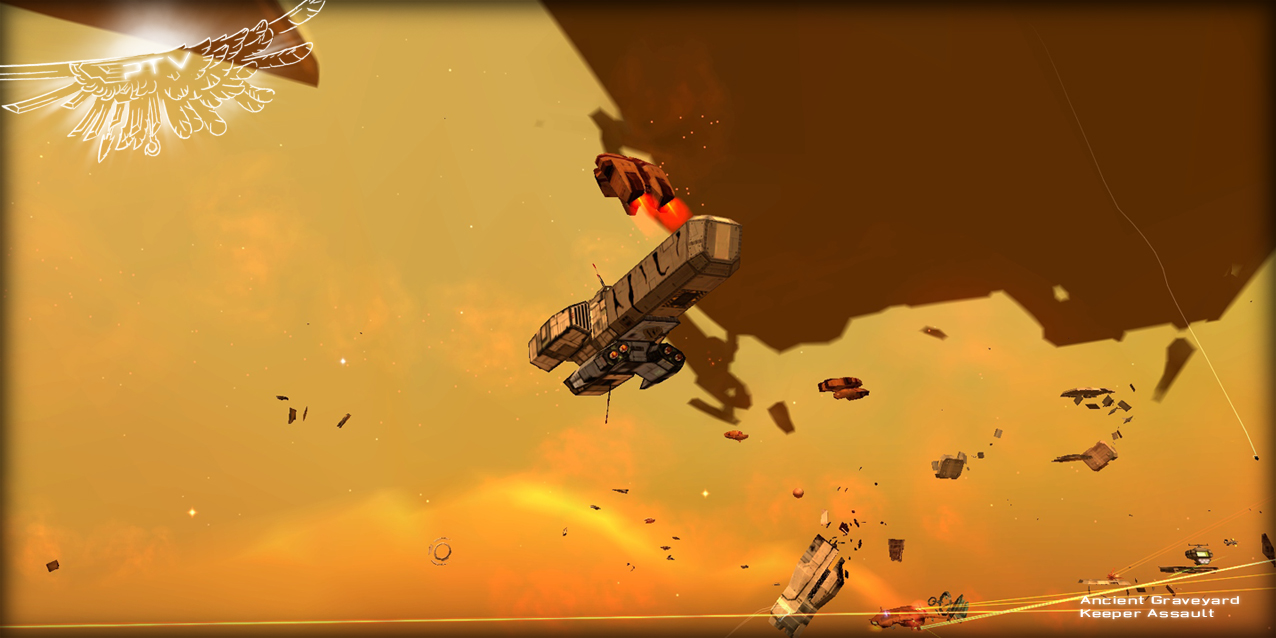 Big Daddy - as the fleet's only remaining carrier - did his best to stay alive. However things were not looking up. Under fire from multiple sides, the anient Lord Carrier wasn't going to hold together forever. As the fight raged on it became clear that no one but the Keepers were going to leave this battle alive.

One by one the Imperial and Pirate ships went down until only Big Daddy was left, holding out valiantly against the AI onslaught. But he would not last forever.

With all escape cut off by the Keeper's hyperspace inhibitors Big Daddy eventually had to accept that this was going to be a fight to the death - his death - and a spectacular one it was going to be at that! There could be no better way to go... 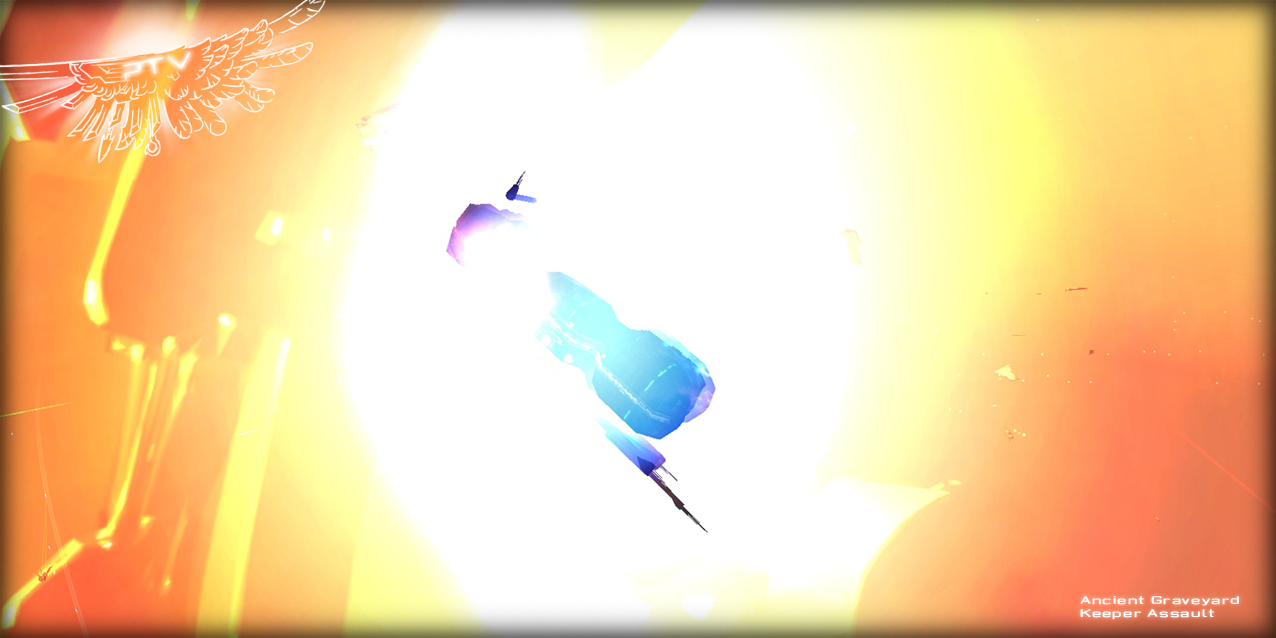 With that last ship gone, Morgan's fleet lay in shattered ruins, scattered throughout the graveyard by the the Keeper's ancient weapons systems and the lack of gravity in space. It would be the fate of many a trusty bandit to end up slowly drifting off into infinity. There was but one exception: Our hero, CAPTAIN MORGAN!

However his fate wasn't much better. He was still stuck in the middle of nowhere with a Keeper Mover glued to his Outlaw. Engine repairs weren't going well. The entire system was burned out. In fact, they weren't getting anywhere!

In frustration, Captain Morgan kicked the damned alien artifact he kept lying around in the engine room. As if that thing was the cause of any of his troubles. All it did was sit there and glow in a faint green light. The damned thing was quite and utterly worthless! Quite before Morgan even realized something was off there was a howling sound and a brilliant flash of white light.

Morgan looked around, confused. The mechanics did the same. All the sudden the Outlaw's engines thundered back into life and there was a cheer. Morgan was dumbfounded. What in the wild world of Turan?!

It was only when one of his men shouted down from the bridge that he realized they were in very intense trouble:

"Captn' worlds gon white! And there black intereceptors all round us! Look like Daddy's boys!"

Of course, he was quite sure that Big Daddy had been shot to bits a little over an hour ago. There was no way... simply no way... any of this was real. He had to be dreaming! Yeah, that was the only real explanation! 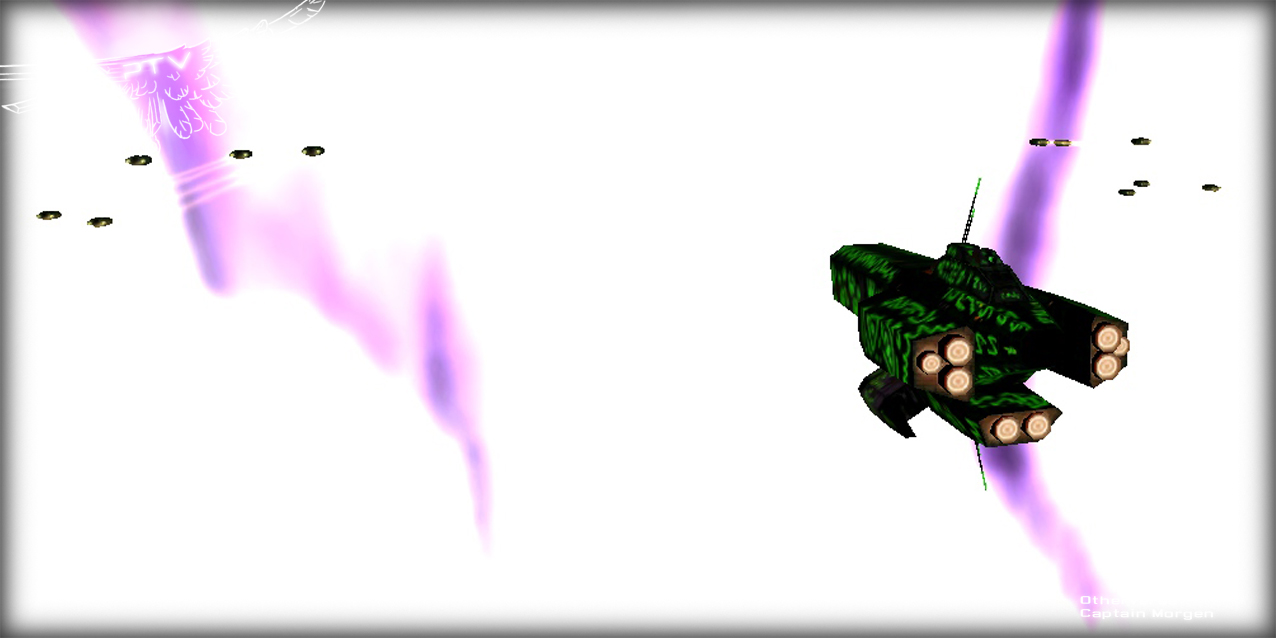 awesome.
that last thing is the John Lennon last dream?or is the pink floyd dimension that is were the infinite makkans are?(because:guy,how many time we kill him?)

Pro Tip Capn' Morgan, blackmarket armor plates and a few thieves on every keeper cap on the field.

If you really intend to have a white background multiplayer map, I'm going to punch you. What a huge strain on the eyes.

we still have the pink details........I know,this don't help........anyway,blue should be cool in this map(or switch the white for gray,or the switch the pink for blue)but the map sill awesome.

just to defend myself:this don't mean that i love pink or something,just that the white&pink map is very psychedelic.

The white and pink is really just for fun. The map will be available but not designed for serious play - more for the psycho effect. It looks very... disturbing... ingame.

Back to teh future! bamflashofwhite