Residue's Graphics duo blogs about creating graphics based on a real world setting, and how you can use modern tool like Google Earth to discover more exciting things about the area you're researching!

A virtual flight over the Aral Sea
Since the Aral Sea is a real place, situated between the nations of Uzbekistan and Kazakhstan, there was a lot of pictures and information about the area available for us when we started our graphical research, roughly three years ago today(ish). Early in development, we decided that Residue would take place somewhere in the Aral sea, but we also decided that it wouldn't necessarily have to be in a specific place within the area, for example close to the fishing town Moynaq, or on the Kazakhstan side of the lake, or closer to Vozrozhdeniya. The setting for the game would be in the Aral sea, but exactly where would remain unknown.
However, although we didn't pick an exact location for the game at first, we thought it important to be able to represent reality in some way in the game, and since the Aral Sea is such a memorable area, with its distinctive white desert and all those rusty old ships scattered here and there, we started looking for reference pictures and info about the area that might be connected to the game in some way (Vozrozhdeniya, Moynaq, and so forth). We didn't have to look for it long, as it turned out, for even though Uzbekistan is ranked high on the ”never go to this country on vacation”-list a lot of people have been there and they've taken plenty of photos of the cities, the rural areas, and the remains of the Aral Sea itself.

We used many of these references to just get a good idea about the area, how the culture looks, what the weather's like; stuff like that. But most useful of all were all the photos of the hundreds of wrecks that can be found everywhere from north to south in the Aral Sea. Since Residue is a game we sometimes had to design stuff to work with the gameplay and the progression, and therefore some of the ships in Residue is designed from scratch by us, based on the ”feel” and technological level of the original wrecks. However, in some cases, like the ones pictured below, a ship in Residue can be entirely based on a ship from real life. I think roughly 1/3 of the ships in Residue are more or less exact copies of real life wrecks, even with the same graffiti (here's hoping some of the Russian I've copied isn't profanity!). If you play the game/demo, and go to Flickr and search for ”Aral Sea Wrecks”, we're sure you'll find a lot of familiar rusty old wrecks in some of the pictures.

Here are two pictures of ships based on real world counterparts: 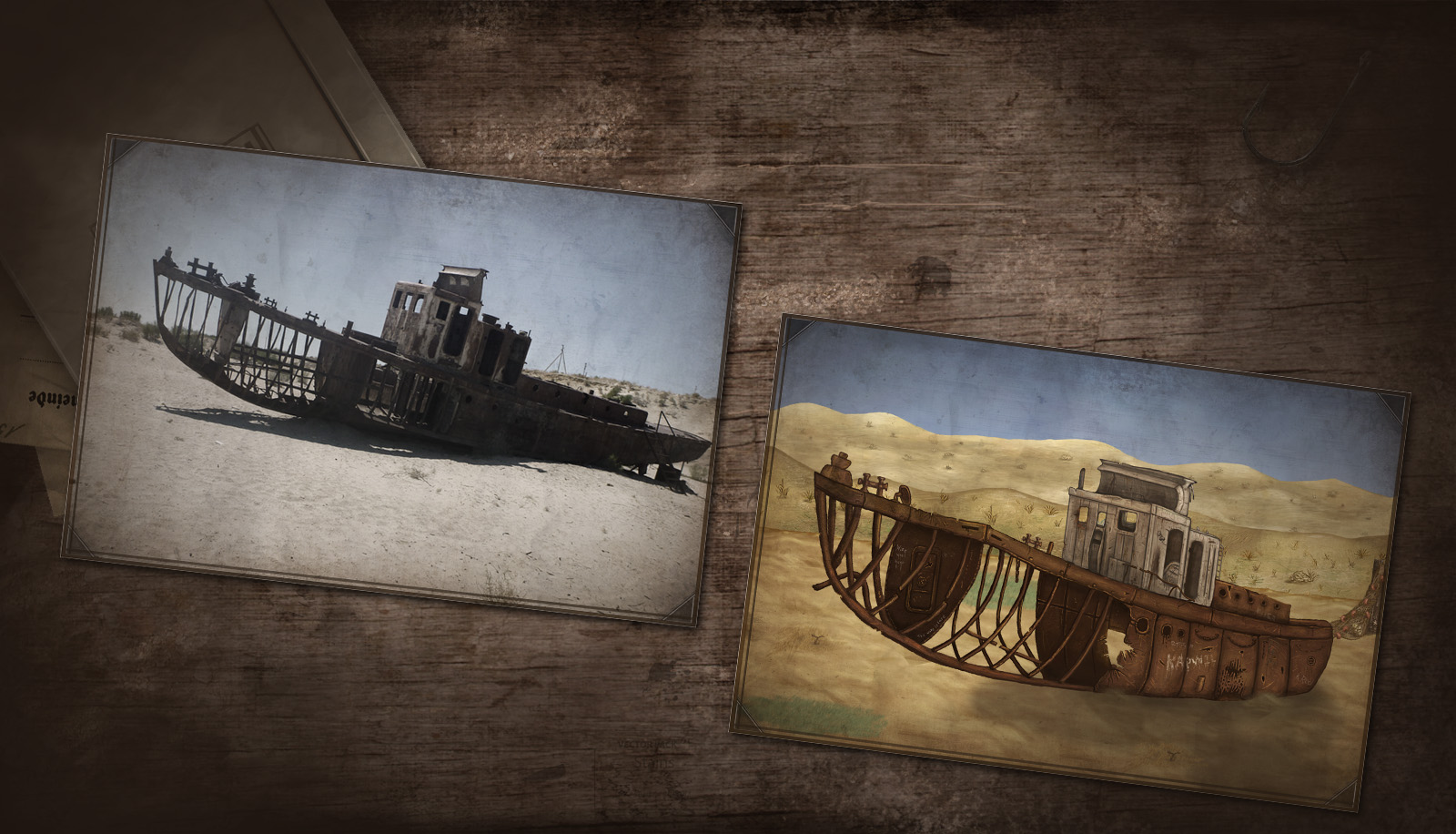 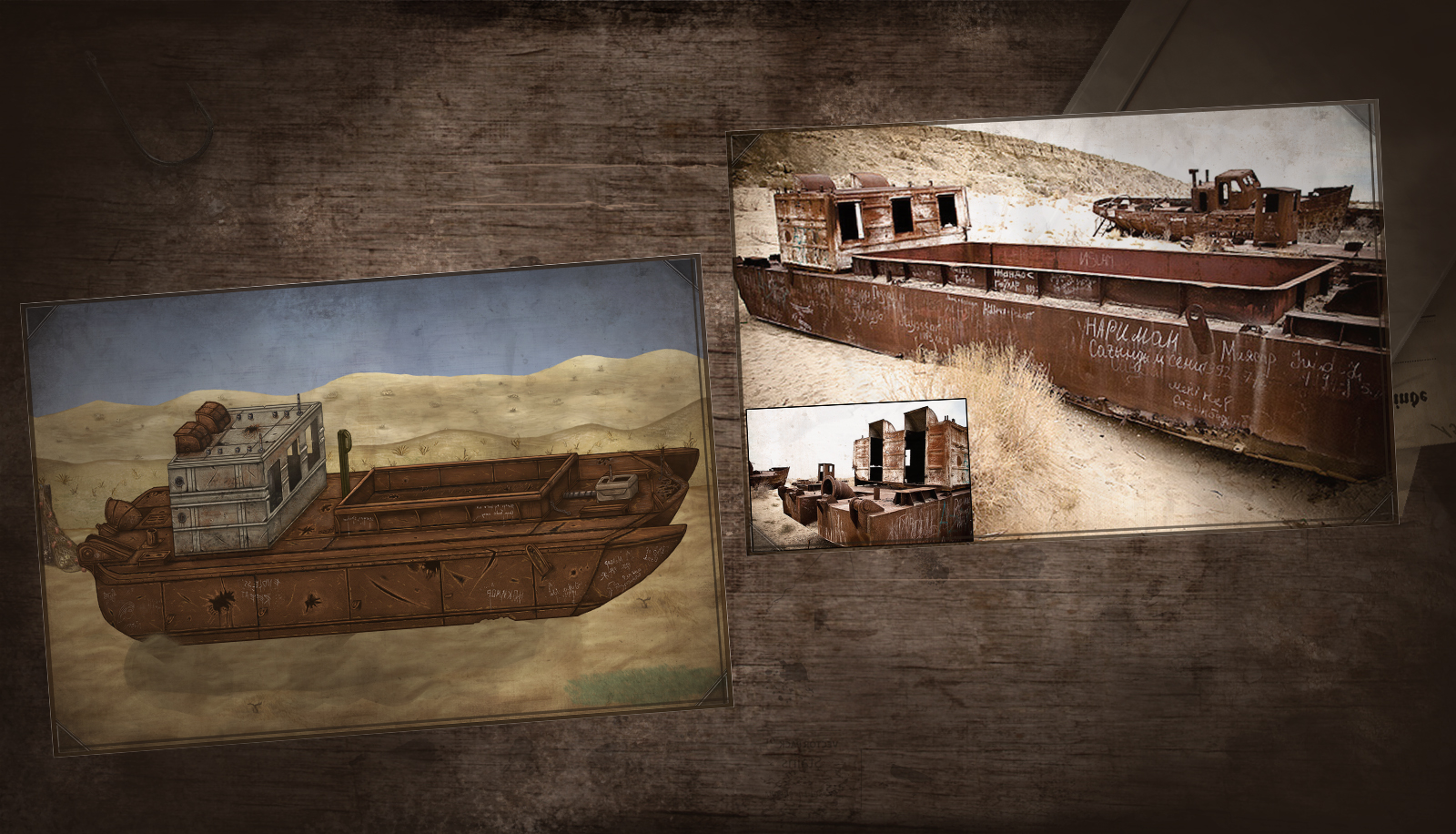 Also, if you want to go for a trip via Google Maps, we recommend that you check out the following coordinates:
Maps.google.se
Some ships just to the east of Moynaq, you can see at least a dozen of them just via this link.

Maps.google.se
Three more from the north side.
Maps.google.se
Two really old, and really big ones near the city of Aralsk.
If you fly around the Aral Sea yourself, you'll find many like this one. It's a pretty big area, so searching might take some time; you'll see a lot of sand and bushes but, every time you find a wreck, you'll feel like you're five years old and on an adventure again. I did one of those discoveries myself, while flying around the abandoned island Vozrozhdeniya, and the ghost city of Kantubek.
Maps.google.com
Just south of the city, I found this ship, a big rusty thing; about 100 feet long at least. It's special, since there are no other ships close by, and since it's a lot bigger then your average Aral Sea wreck. We therefore decided that, if Residue is supposed to take place at a specific location in the Aral Sea, this is where it'll be, and this big wreck will be the drillship that a large portion of the game takes place in.
Also, Kantubek is a really cool place, once a weapons research facility, the city's now abandoned. If you check it out from the air:
Maps.google.com

You can see all kinds of cool stuff, like the abandoned airfield to the west. We really recommend you take a tour of the Aral Sea via Google maps, you never know what you'll find out there! If you find something really cool be sure to post a link in the comments!
//Magnus & Viktor Nyström. Residue Graphics-patrol

Awesome man! I have a huge interest in shipwrecks.

Thanks! Then this is indeed the game for you xD
We've really focused on that adeventurous feeling of discovering what remains of something old and abandoned. : D

Please suppor the game over att Steam's Greenlight if you like what you see! : D
Steamcommunity.com

Glad you think so! Please support the game over at Sream's Greenlight (https://steamcommunity.com/sharedfiles/filedetails/?id=92921269) if you want to :D

Did you find any other cool wrecks out there+? :)