After three years of development and multiple iterations of our game Goggles we wanted to show the different stages of Goggles and how it came to be.

We started to work on Goggles in late 2012. Back than the game was called Glasses and was supposed to be a simple endless runner for mobile devices.

The simple idea behind the runner was that our main character was wearing glasses that would change the world around him by wearing them or taking them back off. Below you can see two concepts from the same world, with and without glasses. When we started out, our team consisted out of three people, two coders and one artist that all had never worked on a game before. So we had quite some time figuring things out and had a lot to learn (which we still have) and made our first steps to a playable character.

Below you can see the different steps the character took to his final result: 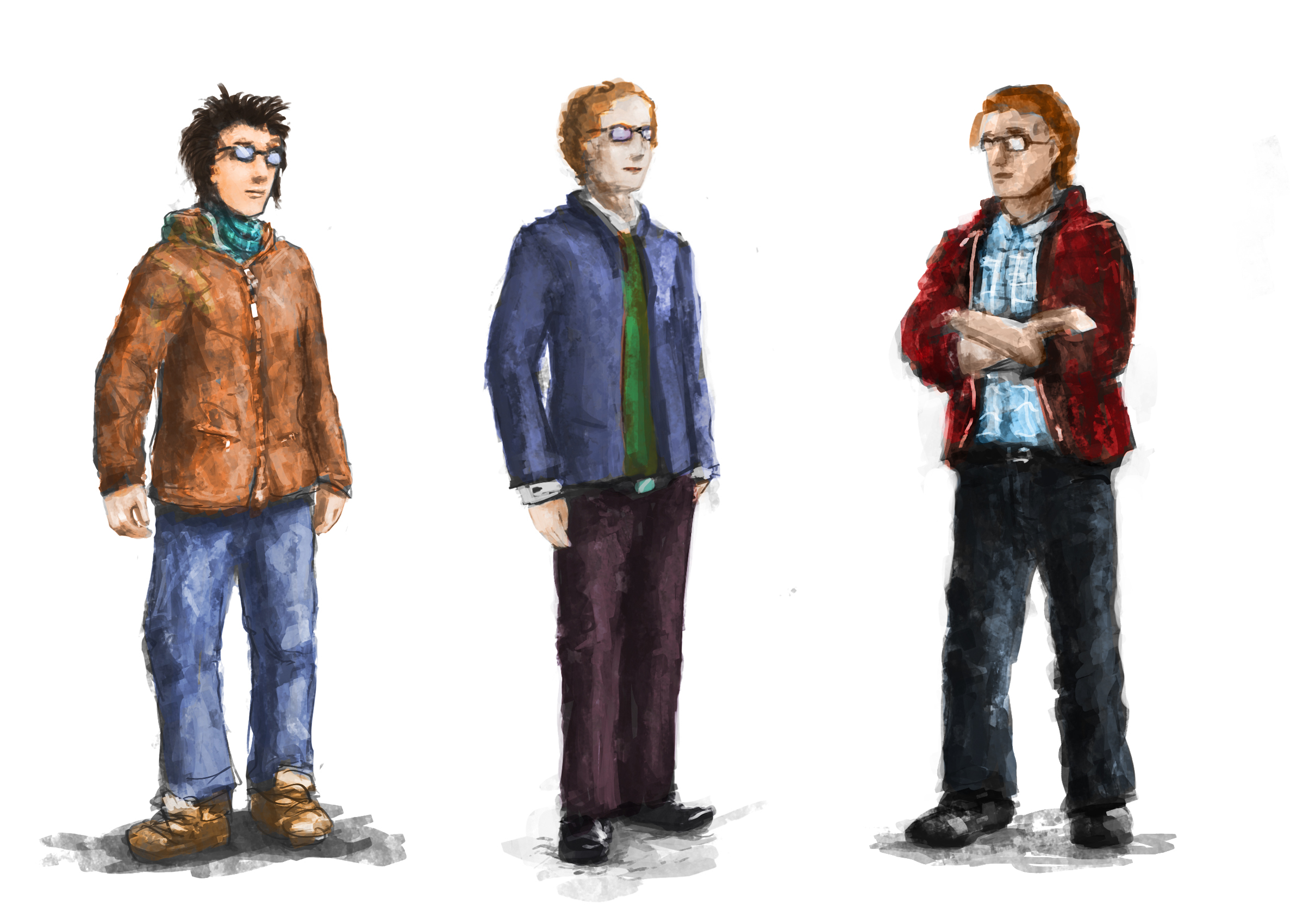 First concepts of our character Quentin 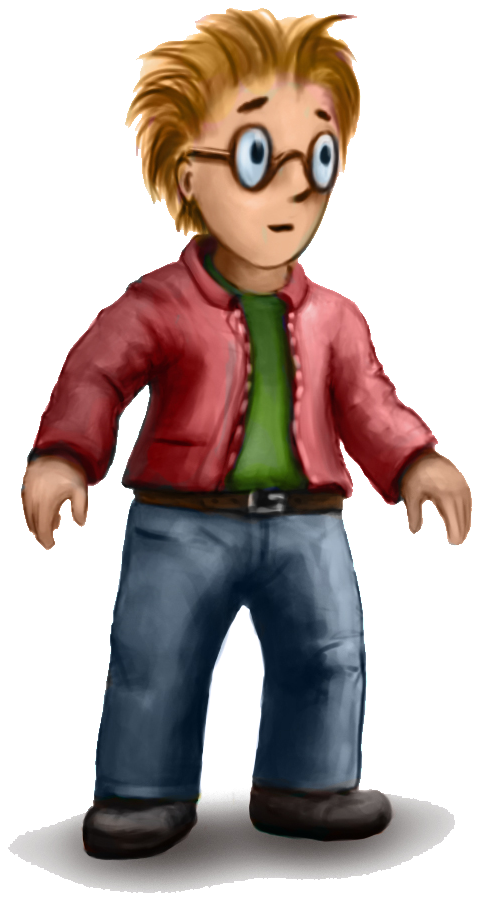 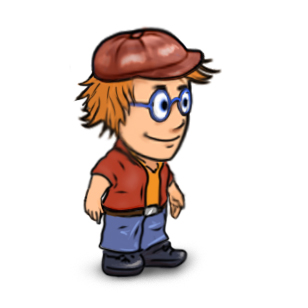 We liked that so Quentin became totally cartoony and we settled on that style.

Yay for the first concept where we put everything together!

so Glasses was our first strike and we handled the endless running part quite well. Of course it was buggy as hell and we still hadn't figured everything out regarding the level generation, but still it was quite something... Until it hit the first players.

The feedback we got was bad. And i mean really baaaad. The game just wasn't fun. People kinda liked the running part. But we heard one question over and over (which we didn't expect at all):

Why can't i move to the sides ?

Well we thought about that and how we could change the character so it made sense. Our answer was to place Quentin in a wheelchair that was going fast and only in one direction. To make it more interesting we wanted to make the wheelchair upgradeable and so we came to the solution to make Glasses a steampunk runner with a wicked wheelchair you can upgrade.

So we started again. (With all our mighty one year knowledge) we started to work on Glasses version 2.

First we created the new main gameplay element, Quentins wheelchair that we baptized S.E.W.D. (Steam Enhanced Wheelchair Device). Here you can see the concepts for Quentins S.E.W.D. as well as some more advanced versions of it in the later lifespan of Glasses: 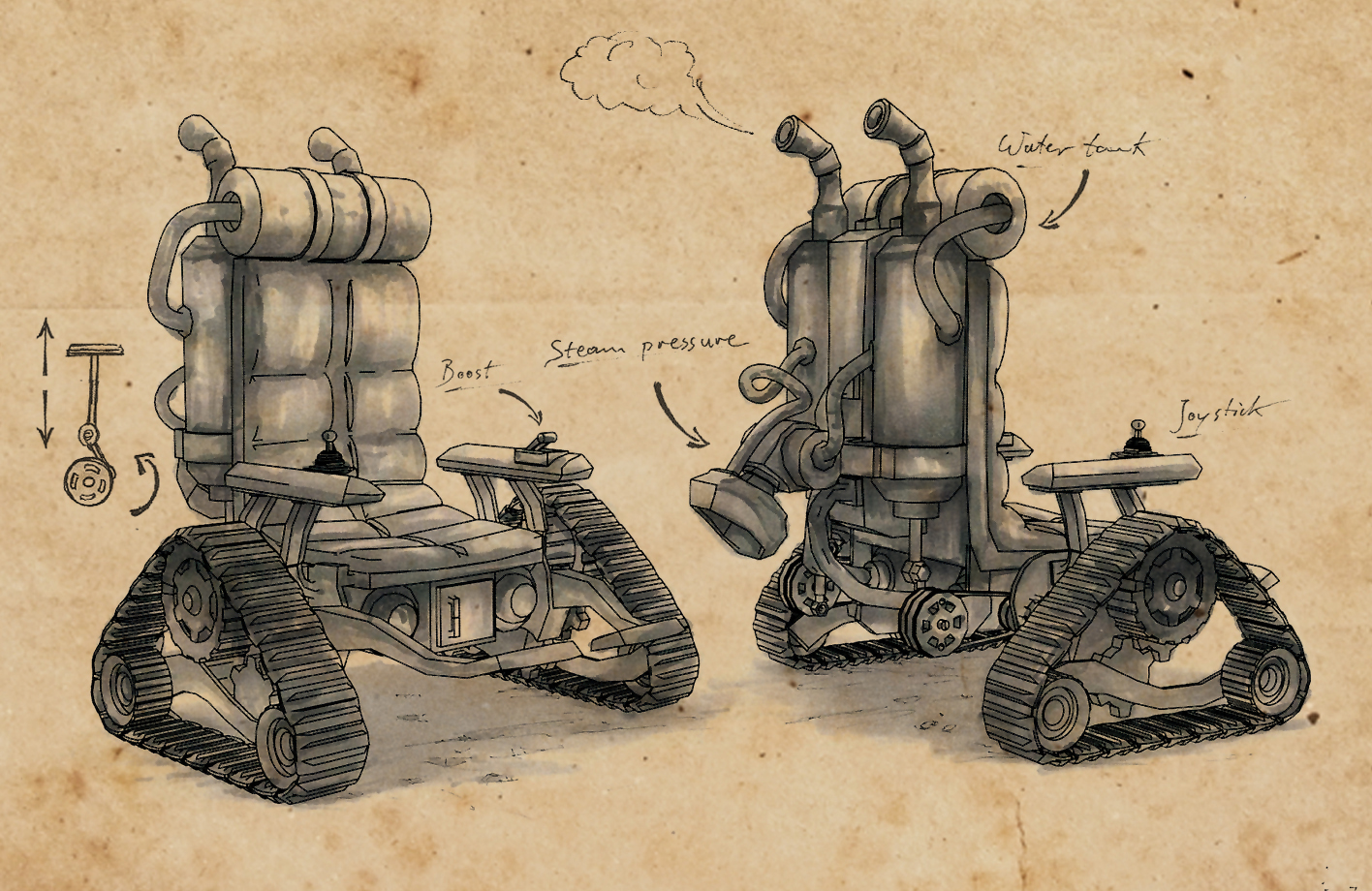 Later versions of different S.E.W.D. we made.

Quentin also made quite the transformation to his new steampunky self, but even more important he wasn't alone in the universe of Glasses anymore. Since we wanted to make the S.E.W.D. upgradeable, we needed some character to sell Quentin all those upgrades and keep the workshop open. So we created Tesla, a female gunslinger working on all kind of weaponry. 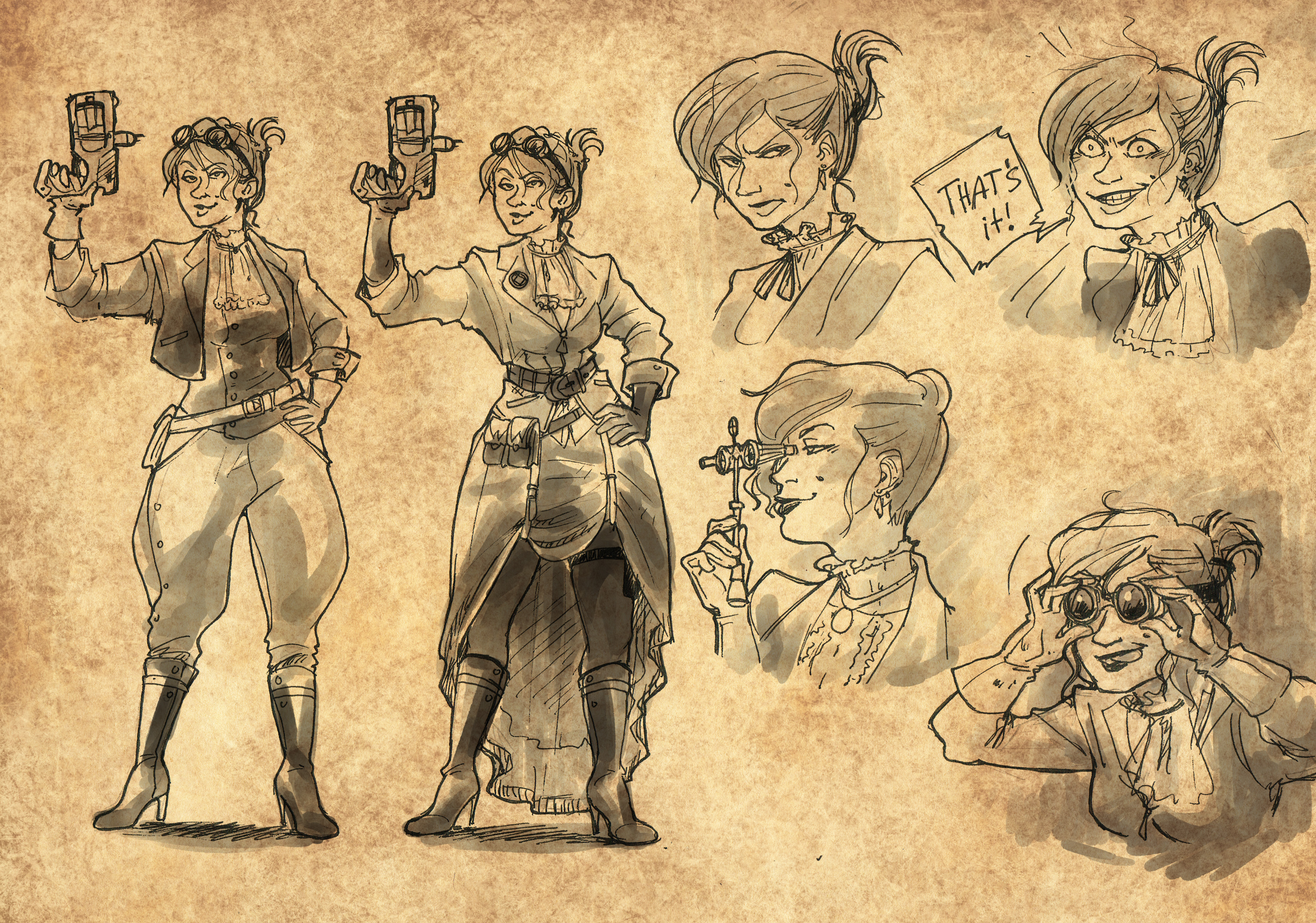 Our artist back than worked in Blender and Z-brush so already all houses and assets that were created for Glasses were in 3D. Up to this point we totally didn't use that but wanted to, so we got ourselves Unity4 and created the second version of Glasses in all its glory. 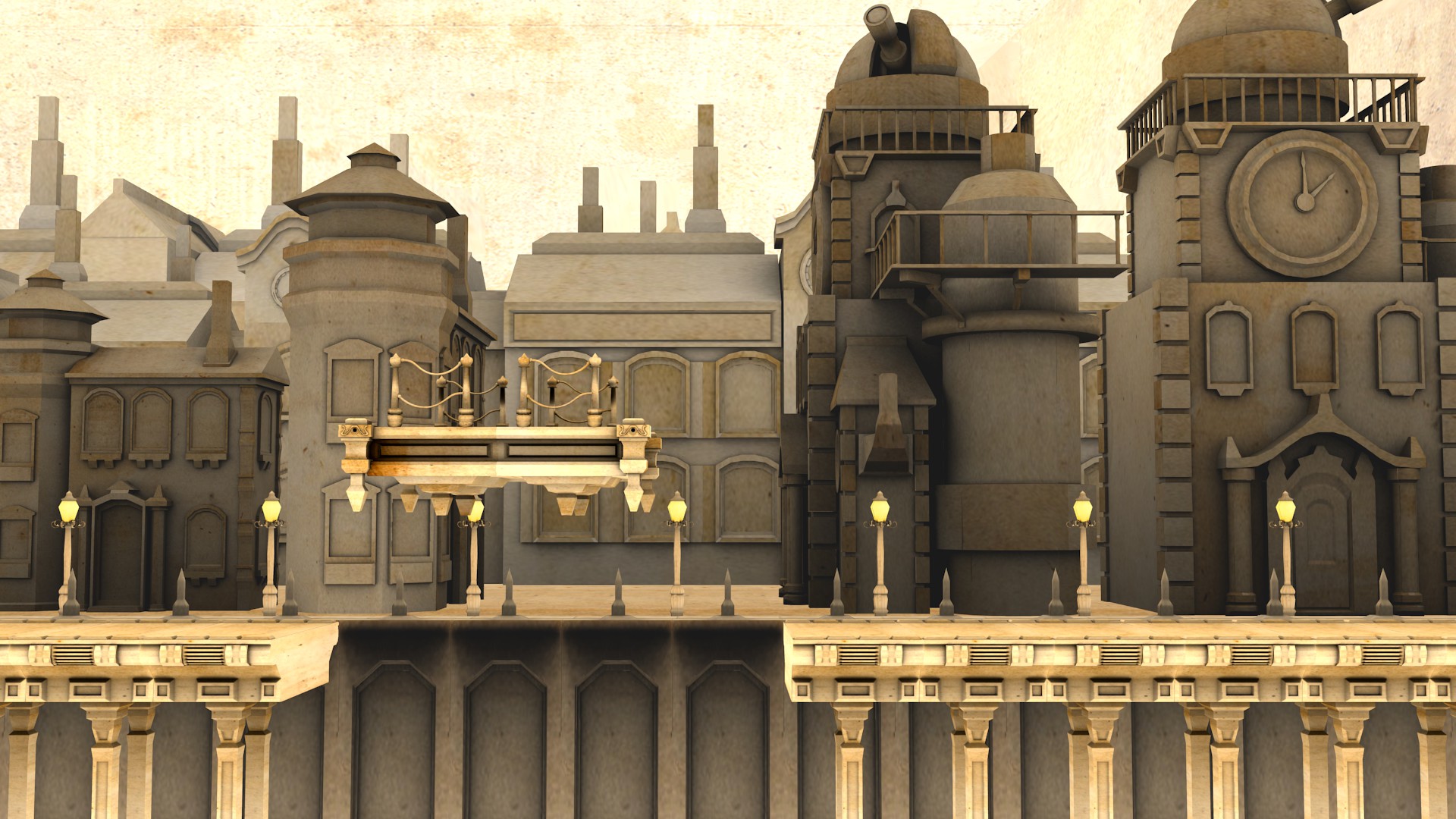 As some of you may see, one of the problems we had starting out with unity and building the levels for real in 3D were textures! Until the first levels in the new Glasses we had built every level with 2D sprites.

But since we were eager to show the game to people we decided to go with a simple solution: make everything look like cardboard and just play around with the tint colors a little bit :D.

So as you can see, we did that and proudly showed the second version of Glasses around, and the reactions were ... bad... but not as bad as from the first version (yay for little success!).

In between all the bad feedback and responses we got, there were little sentences that started with "but i like...".

The "but i like" sentences turned out into success for us as we were able to win a little rate-free loan in a local program that is specially designed to foster newcomer game studios. Motivated and hyped by the loan we changed the name from Glasses to Goggles and started over with all we had learned so far.

Yep, you read that right. We went from creating a 2D mobile runner to a 3D local coop multiplayer brawler.

First we started out by coming back to the first question we heard all the time:

Why can't i move to the sides ?

And we thought, hell why not, we already have a 3D world. So lets be free and move sideways! We stuck to the idea of creating a steampunk world that can be explored by wheelchair and added everything that was good in the second version of Glasses. We added enemies consisting of different steampunk robots, and most importantly, we made textures and the game became much more colorful. 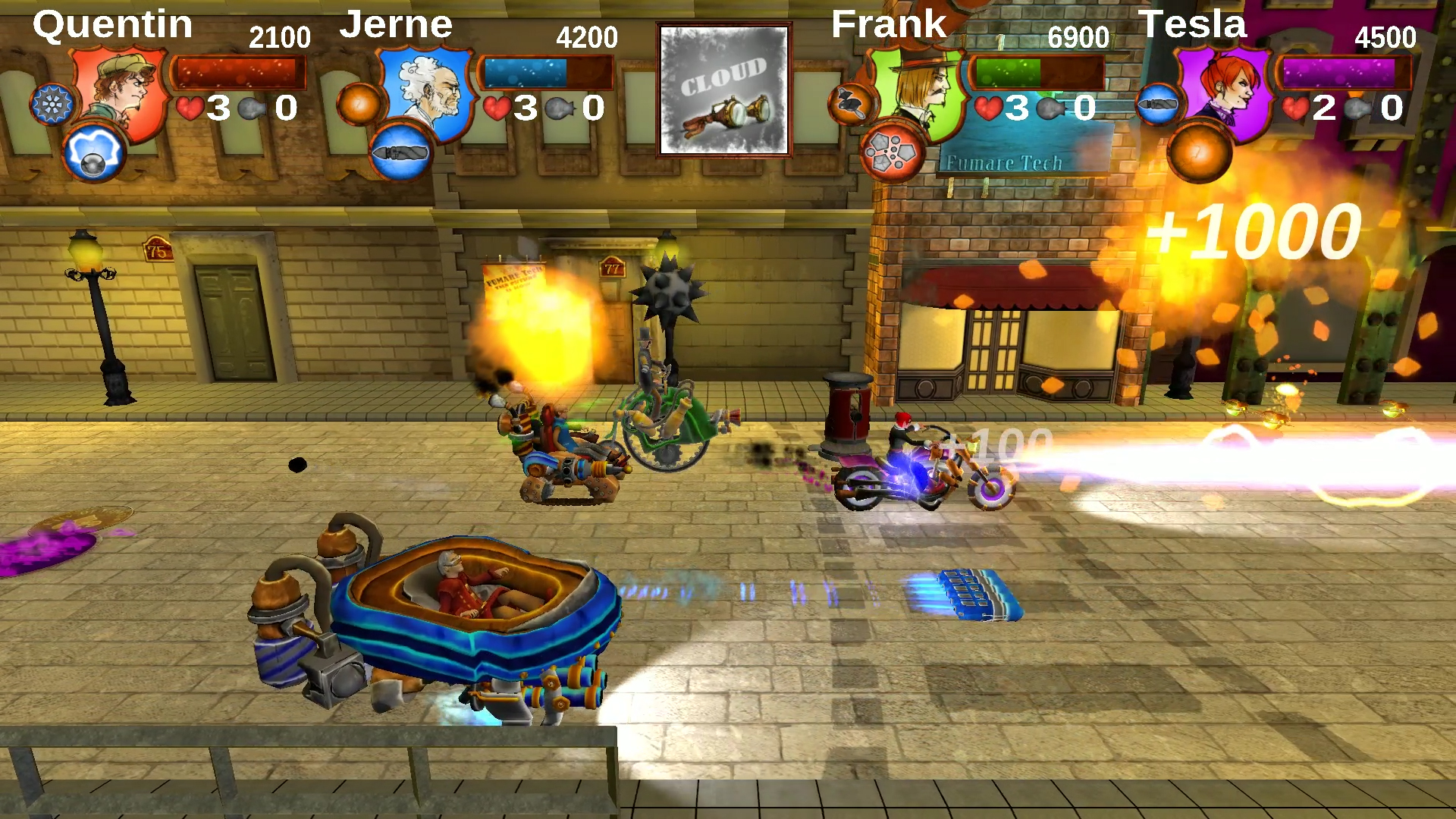 The multiplayer part came to be after we had the first level up and running and Quentin moving through it in all directions :D. Again we were so proud of it, but since we had been two times before, we showed it very cautiously to people. The feedback was... good ?

The feedback was good ! People really started to enjoy Goggles! That feeling was incredible.

We were happy, but still had a very long way to go. One of the new big complaints and questions we got was: "Can i play this with a friend ? That would be so much more fun." And simply spoken, we said "yeah, why not". And so the multiplayer part came to be :). 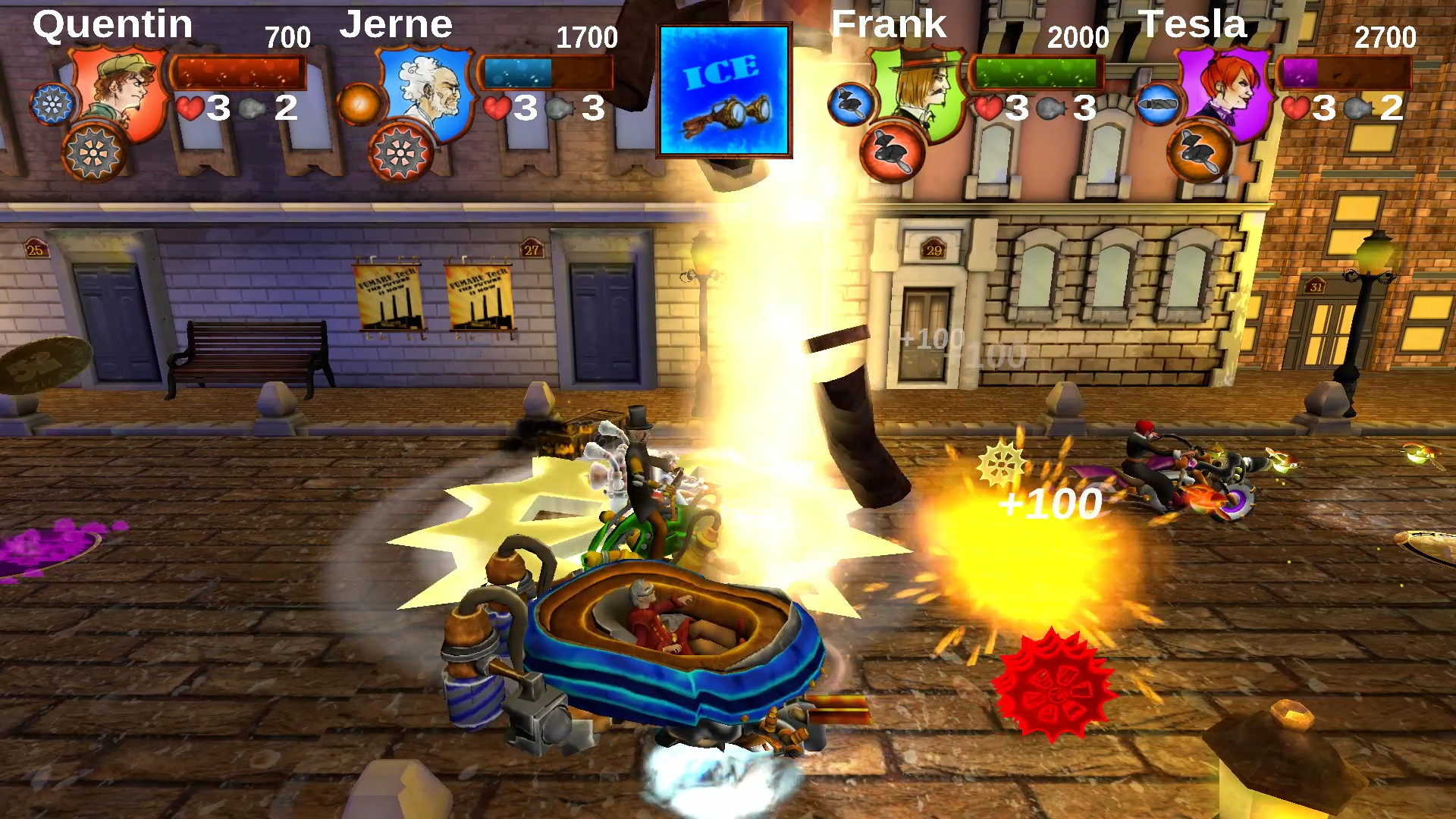 After we added the multiplayer mode we went back a step and were reminded that we lost something. The goggles in Goggles and the idea of seeing something different was no longer in the game.

So we created the idea of having parallel universes and dimension rifts in the game that opened up secret paths and hidden ways in the level by driving through dimensional rifts, that could only be seen by using different Goggles. 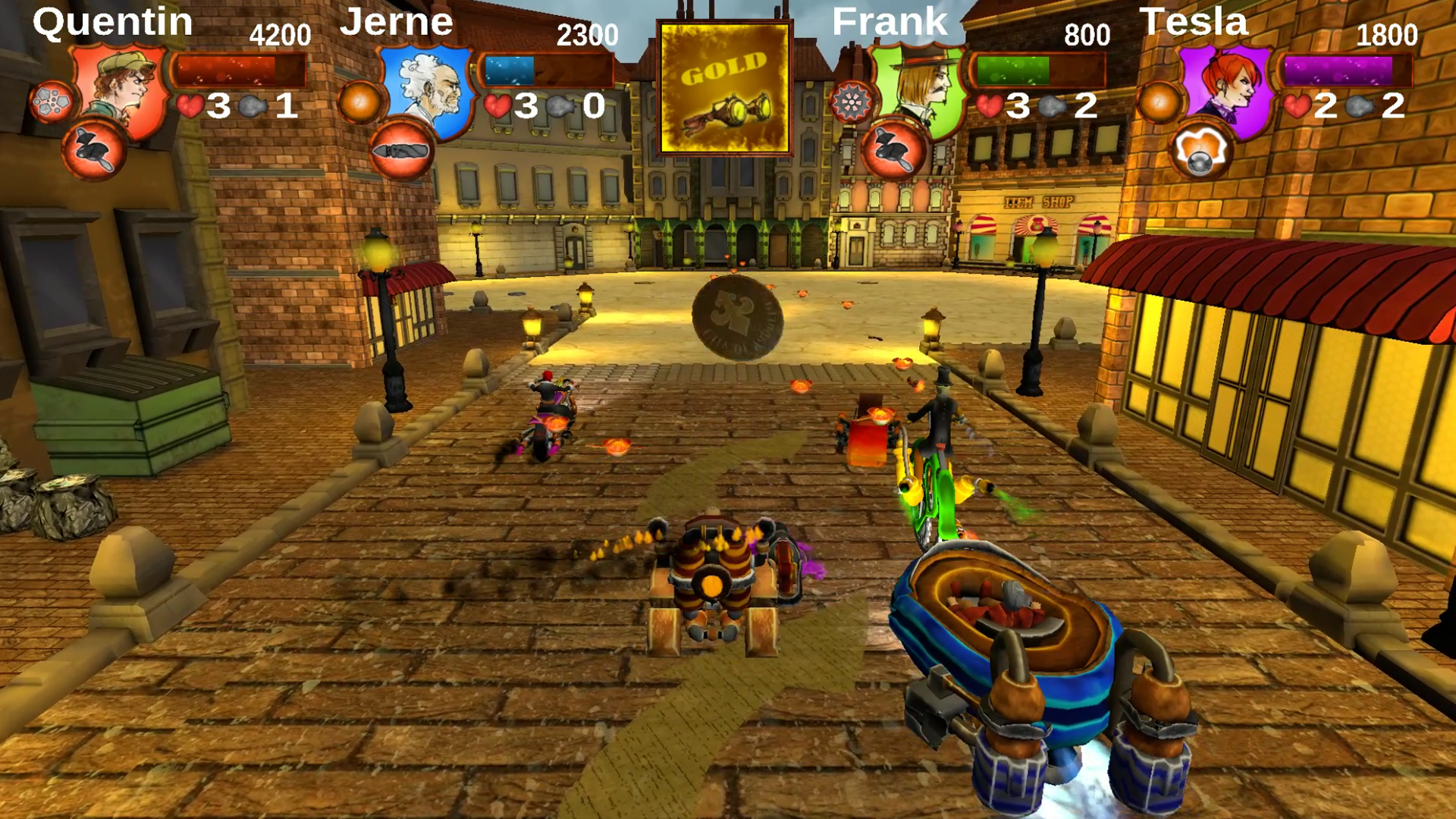 Screenshot from inside one of the shadow rifts.

The gameplay worked and people started to enjoy Goggles in multiplayer so we tried our luck and started a Greenlight entry for Goggles. Here you can see our video for the entry:

The response on Greenlight were not half bad and we made it up to 53% when we decided to step up Goggles up yeat another level...

We went back to our sources we got a little funding from in 2013 and applied again, this time with a trailer for the game and the Greenlight entry in our pockets. We were successful and were also able to find an investor that believed in our ability to make Goggles even better in its next version.

First we started working on the initial main idea, the Goggles and the shadow rifts.

The shadow rifts became the new main gameplay and story element. Up to 4 players try to close them while fighting against the machines of our world "Vaporia", that have become evil after being tainted by the black shadows that are oozing through the rifts.

Next to that we had some money at our hands that we spent to get reinforcements for artist and coder sections. The results were a much more advanced artstyle, more enemies, prettier and bigger levels, so all in all a big improvement over the 2D mobile runner we started with :D 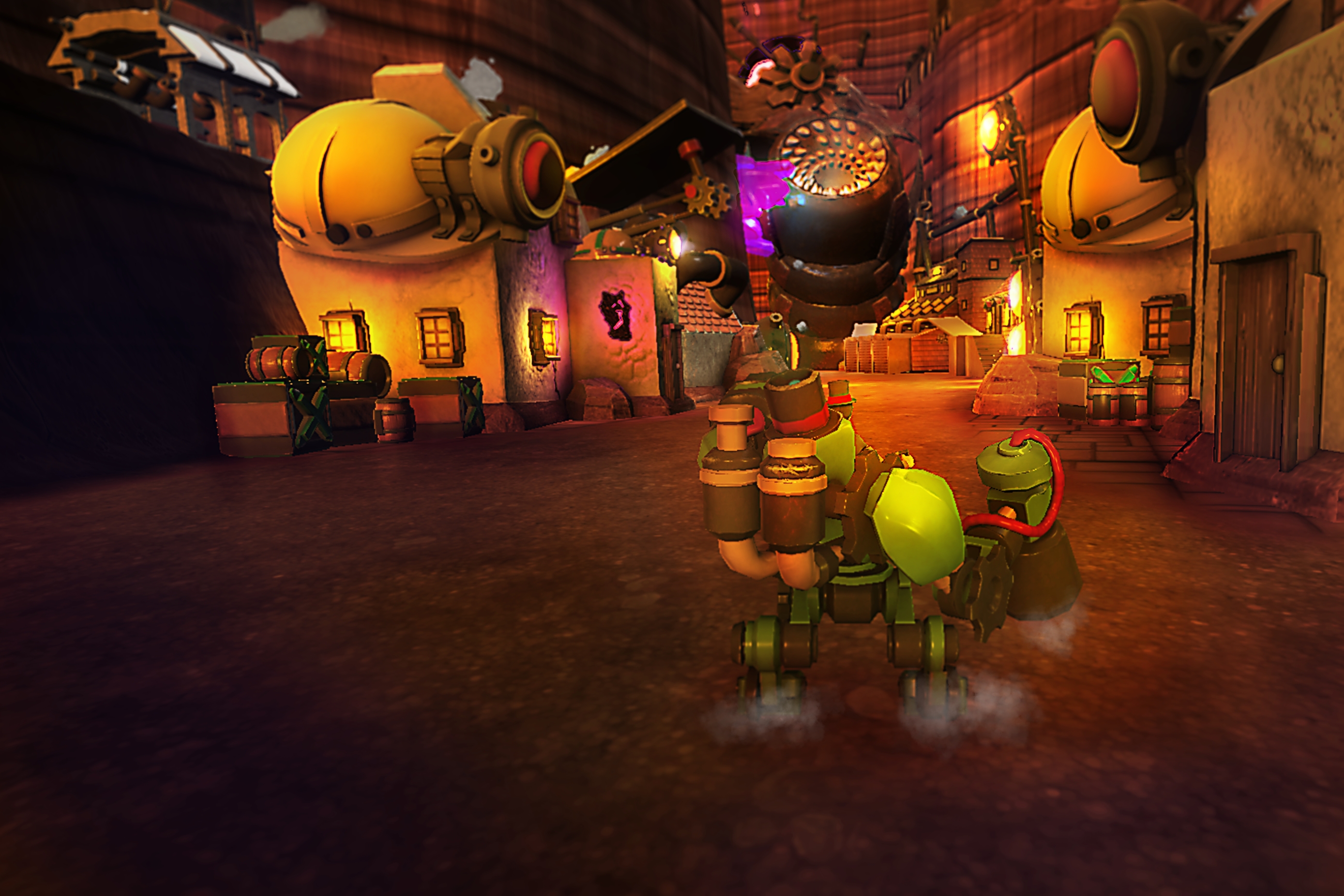 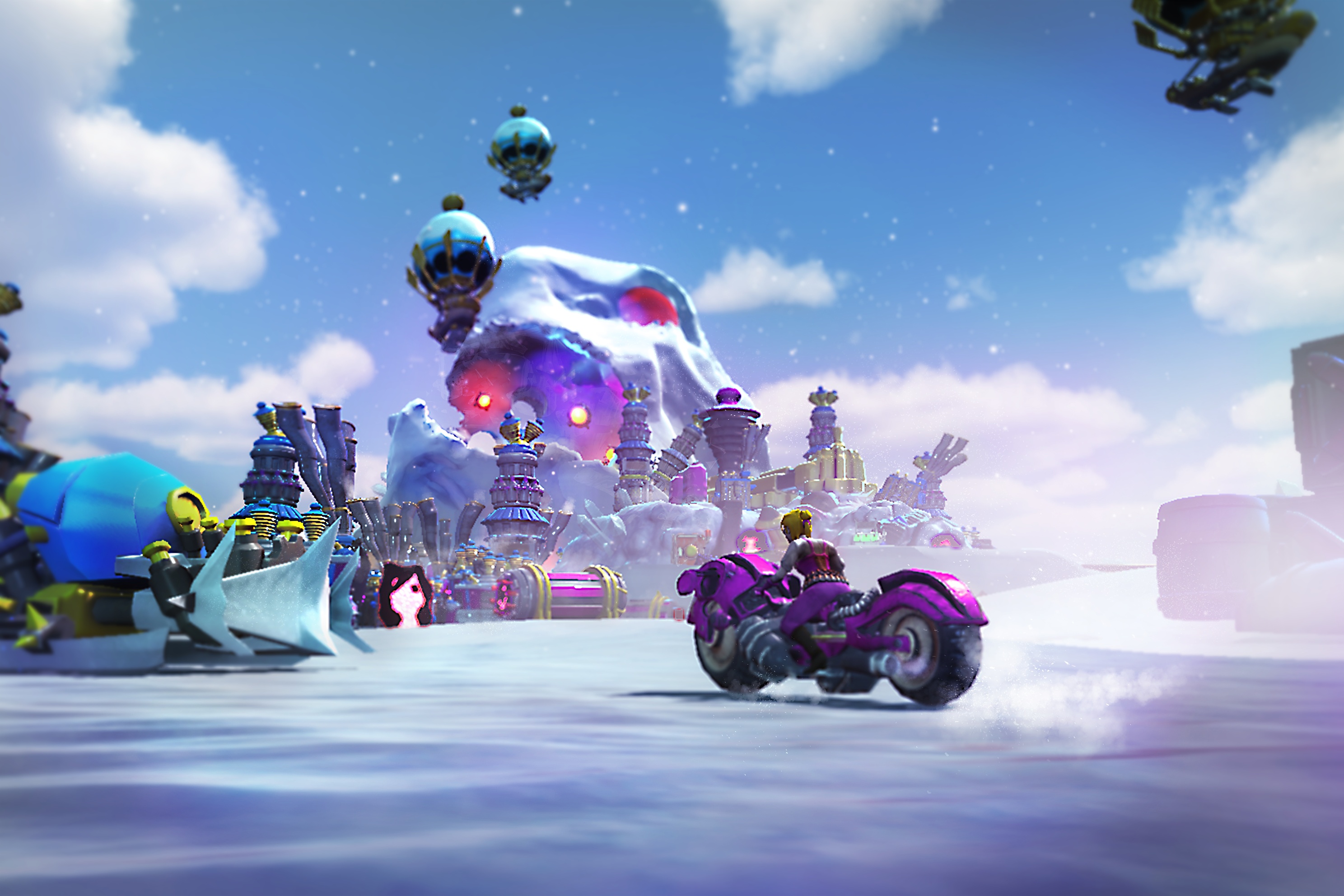 Screenshot from the "blue district" showcasing Tesla o' Tool on her bike. 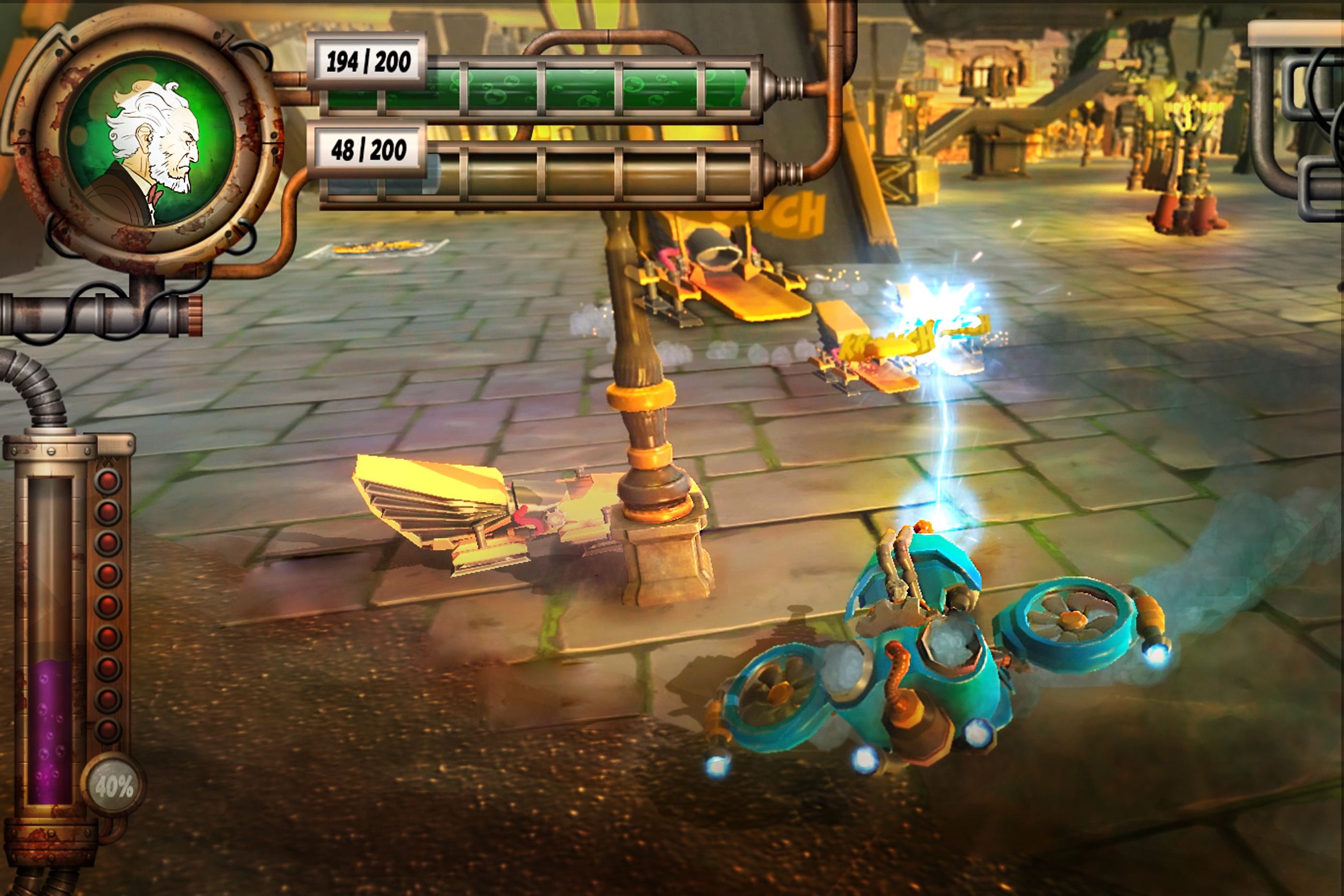 Over all the years, the story of Vaporia (the world we created), changed and expanded more and more and let to the game with all its characters, worlds and levels we know have at our hands.

And this brings us to now :)

We learned a lot and are still learning every day. We once again are very proud of our work (but still very cautious because we know what proud can mean regarding feedback ^^). If you were reading all of this, thanks in advance for your time! We have been growing a lot on Goggles people checking it out means lots to us.

There is a website for Goggles at Bit2good.com and after our first run on Greenlight last year, we started another try with the new improved Goggles which can be found here:

Trailer for Goggles - World of Vaporia

Thanks again for your time and lets see where Goggles will take is in 2016 :)

Awesome progress! It's amazing what a bit of money can do!
I love the current video and the full 3 dimensional freedom. Looks like a lot of work and a lot of fun!
Keep up the hard work