Casey discusses a feature of Jump Tanks that helps to keep each play fresh and exciting!

This week we'll go over one of the key features of the game: the "Dynamic Arena" system. At its heart, Jump Tanks is a competitive, arena-based, multiplayer action-rpg shooter. This means that players will be battling it out in a series of different arenas for which they'll devise optimal strategies over time. 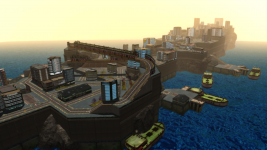 The Dynamic Arena system allows us to randomize the certain aspects of the arena for each match and we can randomize spawn points, walls, traps and hazards, enemies and shortcuts, even access to areas of the map! The changes to maps offer unique strategic opportunities without making it too difficult to learn the basic layout of the maps. Some examples of how this might affect gameplay include using a large crane as a sniper spot, avoiding a favorite hiding spot that you might normally use to recharge your Armor, but is now inhabited by enemy npc turrets. You could also make a daring getaway across a series of barges that are present during the match.

This system will allow us to keep matches feeling fresh and exciting after hundreds of matches.
Lets take a look at some specific setups for the current maps we are testing for the game.

In the map "Sebone", the sea level is randomly decided before each match. When the water level is low, docks and other areas to hide are accessible; however, when the water level rises the middle section of the map and some roadways are flooded, creating deadly hazards.

In the map below the cranes and barges are randomized. The cranes create great points to jump off and crush opponents or snipe from. The barges can be used to hide on and recharge your Armor or as a shortcut across the map. 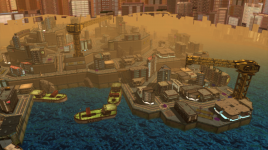 Like what you see? See something you don't? Want to comment or contribute ideas! We love input and read the comments often... when we have comments to read. So please leave us comments! I promise the comments aren't booby trapped.. yet! 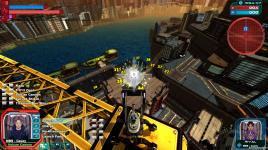 It's really cool how much work you're putting into designing the levels.
Looking forward to seeing where it goes.

Thanks for the comment Beradical, glad you like the levels! We look forward to sharing some of the other ones we have in development over the coming weeks.