Today we are showing a few of the Lend Lease and captured vehicles to feature in the upcoming Eastern Front update.

Today we have a few screenshots of some equipment that has been provided by allies or stolen from enemies. But before we begin, we have a short message.

We are always looking for more help. At the moment we are particularly in need of people who can do animations or sounds, however if you think you can help us in some other way don't hesitate to apply. More information on the application process can be found here. 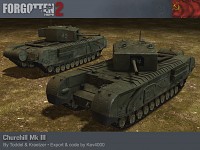 Within 3 months of the start of Operation Barbarossa, the first British aid to the Soviet Union had been delivered. The Arctic Convoys carried aircraft, raw materials and tanks. Starting in 1942, the Soviets were provided with 301 Churchill tanks, of which 43 were lost before they arrived. Trials conducted with the newly arrived tanks showed mechanical problems, and the opinion of these new tanks was low. 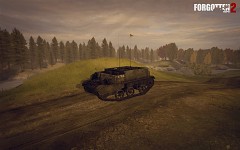 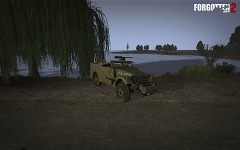 The Soviets received 2008 Universal Carriers from Britain and Canada. They were primarily issued to scout and reconnaissance units. While they were provided along with Bren guns and Boys rifles, these were often replaced with domestic weapons. About 3300 M3A1E1 Scout Cars were provided to the Soviets. This was a modification of the standard design, fitted with a Soviet made Buda-Lanova diesel engine. They were used as reconnaissance, command and prime mover vehicles.

In most cases the vehicles recieved kept the paint schemes that they arrived wearing, with Soviet identifying markings added on top. 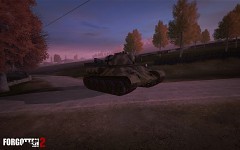 The Germans captured a great number of T-34 tanks during their advances into the Soviet Union. A great many of these were pressed into service, both before and after receiving modifications (most usually fitting cupolas from damaged Pz III or IV). Since using the same shaped tank as the enemy is a risky move, the T-34s were painted with many large visible crosses.

This is just some of the new captured and lend lease equipment in Forgotten Hope 2.

We are now accepting entries for the week of September 29th. If you think you have the best FH2 screenshot, post them here.

So when is FH going to develop a stand alone game?

There's so many awful games in Steam early access, if theres one mod I'd love to see go indie is Forgotten Hope. That would be fantastic.

Along with Desert Combat, Forgotten Hope was one of my favorite mods. It's unfortunate that the mod's player base is withering away. Barely anyone plays FH anymore.

They could port all their content to another engine like, UE4 and make something epic, but Id hate to see the mod die from the switch, perhaps a 2nd team can start work on a standalone release :D :O

In all honesty, no one really plays the mod unless there's an event scheduled or a update released. If it was standalone on Steam then it'd sure be popular.

That's not true, the 100p server is regularily full every evening European time.